I showed you my Neo-geo MVS 1 slot motherboard in my last post which is pretty awesome! And one of the awesome things about it is the MVS system produces stereo sound from the motherboard. Normal JAMMA games are mono only, but Neo-Geo broke the mould a bit by adding in a second speaker into their MVS cabinets and gave all us geeks stereo. So if you have the corresponding connection and cable you can have 2 speakers wired up and get some left to right speaker action going on!

My Supergun is wired for Jamma Mono as it's wired to the JAMMA standard except for the controller ports, so an option to have stereo sound from the MVS motherboard is pretty cool.

There's a problem though, the stereo connector on the motherboard isn't just a coax jack or anything as simple as that. Its just 4 pins, and that's it. What do you do with that if you don't have an MVS arcade cabinet that has all the required wiring inside it to set up all the stereo etc?? You make a connector that's what you do! haha

Well I couldn't think of how wire up a phono jack to it off the top of my head but one saturday morning last month I woke up early with a brain fart! I must have been thinking about the 4 pins in my sub-concious because I woke up with the idea going round my head that a floppy disk power connector from a PC PSU might fit that kind of 4 pin arrangement!

I jumped out of bed and went to our hobby room and stared bleary eye'd scrutinizing the 2 FDD connectors on my spare PC PSU. I got the MVS motherboard out of its box and offered up the connector...... it didn't fit! Dang it! It was really really close but the pins wouldn't go into the connector. Trying not to be disheartened I tried the other connector on the PSU just to eliminate all the options and guess what? That one fits!!! :D

After quickly getting dressed and brushing my teeth I was off to the kitchen to where my soldering stuff is with my MVS manual in hand.

Looking at the MVS boards wiring diagram it shows the stereo jack being wired : pin 1 +, pin 2 -, pin 3 -, pin 4 +. So pins 1 and 2 are the left speaker and pins 3 and 4 are the right speaker. One of the nice coincidences with the wire colours on the FDD connector is the 2 middle wires are black which is a ground colour for me. So it will be easy to make sure pins 2 and 3 are going to be ground or speaker negative.

Here is a photo of my parts and the schematic in the background. 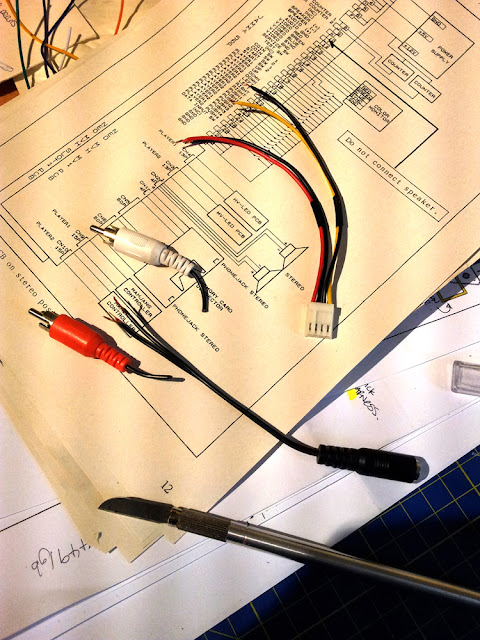 The red and white stereo ends are from the donor coax to phono cable I had lying around. I snipped them off and the idea is to solder the phono connector to the FDD cable. This will then be the stereo connector for my MVS.

I seperated the 4 wires on the phono cable and made them right and left and trimmed the insulation off the wires and tinned them. I put some heatshrink on the wires to insulate them once soldered. A quick touch with the soldering iron and all 4 wires are soldered together. 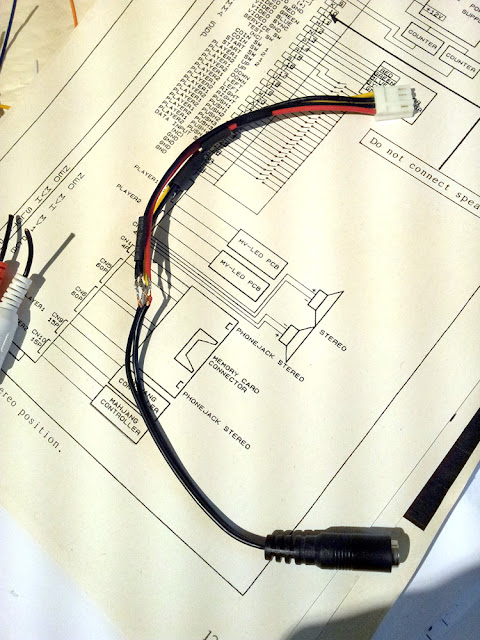 I quickly wrapped some electrical tape around the solder joints and went upstairs to check it all worked and ding ding! Stereo sound coming out of the MVS! YES!!

I unpeeled the electrical tape, slid the heatshrink over the solder joints and gave them some heat from the hair dryer and bingo bango, I had a completed stereo connector and can now enjoy my Neo-Geo games in glorious steri-eri-ooo.

Here is the new connector and speakers hooked up. 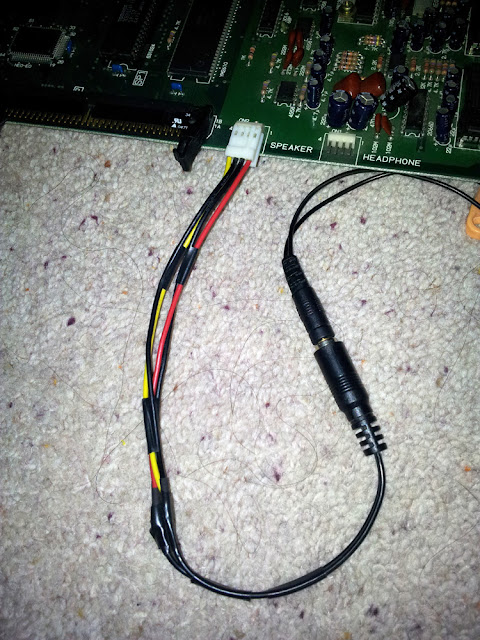 And here is the finished cable on its own. 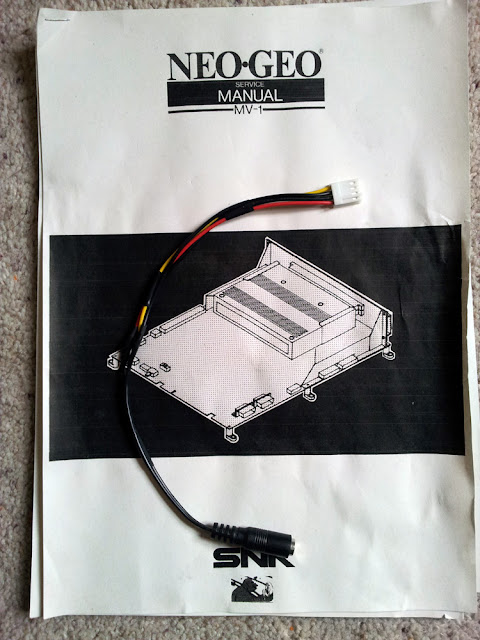 It's a very easy cable to make and I recommend it if you have an MVS motherboard that has the stereo connection option on there. Its just a matter of getting hold of a donor phono jack and a spare floppy disk power cable from an old PC PSU and your sorted. :-)

Catch you later yo for the next thrilling installment in the 'making your own arcade cables'!! :-P

Back in the day I used to go to a local video shop to spend my pocket money on the arcades there. After a short while of them having a single Jamma arcade ( I know now that it was jamma haha) they got in a 4-slot MVS machine. It was the first time I'd seen a Neo-Geo and the fact you could choose between 4 games was amazing to me at the time! It was the first time I'd played Fatal Fury, Samurai Shodown, World Heroes, Alpha Mission 2, Soccer Brawl, Puzzle Bobble etc. That machine ate so much of my pocket money it was untrue!

I used to love reading through C&VG and Mean Machines magazines and checking the latest Neo-Geo games in there and then hoping they would turn up at the video shop. And more often than not they would eventually end up on the game selection and I would be one happy geeky teenager.

About 7 years ago I bought a Neo-Geo CD and finally got some Neo-Geo action at home. That was a very happy day I can tell you haha. At last I could play real Neo-Geo games at home like Fatal Fury - Real bout, Samurai Shodown Spirits ( 3 ), Viewpoint (AMAZING), Mutation Nation and Last Resort. The real deal but the loading times really took the arcade magic out of the experience :-( I love the machine but its not the experience I had when I was a kid.

Trouble is, to get the home experience of the Neo-Geo I would have to rob a bank to afford an AES. A couple of hundred for the console, which does look amazing! And then a couple of hundred pounds for each game. I really can't afford that. So it seemed I would never get to play the real Neo-Geo experience........until now!!! :-D

Because I've made my own Supergun I can now get an MVS board and play the actual arcade games on my TV.

I went onto ebay and sourced myself an MVS MV-1F 1 slot board for a steal and excitedly waited for it to turn up at work. The MV-1F is a large board compared to the later MVS boards but it has built in controller ports and also has a Stereo / Mono switch which allows you to have stereo sound if you have the right adapter. And its also Jamma compatible and the way I wired up my Supergun it should work perfectly fine. 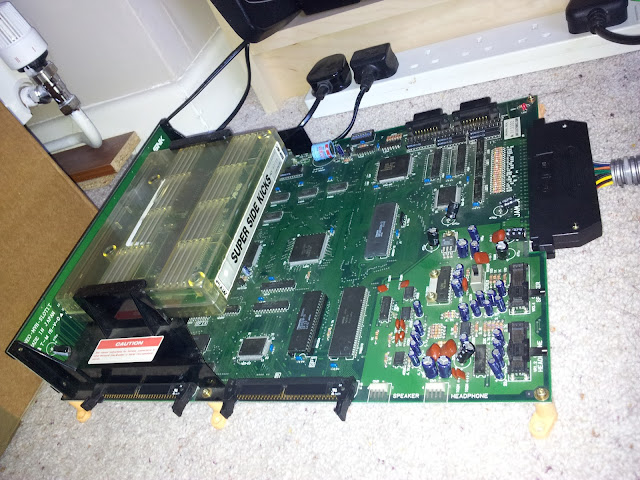 The only shame in a way is that the game that came with it is Super Sidekicks and I'm not the biggest fan of football but at least I can try out the board and check it all works.

One of the first things I noticed is how big the cartridges are!! They are massive and they are the first cartridges I've seen with 2 boards in them. Check the following photo to see a comparison with other well known games cartridges. 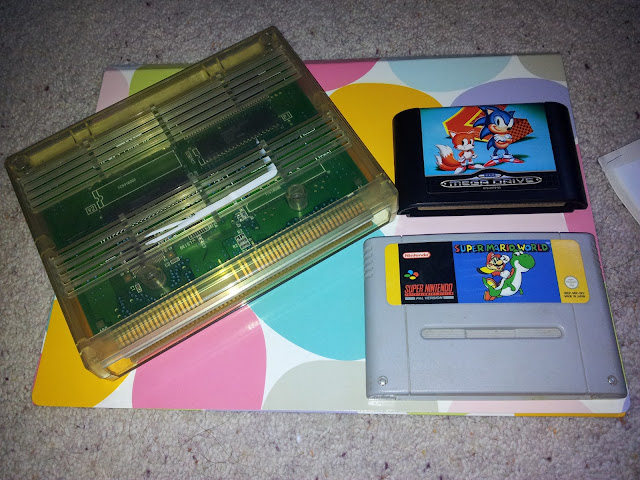 Check out the size of that sucker out!!! :-O That's the difference in the real arcade games and console ports.

And here is the screen I was hoping to get when I turned it all on. 330 Mega Pro-gear Max! Woop!! 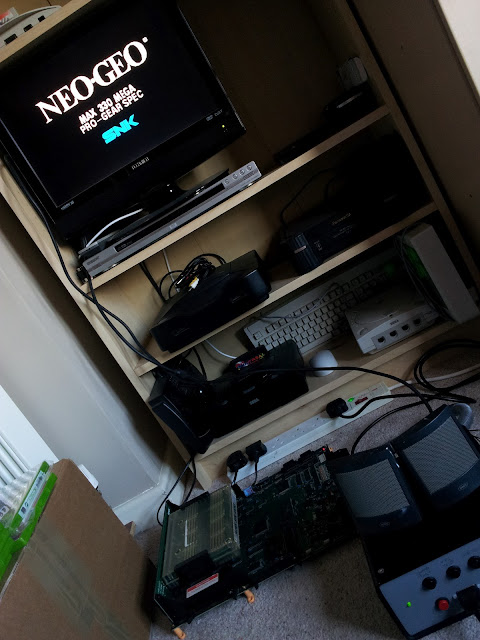 I can now get my hands on the real MVS arcade games that I played in my youth!! And at a fraction of the price of getting an AES. Those games go for hundreds of pounds where MVS ones can go from £10 - £60 depending on how rare they are. Some are a hundred quid but those are super rare and I won't be getting any of those haha.

The first game I sort out after getting hold of the MVS board was Soccer Brawl! Yes, another Soccer game on the MVS but this one is in the future!!! You have power armour shoot lazers and have super powerful special kicks. That's more up my street and a real favourite when I was in the video shop. And to prove the price point I got it for £12.50 including postage. £12.50 for an arcade original !!!! The game on Neo-Geo CD cost's £25 - £50 and that's with looong loading times. No way hosey, original arcade games for me! 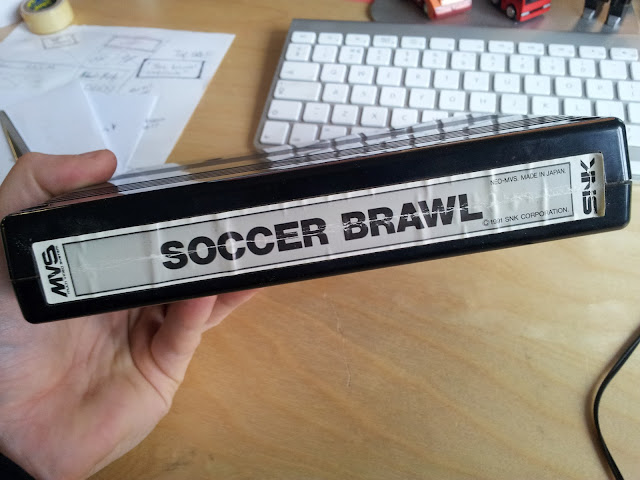 If you make your own Supergun or buy a Voltek one that's made to run Neo-Geo's then get yourself an MVS board and get hold of some absolute classics at a fraction of the AES price. It's definetly worth it :-D

I've uploaded a video of a little tour of my Supergun hooked up to the MVS running Soccer Brawl. It also show's my home-made Stereo adapter which i'll probably write a quick guide on next.

I also did a quick vid of Samurai Shodown starting up when I got it from a forum member over at arcade otaku. Another steal at £10!

Check them out and catch you guys soon. I'm off to play some arcade games woo!!