Been a little bit of a break between posts again I know but not as long as it has been in the past haha. We've had a chock-a-block-a couple of weeks and I'd been struggling to get some time in on the Naomi project with helping to setup for summer concerts (indoor and outdoor) practicing for playing in the concerts as well as helping to organise our wedding and our stag + hen do activities. So getting to posting some updates has been a little tight like a tiger. But! Hopefully we have a nice couple of weeks of summer holidays now and a more leisurely pace.

Well, As you probably read in my last post I had a real lemon of a monitor in the Naomi, and from some reading around on the forums I frequent I think it had been a problem for the owner at least a year before I won it on eBay. Bit crap really but I guess that's why I ended up getting it so cheaply. Anyway, nothing to it but try to get the sucker up and running.

So at the end of the last post I had my Naomi up and running via my Dreamcast and had a great time playing some Street Fighter 3 : double impact and Giga Wing. But the pin cushion controls weren't working so you couldn't get it to full screen without it pinching inwards from the sides quite a lot! Pretty annoying and obviously another fault on the chassis.

Well, the chassis lasted until I played on the machine again after having a good nose round it. It started looking like it wanted to scroll and then POP the line came back. I guess some parts of it gave up the ghost, again. So back onto the repair dude for thoughts and ideas because he'd been slowly eliminating problems as he went with my chassis.

Because I'd replaced the transistor already and it had gone again it had to be something else and Grant started thinking it could be a faulty Yoke or fly-back. Well I know what the parts of the monitor are now from doing research on them for the Naomi project but haven't got the first clue with how to diagnose and fix them. So off my chassis went again down south for Grant to do some more inspections and to soak test the chassis again on his spare tube to see if it would hold out. And if it did that would mean that I had an internally sparking Yoke or something.

I had a nose around the Yoke area after I sent the chassis off and found a piece of plastic that encloses some copper wiring was loose and flapping about so I mentioned this to Grant and super glued it back on. He said that this wouldn't be the problem though, so I glued it up so that it should help stop moisture getting into the Yoke area through that avenue. 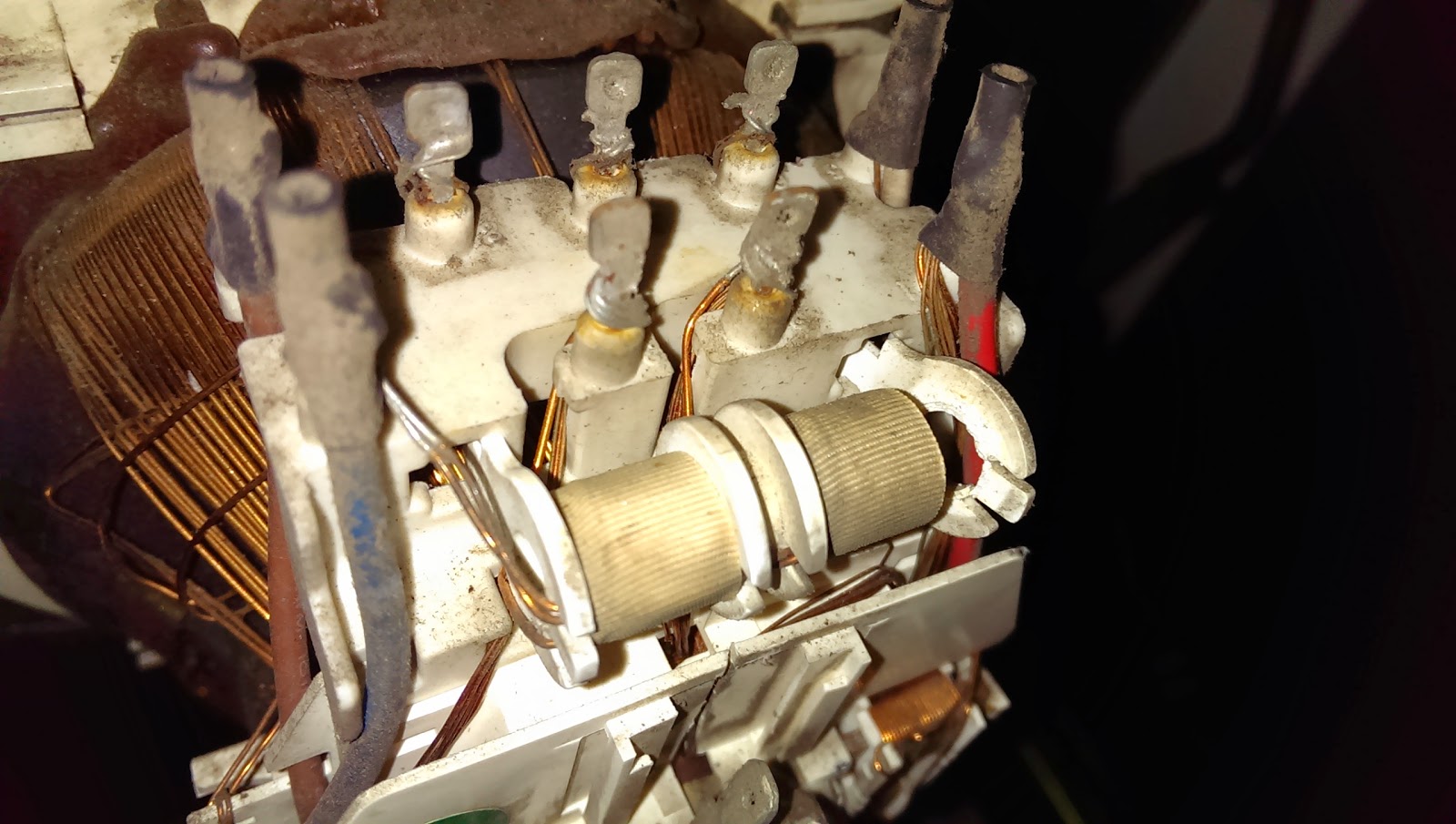 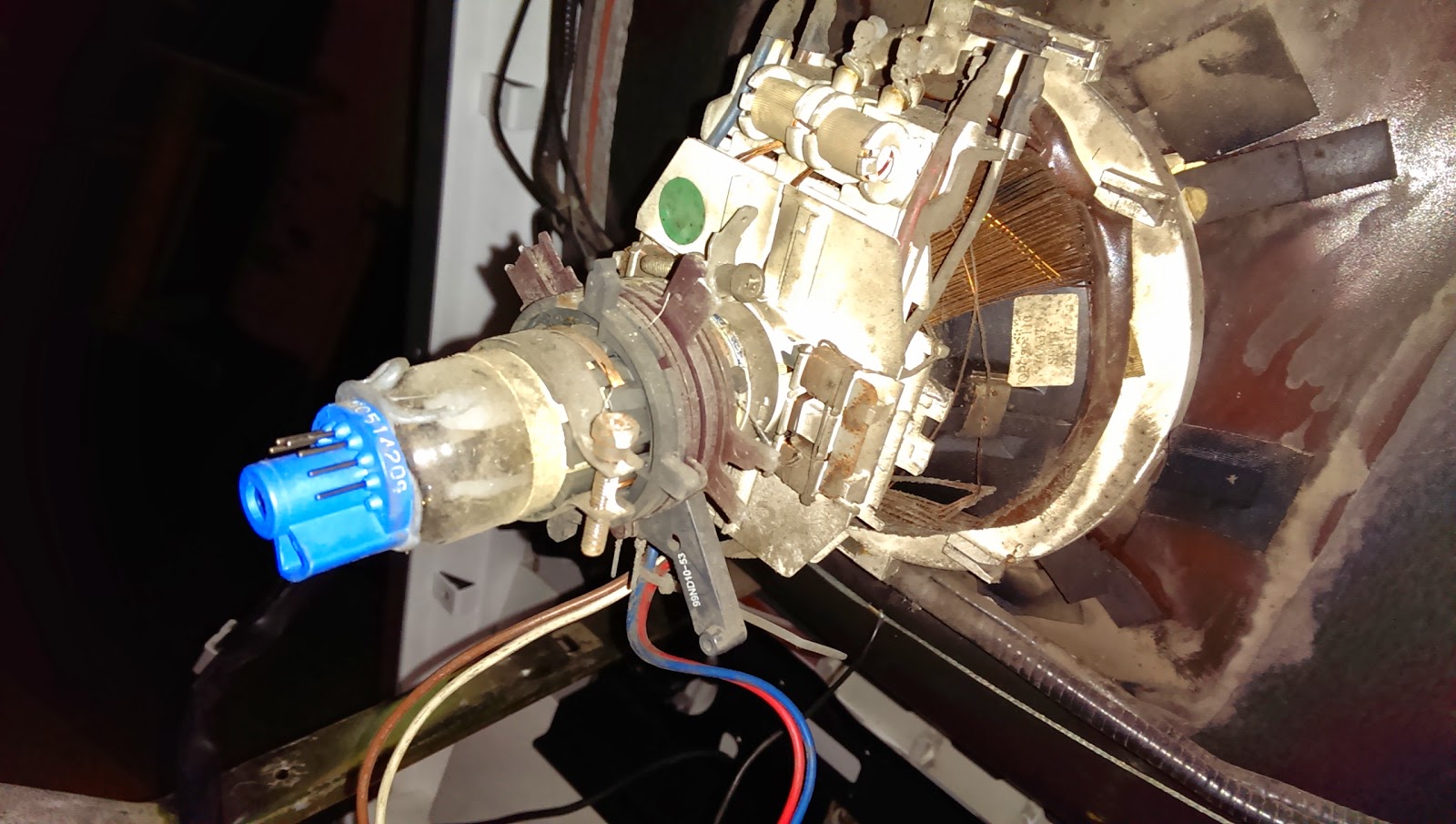 The coiled up copper wiring on the white cone is the Yoke area. It was absolutely filthy around this area so I gave it a good ol' clean down to see if anything else looked a little suspicious.

The chassis was posted off and received and I waited to see how it would hold up to Grant's tests and started trying to do some internet research on getting hold of Sanwa 29" tubes or even worst case senario, 29" tv's to sub into place. Both lots of research basically came up bust though and it would seem I would need to drop a couple of hundred on a complete monitor and chassis if it show's up as my tube is faulty as spares for them seem to be non-existant anymore. :-( 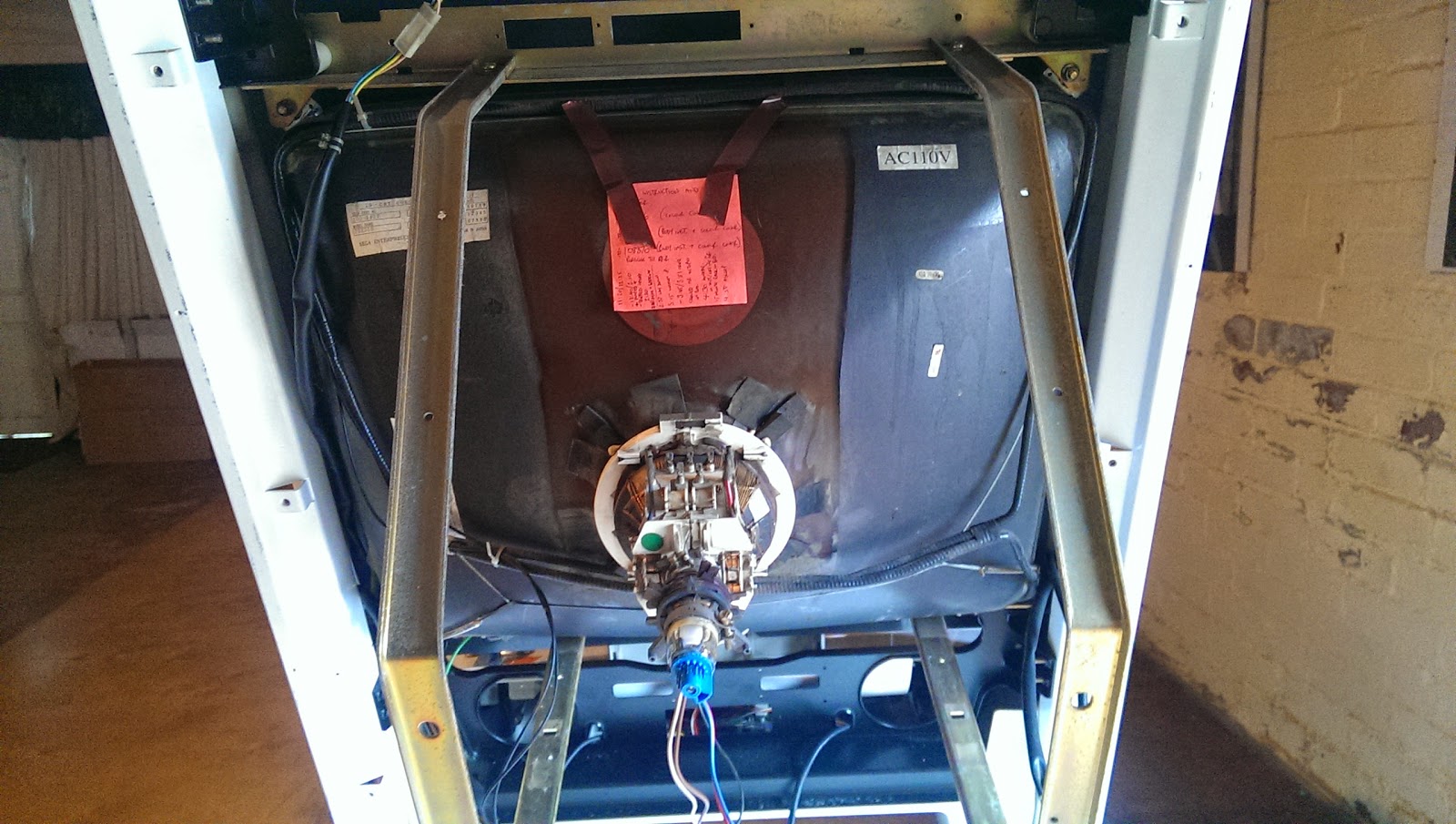 The weekend comes and I get a PM and its good news, well for me. The chassis popped again on Grant's spare tube within about 20 minutes. This ruled out my Yoke being the issue which made me have a huge sigh of relief!!!

And with this happening it got Grant's head scratching again and he would have to really start delving into the chassis. This could take a while, so awesomely! This is a true example of the Arcade scene's helpfulness and friendliness. He offered to send me his spare working, repaired chassis to use while he spends some time diagnosing and repairing mine so that I have a Naomi to use and play on while he gets into the nitty gritty with my faulty chassis. What a dude!! :D

So while I waited for the spare chassis to arrive I started working away on my Mame PC setup. I've played Mame before on my desktop PC but I've never set up a machine just to play Mame on an arcade machine before so I had to do a lot of reading up on what to use and how to set it so that the resolutions are fixed so they don't damage my fragile monitor and so that there isn't screen tearing etc. The last thing you would want is to give the game away that it wasn't running real arcade hardware inside with crappy looking screen tearing!

I follow a guy on YouTube called Exmosquito who does 1CC runs of some of the hardest arcade games and he runs Mame on his arcade machine and thankfully he did a video a while ago explaining his Mame setup. It looks like it runs absolutely smoothly so I wanted to copy his setup so I could have a spot on machine.

He uses GroovyMame which is a modified version of Mame and he also uses the CRTEmu drivers which are designed to work on ATI graphics cards. So I set about sourcing all the parts for making up a small PC that would run GroovyMame out of my spares.

Typically I didn't have very many parts left over at all. Since I was a teenager I've been into PC's with my Dad and whenever we'd upgrade parts I would generally keep them as spares incase anything went wrong. And over the years I've kept doing this and whenever anyone's PC's needed replacements I've popped these spares into their machines to help fix them. So when it comes round for me to want to make another PC I couldn't as I've given all the spares I need away! haha blumin' typical!

So I went on the scrounge a bit. I remembered my Brother might still have his old motherboard and processor still from when we upgraded his machine a few months ago so I gave him a call and thankfully he did! So I nipped over to pick it up. A good start! I have a mobo and processor. Next I need an ATI graphics card, which no-one I know has so I sourced a nice looking ASUS Radeon HD4350 512mb Silent PCI-express card that's compatible with the CRTEmu drivers and some memory from the local CEX. Im trying to get this little machine running on the cheap cheap if you couldn't tell. Next thing is a Power supply which is easy as I have my spare modular Corsair HX520w psu which will work a treat. And the final thing, a hard drive. I recently had a PS3 Phat 60GB that I reflowed which lasted for a very short time before it was properly bricked so before I binned it I took the HDD out of that and hooked the sucker up. Perfecto! A nice little Mame PC on the pretty cheap.

I mounted it all to the Naomi wooden board so that I knew it would fit within the bottom box of the arcade machine and it ended up looking like this :D 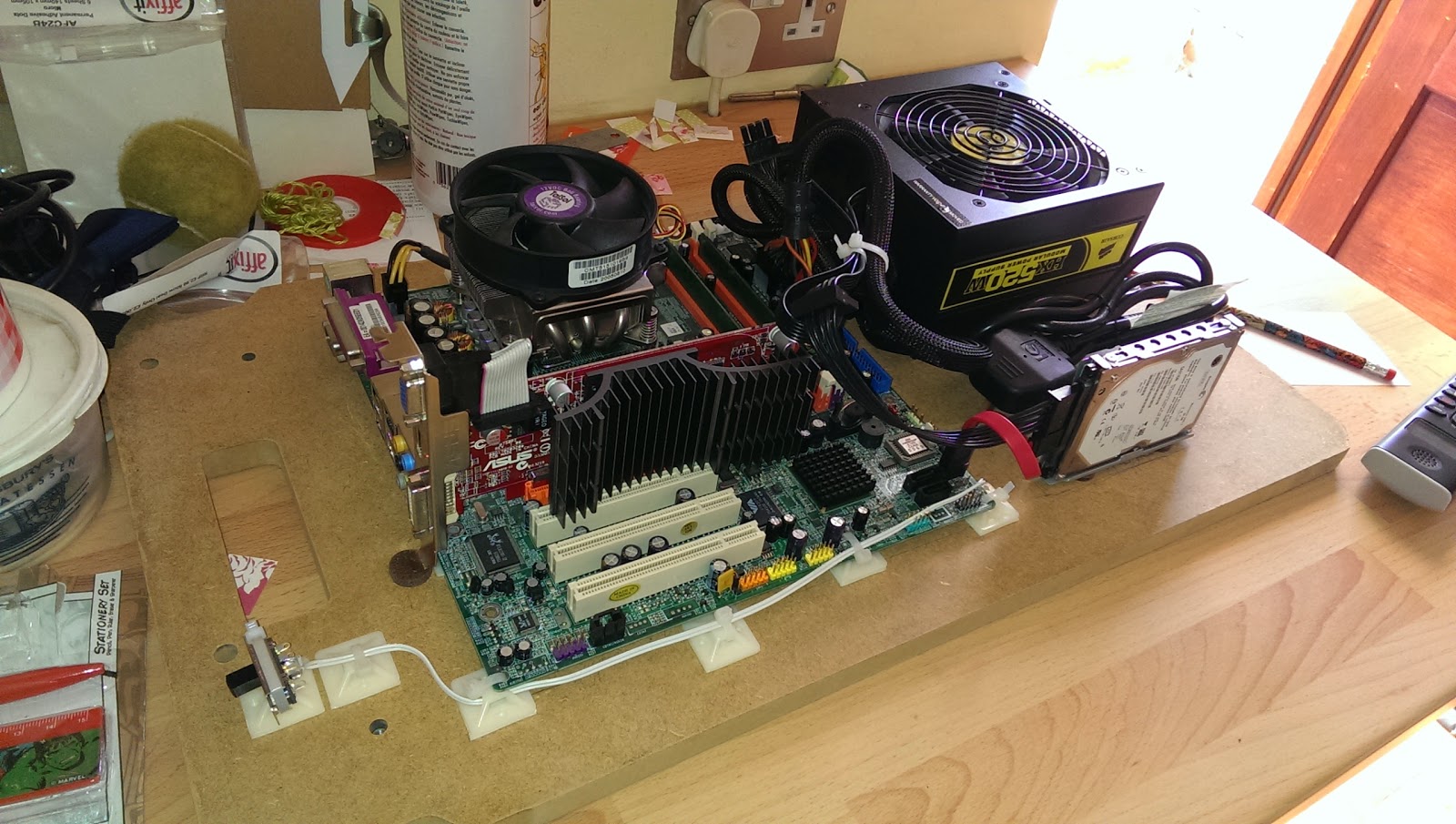 Not too shabby I don't think haha. I set up a switch so that it could be turned on from the front and all the ports are easily accessable from the door of the Naomi and the power cable routes out of the back of the machine.

Next step is to get GroovyMame installed and a load of games loaded and wait on the chassis to return.