It's been a couple of weeks since my last update so I thought I would post up a quick update on the Jamma arcade machine resurrection.

Yep indeedy. I've been over to the machine over the last weekend and finished up the last little touches I wanted to do to it so I can call it done. And its a pretty great feeling to know that I've taken a machine that was basically sitting and rotting broken and unusable and its now a tidied up and rejuvenated arcade machine that can be used to run both Jamma and MVS games. 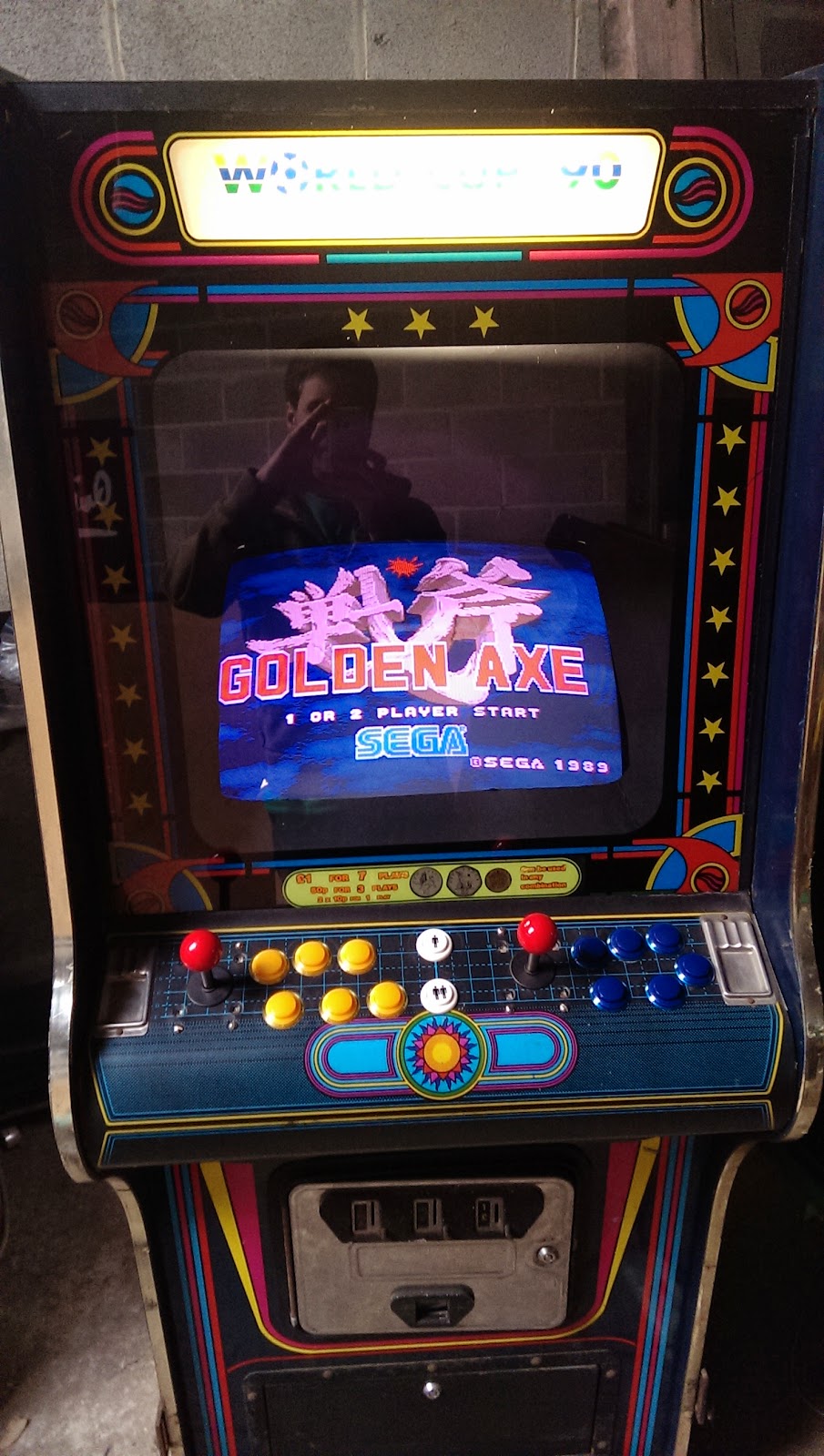 The main finishing touch I wanted to do was re-fit the blackout card around the monitor so that you couldn't see into the machine while playing it and it just makes you focus on the game your playing. When I was removing the card to do the cleaning a part of it got torn so I had to tape it back together.

You can see the join if your looking but Im pretty sure if you didn't know it was torn and repaired you wouldn't spot it. It needed a little trimming and adjusting to get it to fit the new monitor shape nicely but in the end (with some stapling and then re-stapling) I got it to fit how I wanted and closed up the front of the machine and clamped the latches down so its all secure at the front.

On the left you can now only see me and the wall behind me reflecting in the glass rather than seeing straight into the cabinet.


Below you can see a kind of POV of how it looks when your playing. You really just see the game now. 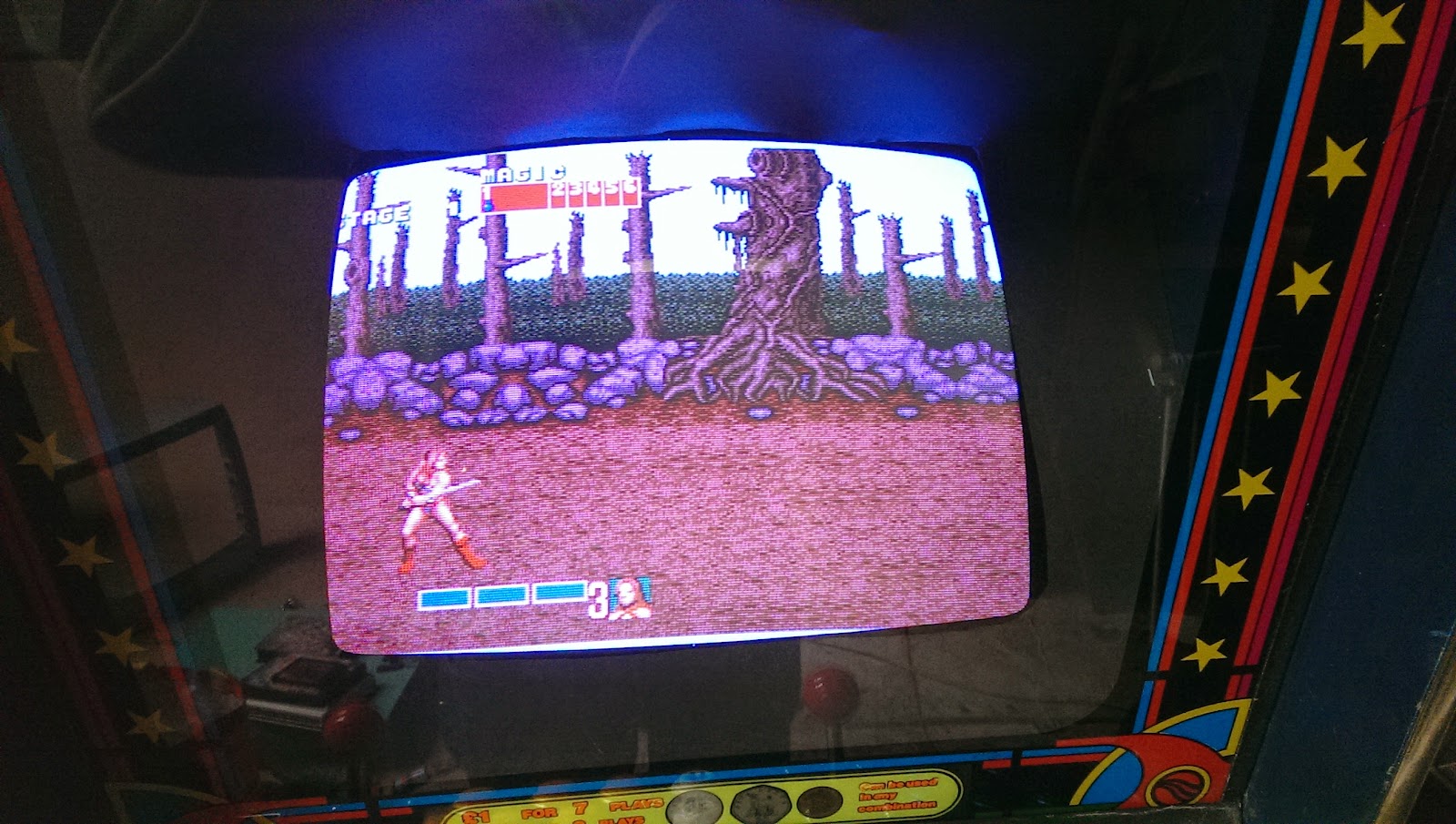 The next step was to tidy up the dangling wires inside the coin door area so I got some of my cable tie bases stuck to the inside of the wood and cable tie'd the wires out of sight. Nice and easy.

I also wanted to mount the Test Switch within the coin mech area on the back of the coin door but the wires weren't long enough so I got a pair of off cuts from the jamma harness and extended them so that I could neatly route the wires along the inside of the cabinet and out to the coin mech nicely. So now when you open the coin door to get to the remote to set the TV to AV so that the picture is perfect the Test switch cabling is no longer pulling on the harness wiring and the door swings freely. :-)

And that's it! :-D I wanted to make a new marquess sign for the machine which I might still do at some point but It all still works and fits and is how the machine was last set up so I think its good for now.

The machine now needs some games played on it so it can be used again. At the minute I've gotten my Jammadrive 2 in permanent residence so that I can get blasting some of the amazing Megadrive arcade conversions I have. Golden Axe really plays nicely in the stand up cab set up even though its still the megadrive version.

Here is the arcade machine in its new location for a while. As you can see I had my trusty assistant with me helping me out. Unfortunately he's too short to reach the Player 2 controls. haha :-P As I said numerous times Im really stoked out with this project and how I've managed to bring an actual arcade machine back to life from the dead! Its been a project where I've learnt a lot and gained a lot of confidence in this area of retro games electronics / wiring etc.

I have another arcade machine project on the go at the minute, yes I know! Another! But this project is very different to this machine so again its a neat learning experience.

So expect another post up here soon. Hopefully I get a major component for it back tomorrow (fingers crossed) so I can really get to work on it.