It's been a little while since my last post. I've been itching to make posts about my new toy but I've been having nothing but trouble with it from pretty much the off so much so that I haven't gotten it to a stable position enough to make a post about it haha.

And the weird thing is I bought this under the impression that I could just plug this sucker in and play. Unfortunately that hasn't been the case. 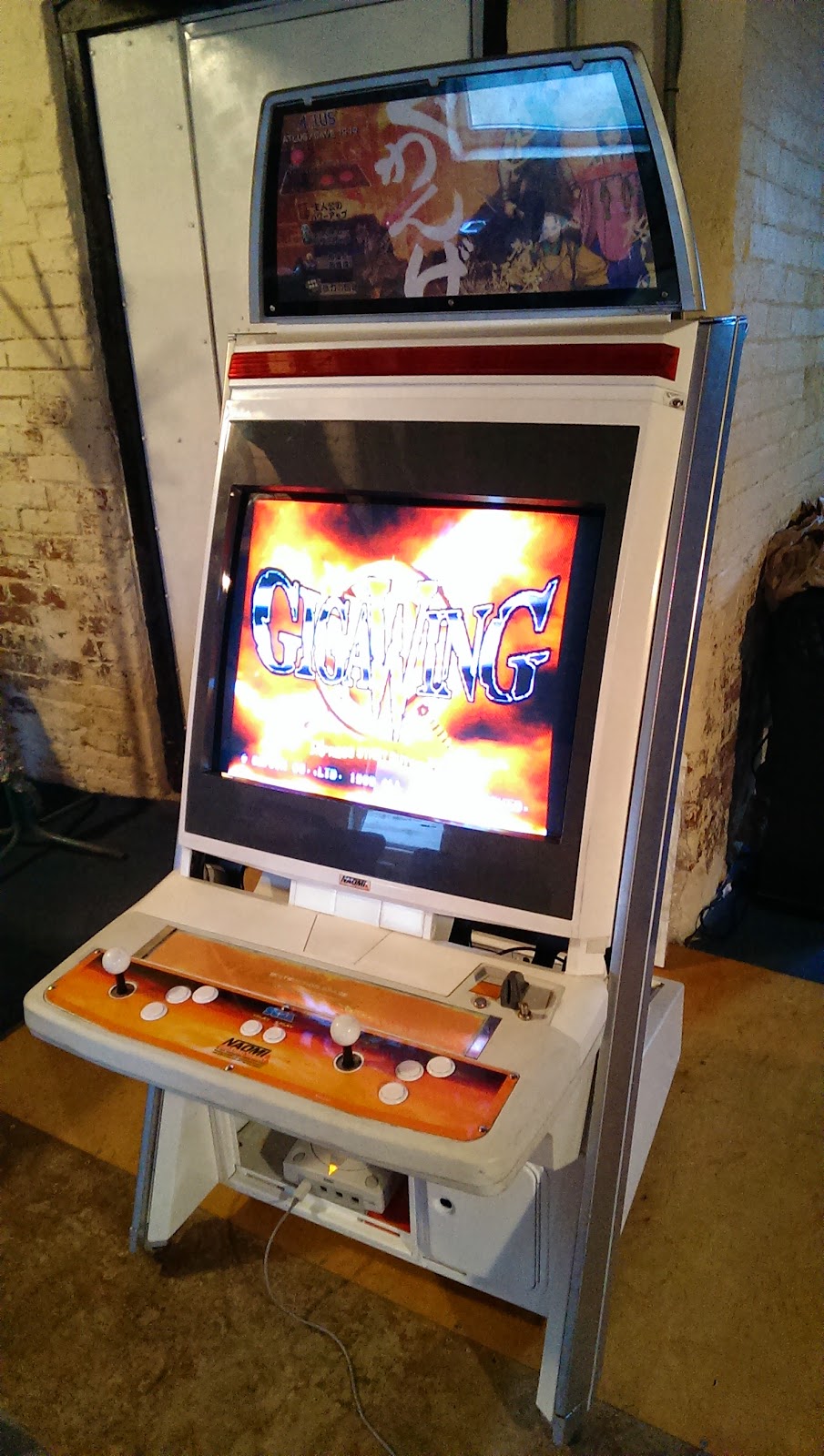 Here is the beast, my very own candy cab! I must admit, I didn't think I would ever own a candy cab because they are so expensive!

Unfortunetly this isn't the view I had when I first got it home.

Right, how did I end up getting hold of a Naomi Universal cabinet in the first place?

Well I was sitting at our breakfast bar one evening after work with my Fiancé Rozzy and some how doing a random google search I came across an link to an ebay auction for a Mame ready naomi universal arcade cabinet. So being a nosey bugger I clicked the link and went through to the listing. It had 2 days to go I think and it had some bids but it was ridiculously low so I said to Roz that I might bid on it but I would never ever get it because it's going to go for at least £200. She said that if I did end up getting it for the measly sum I put in she would treat me as an early wedding present. But I was convinced that I wouldn't get it and to be honest, if I did win it where would I put it?! We live in a cosy small cottage and I don't have a garage haha.

Well, obviously I kept watching how the auction was progressing and no more bids came for a while and I was winning and thinking "crap! Im actually going to win this and I have no where to put it!!! what was I thinking!?" but it still had time and any arcade machines I normally watch for curiosities sake have a blitz near the closing time and shoot right up. Well finally another bid came but I was still winning. Then Wednesday lunchtime comes and Im watching for the Blitz like a hawk on my phone and .....I won it! I only went and blumin' won it and for the princely sum of £64!!!! £64 for a candy cab! And the description said that all I would have to do after collecting it was to plug in a Mame set up PC and it's ready to go! Wowzers!!

I had a bit of a panic about the whole situation to Roz and being awesome she got on the phone and sorted out with her family that I could keep it at their farm until we eventually end up getting a bigger house and I can take it home then. I had the idea that it could go up into our hobby room (this was before I saw how big it actually was and how heavy it is. jeez is it heavy!) but the floor wouldn't be able to hold this kind of machine as its an old place. So I have to store it and work on it at the minute.

Well, we borrowed the Discovery and headed off to Birmingham to pick it up and hope that it would fit in the back. We met up with the seller and had a good ol' chat and nose around his lock up which was packed to the gills with other arcade machines and spare parts. Pretty awesome! And the 3 of us, lifting with our legs, managed to get it to fit quite nicely in the back of the Discovery without any disassembly other than taking the top marquee out. Phew, that was a worry! I really wish I'd taken a photo of the machine in the back of the Disco but with all the excitement I didn't get my phone out. Oh well!

Off we trotted carefully back home in the Disco in rush hour traffic and got the machine out and across the yard to where I'll be working on the machine. 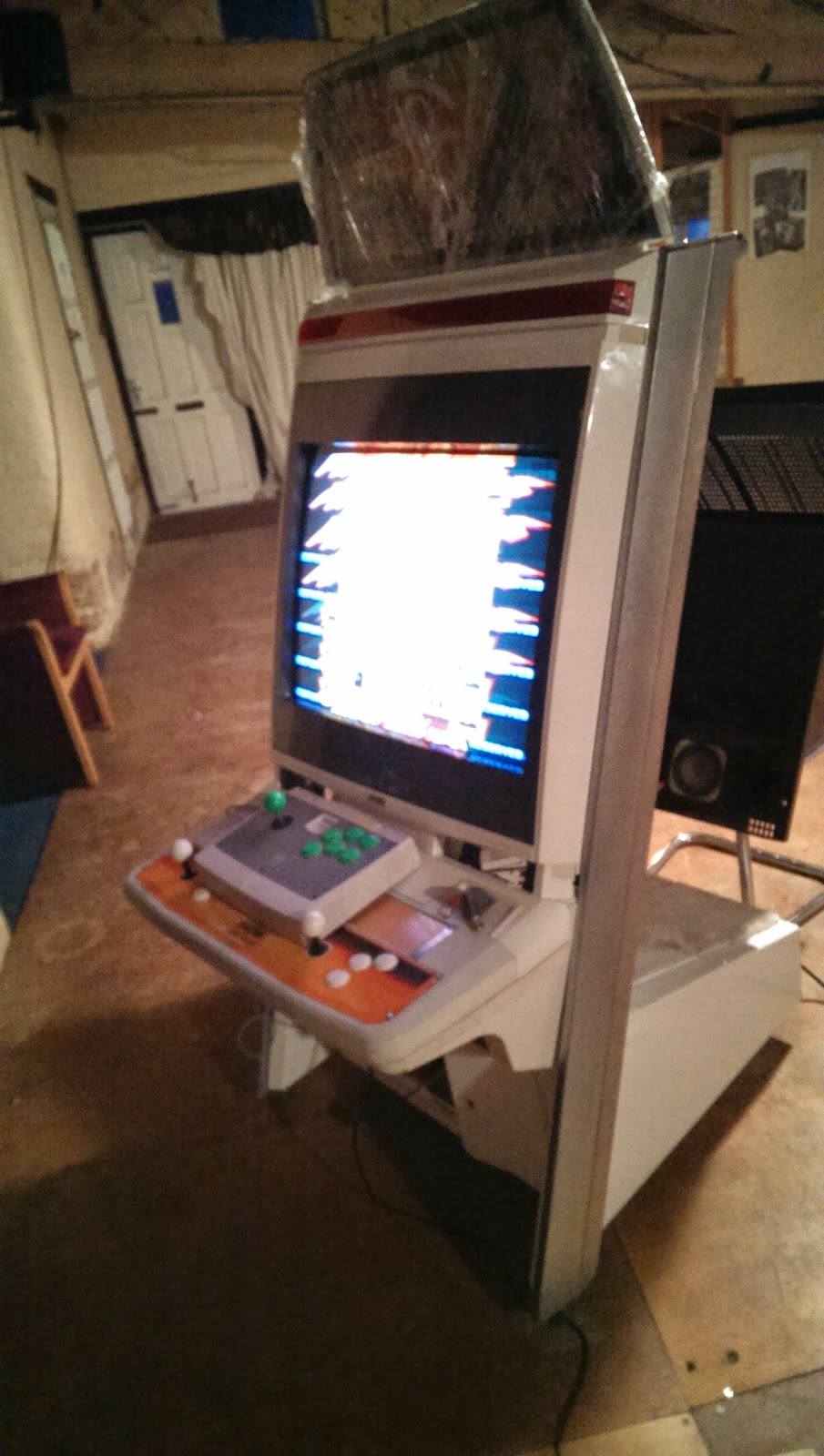 Super excitedly I looked over the machine, got my Dreamcast out of its carry case as the Dreamcast (VGA modded) should be able to plug straight into the Naomi and play straight off and plugged it in. Turned all the power on and I get an image on the screen but it is rolling like a maniac!! Vertical sync isn't working! The image filled the screen from what I could tell but it was scrolling really really fast. I switched off the Dreamcast and tried it a few more times checking the cable was sitting correctly but no go.

So I gave up for the day and headed home and onto the Forums and google to get a hold of a manual and do some research.

The next day I went back to the Naomi with an idea that I'll take the back hood off the machine and hunt down the vertical hold / sync and get it adjusted to settle it down. 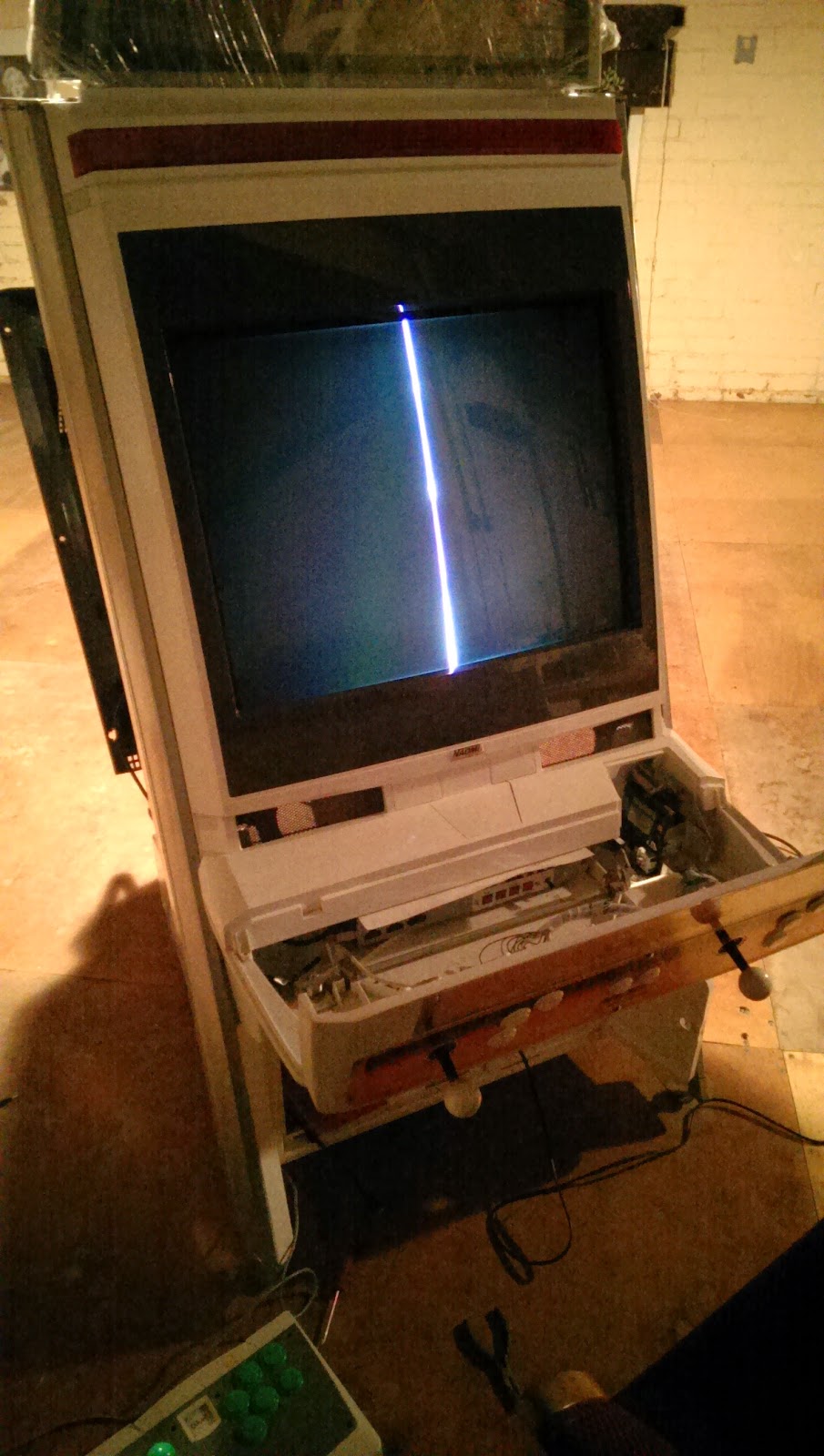 Unable to find a V Hold pot I started adjusting the H hold and got the image tuning in and out like you get with an Old TV tuning a station in. I got all the way to the left and got a vertical thin line. This must be the left hand side of the adjustment so lets turn right and see what happens when we get going. Turn......nothing......turn.......still nothing. I got a very cold feeling go down my spine with a realisation that it had just broken big time!!!! Oh man!! This was meant to be an easy plug and play system.

See the image to the left. This is all that happens when tried with either the Dreamcast or the laptop. Oh, and the thin vertical line is still rolling without Vertical sync.

So I got back on to the forum and I got chatting with a guy who is the go to man for repairing the chassis in Naomi's and he's confident that he can repair it.

Of I headed to take the chassis out of the machine and send it off for repair and he found a multitude of things that had gone wrong on the chassis. Cold solder, capacitors gone as well as the vertical transistor and safety resistor. I think I'd been sold a bit of a dog of a monitor set up within this machine. The machine as it is is sound even if it needs a little bit of work to tidy up but the main bit being the monitor seems a bit boned!

Anyway, after a week Grant sent me back my repaired chassis and I installed it into the cabinet and I get a full screen view but its got a twitch to it. It seems like its trying its hardest to roll but something is holding it back. You could really tell it was itching to roll. I adjusted the image with the control panel break-out board and had a quick go on Street Fighter 3 double impact on the Dreamcast. This go was without sound though as the speakers are mounted within the rear hood of the machine. So I got up and headed over to get the hood so I could plug the sound in and I heard a really loud SNAP!!. I quickly turned round and the thin, glowing vertical line was back! Flippin eck!! :-( 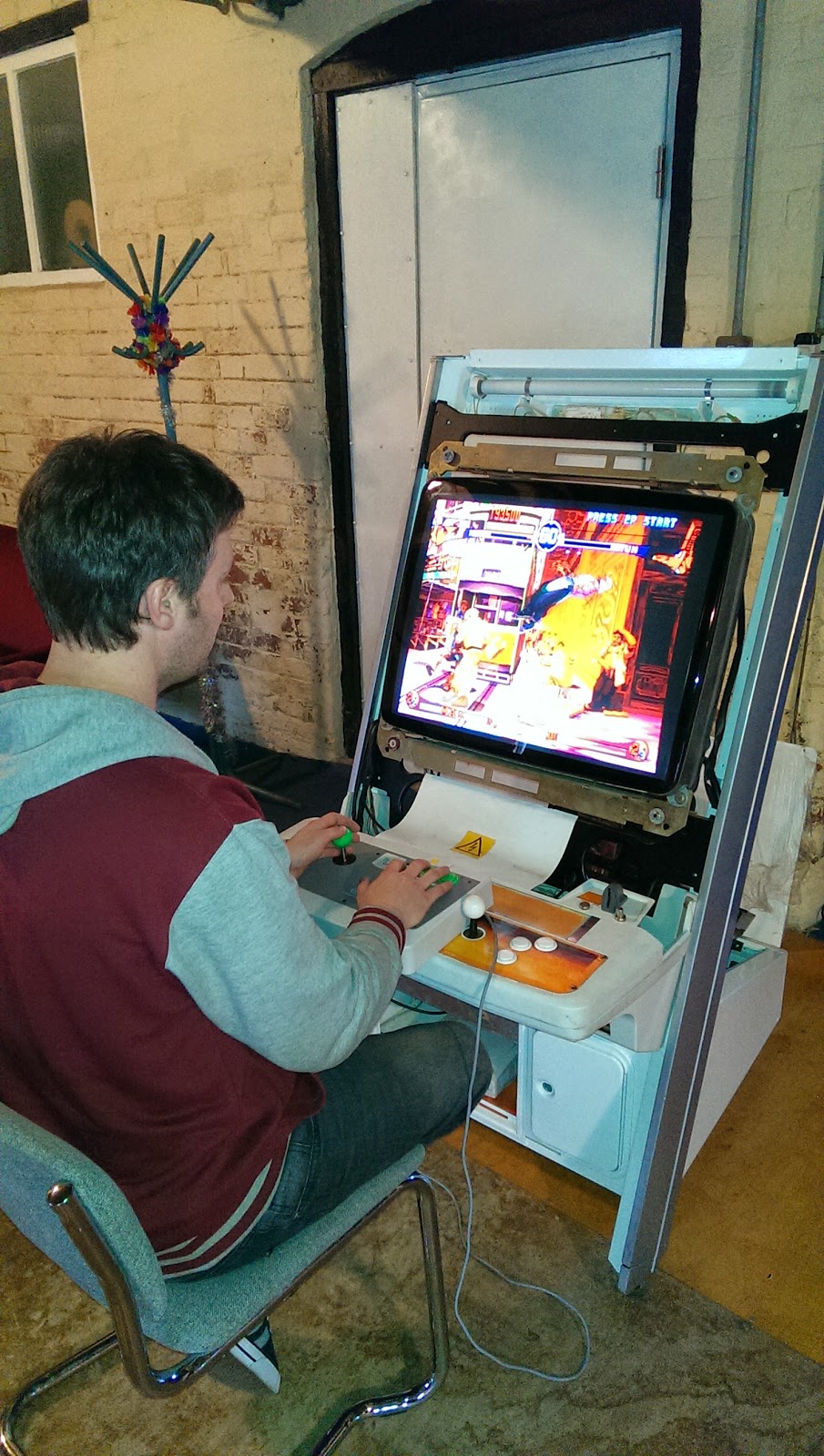 After some further PM's Grant really nicely sent over a replacement Transistor and resistor as he thought that the transistor was faulty. The next weekend I replaced the components and BINGO!! I got a steady image! Its on a slight tilt but not so much that the lay person could see without being told. I've got weird pincushion squeeze that I can't adjust out but I'm able to finally play some games on it using my Dreamcast and my Dreamcast arcade stick as I haven't got any pad hacks done yet.

Check it out! That's me playing some Street Fighter 3 Double Impact on the Naomi :D It's stripped down because of fitting the repaired chassis but its working and MAN IS THAT SCREEN BIG!!! It's like sitting in the cinema on the front row, you actually have to turn and really look around the screen or you'll miss something. Its awesome!!! 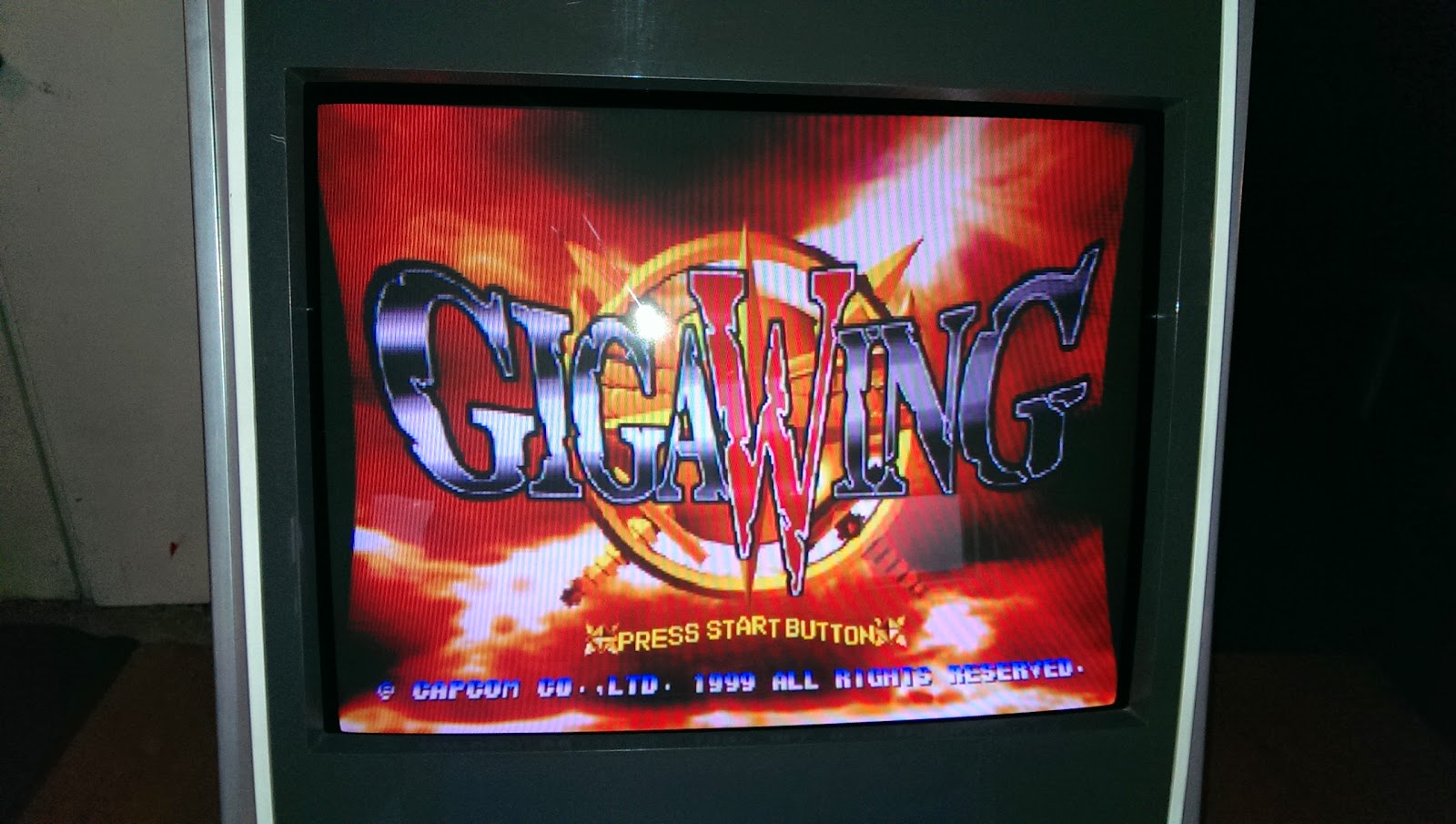 The pin cushion pinch is a bit anoying though as you can't get the image full screen without it pushing in at the sides so this needs to be adjusted (see right) but the next main job is building a Mame PC from as many spare parts as I can find so its nice and cheap as it's going to sit in the lower part of the Naomi perminantly and only play games. So it doesn't need to be any kind of real power house! And once the PC is working I can get the control panel hooked up via the iPac thats installed in there. :-D

Here's a few shots of the Dreamcast running on screen : 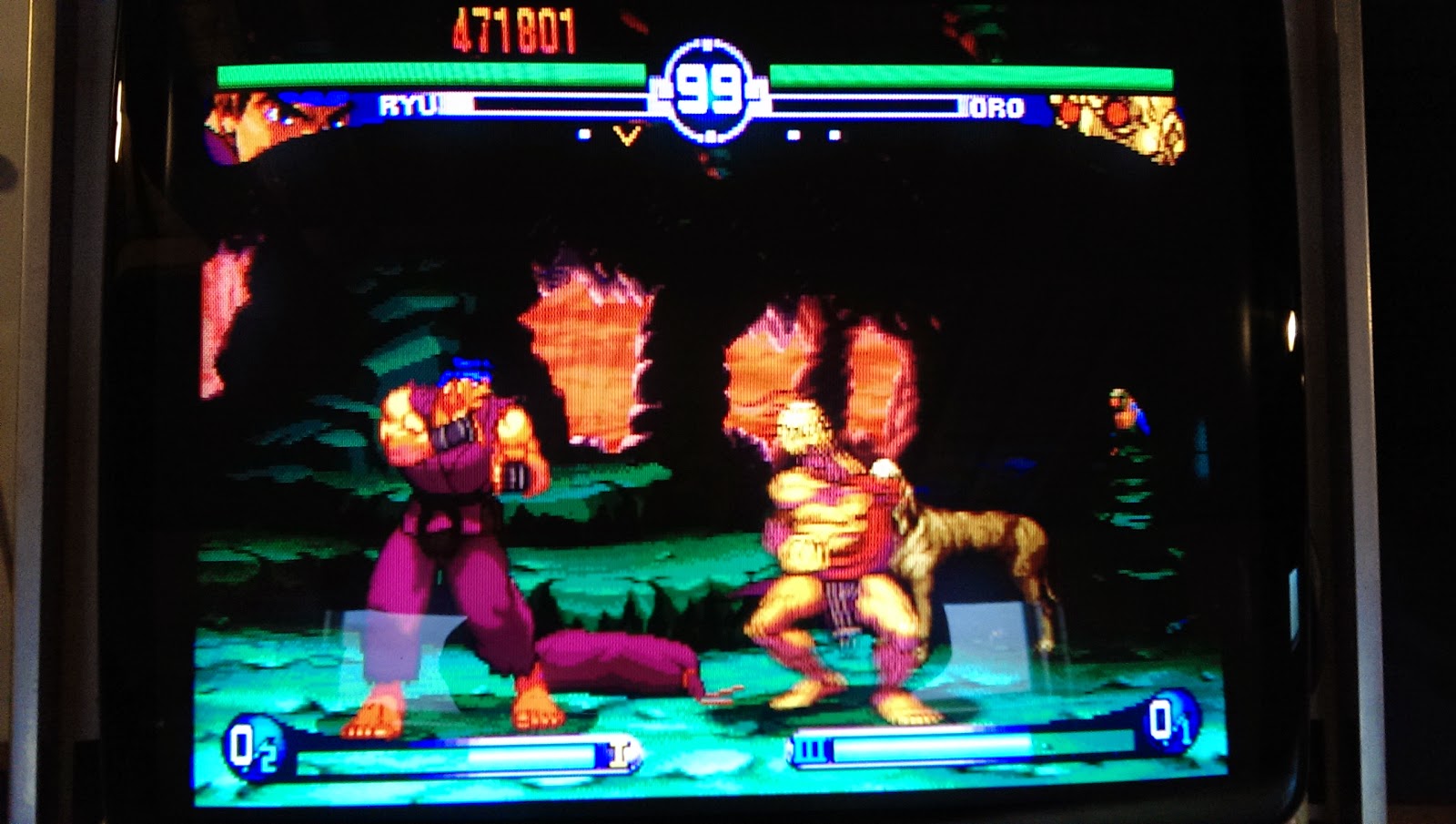 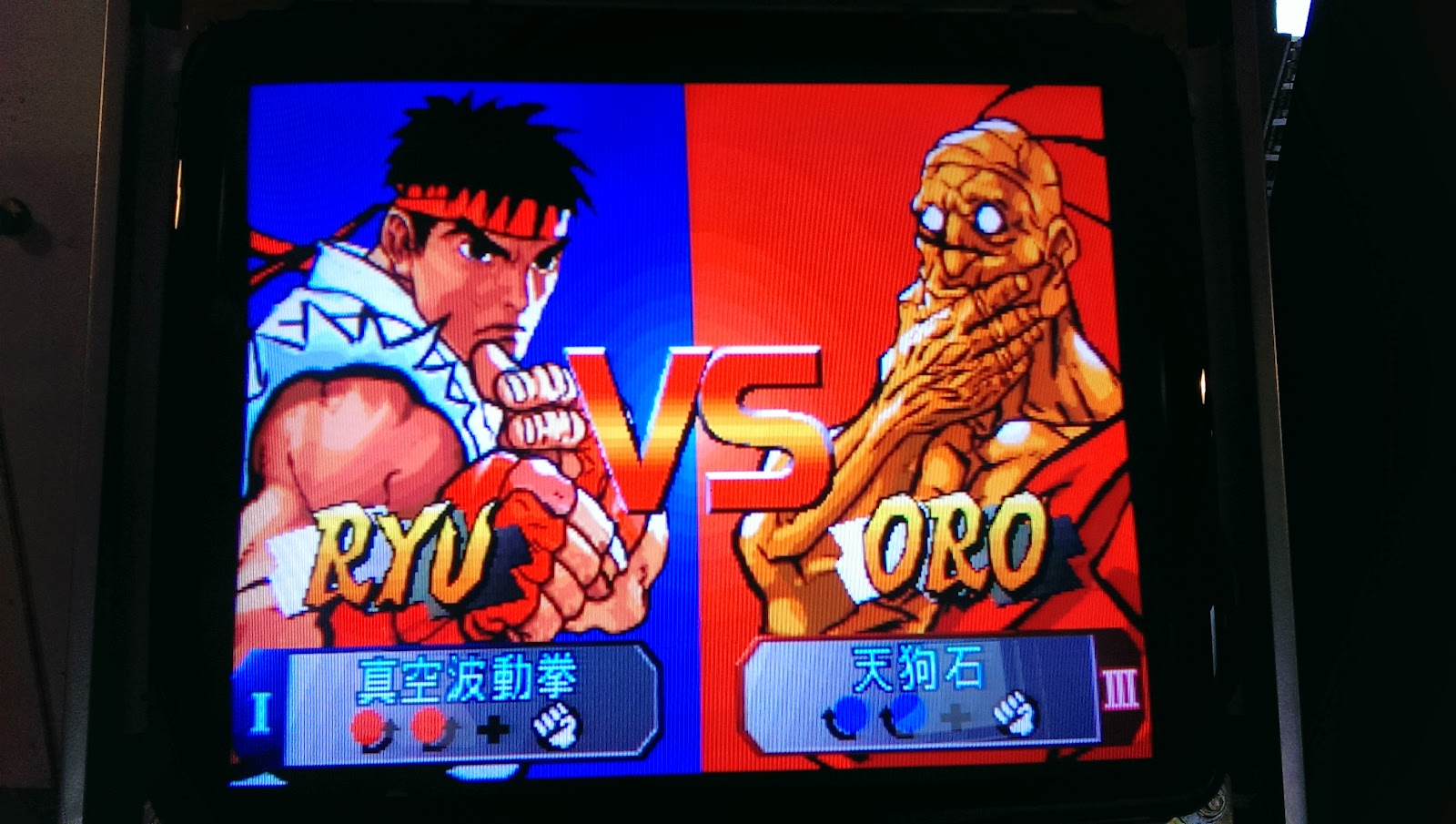 I've also made a video explanation of the progress so far so you can see it actually playing Street Fighter 3 Double Impact.

Catch you in the next update y'all.