I left the Supergun in a completed working state. In its current form it will play all JAMMA compatible PCB's as well as a Neo-Geo MVS 1-slot motherboard.

In some of my internet searches for game information and to see what games are around to purchase I saw 2 CPS2 games and an A-board to run them and snapped them up. When I was a kid I loved Streetfighter and the Streetfighter style games and to play the real ones at home would be amazing. I'm itching to pick them up at the end of the month. :-D

With the normal JAMMA arcade set-up you only need 3 buttons to play the games. With Neo-Geo MVS games you need a 4th button (D) so when I wired up my Supergun I added in the D line so it will play both types of arcade game.

Because I'm getting the CPS2 games I wanted to add in the abillity to have all 6 buttons working. The 3 punches and 3 kicks. I looked on the Jamma-Nation website and saw a really cool guide on making a multiple kick-harness adapter for your Supergun using a 9-pin socket.

I didn't have any 9-pin sockets lying around but thankfully I still had the Megadrive 2 that I couldn't bring back to life. I found the board out and fired up my de-soldering iron and took the 2 controller ports from it. I like using and salvaging parts if I can. Adds to the fun of creating the Supergun I think. Anyway, here is the desoldered controller ports from the Megadrive 2 dremeled to seperate them. 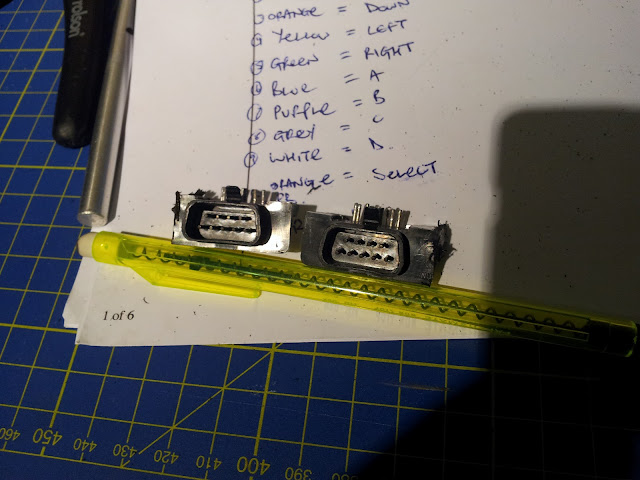 After getting the ports seperated and free I set about making the hole in the back of the Supergun for the port to be mounted too. I was a little worried about this stage as the back is all wired up and finished that my dremel drill would end up snagging or cutting a wire in there.

I found a spot that should be easier to work on and fit nicely away from the majority of the wiring. 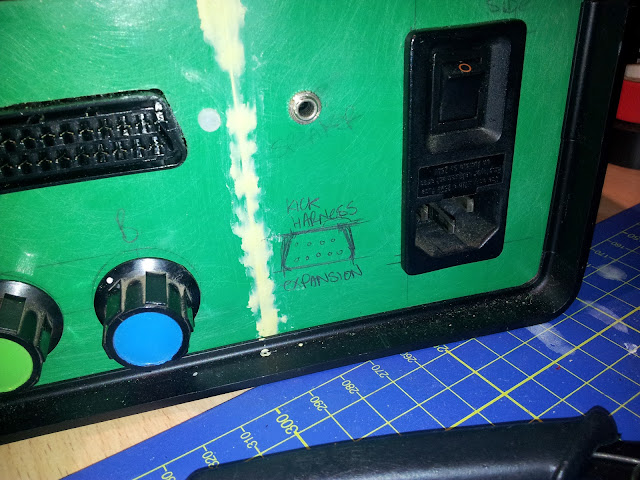 Because the JAMMA harness had lots of wire left over from me cutting it to length inside the Supergun I had the perfect wire for hooking up the controller port pins to the new expansion port. I was hoping to use the same wire for the kick-harness adapter so that it was all wired the same through out.

When you wire up a 15-pin Neo-Geo + controller port you end up with 3 pins left that aren't wired up. Perfect for adding in the kick-harness as you have the spare pins to fill. I measured out the amount of wiring to span the Supergun from controller ports to adapter port and started soldering the wires up.

I tried to match up the colours of the wires to match the adapter guide as best as I could and grouped them to make it nice, neat and easy to keep untangled from the JAMMA harness.

Thankfully the Megadrive 2 controller ports have a 90 degree angle on the way the pins come out the back compared to how they are in the socket. This allowed easier soldering to the socket and routing in the confined space at the rear of the Supergun.

When it came to this stage I wrote down the colours of the wires I was using and noted their positions on the expansion socket so I could wire up the Kick-harness I'll eventually either buy or make so that it matches up.

Here's the expansion port all wired up and ready to be mounted to the back of the Supergun. 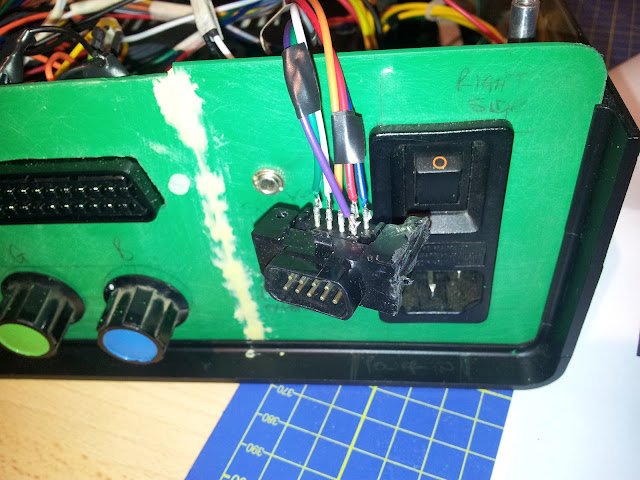 The cut doesn't look too neat I must admit but this will be hidden away inside the Supergun case and no-one will see it.

One thing I found with using the salvaged Megadrive2 port was that there are no mounting holes for you to screw it to the case. The only way I could think of to secure the port to the case was with hot glue. This made a nice hold on the rear panel and also insulated the wires so there shouldn't be any cross signals.

Here is the rear of the Supergun all finished up. All that's needed is sanding down the milliput join and spraying the rear panel matt black. 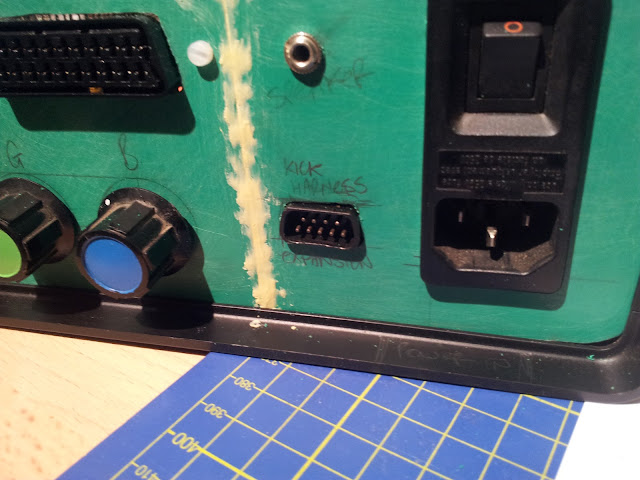 The expansion port makes the adding of Kick-harnesses nice and neat because its not going to be another adapter hanging out next to the JAMMA edge connector or a perminant set of wires hanging out the back of the case all the time. So whenever I want to play a CPS game (1,2 or 3) or Midway fighting game I just plug the kick-harness into the socket on the back of the Supergun and I'm away.
:-D

It was easy to follow the guide and wire up so if your making a Supergun I recommend going a long this route for a nice adaptable Supergun in the end.

Catch you later for some more geeky goodness.