I'd left the last post with a working Supergun, well working with video and sound and I was waiting for my front panel components to arrive.

I'd ordered my front panel components (as well as my Scart port) from Rapid Online and they turned up pretty quickly.

The first thing for me to do with my front panel was to fill in the holes that were cut for use in the cases's previous life. I put electrical tape across the holes and then filled in on top of the tape so the Milliput wouldn't fall through.

After the Milliput had dried over night I hit the front of it with some heavy grit sandpaper to smooth it out. I layed masking tape out over the panel and then sketched the layout of all the components ready for me to dremel all the holes out.

I spent a bit of time sitting outside in the garden with my dremel (and Guinea Pig girls for company) trying to get the holes as neatly as I could. Rough cutting and then sanding the holes and then offering up the components each time to see if they would fit smoothly.

After about an hour I had all the components snapping in and out smoothly. I then spent the rest of the evening giving it some grey primer so it can eventually become nicely Matt Black when done.

The next night I eagerly got home from work and started mounting in the front panel components. 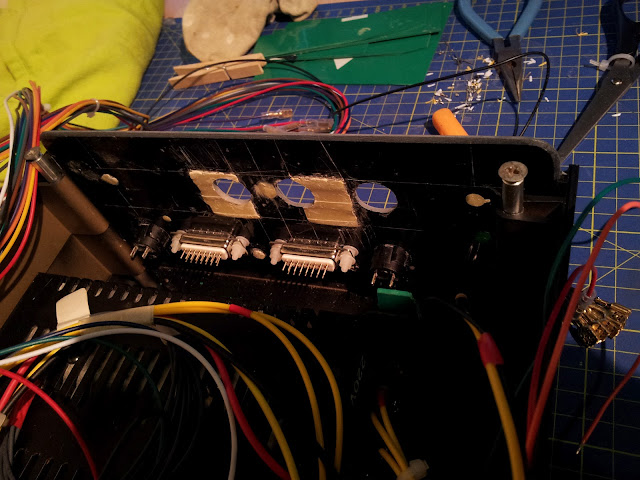 After popping the momentary switches into the front panel and screwing the 15-pin sockets in I measured out the JAMMA harness wiring so I could make sure it would all reach okay with some slack for soldering and still be neatly track-able.

The momentary switches for the player 1 and 2's coins the JAMMA test, MVS test and Service were easy to figure out because they each only need 2 wires. A signal wire from the harness and then a ground wire. The good thing about Supergun's is that you don't need to have individual grounding wires to everything, you can daisy-chain them along to save on trying to solder multiple grounding wires to a single point. It would be a right mess I think if you did it that way.

The trickiest bit of soldering for the front panel was the Neo-Geo wiring for the controller sockets. Mainly because of close proximity of the pins, and making sure your soldering the correct wire to the correct point.

The cool thing about using the Neo-geo pin-out for the socket is it will work with any Neo-geo arcade stick. And it also leaves 3 pins available for the 3 kick buttons needed for 6 button arcade sticks.

Once I got the player 1 port wired up and the switches sorted I thought it was probably the best thing to nip the Supergun up to the Hobby Room to check that I'd got the sucker sorted or not. A quick setup with my 1 game and Ding Ding Ding, 3 coins were registered! pressing Start on the arcade stick and the game started. Up, Down, Left, Right worked, as well as A and B. It worked!!!! :D I was well happy!

I unplugged the connections then nipped back down to the kitchen and wired up the 2nd player socket to finish it off.
A quick solder, a quick test and boom! 2nd player works too!

I HAVE A SUPERGUN!!! Some self high-fives, massive grins and several games at trying to figure out how Teki-Paki worked later and I was done. :D


All that's needed now is the Matt Black paint on the front and rear panels and my friend said he would do a cool paint job on the outer casing for me. He does great stencil canvas's which we have 2 of and I think his style will look sweet on the Supergun.

A dream fulfilled! I own an arcade machine!! And one I can keep in my house because it doesn't take up the room a full cabinet does. :D

The next step is to make a Kick-harness adapter for hooking up the extra kick buttons for games like Street Fighter 2 etc. And wether to buy a pre-made CPS2 kick-harness or make one. ;)