I was lucky enough to find a Japanese CPS2 motherboard and Street Fighter Alpha (Phoenixed) and Vampire Hunter : Darkstalkers Revenge being sold by a dude in Swindon at a great price. We had some email correspondents and one Sunday when we were heading down to gloucester to visit some friends we nip a bit further to Swindon and picked the games up.

The first thing I noticed was how big the game cartridges are! And how awesome they look! :-D They are you basic JAMMA PCB's but enclosed in a nice looking plastic casing which you press onto the A-Board or motherboard. When all pressed together the game system itself is as big or bigger than your normal console. It looks the business set up. 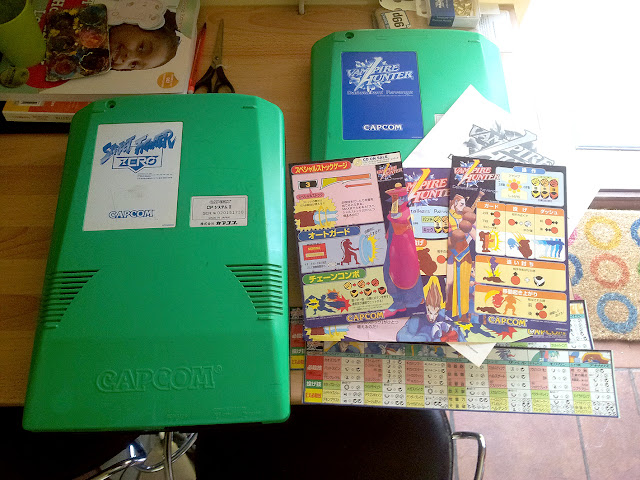 Above you can see the CPS2 cartridges I got with a nice surprise. The guy found the moves list and some artwork for Vampire Hunter when he was sorting the games out and chucked them in with them. Really cool cus I haven't got a clue of the moves for Vampire Hunter haha.

After getting the game you want nicely pressed onto the A-board and grinning over how cool it looks the first thing you notice when you turn the Supergun on is how loud the A-board's fan is. Man its loud!!! Like a hoover. The A-board has a small PC cooling fan mounted to it to keep the game boards cool. Because of them being enclosed in plastic, which is great for keeping them dust free they don't get air to them and will easily overheat after a couple of hours of playing. So they put a fan in there to blow air over the PCB. When you have the game running, tucked away inside an arcade machine with the speakers turned up, in an arcade environment with loads of other loud games trying to get your attention you really don't hear the fan. Put it in a home environment hooked to a Supergun you do notice it. But saying that, you turn the speakers up a little bit and start playing you forget all about it. You get zoned in on the game and the hoover sound disappears! 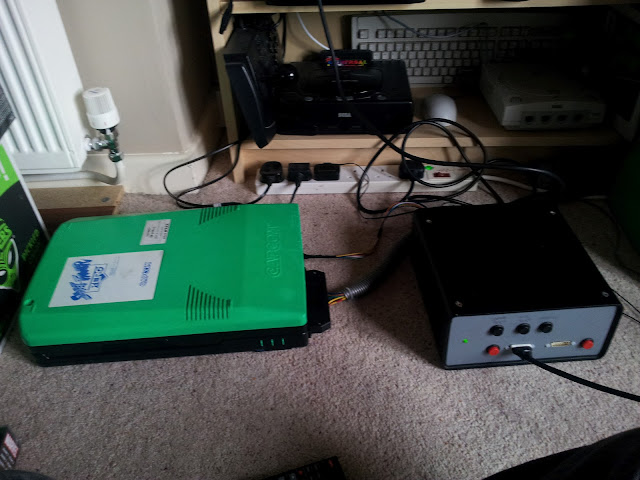 Here you can see the actual size of the CPS-2 system against my Supergun and the Sega Saturn in the background. Its pretty big hey!? But looks pretty darn cool and something thats not in everyone's console collection.

As you can see from the previous photos both the game cartridges are in green cases. With the CPS2 system there are several different coloured game cases. The colours tell you what region the game is ie: Asian, Japanese, USA etc. This helps you make sure your getting a game that will run on your A-board as you need to match the game to the motherboard otherwise it won't run.

The colours for the system are : Green - Japanese, Blue - USA/Canada/Europe, Orange - South America, Grey - Asia (china, korea etc), Pink - Brazil, Yellow - Region 0 and were Capcom rental games, Black - Region 0 and are the motherboard and game board joined together.

The good thing with having a Japanese motherboard is that both Green and Blue games work on them. The same with having a USA A-board. So it gives you a little bit more flexability and freedom with getting your games. More options when scouring ebay haha.

A quick word of warning when you first get a CPS2 A and B board and hook them up to your Supergun for the first time. You will no doubt hear the fan kick in but the game will not boot if you have the Supergun set to running normal JAMMA games. The thing I found out about the CPS2 from the forum I go on Arcade Otaku is the CPS2 needs slightly more +5v from your power supply. So you will need to slighty tweak up your PSU to give the CPS2 A-board enough power to get everything booting nicely. Having an arcade PSU with an adjustable +5V dial on it is quite essential I would think when using CPS2 stuff.

The next think you will probably notice when you get the game running is that the colours are all weird and all bled into each other. As you can see from the picture below its all red and there is no depth in the colours. They are very flat. (ignore the weird vertical lines, these are from me breaking a pin on the A-board when I first got the system but I've since then repaired it which I will post about soon). 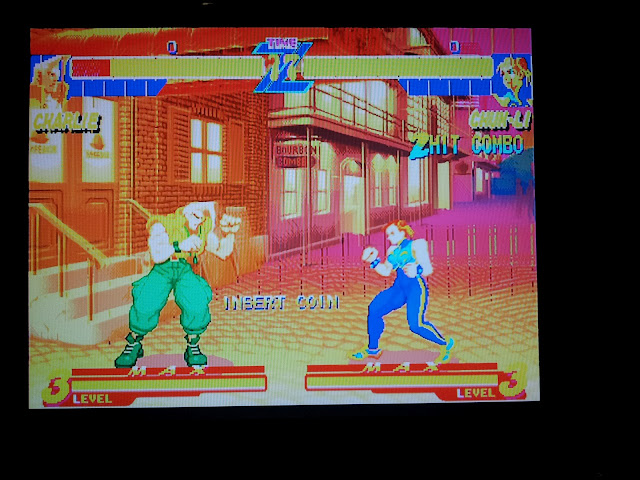 The reason for the weird colours is because the CPS2's colour signals it produces are super high! Here you will need some adjustable Red, Green and Blue dials on your video output from your Supergun so you can turn the suckers right down. When I use other JAMMA games I have the RGB turned up quite high but when you get the CPS2 going its cranking out such a powerful signal you really need to turn it down and play  with the dials a little bit.

Below you can see what the same level should look like when you have your dials tweaked down. It looks a lot better now hey and how its meant to look :-P A lot more depth in the colour and not all boosted out. 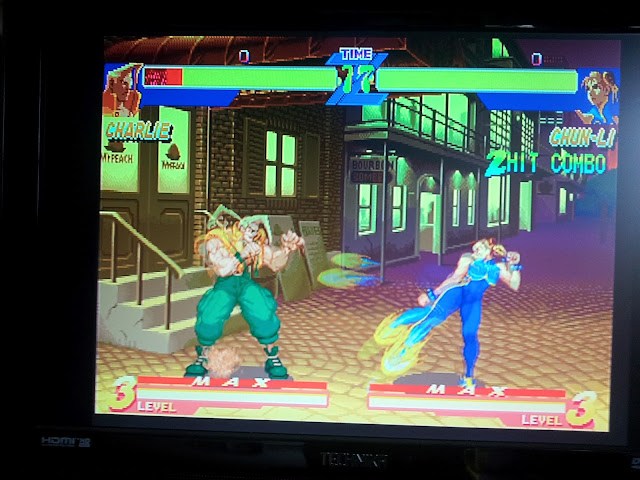 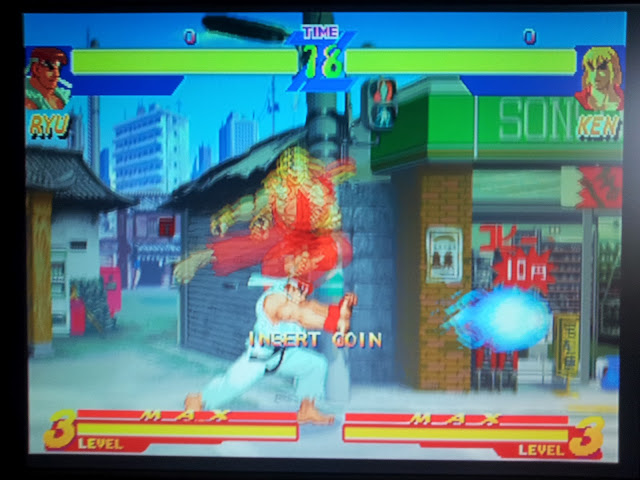 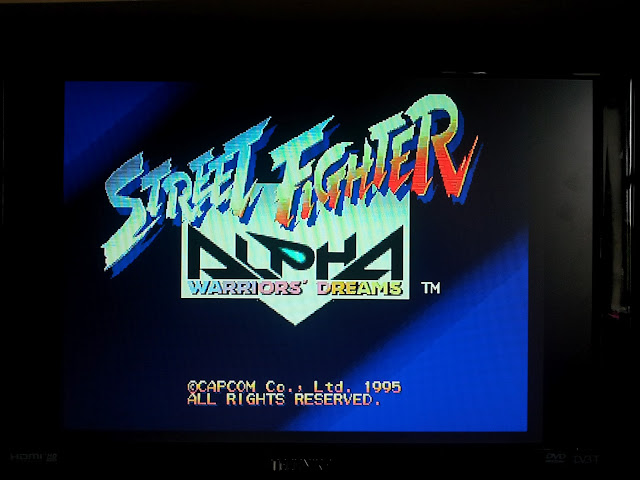 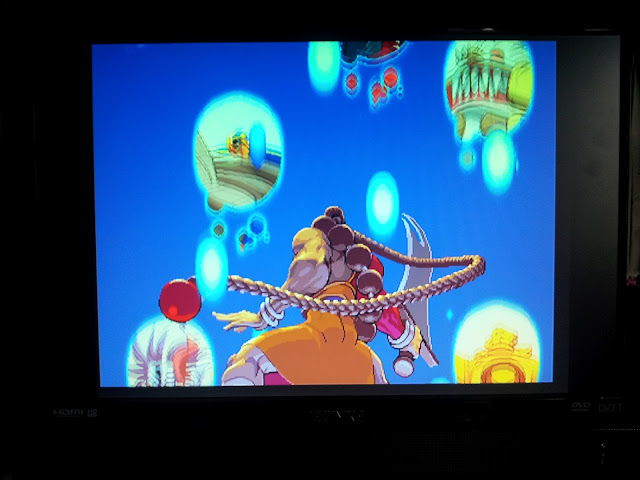 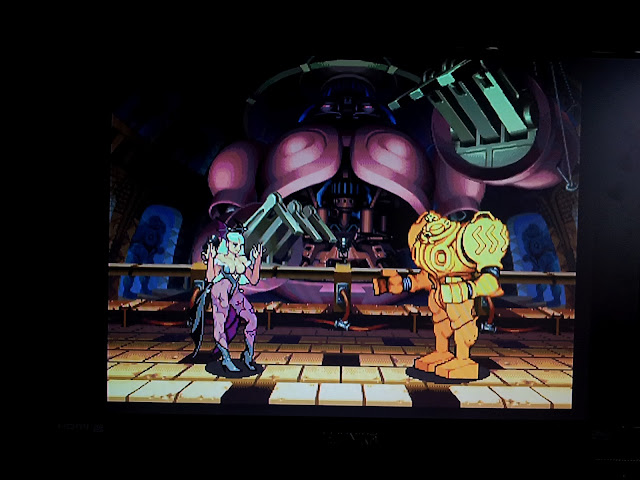 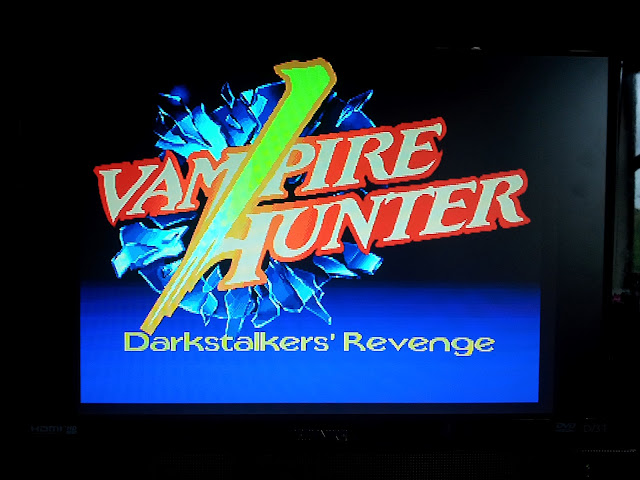 Above I've added some photos of the 2 games running on my little telly. Proper arcade classics on your home TV is a really geeky feeling I must admit haha.

I've made some videos of the games running on my Supergun so you can see what they are like running at home.

Catch you later, I'm of to play some Street Fighter Alpha :-P