It's been another long time posting and I miss it actually. Posting meant that I had projects on the go and I would always like posting up progress with learning new things. Well the only projects I've been working on recently have been reflowing PS3's. My sister's housemate months ago asked me if I could fix his YLOD on his PS3 so I looked up how to reflow and got ready to try it when his mate said he would have a go. Month's later I still wanted to see if I could 'fix' a PS3 so I bought a 40gb PS3 phat for £12 from ebay and had a go and it worked first try. Man I was stocked! A PS3 for £12! Hot dog! I posted on facebook about it and peeps started asking me to fix some for them so I've basically been doing that. And when I haven't been fixing PS3's I've been playing through Halo : Reach on my xbox or playing Resident Evil 5 / Uncharted 2 on my PS3 or Metal Gear Solid : Peace Walker on my PSP. :-D Playing through my games list has been awesome!

Anyway, the Arcade machine!! If you've read my old posts you will have seen the arcade machine I basically inherited. The monitor on the machine is Fubar'd though so I've left it be.  Recently my girlfriends brother has an old CRT TV that he's getting rid of which looks like it might be the same size, so I've started thinking about seeing if I can switch them over today.

I've been thinking of the things I would need and what I have already for the machine and I think I can do it quite cheaply. I need to take the monitor out as well as all the wiring as its a non-jamma loom in there. You need a converter to hook up a jamma game and I'm not 100% where every wire is going, so I'm going to re-wire it so I know what's what.

I already have an Arcade switching PSU and the donor tv so I just need a new Loom and possibly some new controller bits and bobs as the ones in the machine are super old-school.

Here is the kit I took with me : 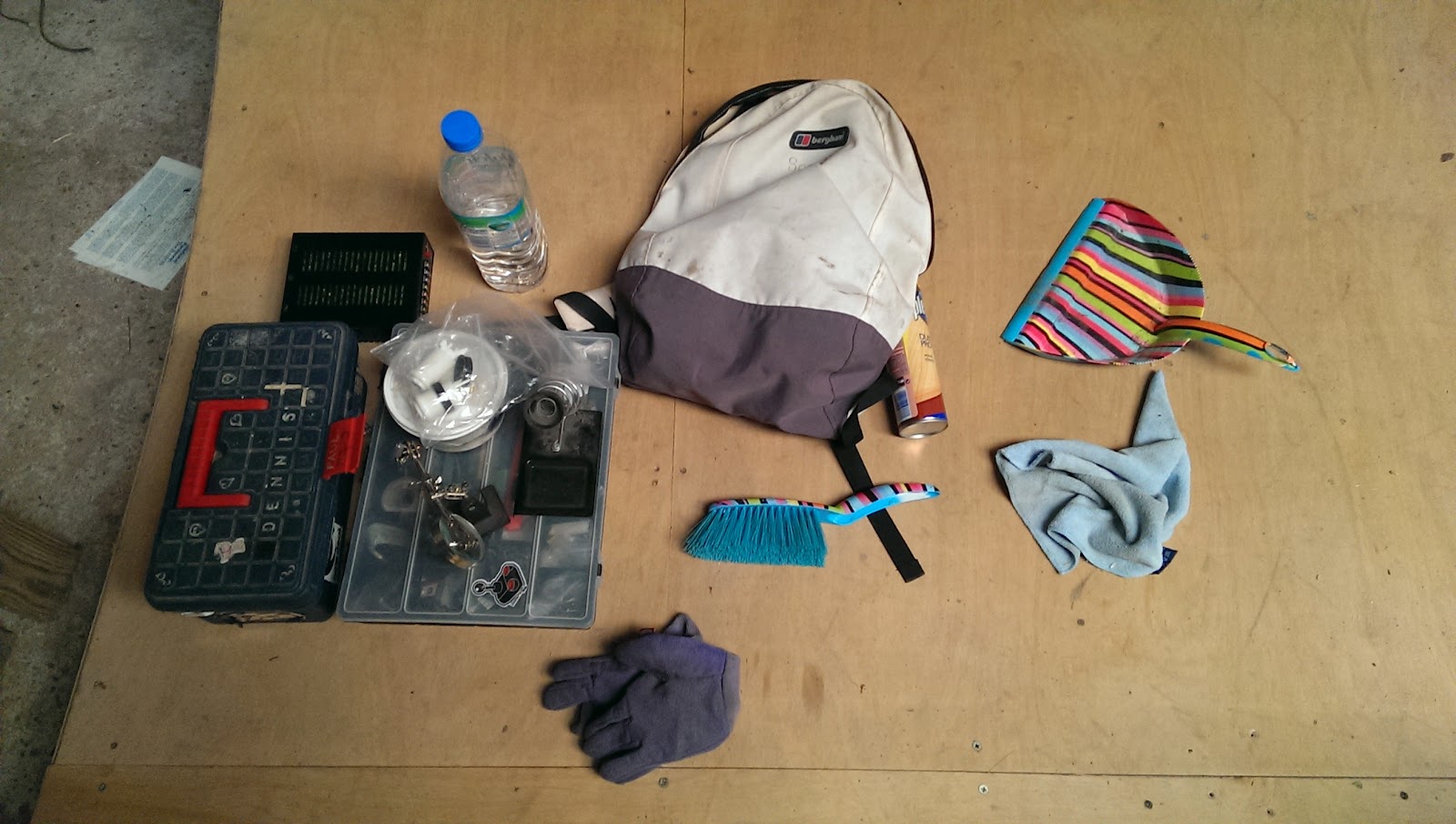 I thought that I would mainly be cleaning out and stripping down today but I took my soldering kit just incase I hit any snags.

Here is how the machine looked after I cleaned it all down with the brush and the wood polish. I wanted to get a good look at what needed to be done with the machine. Yes that's me in my scruffs looking like a dork in the reflection :-P 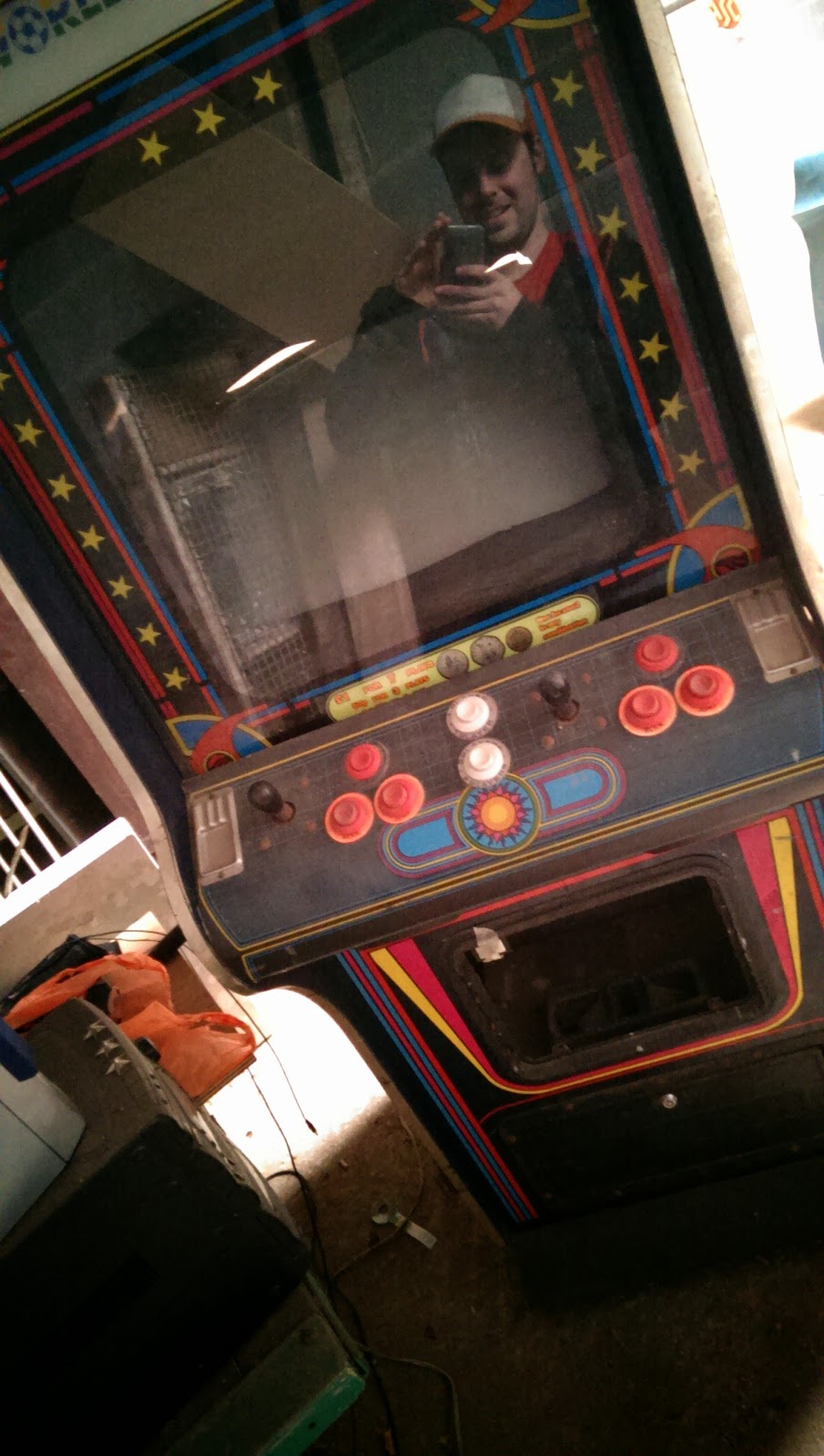 It's a proper old-school chip-shop / taxi rank machine and it brings back tonnes of memories of using my pocket money to play games as a kid. So I don't like the thought of it going rotten and unplayed.

As you can see the control set up is just standard Jamma and would need to be set up to play street fighter style 6 button games. Or at least I would like it to be able to play those types of games on it. It gives you more options hey? :-P 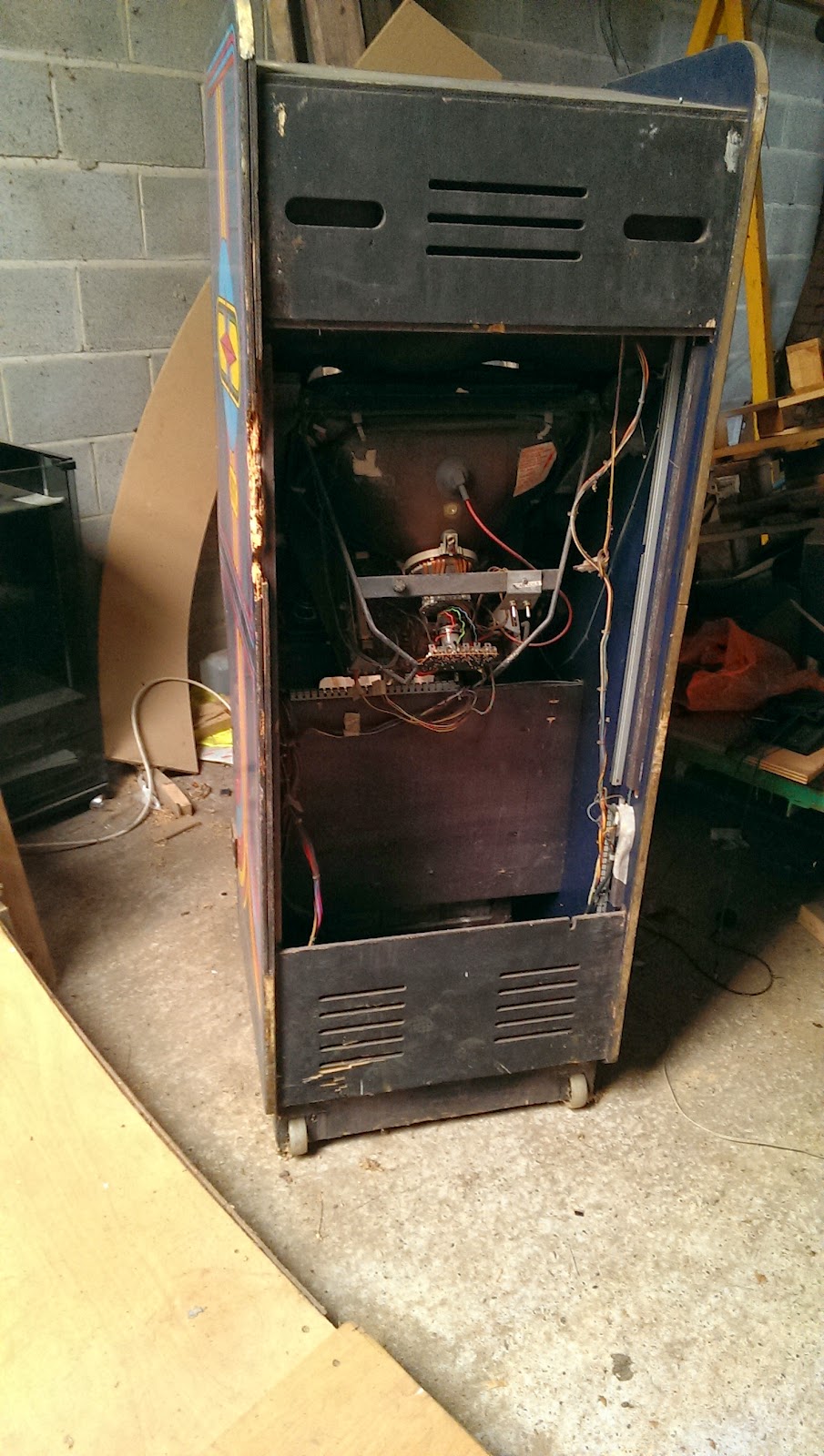 Here is the back of the machine. You can see its a bit of a rat's nest of wires but in a logical way if you know what's connected to what. And you can also see the bit of the machine I was the most scared of working on. The Fly-back on the monitor. Its the lead connecting to the back of the monitor with the rubber plunger. The monitor can store charge in it and unless its discharged correctly you can get a big shock from it and it can be really dangerous. So I've been putting it off cus I'm a wimp :-P haha.

Well I grew some stones and had a go at discharging it and from what I could tell there was no charge left in the monitor. Woop!

Onto the disassembly of the machine so I can clean it out. :-) 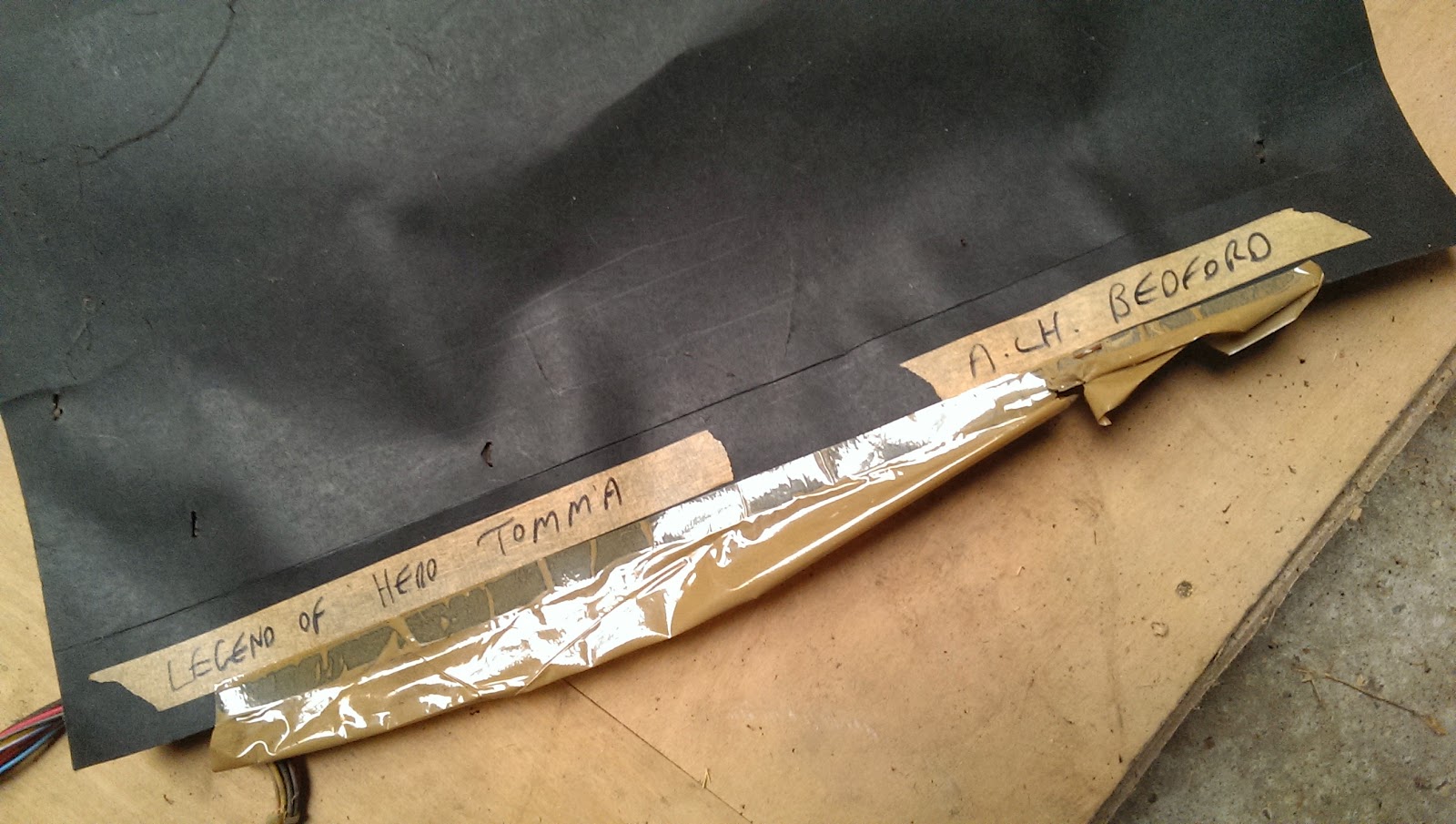 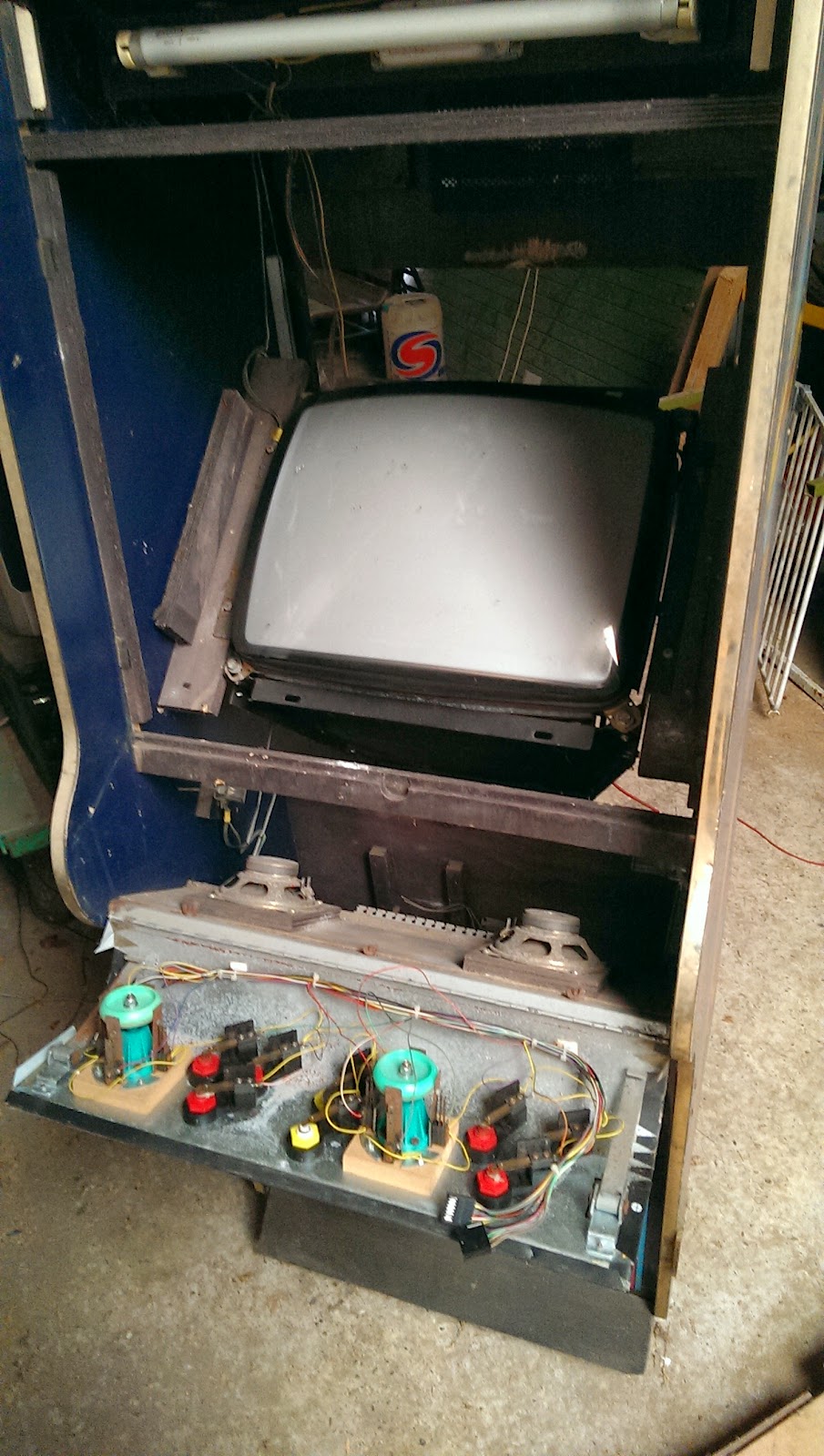 Here is the black out paper / card from around the monitor. It had to come out so I could get around the monitor to have a better nose and it got damaged. Not a big deal though, its only card so I will re-fit a nice new piece when I'm rebuilding it.

Here you can see the monitor in situ with the old-school control panel open. Check out those hockey pucks for the control sticks. Ugh!

To remove the monitor you have to unscrew the 4 screws around the monitor and if you un-hook the chassis it just slides out the front of the cabinet. I snipped all the wires from the monitor to the chassis as it was already broken and I don't know how to repair them. It just made it easy for me to remove it.

I also gave the front area a good brush down when I got the monitor out. 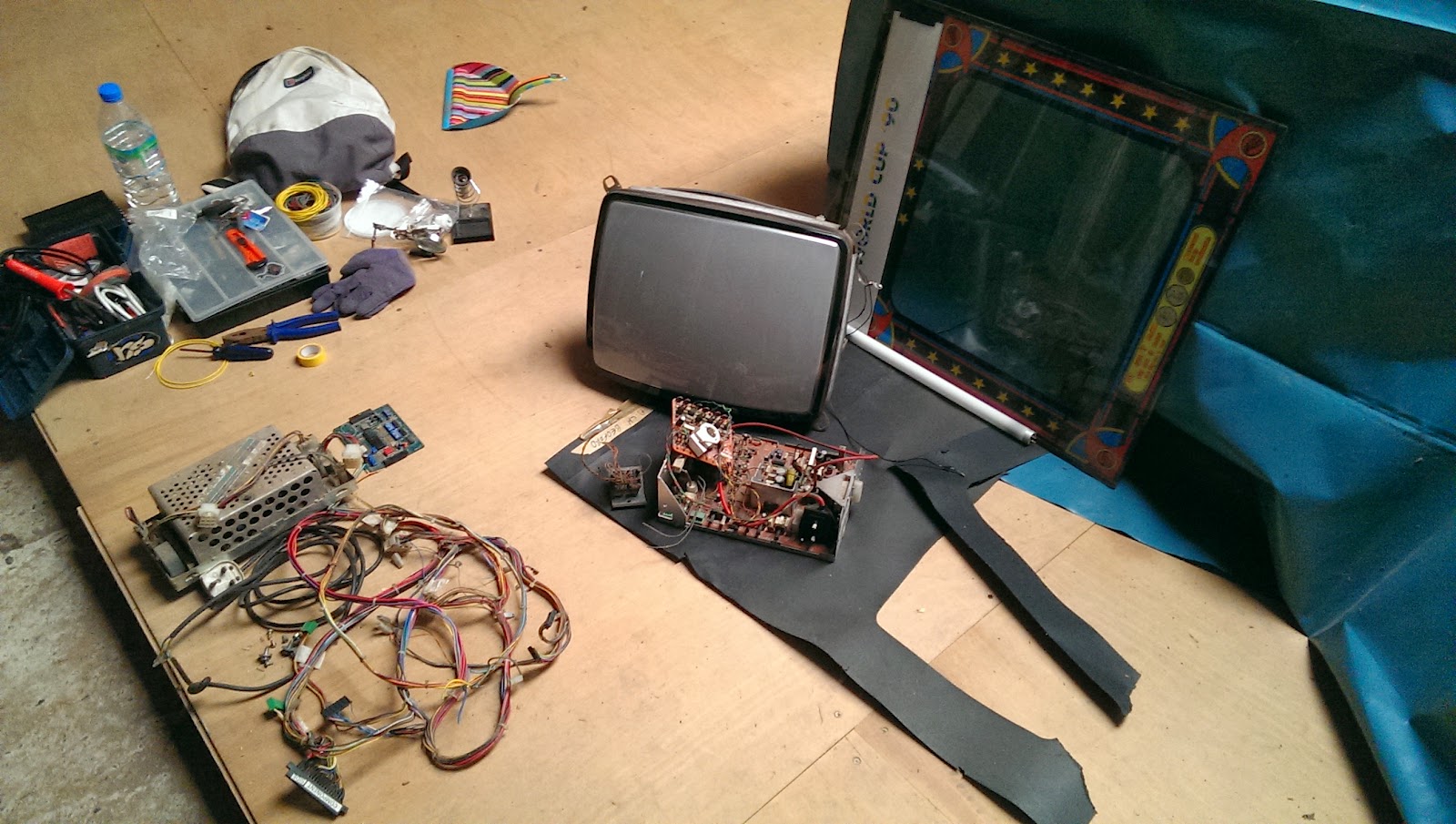 Here is everything out of the cabinet leaving it just a bar cabinet now. On the left is the power supply for the cabinet. This runs the game as well as the monitor and the top light. I don't have that kind of power supply and as I'm using a TV as a replacement I'm going to put a 4-gang power strip in the machine which the light and the TV will run from as well as the switching PSU to run the game. Essentially a Supergun set up.

Next to the PSU you can see the loom wiring that I stripped out. The Monitor and the chassis sitting on the black card surround and then the marque light sitting next to the front glass. 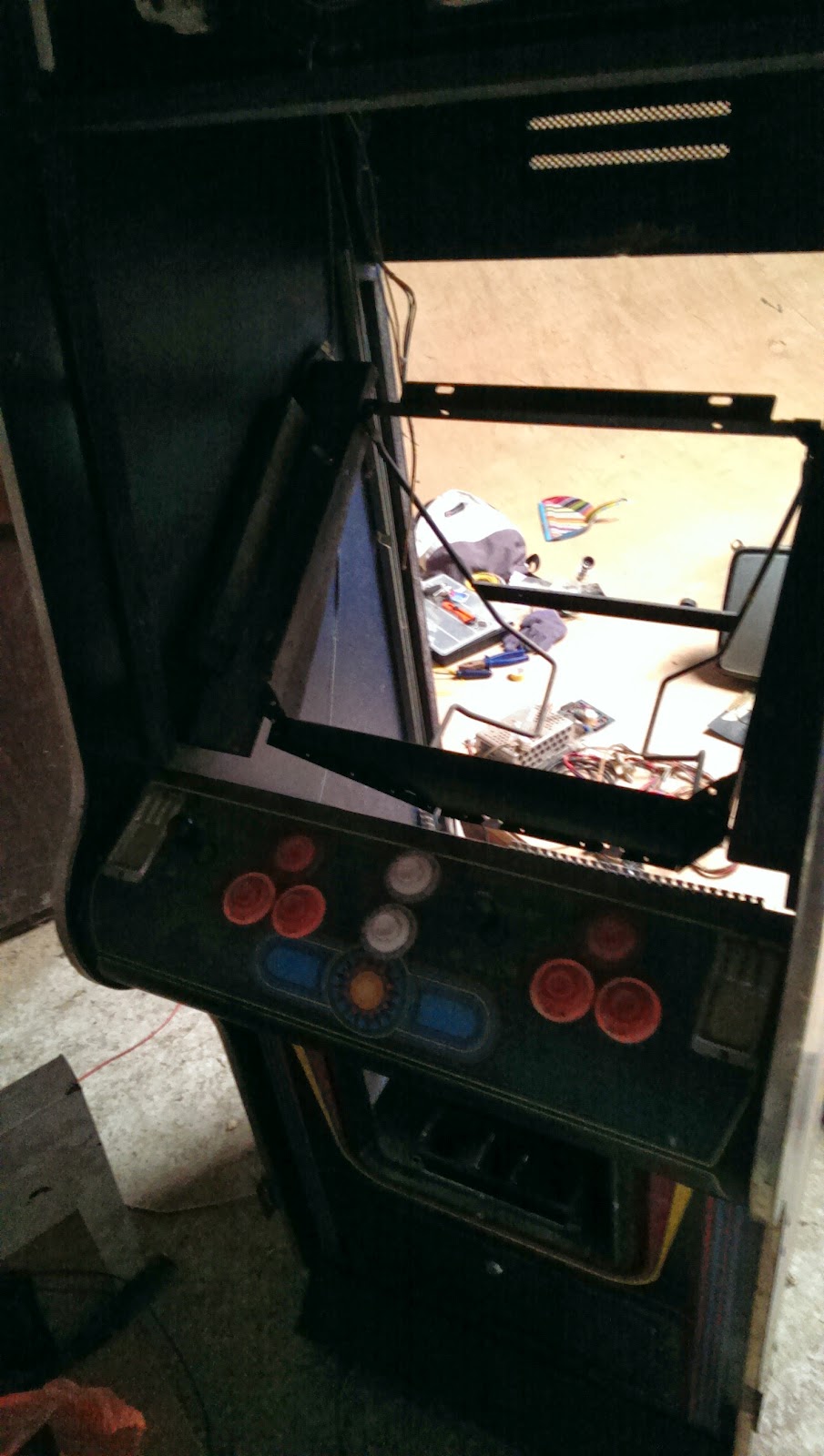 Here is the cabinet empty of monitor, loom, PSU and light. I'm hoping that the replacement TV will sit nicely in the monitor frame. Fingers crossed!! :-P 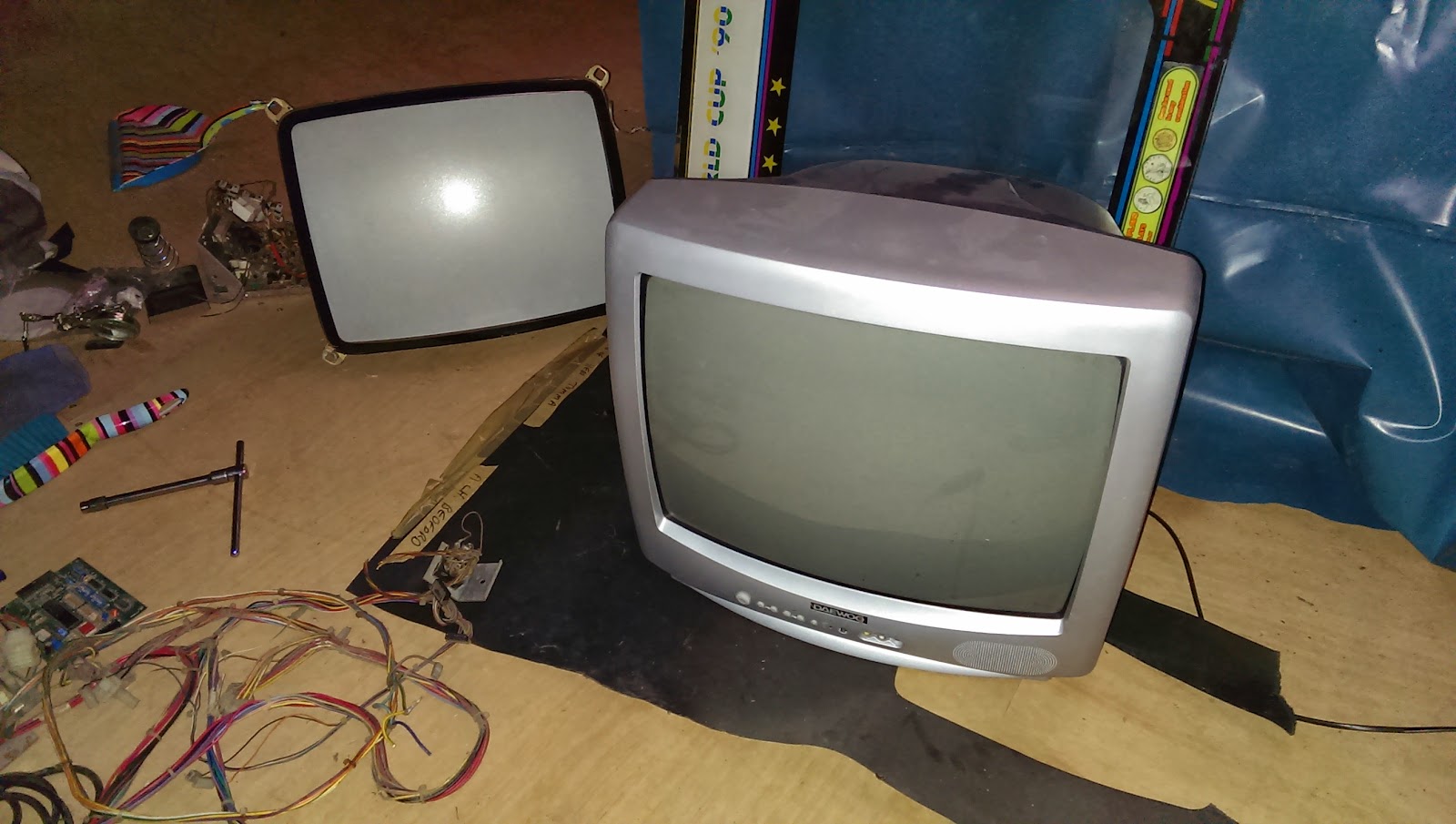 And here is the replacement TV I've been banging on about in this post. :-) I've half taken the casing off the TV as I wanted to check that it was going to have the tabs on the corners as the monitor does in the background. Thank fully it does, its how its held into the plastic casing. Phew! And from a quick measurement using some wire it looks like its the same width.

The next step will be to get the TV out of the plastic casing and get its chassis mounted in the chassis casing and see if it will all fit in the cabinet.

Catch you all on the next update :-)