I've continued working away on my Arcade machine project and have made significant progress. :-D

Where I left it last time I'd gotten the TV in place inside the cabinet and roughly mounted the chassis in to place so that the cabling would reach where it needed to reach.

Well I had last monday off work so I thought I would spend a good chunk of it getting the Jamma harness mounted into the cabinet and get moving on with sorting sound and controls etc out. In the week between the last bit of machine work and monday I'd received my new Jamma Harness and I'd spent some time wiring up the video cabling to a Scart connecter I had in my box of wires. I made up some R, G, B colour potentiometers so that I could adjust the strength of colour coming from each game and mounted them onto a perspex holder I'd made.

While I was at it I made a perspex holder for my Jamma Test switch as well. This will live behind the coin mech door. 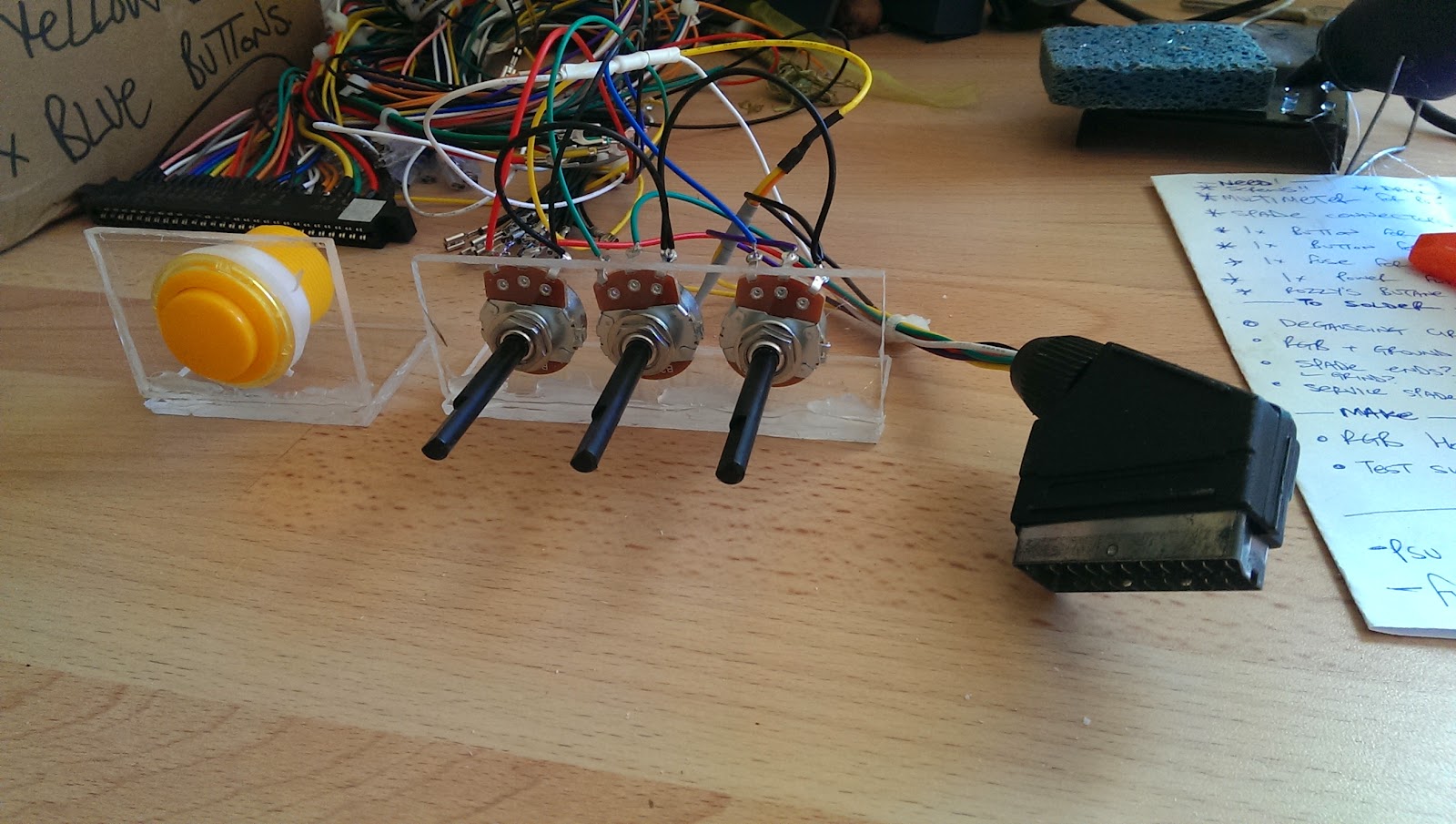 Full of confidence come monday I went to the farm and hooked up the harness to my power supply, flicked the machine on expecting a perfect image on the TV round the front. But what was on the screen was nothing but a diagonally scrolling screen of dissappointment. :-( There was a serious syncing issue!! The image was there, the colours looked nice and bright but the thing was scrolling at such a rate it made your eyes roll! This is an example of why you should test your wiring at home before going off expecting it to work. Darnit!

So I proceeded to try to problem solve the wiring while sitting with my knees up around my ears on the edge of the skate ramp. All the wiring was still attached from the trip from home so that wasn't the problem. I'd heat shrinked up my resistors etc to keep them in place, so I had to cut those away so I could triple check they were the right ones and low and behold the Sync resistor wasn't the right one! There was one colour on the banding that didn't match what my chart said. Unfortuntely I did have a replacement in my box so I had to go home to pick one up. On finding the right one I did a quick check and the resistor that was in the wiring was only a 56 ohm...it should be a 560 ohm! This has got to be the problem!!

So I headed back to the machine full of confidence again with the knowledge that this is surely going to fix the Sync issue. Soldering on a ramp is not easy I must admit so I think I will need to get a little fold up table or something for the future. Flick the machine on and POW! Sync issue is still there!! Officially I am stumped.

Instead of banging my head against a brick wall I decided to replace the control panel items and then head home. The original control parts are ancient! They definetly needed to go. Thankfully this step was a nice quick one and the buttons and joysticks look good in their new setting I think. 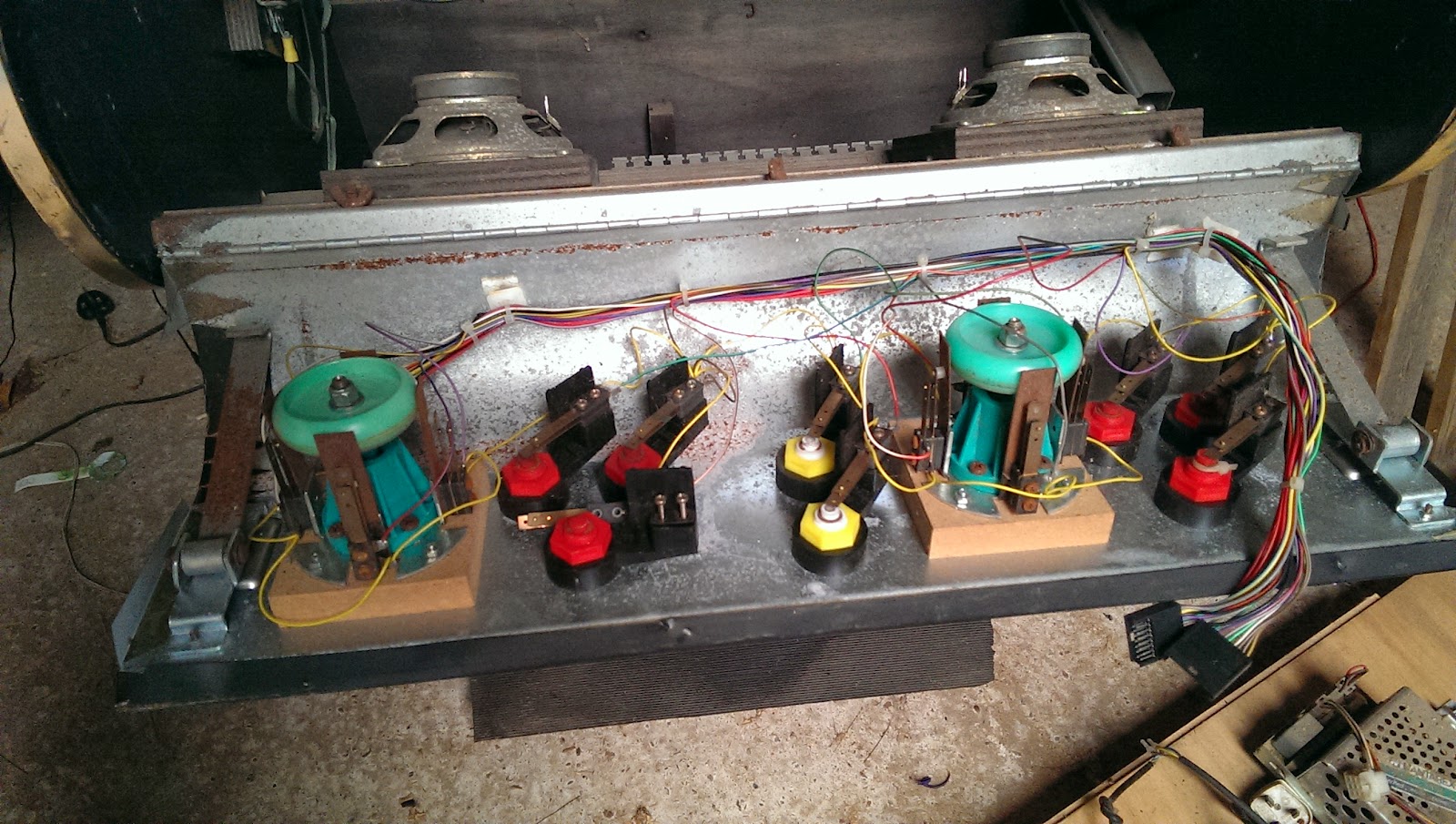 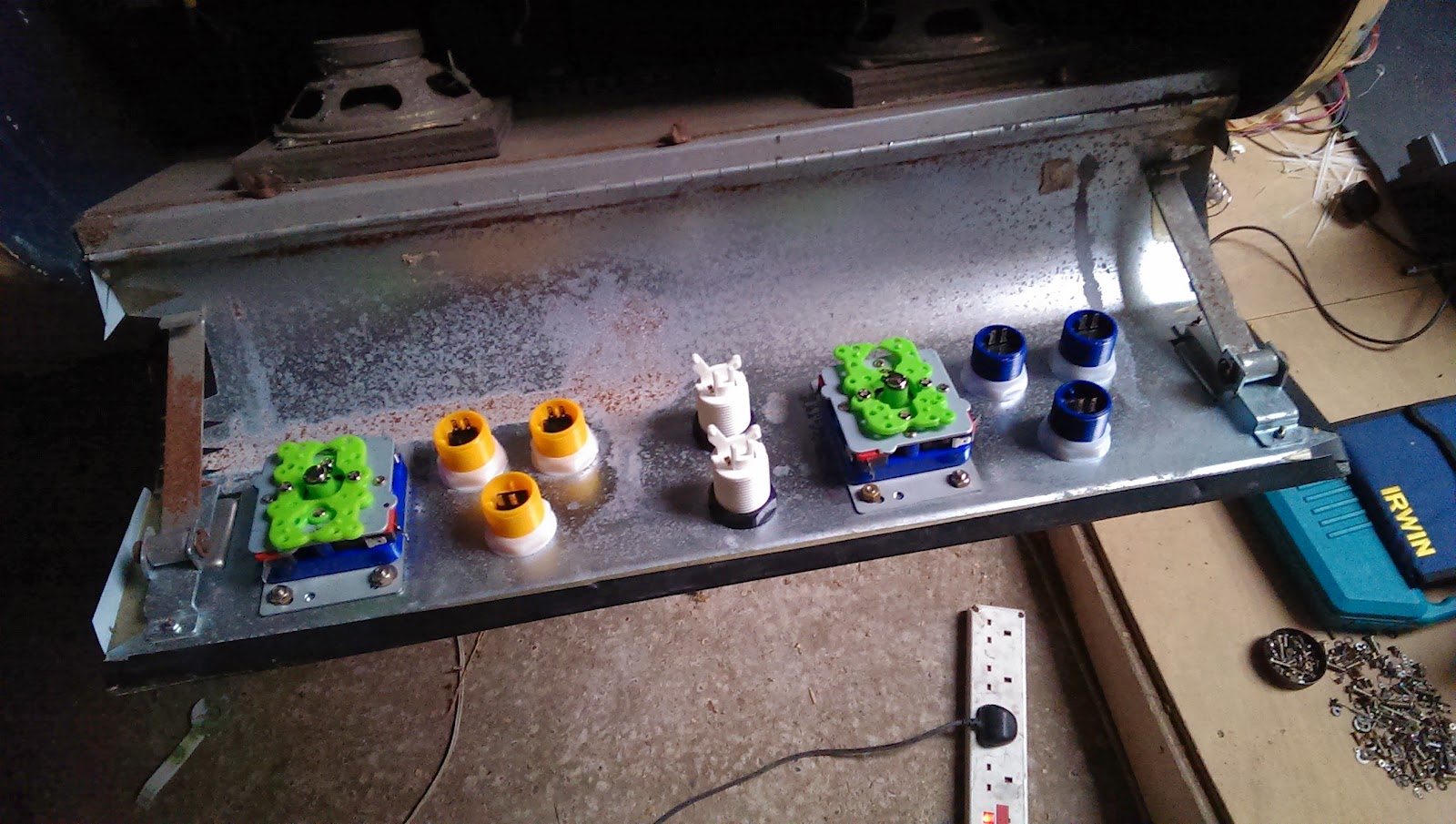 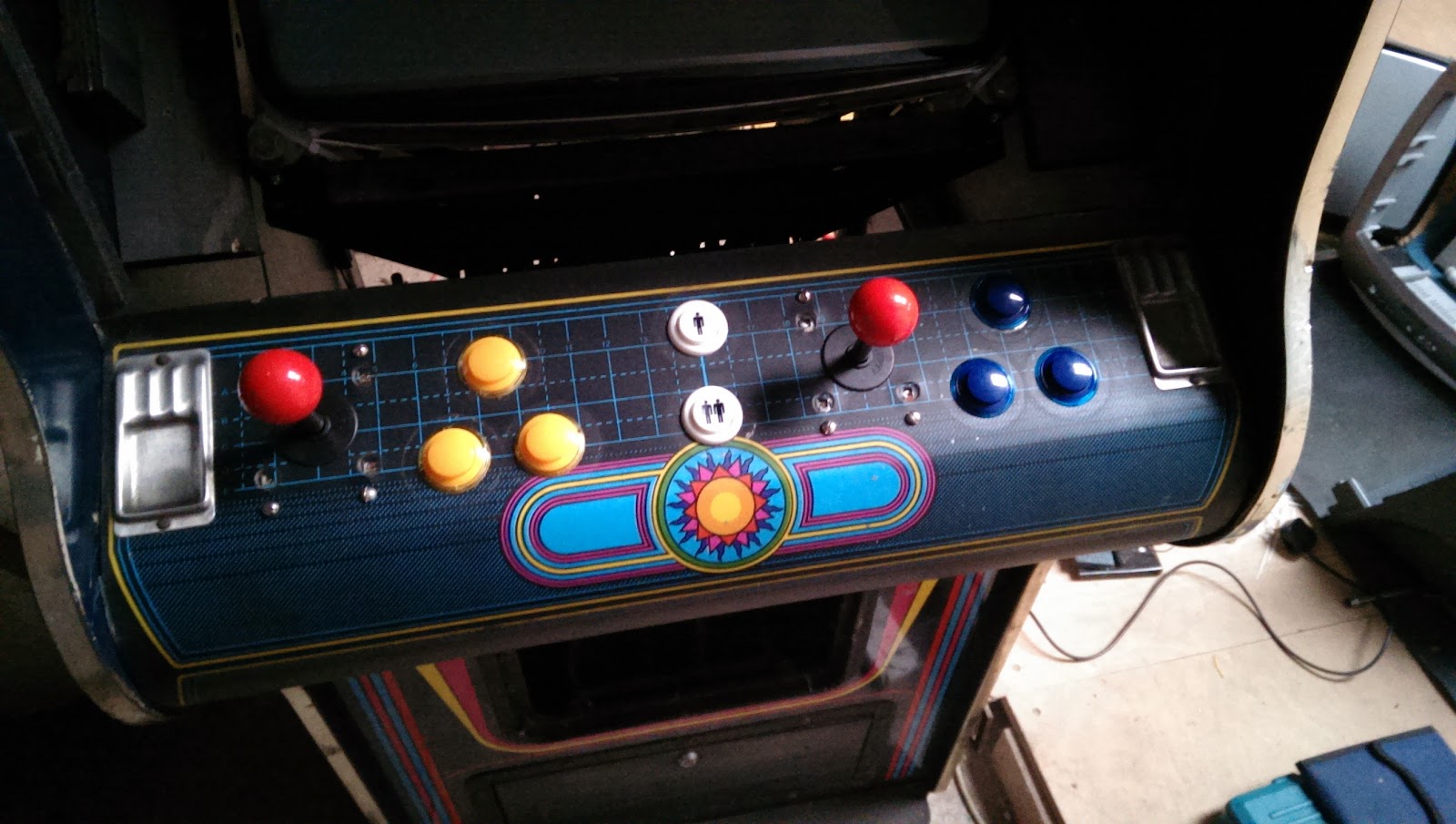 I pack up my stuff and head home and get thinking for the rest of the week.

Because I've been using up my holiday before our new allocation comes around in April I had Friday off work as well. So come friday morning I jumped back on to the Sync issue and decided to take off the scart plug as I remembered it was originally going to be a Sega Megadrive scart cable but I had issues with it so left it for spares.

I had a few spare PCB mounted Scart sockets so I got some new wire and hooked one of those up to the harness and BINGO! Worked first try! So my Syncing issue seems to be down to a dodgy scart plug. It must be the way I hooked up the ground links or something inside the plug, but for now that suckers being relegated to the back of the box! 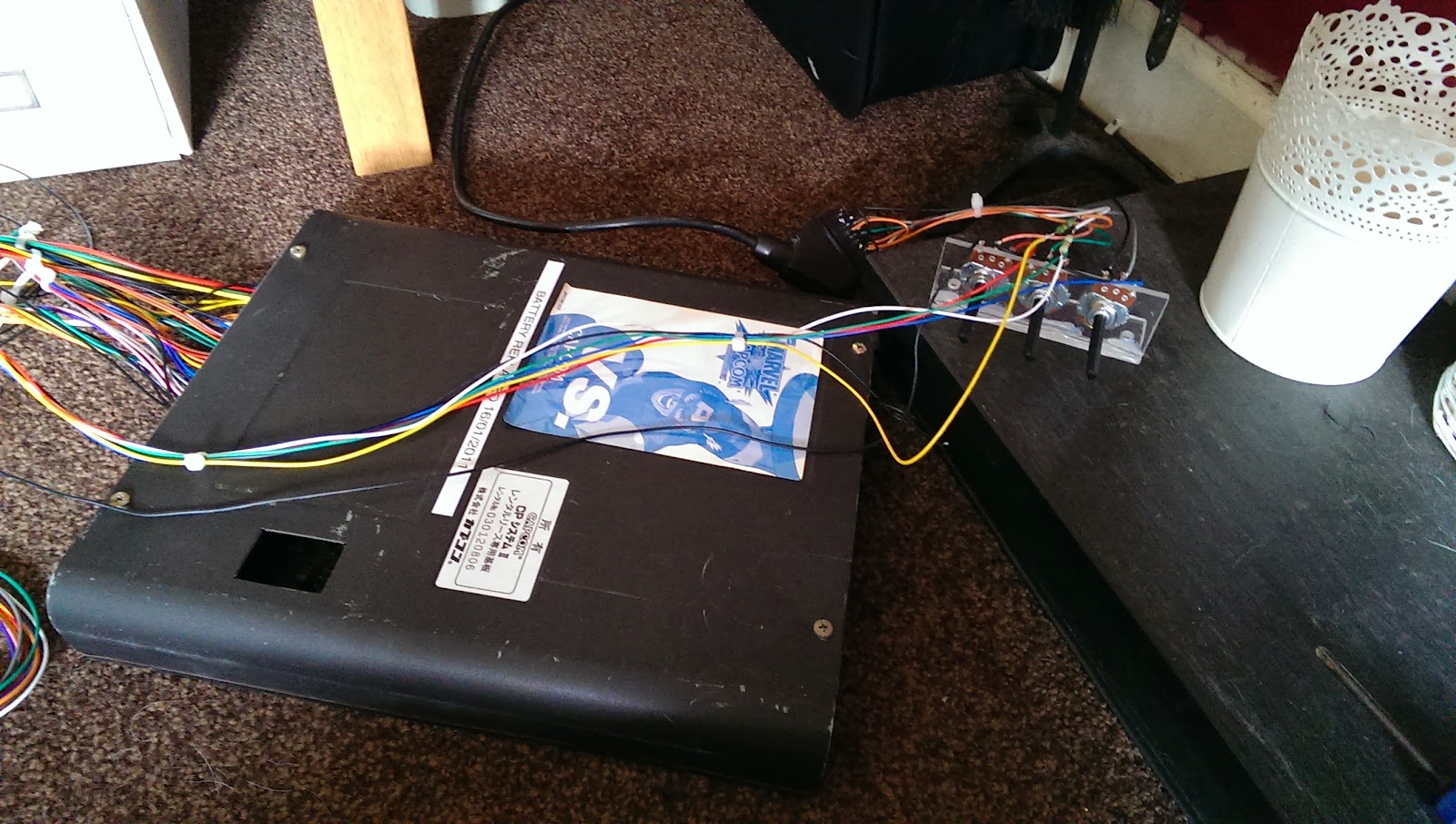 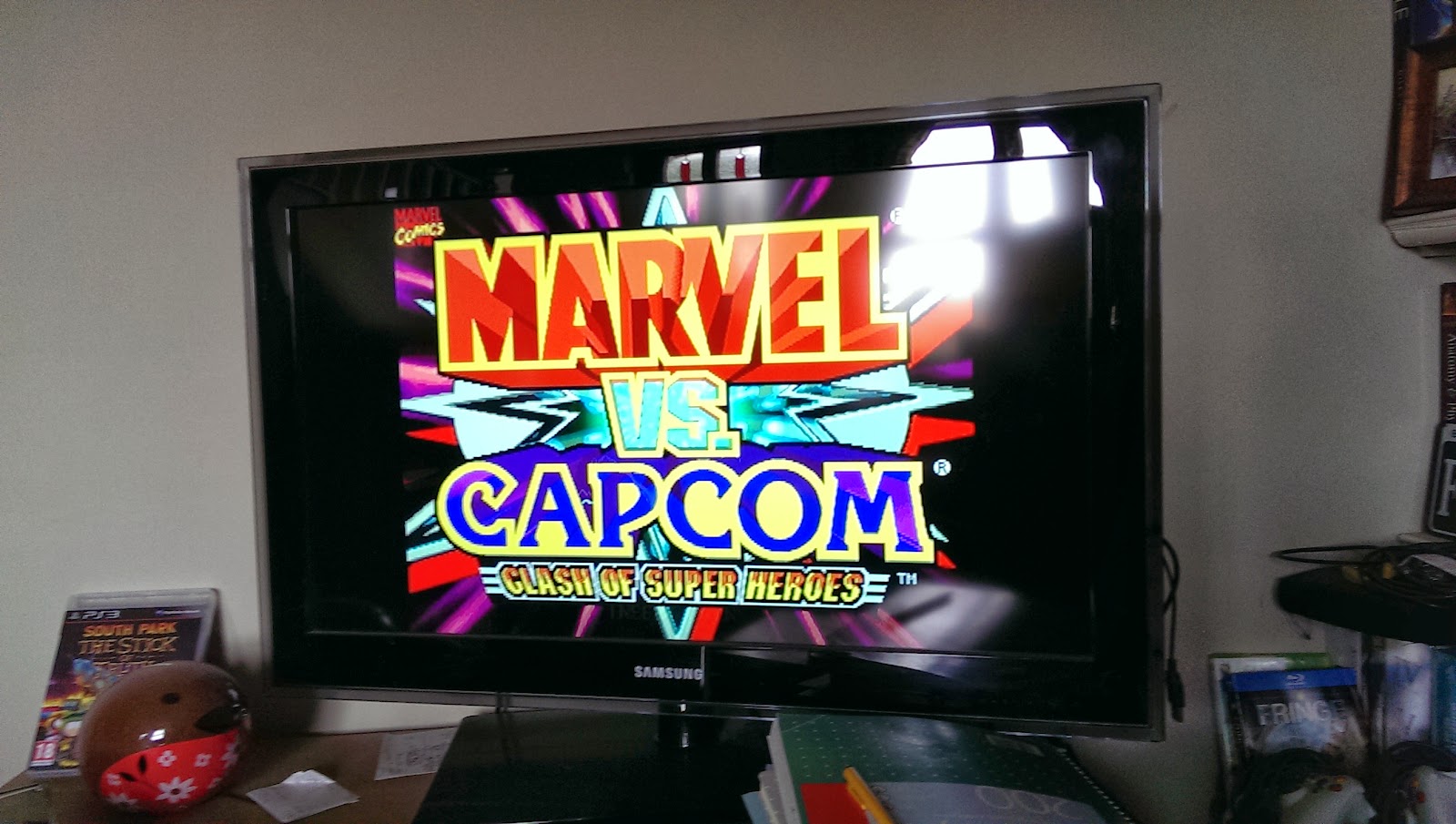 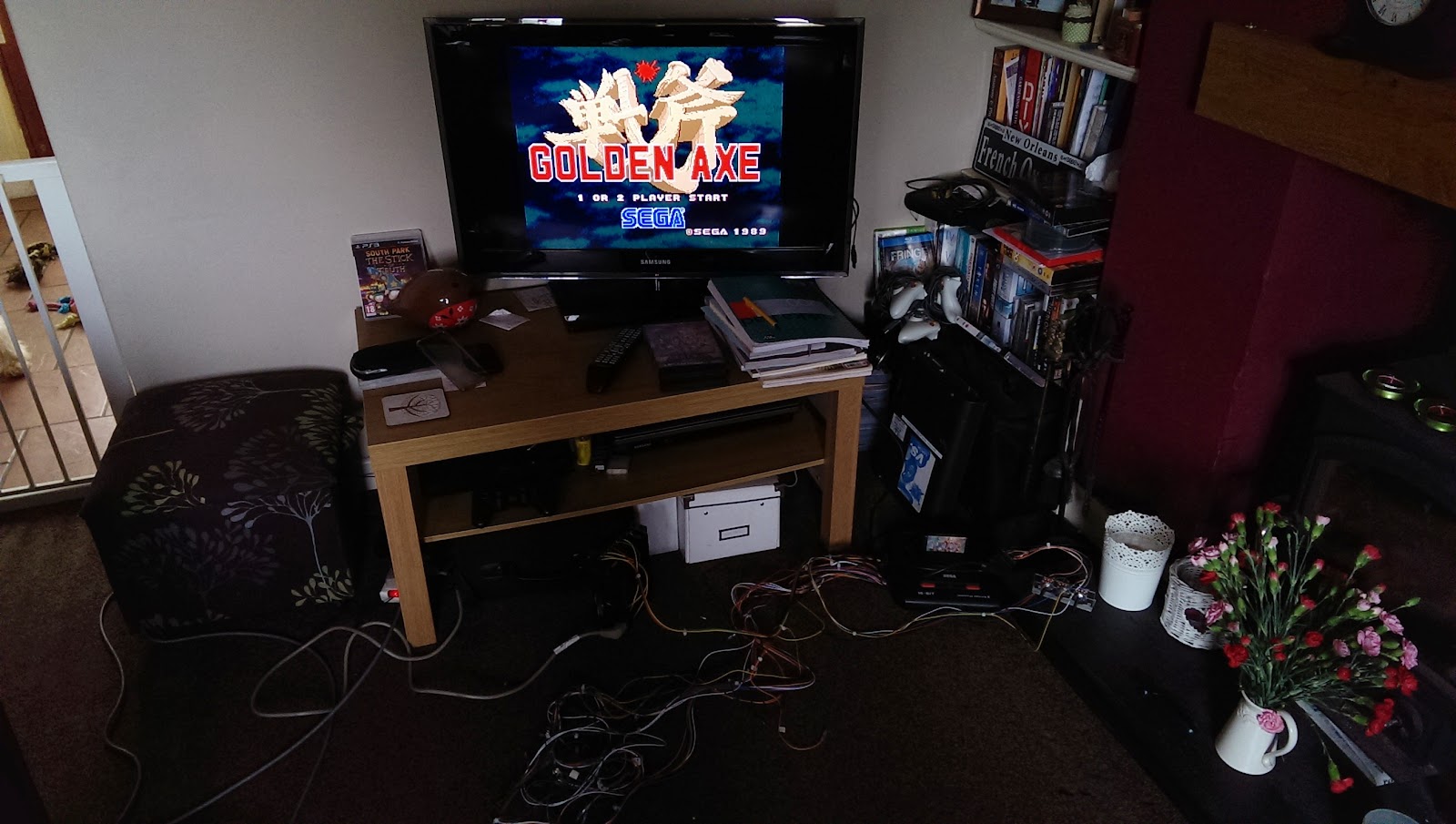 While I had the harness and game up and running I got my heat shrink heated onto the resistors and I hot glued the wires on the Scart Plug and Potentiometers into place. I decided to do it while it was up and running so I could keep checking that the wiring was still all in place. The last thing I wanted was to hot glue the wires etc and then come to check it all and when turning it on I'd glued a broken wire or something.

Full of beans I headed off to the machine and quickly hooked the power supply up to the harness along with my Supergun scart lead to the TV and KAPOW!! The thing is running perfectly now. Stable, bright image and full of awesomeness!! :-D IT. LIVES.!!!! 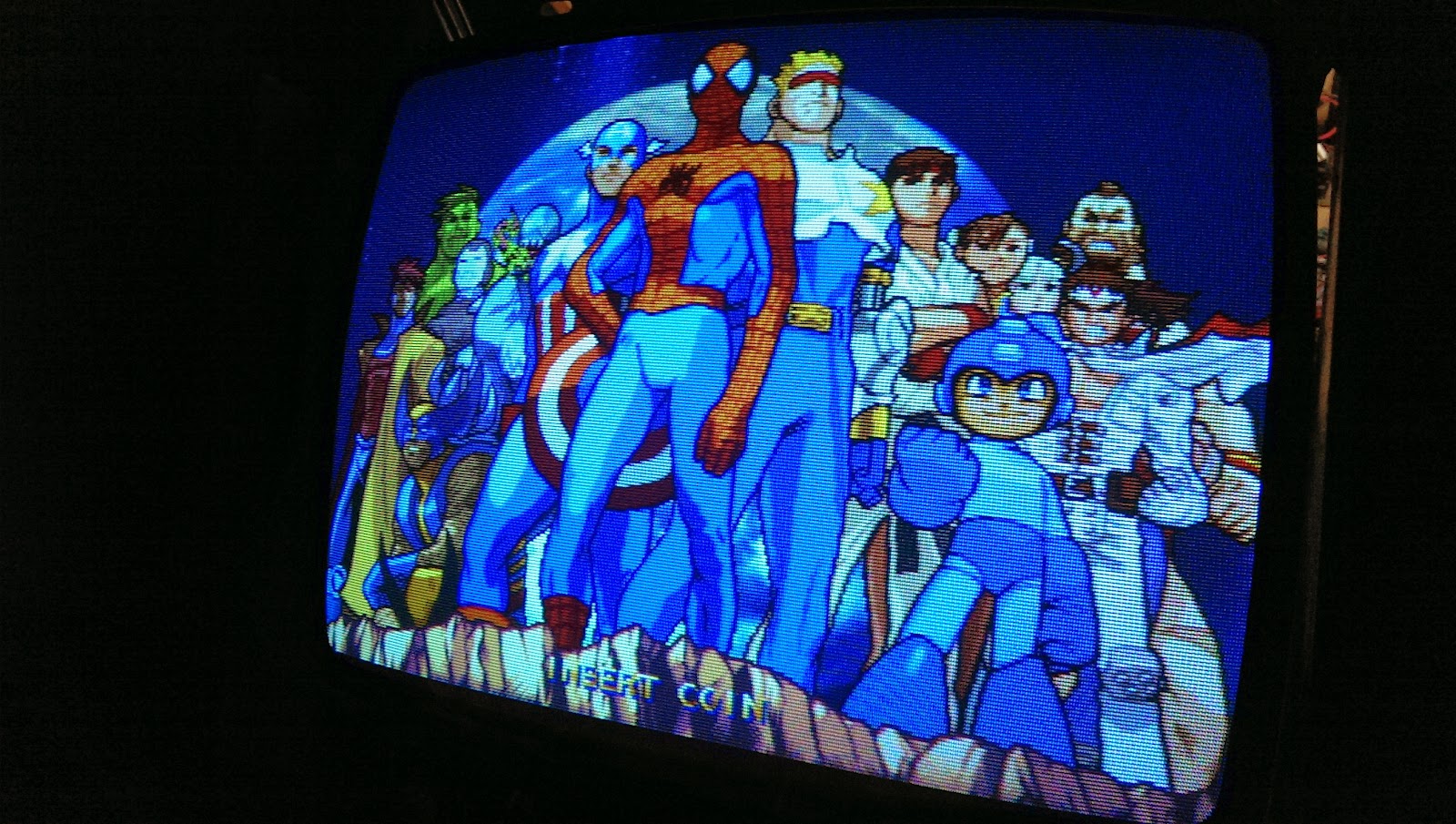 From here on out I got to work tidying up the harness in the back of the cabinet. Screwing into place the game power supply and finding neat ways to put the power strip into the machine and where to mount my RGB pots.

As I continued to work I took progress video's instead of photos so I have no more photos for this post but I've uploaded the videos to Youtube so here is my dorky voice walking you through the rest of my days progress.


As you can see in the videos I've gotten sound working, the harness routed through the machine and both Players controls set up and working! A freakin arcade machine! :-D

I must admit that I feel very proud of my progress with this project! Never in my wildest dreams as a kid playing arcades every chance I could did I think I would have an arcade machine of my own! And here it is. :-D It still needs a lot of work to finish it off but the bulk is done, it works. So next is polishing really.

I'm going to be making a CPS2 compatible kick-harness next and then drilling the extra button holes into the metal control panel. Sorting out the marquee light and cleaning up the glass and coin door as well as mounting it back to the machine.

I'll be putting up another update on this project soon :-D