I've been a little slow on updating about the Neptune I know. I've been trying to get some more work done on the case but its mainly just been along the lines of : tickling it with sandpaper, noticing that more needs filling, waiting for that to dry over night then sanding again. But in little bits when I wander past the case on the side in the kitchen.

Well today I got my dremel set up and got some cutting done to the lower half of the case ready to start adding milliput to it and get it into a more curved shape. I also did some of the top cases ' holes ' with the small etching drill bit which need a bit of smoooothing out. We nipped out into the local town and I plopped down some cash for a can of Matt Black paint for when the case will be finished. When we got home I went outside and sprayed a couple of layers of white primer all over the case which showed up a lot more work to be done smoothing and sanding and shaping. Its a lot harder to see areas for correction when it is a mixed mess of white and green milliput and black original plastic.

After I sprayed it white and admired it for a while. It really does look nice in white!! If I make a few casts of the case one will definetly be finished in white! 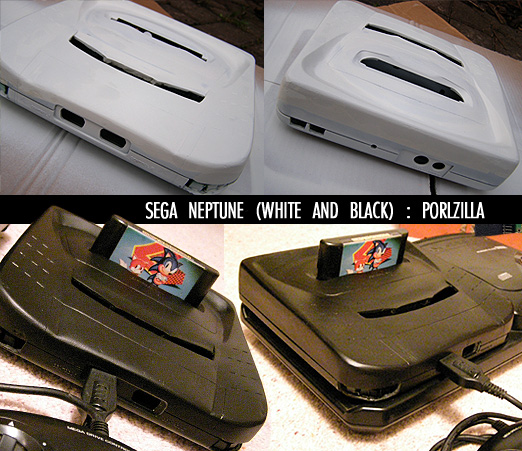 Yes, so after it went white I couldn't resist giving it some coats of black paint to get an idea of how it will look in the end. It looks pretty tasty in black and sitting next to a Megadrive 2 it looks really different and very cool! You have to look past the work thats still needed and pop some imagination on there but I'm pleased with it so far.

Oh and the second shot of it in black on the picture is the Neptune case sitting on the MegaCD 2. This is one of the main reasons I decided to modify a Megadrive 2 case, so It would still be compatible with the MegaCD 2 as the Neptune mod still works with the CD's. :)

So there you go, the Neptune case is still rumbling along. I'll be continuing to sand the sucker to oblivion and try to get it as good as I can, I'll also carry on working on the buttons and try to get them in a presentable state.

Have a good weekend y'all


P.S. Both of the paintings I posted about below have now sold. Very happy about that! :D