Today has been our first free sunday in a long time and we put it to good use. A pretty full day involving putting our guinea pigs out in a new outdoor run to munch on some grass and doing the first load of gardening in our new house. It was great fun being out in the sun.

I've recently been given the chance to rummage around an old barn in a farm I know and have some stuff and low and behold there is an old arcade machine in the back against the wall. The guy said I could have what ever I wanted from in there because it would all be going to the bin. So where did I ferret first?! The arcade machine!

Turning the machine round I saw that the back board was off it and I could see into it. The description of an arcade machine being a wooden box with wires in really does it justice! They are a bit of a surprise thats for sure from what I imagined. There is the Arcade game PCB screwed to the back of a centre piece of wood with the harness leading off it that splits and goes to the power, monitor, speakers, control panel, marquee lighting and power switch. It really is just a bunch of wires! 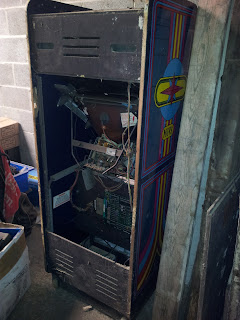 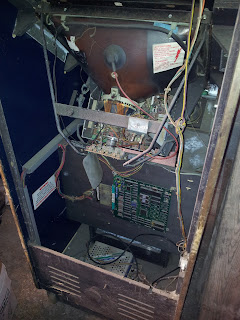 Looking at the marquee at the top of the arcade cab' it says "World Cup '90" which was a Jamma game from Taito. Jamma is a good sign cus it means that it will run on a SuperGun. When I checked the board it has Toaplan Co Ltd. written on it which doesn't match the marquee. A mystery! I like it!

I got the machine fired up with a little hooking of wires up (and a mystery pcb that I found in the cash tray area) I got the game to fire up with sound but the monitor seems to be dead. And from what I've read on the 'net about them really needing to be discharged before they discharge all their stored voltage through you and getting really hurt. I'm not messing with that!

I did a quick google search on my phone and it said that Toaplan made side-scrolling shooting games. WOOP! I really got my hopes up that it might be Zero Wing which is a game I loved on the Megadrive.

I unscrewed the board and got it home and compared some photos of boards on the internet and it looks like its a game called Teki Paki. A tetris style puzzle game. A bit of a shame cus it's not Zero Wing but still pretty cool. And it was neat sticking my head around an actual arcade cabinet.

I was really tempted to take the harness out and cutting all the connections so I could turn it into a SuperGun but I don't think its worth the hassle, especially as the board has a Jamma converter on it to attach it to the game board.

When we got home I started sanding the Neptune case to see how smooth I could get it. It ended up looking a lot like a charcoal rubbing!! When I showed my girlfriend she said it didn't look like I'd made the case and shape, more like I was sanding a proper one down to paint it. I was well chuffed with that cus Its hard to see how a project is going sometimes because your too close to it.

Here is the 'charcoal rubbing' Neptune case on my work area with the Teki Paki (? ) arcade board next to it. 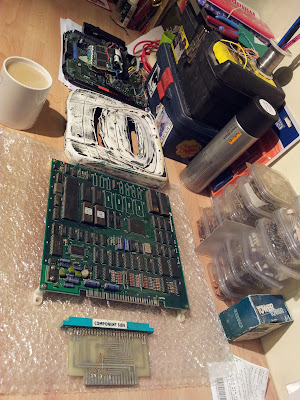 I'm going to see if I can finish soldering up the A/V out wires on the Neptune and fix my fixed trace on the bottom of the Megadrive 2 board to see if it will actually work. I'm not holding much hope but I'm going to be finishing it off and bolting it down so that I know that it will all fit in properly into my case. This is quite important to me incase I wanted to make some casts of it and offer it to other Neptune owners.

It's been a great day with adventuring around a barn of goodies, doing some gardening work, Neptune case work and getting some telescope time in. Looking at Venus, Jupiter and Mars along with the Beehive Cluster and The Orion Nebula and Running man Nebula.

Hope your's was a good one too!