A BLAST FROM THE PAST

While I was at work and taking one of my "eyeball breaks" out of the window to give my eyes a little bit of a rest I looked down and noticed my photo of mine and my dad's first study at our old house. It bought back a massive rush of memories, nostalgia and a huge smile! :D 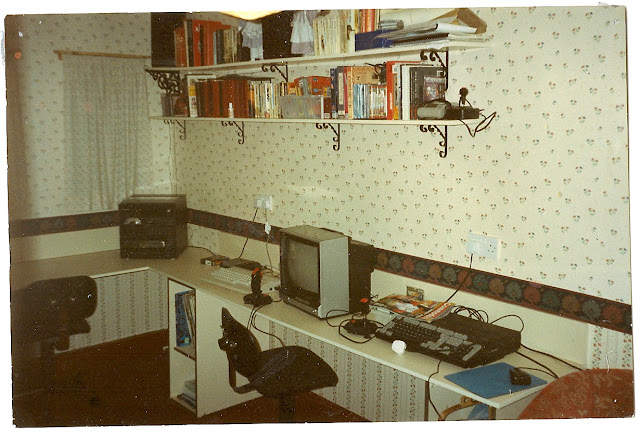 I cant exactly remember when this photo was taken, im pretty sure it was when I was a teenager in school which will easily be around 20 years ago. Flippin egg!! 20 years!! Man that makes me feel sooo old!

Anyway haha whats in the photo then? At front on the right is my dad's and my first IBM PC. It had no harddrive if I remember right, but it had 1 whole 3.5" disk drive. Oh and it was an 086, a real beast! It ran on that TV to the left of it which is in that position because its hooked up to my Commadore 64. When I look closely I think the game next to the tape drive is Turrican. An awesome game!

Up on the shelf are our 2 PC joysticks which were a must when we played Elite. Next to those on the shelf is a game called "Neverworld", our 2 PC manuals, 1 which is a GW Basic manual which I messed about with. Some games I cant make out, then Conquests of Camelot (which I finally completed while doing my English Literature revision haha), a game I cant make out then "Their Finest Hour" which was a brilliant WW2 aircraft game. :)

A real blast from the past for me that photo is. Its now next to my PC at home now rather than at work.

This evening I fancied a go on my good old dreamcast. Play a little Streetfighter Alpha 3, Metropolis Street Racer and Sonic Adventure. I set the machine up, power it on and get the Date and Time screen but I cant change the settings because the controller doesn't seem to be working. Wierd! I tried my arcade stick and still nothing.

A quick look on the internet and it seems to be a common problem with the dreamcast. 1 or 2 of the capacitors on the controller port PCB can go. The way to test which one is to get some needle nose pliers and twist the capacitor round until the legs touch and cause a circuit. Then when you test the console you can see if the controller is working again.

I twisted the main middle capacitor around and tested it and the controller worked! Woop! Rebuilt the case and tried to set the time and date and it didnt work again. So I opened the case again and gave the capacitor another twist, rebuilt and it worked again. But my arcade stick isnt being recognised. I'll have to change out the capacitor at the weekend so I can get it all working again. But I'm glad its still working after all this time. :)

Also Its the first time I've seen the multi-region mod I had done to it a few months after I bought it when they were first released. A very small brown taped parcel. Very neat.

Anyway. This was 'ment to be a really quick update but I've ended up typing loads again.