I thought I'd make a little post about a new arcade game pickup I have. Its something that you don't see all that often when you search for Capcom CPS-2 games. Normally the CPS-2 setup is an A-Board mated with a B-Board which is the game. This version of the CPS-2 is different because you don't need an A or B board, its all on the one PCB in a nicely shaped metal case. 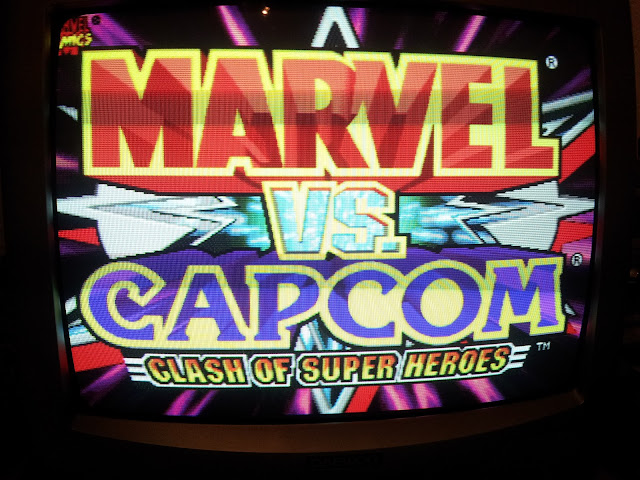 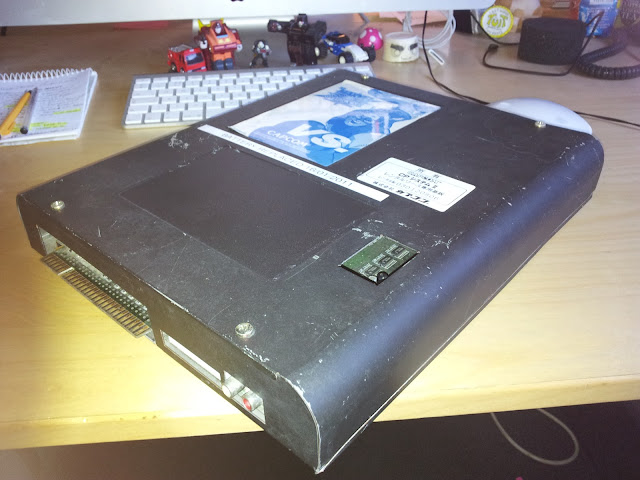 When the game turned up in the post I was very surprised at how small it was compared to a normal CPS-2 board. I was expecting it to be of similar size to the A+B setup but the whole Black board is shorter in length than the standard CPS-2 and also thinner height-wise than a single CPS-2 B-board.

As you can see in the photo its got some nice curving to is on the edges. When you think of metal casing, or when I do I think of just a box. But this has some nice shaping to it. The problem with it being painted metal the wear and tear to it shows up and there isn't really a nice way to clean it up. Other than sanding it back and repainting it. I won't be doing that though :-P

Also, you can see from the photo that it has the standard CPS-2 connections to it. Jamma edge, Kick-harness connector and the 2 QSound ports. The volume and setup buttons are different though. The hole you see in the top of the casing lets you twiddle a PCB mounted potentiometer which controls your volume rather than the 2 UP and Down buttons on the side of an A-Board. And the Setup button is a PCB mounted mini button set a little bit back from the Jamma edge rather than the button thats on the side of A-Boards. 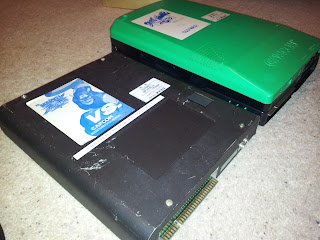 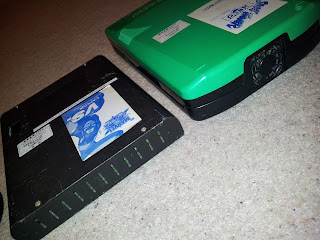 The 2 photos above show the size difference between the standard CPS-2 setup and the Black All-In-One boards. Also you can see the venting that is in the back of the Black board. As there is no fan in the All-In-One boards it has venting at the back, the volume hole on the top and the Jamma edge connector area are all used to let heat out. And I assume that the metal casing will work as a bit of a heat sink as well.

These boards also differ from the normal CPS-2 setup in its Suicide battery replacement. With the normal CPS-2 B-board you can just switch out the battery with the game board all opened up and just on your work bench away from your Cabinet or Supergun. The Black All-In-One's need to have power to them while you change the battery otherwise they will suicide on the spot apparently. So you need to have the game connected and running (I guess so you can see that its still working when you disconnect the battery) the whole time, being extra careful that you don't short anything as you do it. A rather scary process I would think. Thankfully this game has had its battery changed last year so it has a good bit of time left on it.

Also I've had to have my Vampire Hunter CPS2 board phoenixed recently and the guy who did it for me said that he could more than likely bring the black board back to life too if I mess it up. And he's local! Brilliant! :-P

As well as the board itself being a little bit of an oddity in the CPS2 world as the plastic A+B setups are more readily available the game itself is brilliant!

It has one heck of a character roster! A good selection of the greatest Capcom characters VS most of your favourites from the Marvel world! With the great art style of Children of the Atom and the other VS's series. The Sprites are massive and so well drawn. Its really a work of art! 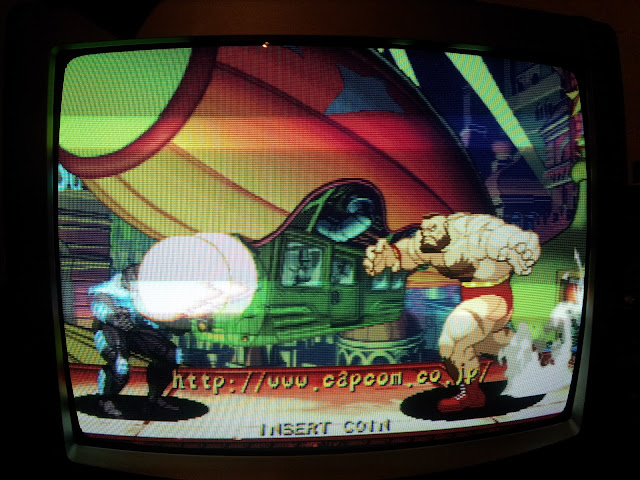 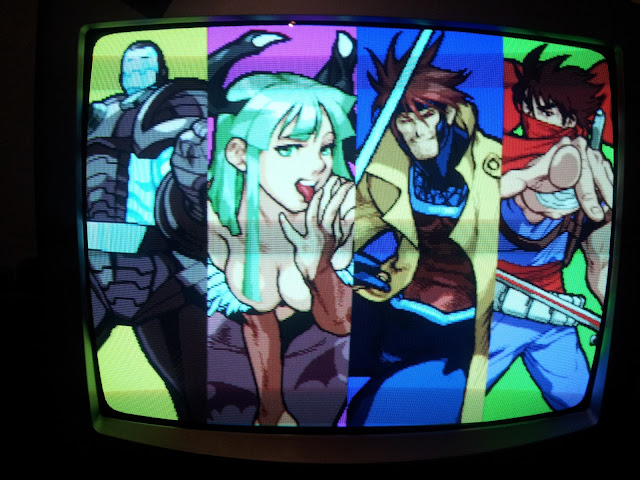 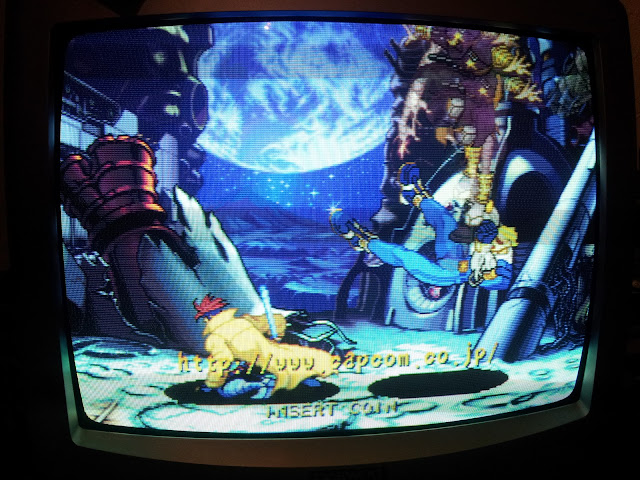 Here are some images to show the first stage of the final boss, Onslaught. If you thought that The Hulk, Zangief and Venom were massive then check him out!!!! 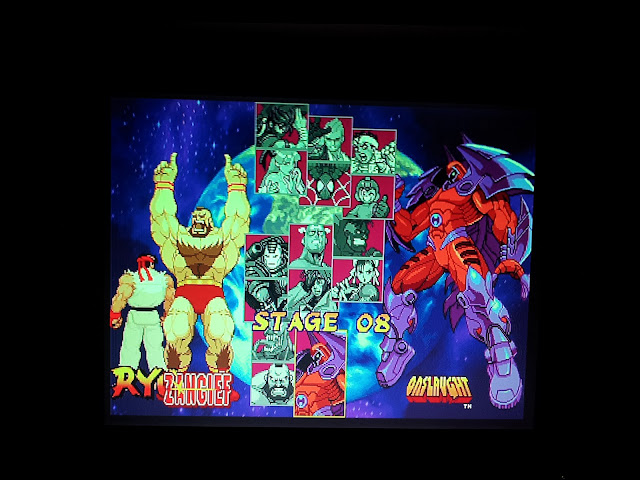 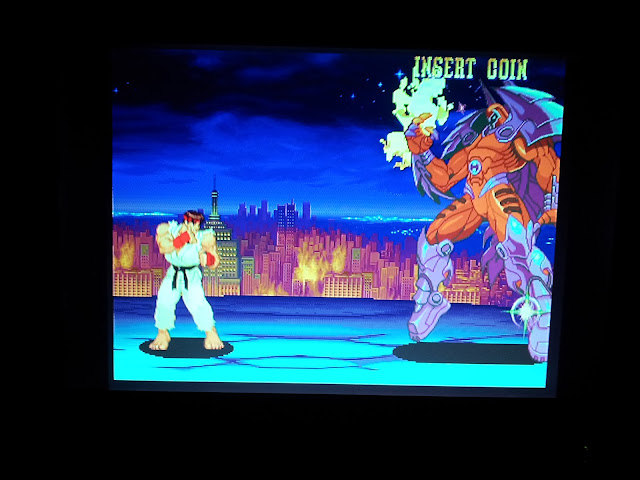 The first few photos are from me testing out the game on a CRT TV hence the slight doming to the photos. The final three photos showing Onslaught are from my little Flatpanel LCD TV I use my Supergun on.

I can't really think of anything else to write about the game. I'll try to get a little video tour of it recorded and put on my Youtube channel and linked here.