I thought I'd make a post on something that had been playing on my mind for a couple of months. And the thing that had me thinking and questioning was "why does no-body overclock the model 2??". Sure I've seen the Screen Savers video on youtube where they describe how to do it by pinching the clock speeds from the cartridge slot. But I was never convinced with this way of doing it and the guy in the video doesn't get it to work that way. And the way they show the overclock is on his model 1, which is what you find all the overclock info on. Overclocking the model 1.

Well, the way described in the video involves using quite long wires to do the overclock which from my understanding would cause problems because of the length of them. In the model 1 overclock video I've followed Damomonster explains that wires longer than 3 inches will cause problems with the overclock.

Last week I managed to find a very rare video on youtube of someone claiming to have overclocked their Genesis 2, and the way they did it was the same way I'd overclocked the model 1. Using a 10mhz crystal on some vero board mounted on top of the processor. But since then they have taken the video down, so now there are none. Except mine now I think :-P

I've been thinking that if you know which pin to lift on the model 2 processor then in theory you can do the overclock the same way as the model 1. You'd just have to know where to tap your +5v from and where a nice close point would be to get Ground.

Well its pin 15 that you want to lift on the processor, just like on the model 1. The processor is the same as the model 1 but in a smaller form factor. Now we know which leg to use we can begin ;-P

Right, I think I'll write this point for point.

(1) -- first thing to do is to make the 10mhz overclock 'package' described in Damomonster's great step-by-step guide :

A thing to remember is keep your wires nice and long to begin with so you can trim them down to size when you come to mount it and hook it up to the processor.

(2) -- now you've got the 'overclock package' made and insulated up with electrical tape and some nice long trim-able wires we can go to the Mega Drive 2 (Genesis 2). Open the sucker up by removing the 4 screws underneath, then remove the inner metal shielding. For me I find it easier to take the whole motherboard out of the case so you can rotate and investigate it easier.

(3) -- Now the board is out of the case you need to find the processor, which is the square chip in the back right hand side of the board behind the cartridge slot. 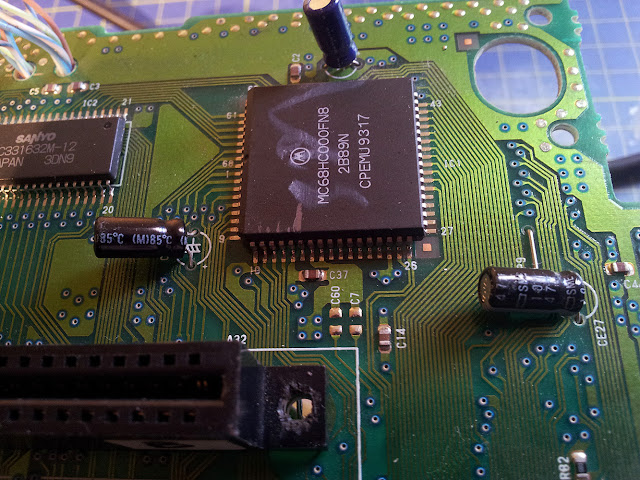 The next step is to find Pin 15. I've marked this on the photo in pencil. Sega have been nice to us and have numbered the pins on each corner of the chip. You can see Pin 10 on the bottom left of the chip, so we count across to the right and find Pin 15.

(4) -- The next step is to get the soldering iron out and get it warmed up. I don't know how much heat the legs can take on the processor as they are very small and fiddly to get to so I would recommend a lowish wattage soldering iron with a thin tip on it just in case. I used a 15w Antex for doing this with a small wedge shaped tip. A pencil shaped tip would be even better I think.

(5) -- Now the soldering iron is warmed up and we have Pin 15's location we need to warm the pin. I did this by pressing onto the side of the chip and the soldering pad area and got a thin Pick tool behind the leg. You need to be very careful here as the legs are deceiving! They aren't sticking out from the chip, thats the soldering pad that gives it that look. The leg is actually wrapped back and under the chip to raise it from the PCB. To give some ventilation I assume.

While heating the leg gently wiggle and bend it outwards. Remember, take your time so you don't pull the solder pad up at the same time!

You should end up with the chip looking like this : 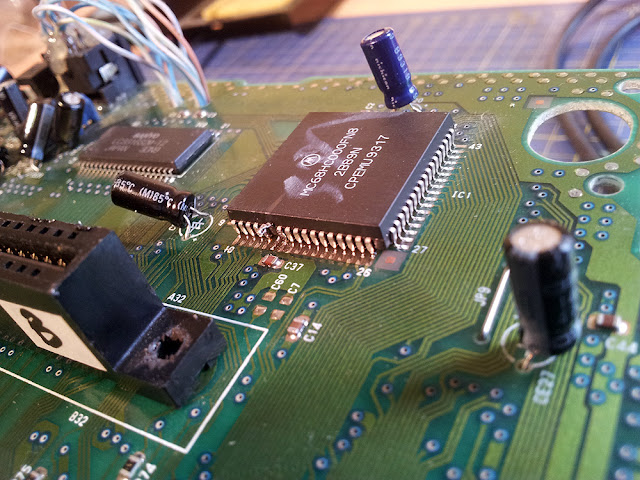 You can see Pin 15 now lifted free from the board and the solder pad is still underneath.

(6) -- Well done!! That's the scariest part done! The next steps are delicate still but that was the hardest bit.

Now we need to cut 2 wires, strip the ends and tin them. The wires want to be just long enough to reach the back of the case.

This is the most direct and shortest route for the wires to go. We need to keep the wires as short as possible but still able to reach our Double Pole / Double Throw switch so that we can still switch between the stock speed of 7.6mhz and 10mhz. This way we can still use the Mega CD and 32x because we can revert back to stock speeds.

(7) -- Now we carefully solder 1 wire to the solder pad under Pin 15. Be very careful not to tug this wire too much or too hard. You could still pull the solder point up and that would be a pain.

(8) -- Next we solder the other wire to the leg of Pin 15. Add a little solder to the leg first so that all you need to do is gently press the wire against the leg using your soldering iron to get them to melt together.

(9) -- Now we are at a stage where we can follow the rest of Damomonster's overclocking video BUT FIRST we need to know where to tap the +5v and the Ground from as these are going to be different to the ones in the video as that is a Model 1.

In the above photo you can see 3 capacitors. There are 2 to the side of the processor, 1 to the left and 1 to the right. These 2 are the ones we will use to get our +5v and Ground from. They are really close which keeps our wires short and very convenient.

Again Sega have made it easy for use because they have marked the + side of the capacitor so we know which side to get +5V from (the + side) and the none marked side is Ground.

Here is the second part of Damo's overclock video to follow :

The main thing to follow from this video is the Double Pole / Double Throw (DP/DT) switch set up and the LED wiring.

(10) -- Now you've followed his video you should end up with a switch looking like this : 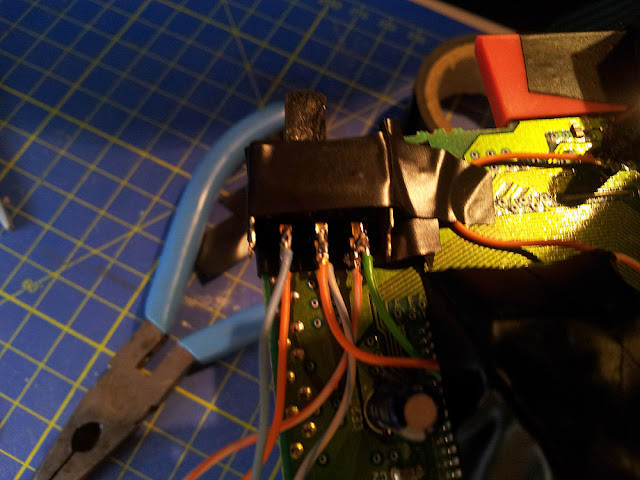 In this photo its the overclock wiring you can see on the top. Blue = 10Mhz, Orange = Pin 15 and Green = 7.6Mhz Stock speed. The row of pins below are Orange = Red LED colour, White / Blue = +5v from the Overclock package, White / Orange = Green LED colour.

(11) -- In the photos you can see that I've just electrical taped everything in place to test it out. You should now have something that looks like this : 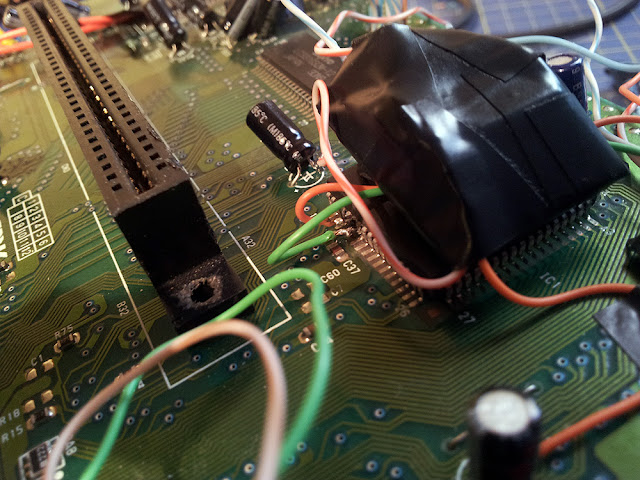 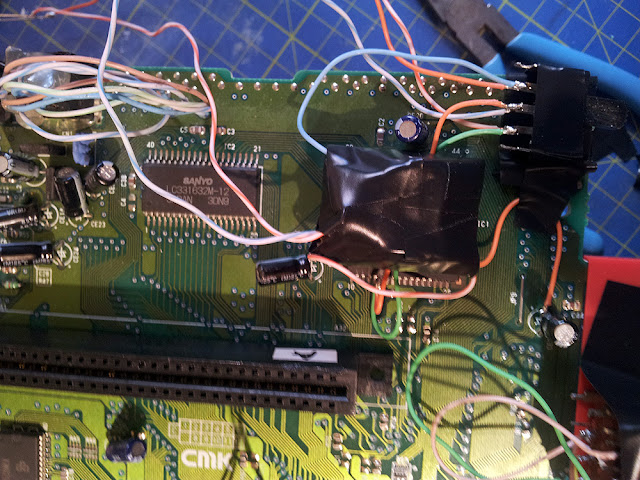 (Ignore the mass of wires on the left, that is from my A/V port retro-fit)

Now we can go and test that the overclock works. :-D

Below is a video of my Mega Drive 2 showing the overclock mod and it working on Sonic 2. It was tough to film as I used my phone and I couldn't mount the phone so you can see me playing Sonic 2 (which might be a good thing haha) and excuse the sniffing and coughing as I have a cold ;-)

(12) -- Now you've tested its worked you can squeeze some hot glue over the Pin 15 area. This will make sure that the wires will not get tugged and pull the leg off the processor or pull the soldering pad up. You do this stage once you've tested it as this is a perminant step. Also squeeze some hot glue onto the top of the processor and stick the overclock package on-top. this will stop it ever moving around. 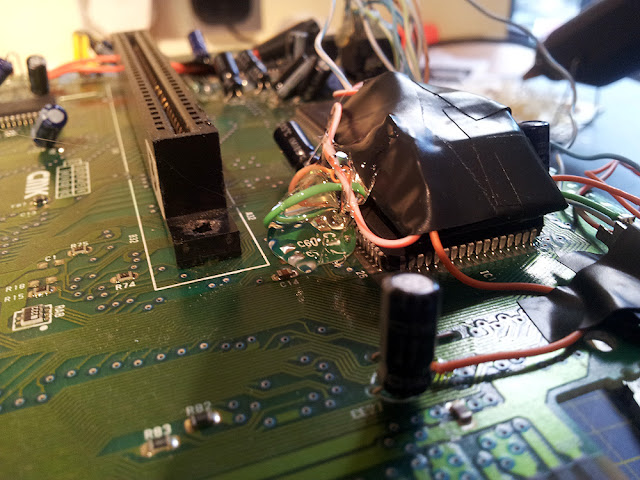 AND WE'RE DONE! :-D Your Sega Mega Drive 2 / Genesis 2 is now overclocked! You can enjoy Sonic 2 in all its none slow down glory as well as a whole host of games that push the stock clock speed a bit too much passed its limit of 7Mhz.


So there you go. I haven't been able to find any real guides on how to do this to a Mega Drive 2 especially one with photos and video of it working. So I decided to make one if this mod worked out, which it did, so I did. :-)

I hope you get it to work out if you give it a try. Just take your time lifting that leg up and you'll be fine. If you have any problems leave me a comment and I'll try to help you out.

Hey there! I read your tutorial and watched your vid. I've actually been working on my Model 1 Genesis/Megadrive mod for a while now. But I seem to have hit a problem. After 3 different mods on my console, I decided to test everthing.

The thing that has me stumped is my LED. I basically followed the instructions from TheDamoMonster's video but my LEDs will not light up. I have all the equipment and materials suggested. On my DPDT switch, I've soldered my respective wires leaving the middle for my +3v white wire, and on the LED I soldered the restpective colored wires from the switch to either side of the LED leaving the middle for the grnd from the overclock package. However, the LED does not light up.

It's a 3mm Water Clear Round Top Bi-Colour LED

If you feel that you need to use hot glue, then you are crappy at soldering and you shouldn't be allowed to do any kind of soldering!