GEEKING IT IN SPAAAACE!!

After watching Stargazing Live at the start of the month and receiving an awesome pair of Celestron SkyMaster 25x70 binoculars from my girlfriend for christmas I was itching to get my telescope out under a clear sky and get some viewing in.

Yes, as well as being into retro games consoles and games, painting and dancing Im also into astronomy in a big way. If your going to be geeky why not cover all bases hey?! :P

About 2 years ago I finally took the plunge and bought a telescope. I've always loved looking at the stars on a clear night and watched tv shows about space and the planets as a kid but I'd never looked through a telescope before. I was a little apprehensive about buying a telescope because 1) they are pretty expensive things! 2) they look awfully complicated, and 3) How do you know your going to be getting a good one?!

Well after talking it through with my girlfriend about really wanting to get one we put a side a night and went through some websites and read reviews of the entry level telescopes. I ended up setting my eyes on a Newtonian Reflector because it looked really cool! And it had more apature than a Refractor so I would hopefully see better views for my price range. With all that in mind I settled on a Celestron Astromaster 130 EQ. The reviews were generally good for an entry-level 'scope, the price was right and it looked really neat, triple win! I excitedly ordered it and couldn't wait for it to turn up.

The 'scope arrived and man was the box big! and flippin heavy!! A real pleasant surprise in a way as I've found most things I buy off the internet generally turn up being smaller than pictured. Not with this sucker though! :D

I couldn't wait to get it home and set up and thankfully it was a clear night! I got back to my girlfriend's parents farm and we hurridly got it all built and had a look through it at Jupiter to see what we could see. Well, with the 2 eyepieces that came supplied you could see Jupiter, the cloud banding on the surface and the four Galilean moons! It was awesome! And I was hooked!

If I remember right I spent the evening getting cold just looking around the sky at random things. I had no clue what to look for, what was interesting etc. I just had a great time panning around.

After a week of poking about with the scope I joined a forum (the stargazers lounge) which is a brilliant source of information and got looking for more lenses so I could eek out more detail from Jupiter and the Moon.

My girlfriend got me a Planesphere which is invaluble for learning the night sky and I was away.

I spent the next two years on clear nights with the trusty Astromaster searching out galaxies, star clusters, globular clusters, planets and exploring the surface of the moon.

One of the coolest things I remember from the cold nights was first seeing the rings of Saturn! We were out in the garden around 2pm and I was sure I'd spotted a planet in the sky. It was bright and didn't twinkle. So I panned the scope round and had a look. It looked like a bright star with some glaring out of the sides of it. Excitedly using higher and higher magnifications the rings of Saturn came into view. :D Man I did a little dance and Im not ashamed to say it! It was like I was the first to ever see it haha. Amazing!

With my interest in astronomy growing and growing I started searching out distance learning courses which would let me use my telescope and settled on joining Liverpool John Moore's University's "The Universe through a Small Telescope" course. Through the following 6 months I had new tasks and targets for my 'scope every month and lapped up the information.

Being super happy with my results for my course I decided I could treat myself by getting a larger telescope. Upgrading from the 5" Newtonian Reflector to an 8" Newt'. The detail my new Skywatcher 200p bought out in every object I'd previously observed was amazing and I was really pleased with the upgrade. Oh, and its a flippin' BEAST!! :P 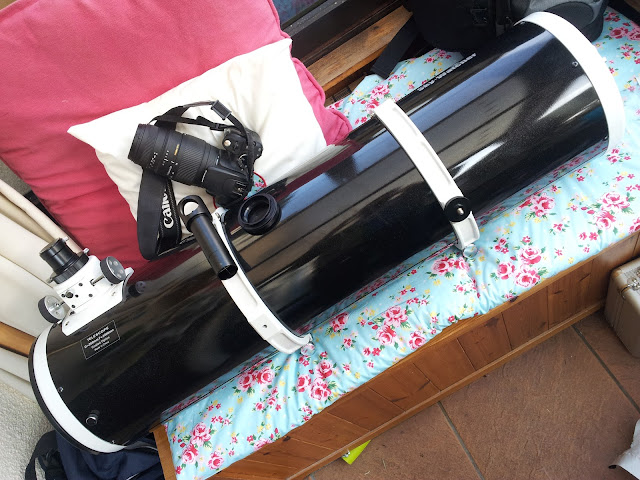 Here you can see our DSLR for scale next to the optical tube. One of the ace things about my new scope is that its got a direct DSLR adapter on the focuser which means that you can mount the camera to the eyepiece area and take astrophotos easier. 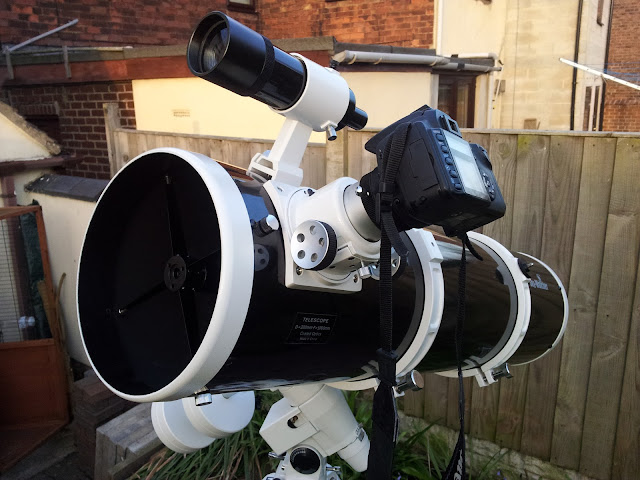 Now I know how to set up a telescope and find things in the sky pretty easily but cameras....thats a new kind of voodoo for me. The settings are rather baffling! haha but its fun to see what I can get from the 'scope in the back garden of the village I live in.

These are the best shots I have so far from it. Last week on the drive home from work I noticed a thinnish crescent moon in a very clear sky and had to try to get some photos of it.

My best moon shot to date and I'm really happy with it. The focus could be a lot better I think. The Seeing wasn't the best so the focus was wibbling around a lot but from getting this photo Im going to be trying to get more and better photos with my setup.

Also I thought I would try my luck with getting some images of Jupiter for the heck of it. It looked really small in the eyepiece as the camera doesn't do any zooming, it just uses the telescope as a large fixed focus lense. I snapped away anyway and was so surprised when I zoomed in on the photos on my laptop! I only flippin well got the cloud bands showing up!

Im really really happy with this image as its a single shot rather than a stacked webcam video and my telescope doesn't have a motor.

To learn more about cameras and night time photography I've gotten an intervalometer / timer realise for the DSLR and I'm going to attempt some timelapse milky way photos. The videos I've seen have been so inspiring! I'm going to be doing some experiments and at some point if they work post them up.  And now I have some astronomy specific binoculors I'll get some viewing in while the camera does its work. :D

In conclusion for this really rambling post is, if you like looking at the night sky when your walking from place to place get yourself a telescope. Even if its just a £120 entry-level one, you will absolutely love it! And I couldn't recommend the Astromaster 130EQ enough as a starter telescope as I loved it to bits and saw some amazing sights.