It's been a little while since I posted last about a geeky project. Basically I've been caught up over the last few months with house / garden improvements as well as doing an RGB mod to the PC Engine I purchased from ebay a while ago. I was having a really hard time for some reason with getting the mod to work and finally got it figured out. Basically the best tip I can give is draw down the wiring locations your going to use and you do use on a piece of paper as you go. I didn't and kept mixing my wiring up like a dope.

Anyway, I've been of on whats commonly called a "Stay-cation" this last week and chose to use some of my holiday at home to finish up some retro projects I had on the go as well as play some games etc. The main project I wanted to finish was the Jamma-drive 2, which is what I did.

With the controls being finished in Part Three all I needed to do was possibly overclock the processor to a switchable 10mhz and finish off the casing. Tidy it up and paint it, then using printable water-slip decal paper make a decal for the casing.

After having a good play on the Jamma-drive2 I decided I was going to have a go at overclocking the processor, shouldn't take too long seen's I've done it before. I set about making my crystal circuit and then started the process of heating pin 15 and with the pick tool, slowly pull the leg out from underneath the processor. The legs on the processors for the megadrive 2 are curled underneath it to slightly raise it from the pcb, I guess for giving it some cooling. Anyway, I dont think I had the soldering iron hot enough and pulled the solder pad up with the leg of the processor!!! The scariest possibility happened!! Man I was cross with myself. This is the reason that not main people overclock the model 2's, its way easier to just cut the leg of the model 1 and work on that rather than threading the needle of the model 2. So, with the solder pad now pulled from the board and stuck to the leg what do I do? I try to take clean the leg up and get the solder pad off it and the leg has taken too much wiggling and snapped off! PERFECT!! >:-( Screwed processor city!

I put everything away and took the pup out for a walk to try to get away from the ruin I'd just created, I'd spent all this time making a Jamma-drive and then balls-ed it up overclocking it! Gah!

After an hour we got home and I started trying to see if I could fix it. Out came the pick tool again and I scratched away some of the plastic around the broken leg to expose some of the broken leg and got a little wire soldered onto it. From a video that has been taken off youtube I remembered something about a guy soldering to a point on the board next to a printed 10. So with a "what the hell!" mentality I soldered the wire into the "10" location and went to see if it would work. And what do you know? I blumin' fixed it! :-D 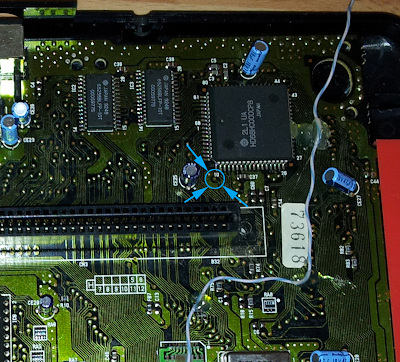 So lesson learned, don't get cocky when trying to lift leg 15 when overclocking and if you do end up snapping the leg off or pulling the solder pad from the board, you can wire to location 10 that is just below the processor. This has fixed the megadrive and its clocked as standard 7mhz. I think I'll probably attempt to overclock it now I know its working but I think It's going to stay at 7mhz so I can play it for a while :-)

Now that the thing actually works again (Phew!!) I set about finishing the rest of the project.

I stripped the Jamma-drive 2 out of the case and started finishing up the new expansion port. Sanding it and trying to get it as flat and blended as I could. 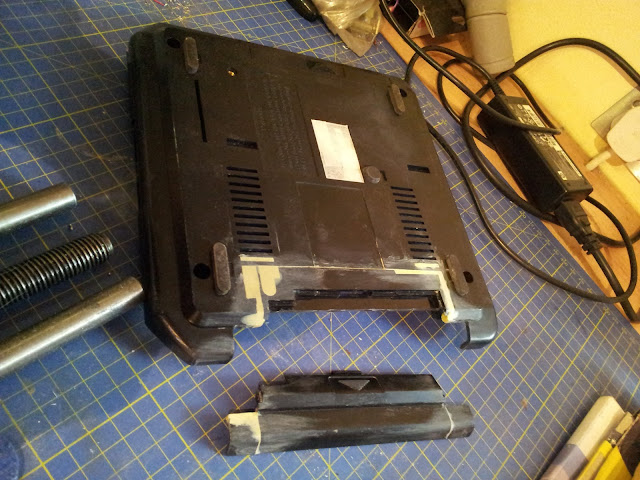 Here you can see the milliput holding the expansion port to the case and hopefully see it smoothed into the original case so that once painted it should look pretty stock.

Next step is to masking tape the little spongey feet of the case so that they don't get caked in paint as well as the sticker telling you what serial number etc your megadrive is. Then it's off to the painting stage. 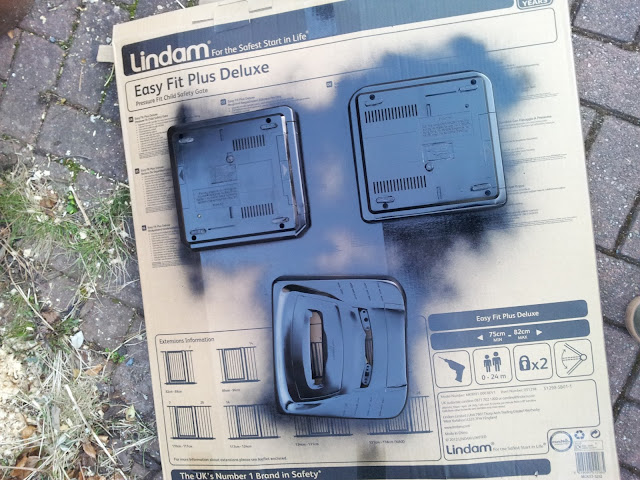 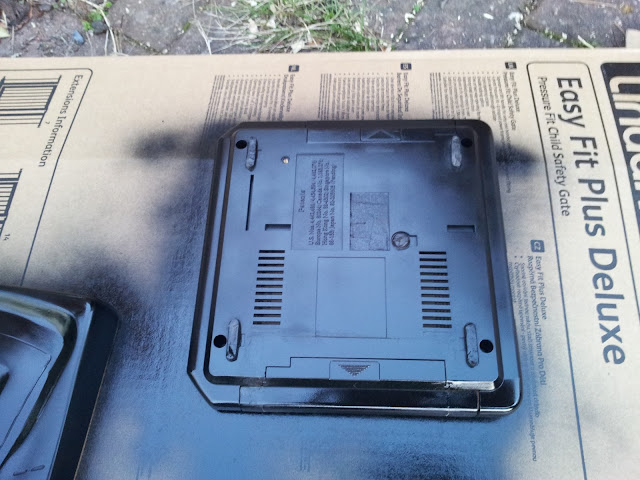 I gave the case a quick coating of grey primer over the new expansion port area and then painted the whole of it with Halfords Matt Black car paint. I've found that it gives a finish that is very close to the way the plastic looks on the original Megadrive's. So once its dried it will get a coating of a Matt Varnish so that it keeps its plasticy look rather than being all glossy. In the photos it looks glossy but that is because its still drying. You might also have spotted the Neptune case having another coating of paint. I did a bit more work on it on my holiday but that is for another post ;-)

So, The case has been painted and now is dry. So, what does it look like?! 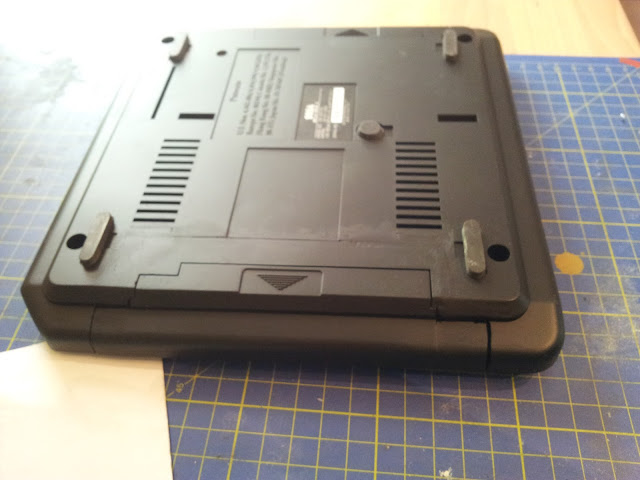 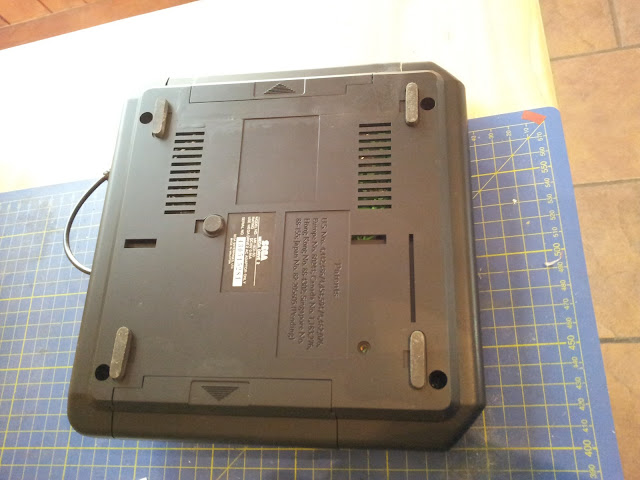 Pretty good to me, I know it could be a little smoother but to be honest this project has been taking too long, so it gets a tick from me. And in certain lights, as you'll see in the video, you can't really see the join. :-) Overall Im really please with the look of the expansion port. Especially with how sturdy it is, It has no wobble or flimsy-ness to it. 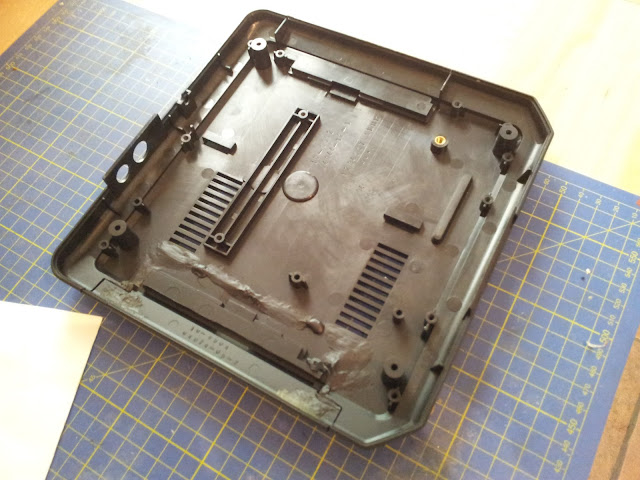 And here is how the hot glue and milliput is covered inside the case. you can see the kind of "welding" I did with it to fix the new expansion port in place. And its solid, doesn't feel at all like it will crack or break.

Time to put it all back together again and get the switches set into place. 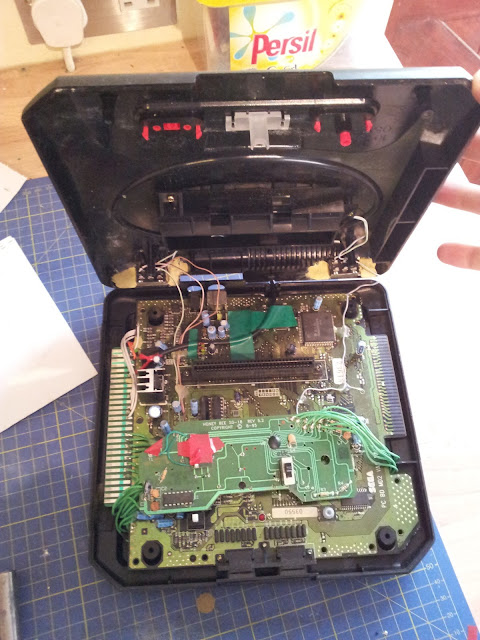 And here's how the case and new side expansion looks with everything all built back inside the casing. 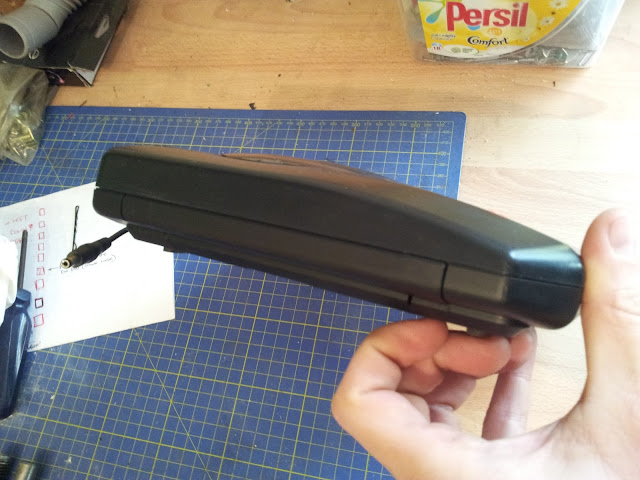 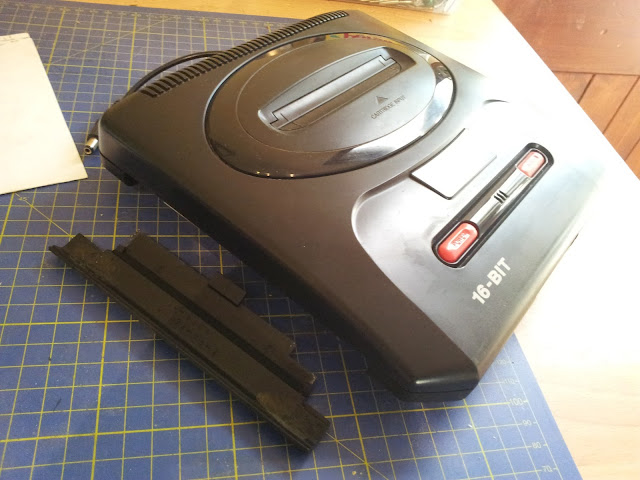 Looks pretty sweet I think !!! :-D Im very happy with how it's fitted together, and when its sitting on the table you wouldn't even think there was anything going on underneath the case. A real Street-Sleeper :-D

So, for the finishing touch to this little project. I want it to look stock but I also want it to still show a little hint as to what it is. To achieve this I bought some water-slip decal paper from the internet so that I can make my own "Jamma-drive 2" logo to replace the megadrive 2 logo thats already on the case. To start I measured up the height of the existing logo and got onto illustrator, and with a Sega typeface I layed up my logo. Logo all made to size and its onto the printer to get the water-slip decal printed out. Once its printed you have to spray some Matt Varnish onto the decal to make it waterproof and then onto dunking it in warm water. 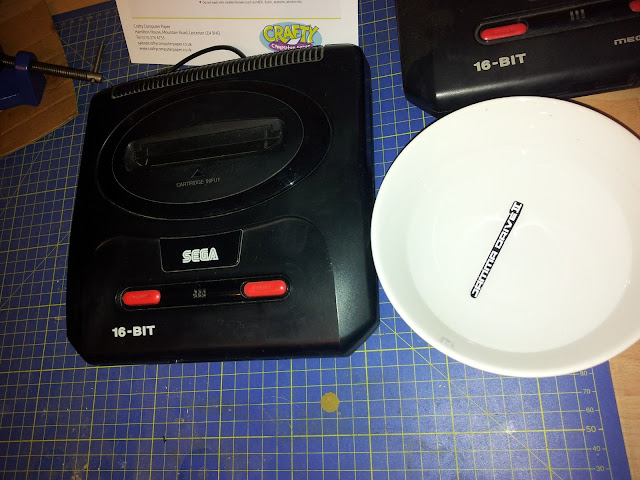 And with a little bit of wiggling here is what the finished decal looks like on the case with a megadrive 2 underneath for comparison. :-) 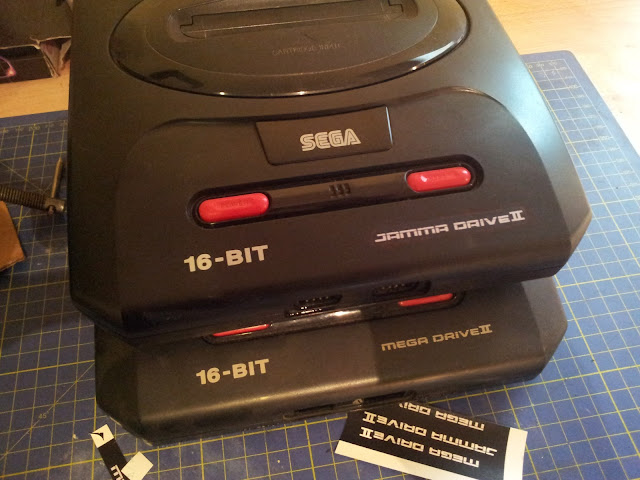 Im super happy with how the whole project turned out. I don't think the case could have come out any better, the waterslip decal really puts the cherry on the cake as it would make you look over the jamma-drive and think its standard but make you do a double take and go "what!?!"

Here is the second part which show's the Jamma-drive 2 playing some games. :-D

Man I'm happy this project is finished now as it was meant to be a nice quick and easy one, but with the RGB problem and then having to figure out the controller pads it dragged on a bit. But the finished 'drive has come out great I think.

Catch you all later guys

Hello !
I have a question for replace the megadrive 2 logo ?
how to replace this ?
Do you have a picture for the logo "mega drive 2" and a picture for "16-bit" ?
Sorry for my english, i'm french and my english is not good !