I hope you've all had a great chistmas and new year holiday.

Rightio I've just about finished my Jamma-megadrive 2 and thought I'd post up the next part of my build. This post is about the trickiest part of the build, hacking up the pad and getting it all wired up to work with the Jamma fingerboard and through that, your arcade stick.

I found that when I tried doing google searches about the pad-hacks all I could find were guides / pin-outs for the Megadrive 1 joypad. I wanted to use some Megadrive 2 pads as I had a few of those and with them being newer pads they should last longer. Should be easy enough to match up the guides with the MD2 pads, they can't be that different right?....wrong!!! They seem to have changed the PCB layouts and possibly manufacturers through the years. With the wiring switched around and not very well marked out.

Undetered I opened up one of the spare MD2 pads and got desoldering the cable from it so that I was left with just the pcb. Then comparing up the pinouts hopefully got the solder points matched and started soldering wire after wire to the megadrive pad, the fingerboard and to the joypad solder points on the Megadrive 2 pcb.

Rush off to test and hey, the controls work in a fashion! ... up is left, left is down, start works and only B does anything. Bugger! That didn't work then.

I decided to dig out my MD1 pads and check out the pcb's inside them and see if they match up with the pin-outs from google. Well, only 1 of them did. I guess that during the MD1's life they changed the pads manufacturer and/or design.

With the pad that matched up I desoldered and re-wired the pad to the Megadrives joypad solder pads and to the fingerboard points marked out on my Supergun wiring guide. 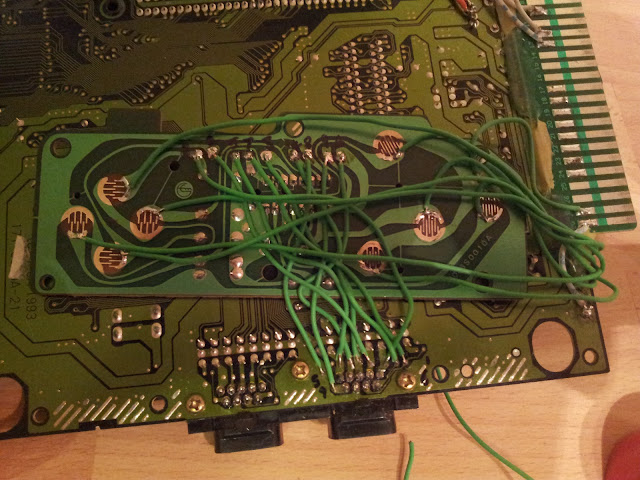 I was really hoping that I would do the wiring a lot neater than it is in the photo. The wiring is like a rats nest because of me having problems with the original pad. As you can see I wrote wiring numbers
onto the pad so that I could easily match up the points to the solder pads on the joypad connector. You can see that I've wired from the non-ground side of the button area to the jamma edge connector. This sends the signal from your arcade joystick through the game pad which then gets transmitted to the Megadrive which then tells the games what the hecks going on :-P. To get the ground from the pad to the Jamma fingerboard you scrap away some of the green colouring to get the bare copper and solder a wire from there to a ground on the finger board. 9 wires from the fingerboard to the pad and 9 wires from the pad to the Megadrive 2.

Bingo! This pad worked straight away! Up, down, left, right all work! A,B,C, Start all work too! :-D

Onto the next pad... 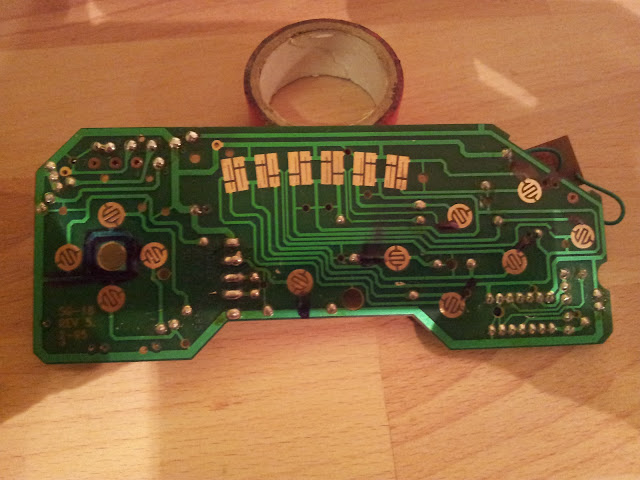 I couldn't find another pad in my collection that matched the working MD1 pad so I checked my non-sega 6-button pads and found this one which had auto fire and slow-mo. I wouldn't be needed those as I wouldn't really be able to set them up easily enough on my arcade joystick. So I just soldered it as a normal sega 3-button pad. Thankfully the top left wiring points were numbered which made it easy to match up again. 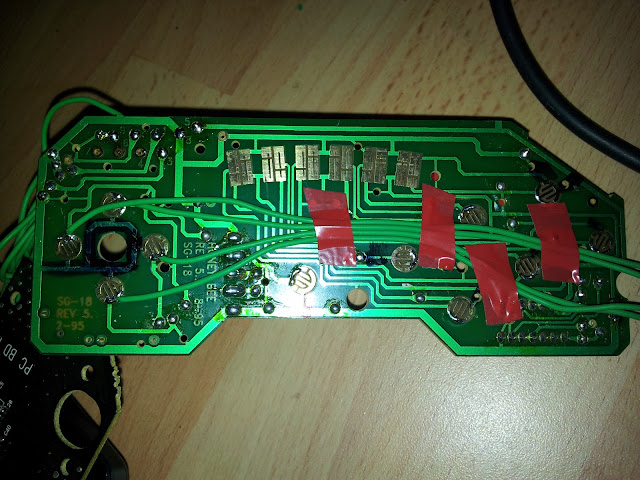 And this time I routed the wiring a lot neater :-P I wish I'd done it this way with the first pad but as it works and its for me I will keep it as is for now. Again you can see the wires soldered to the input side of the button area rather than the common ground side. These are soldered to the fingerboard.

And here is the underside of the Megadrive 2 joypad socket area. 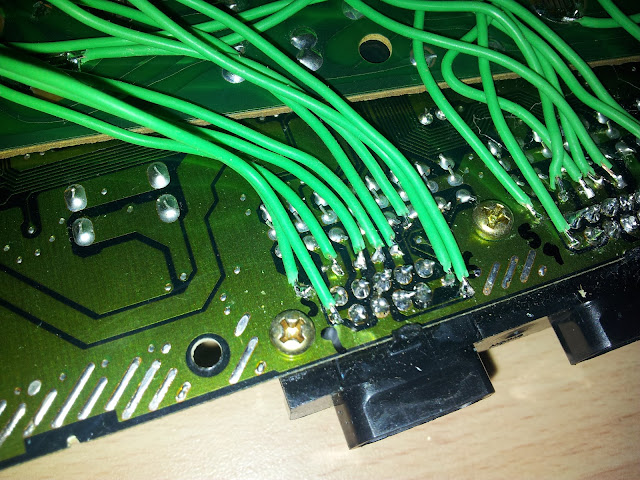 Again you can see that its routed a lot neater. Also, I found that if you soldered directly to the pins for the connector then the arcade stick completely took over the controls and you couldn't plug a standard MD pad in the port anymore and get it to work. So, to keep it so the Megadrive2 could still be used with pads you have to solder to the little solder points along the traces rather than the pins.

Bingo bango 2 working pads, and with a little wiggling the Megadrive 2 still sits in the case. Player 1's pad is underneath the main board sitting inbetween the mounting points and Player 2's pad sits on top of the Megadrive2.

Unfortunetly I didn't get a photo of the final joypad layout. I'll update the post when I get onto overclocking the Jamma-drive 2.

Which is the next step. Overclocking and finishing off the case mod. It needs a little bit more milliput to smooth the joins and then giving it a blast with some matt black spray paint.