Not too long a go I finally managed to get Winuae working on my PC laptop and started reliving my last few years at school with my ever faithful Amiga 500. Well, reliving it with just the games and not all the school work! haha.

I must admit that its a bit awkward to get the emulator up and running but after an afternoon I was happily playing some Dizzy - Prince of the Yolkfolk, Chaos Engine, Syndicate and Alien Breed. But, something was missing.... The games run as they did even if its in a small window because of the lower resolution of the old machine compared to my laptop screen, they even take as long to load. The thing that really knocked the experience on the head though was the lack of clicky competition pro joystick. The soft feel keyboard on my laptop just wasn't the same and neither was using my xbox 360 pad.

I did a bit of research on the internet and saw that you can get a USB to amiga adapter but they were surprisingly expensive and for me I'd much prefer to have a go myself and make something rather than drop a lot of cash on a pre-made thing. I found that some smart peep's had pad hacked a cheap usb gamepad and made an adapter for theirs in various guises, had a quick look at their descriptions and decided to make my own.

I got my hands on a cheap SNES replica usb game pad from amazon and a project box that should fit the PCB in nicely along with a spare megadrive 2 pad socket left over from a broken megadrive. 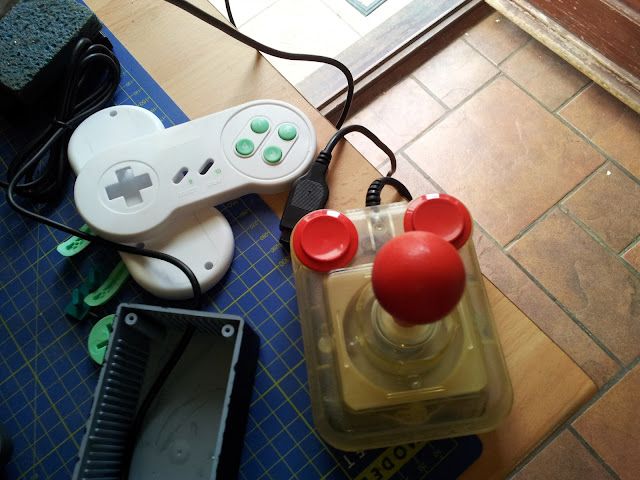 With all the parts collected together I set about wiring up the d-sub 9 socket from the megadrive 2 to the PCB of the usb SNES pad using a pinout for the Amiga joystick so I knew what wire went where. This should be a really nice and quick little project as its essentially doing a little wiring and bingo your done. Well, I ran into a hurdle and one that I couldn't seem to get over. The SNES pad has 2 sets of grounds. One common ground that runs around the pad which hits all the pad buttons which is awesome, this is exactly what you want. Except this pad had a weird ground that ran through left and right and up and down seperately. They have what I found to be called a "secret ground" which I couldn't find on the pad. This resulted in the fire button working fine on the joystick but you could only move left and down. You pressed right, you went left and up made you go down. That just wasn't working out at all.

So just a heads up, do not buy the cheap SNES usb pad from Amazon if you want to pad hack it for this kind of thing. It works great for the SNES emulators but not the hacking. I must admit I was a little disappointed but every pad is designed differently.

The next day we had to nip to Curry's to pick up a memory card for my girlfriends mom so I nosed through their usb gamepads and came across the Saitek p380 going cheap and thought I'd take a punt on that in a hope it would have a common ground to it. My quick searches before we went said that at least 2 different models of Saitek had common ground so I had my fingers crossed. Its a dual shock pad which is complete overkill button and d-pad wise but thankfully when I cracked it open it had common ground on all buttons!!

5 minutes later and I have a working joystick adapter. Thing to remember, get a pad with common ground on all buttons and you are laughing!! :-D 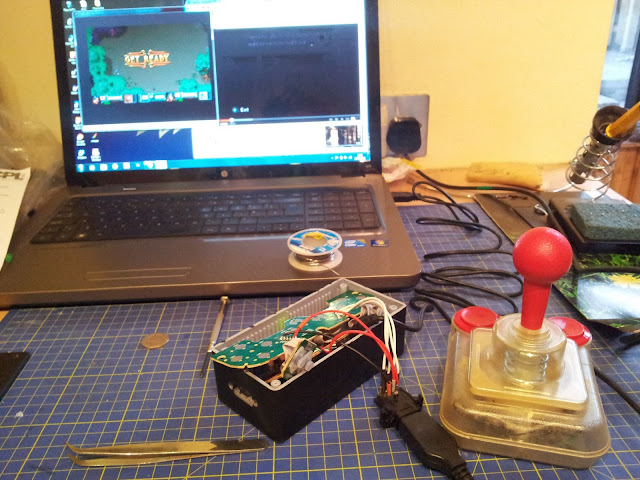 A thing to note as well is that I soldered directly to where the ribbon connectors join the button board to the smaller board that does all the clever bits. I would normally have soldered to each input side of the buttons on the PCB but thought I would try it this way and was pleasently surprised that it works great like this and its a lot less fiddly compared to tinning the small pads of the PCB.

As you can see from the above photo I have the joystick adapter up and running on Winuae on my laptop but the pad PCB wont fit into the project case! Doh! I'd measured it up for the other pad which only just fit in but the Saitek is about a centimeter wider so some cutting was going to be needed. I've not cut a pad PCB before so I wasn't sure if it would work or not so I tested it by cutting the PCB down on the right hand side (button side) as I only need button 1 for the joystick to use.

I scored the PCB with my stanley knife and a metal ruler all the way round and snapped it as cleanly as I could with my pliers and Bingo! The Pad still works! It seems that if you wire to the ribbon cable solder points you  can cut the pad down nicely. 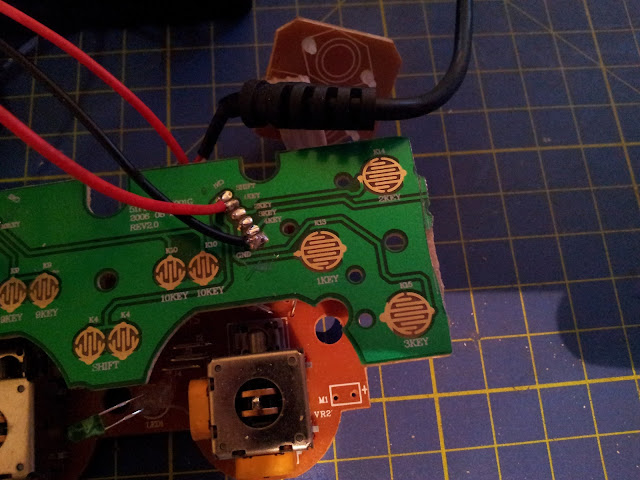 The PCB still wouldn't fit in the case so I did the same on the left hand D-button side of the PCB and again checked it still worked.

Now it was fitting inside the project box nicely I had to desolder the usb wire from the pad so I could feed the wire through the hole I'd drilled into the box. This pad has a nice moulded bit on the wire which butts up to the bottom of the pad which I wanted to keep to add a bit of a manufactured look to the adapter. The only way I could keep this though was to extend the four usb wires so there would be enough slack inside the case to move the moulded piece far enough out that it could be attached to the case. With it wired up I hot glued the usb wire to the inside of the hole while pushing the moulded piece up to the side of the box so it would fit flush.

The next step for me was wanting to keep the LED thats on the pad usable. I wanted it to be on the project box so that when you plugged it into the usb port it turned on and you knew it was all up and running. The LED on the pad is quite short so I snipped the LED off the pad, wired up some extensions to it and hot glued it into the box. 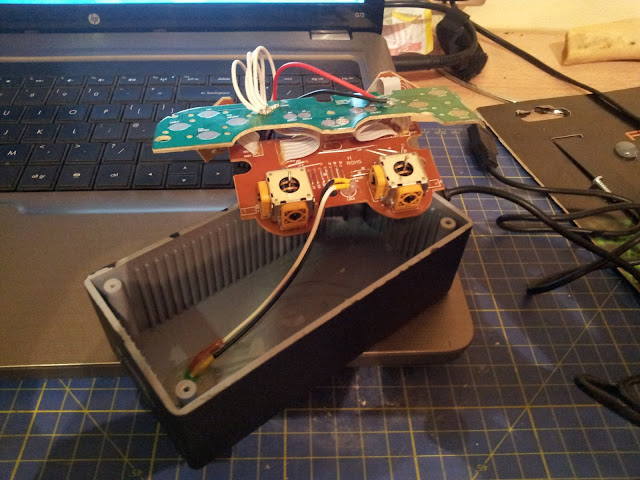 Finished! All the wiring and extensions are done so its time to squeeze the pad and wiring back into the case and make sure it all shuts nicely. Its pretty snug in there but there isn't much wasted space and the pad shouldn't move about much at all inside the case. 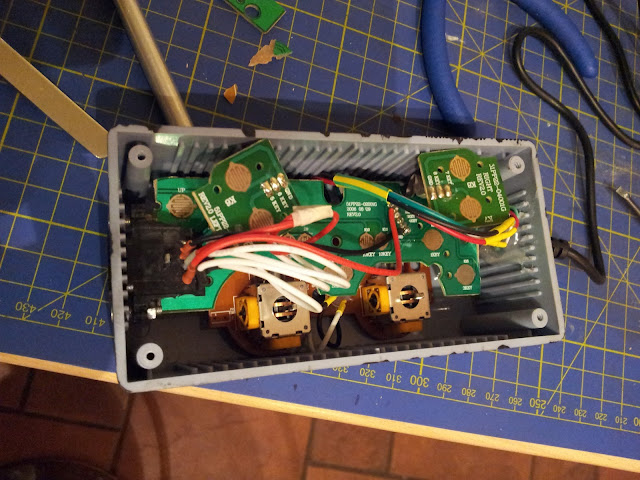 Looking inside the case it looks quite complicated but its really not. Its quite straight forward really and I just made it a little extra work by extending the wiring to get it to look how I wanted it to look. If you wanted to do it really quickly you would really only need to desolder 4 wires (the usb cable) and solder up 6 wires from the pad to the joystick socket and your done. :-)

So here are a few photos of the finished unit all hooked up and being used. 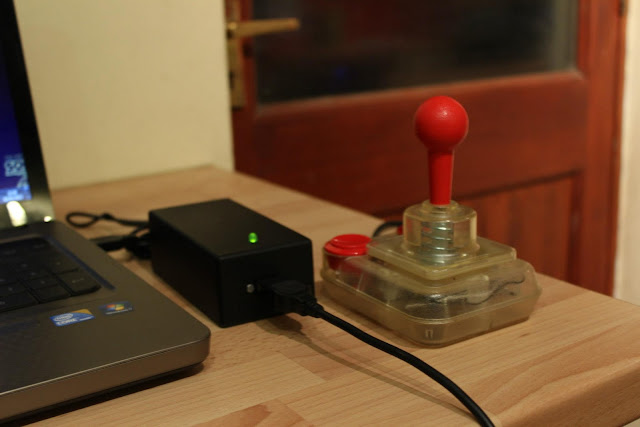 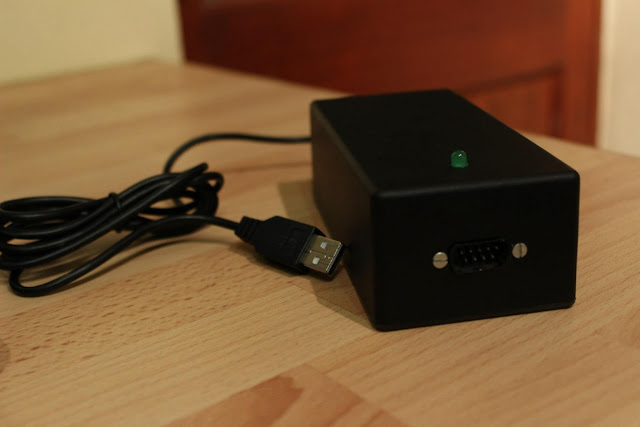 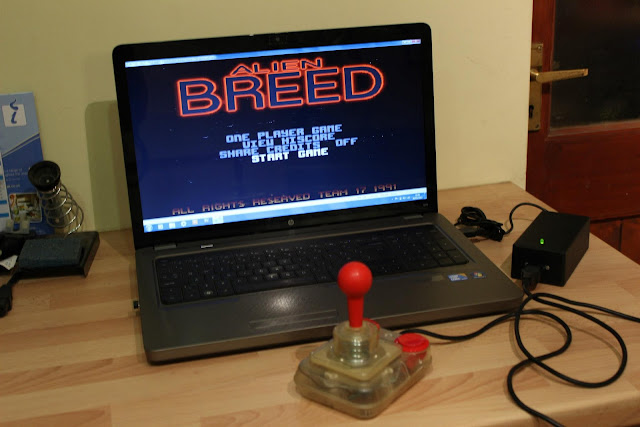 It's turned out really great I think and looks the bees knees with the green LED on the top. Also it's accomplished its mission and playing Winuae with the competition pro or zip stick I have really makes the games feel 100% more authentic! Im really hyped up now to play more Winuae on my laptop now and get some of the games I used to love on my old Amiga 500.

So if your up for the little bit of work and want to use your original joysticks on the PC then give this a go. It is a nice quick project and very satisfying to be able to play these old games using the old hardware via something you've made up yourself. :-)