Yes!! After looking longingly and lovingly at pictures of the awesome and mysterious little white PC Engine in Computer & Video Games, Mean Machines and Game Master magazine as a kid I finally own one! And I tell you what, its a thing of beauty! Sounds stupid to say but it really is! It's well known for being the smallest games console in the world (well, it was) and it really is tiny, and pretty much perfectly formed. Its footprint is the same as a CD case. If you have one to hand check it out then imagine that case being about an inch thick and you have the size of it. TINY!!

I've always wanted to have an original white PC Engine. To be honest I'd love to have a grey Core but the white has always been embedded in my memory as the one to have from being a kid. When I check ebay I more often than not check out PC Engines but have always been put off with the prices but one day I spotted this little fella on there listed as faulty and feeling confident I could fix it I bid and got it at a steal! £12!!! TWELVE POUNDS!

It was listed as faulty and I was really really hoping that it was just down to the owner not knowing that Japanese RF doesn't work properly on UK tv's. If it shows a signal it'll be really crap and wibbly etc. And I was planning on doing the RGB mod on it to get it to run through scart anyway so that wasn't going to be a problem.

The day came and the little fella turned up and jeez was I impressed with it! Its pretty much perfectly formed and covered in little details. I love the indented call-outs for whats-what on the case. Detail you don't see at all really on other consoles, if things are named they are printed on not moulded. 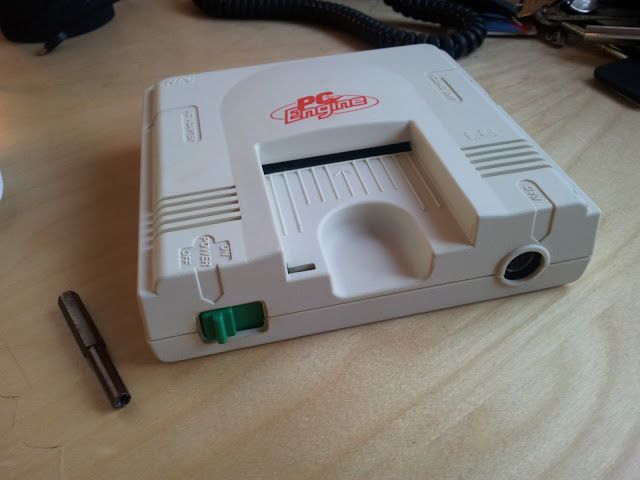 The case hasn't yellowed at all and is in great condition. The only problem....I have no game to check that it works! I was really hoping that the machine would at least tune a single coloured screen onto the tv but that wasn't to be. I'd need a game and a pad anyway as I got it as just the console so I got back on the 'bay and routed out a game that should be good fun to test it out.

A quick bid and win on a nice looking white pad and a game and we're away! I don't think you could go very wrong with getting a Capcom game to test a console out with, especially when its a Street Fighter 2 game and its got all the bits and bobs that go with it, check out all the cool stuff that comes with the PC Engine version of Street Fighter 2' Champion Edition. :-D 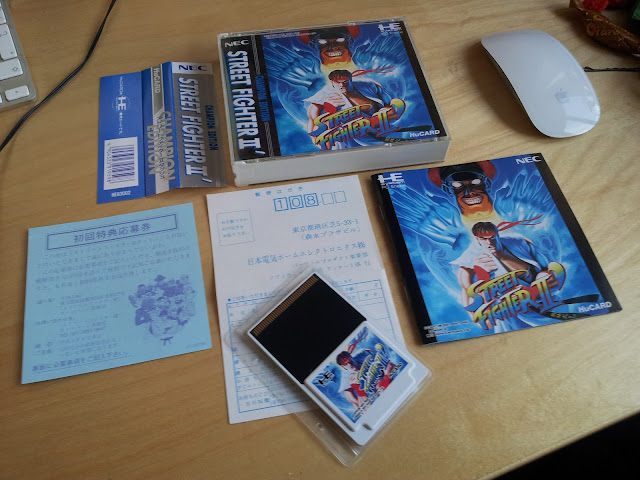 If you don't know much about the PC Engine's then you may be wondering where the game is in that photo, well its a card based system, much like the original Sega master system (although the MS uses cartridges as well). It's quite weird when your used to cartridge games but it adds to the charm of the machine and makes it all that little bit different to a megadrive or snes.

So, now I have everything to test the console out I excitedly plugged it all in with an rf cable borrowed from my Snes and finally managed to tune in an image. It works! No repairing needed! :-D The image is crap! But it shows the console works and is going to be a viable candiate for a nice rgb mod. 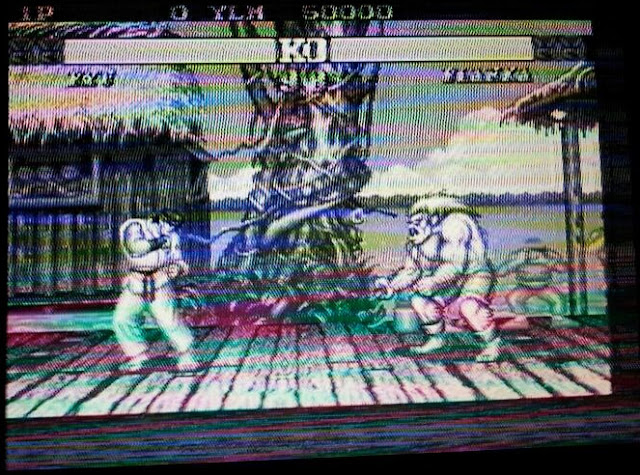 I'll again be following the brilliant guide on Mmmonkey's website so you can follow his guide there on how to do the mod, I'll just post up the photos of my progress and note down anything I encountered when doing my mod.

The guide to follow can be found here : MMMONKEY PC ENGINE RGB MOD

First things first I opened up the case and had a good nose around the insides and located the offending RF unit that's to be removed. 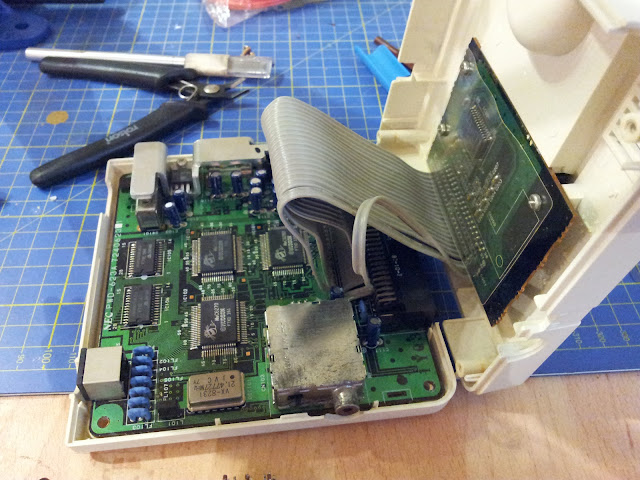 There he is, the mottled aged looking unit. He needs to be desoldered and a little area next to the hole for the connector needs scratching back to bare metal for soldering too. 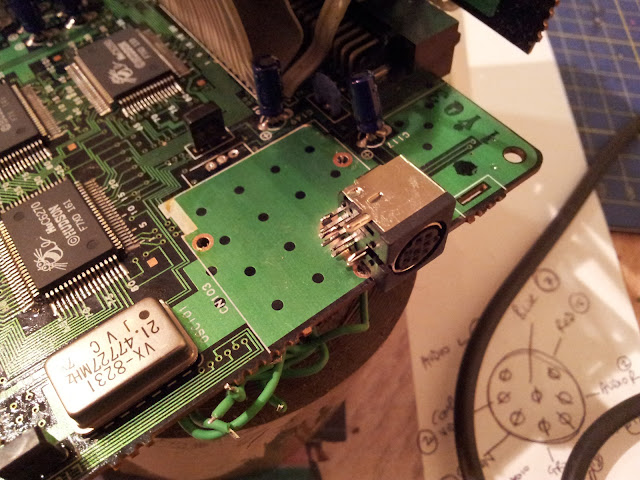 Mmmonkey has a really nice and clean way of doing his mods and I tried to follow the way he mounted the Din socket as close as I could. Once soldered on the unit is solid and I don't think It will get wiggled loose from a lot of use as it might do if glue gunned on there. I highly recommend getting your hands on a fibreglass pencil from ebay (other online vendors are available haha) as it takes a little while but you will get a really nice and clean metal area to work on from using one. I would have hated to just scratch the green areas away with the scalpel.

So once your little socket is in place you start soldering and routing the wiring from the card reader area (underside of PCB) to your socket. Again following the guide from mmmonkey you shouldn't go wrong. I would recommend writing / doodling it down on a piece of paper though so it gets in to your head, well this is how I do it otherwise I make daft mistakes and loose the orientation of the socket / pins.

You want to keep the wiring as flat to the bottom of the board as you can so that it will sit level again in the case. 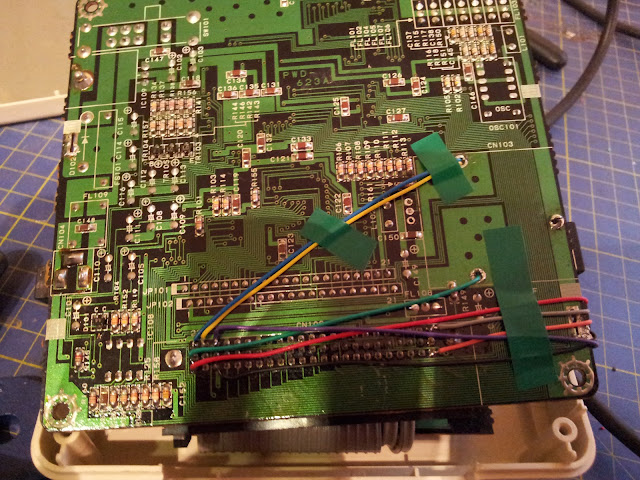 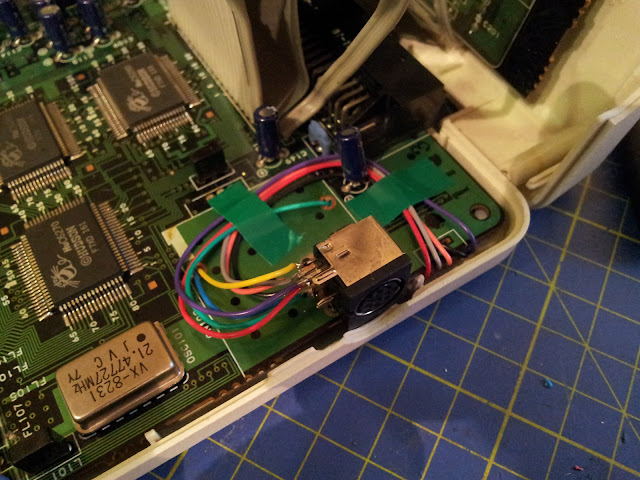 In the above photos you can see that I've used electrical tape to help support the wiring along the length of the pcb. This should help to keep the wiring nice and tight against the board as well as hopefully stop and tugging on the wires which could pull them away from the solder points. I used some green electrical tape in an attempt to make it blend in a little :-P also, I would normally recommend using a glue gun to keep the wires in place but I think the spacing under the board is a little tight so tape is a lot lower profile. 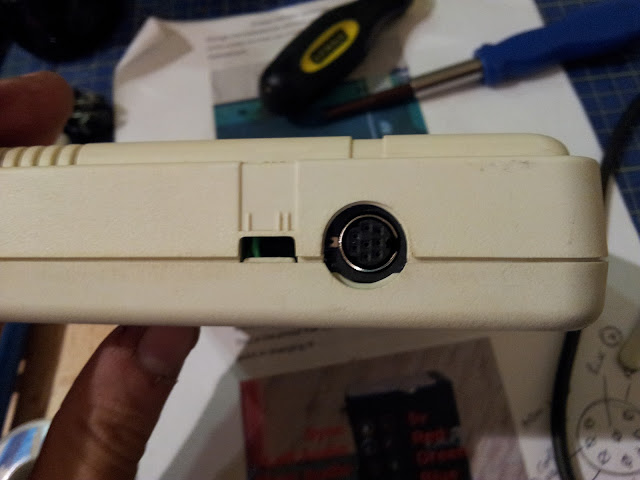 I don't have any photos of the cable being made but again, I just followed the mmmonkey guide. As long as you keep the orientation of the pins the right way round you wont go wrong. Unlike me who while being tired didn't notice I'd turned the plug slightly and couldn't see where I'd gone wrong. So make sure you have the notch on the pin holder the right way round and you'll be sorted.

Here is the finished PC Engine with the scart lead. A fully working Japanese PC Engine...finally I own one!!! :D 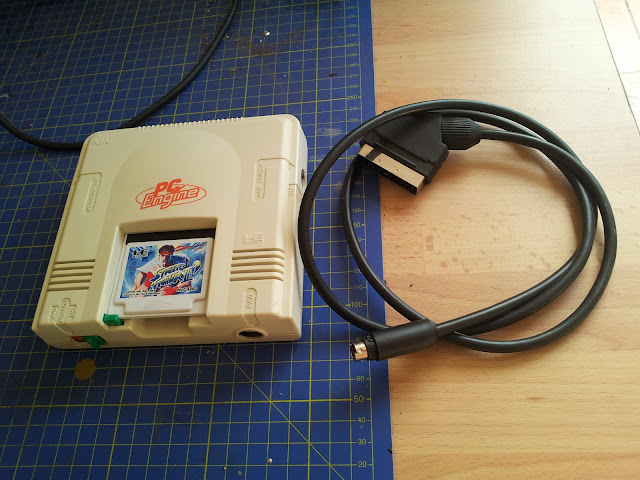 And it looks 'proper' not like the ones I've seen where they just have the scart lead perminantly coming out the side of the case.

Here is how it looks now on my TV, perfect :D some scan lines would be nice but for being on a modern telly I think it looks great! 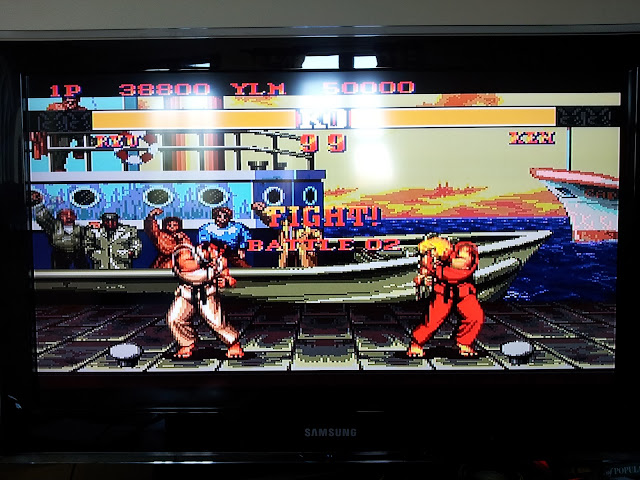 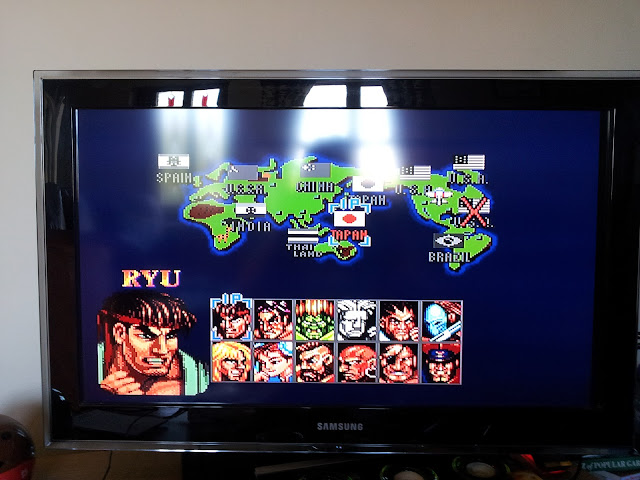 So I guess in closing. If your after an original white japanese PC Engine but are unsure if it will work over here I'd say get one and do this rgb mod to it. But thats if your confident with a soldering iron and aren't to worried about getting in the case and wiring to the pcb. If your not that confident I would say go for one of the grey Core grafx pc engines which look awesome as well but also have the rgb output (I think).

They are awesome little machines with some amazing games on them as well as looking the bee's knee's in the casing department!

Thanks to Mmmonkey for his awesome website and guides and I can't recommend his website enough! :D


Posted by Porlzilla at 10:47 am
Email ThisBlogThis!Share to TwitterShare to FacebookShare to Pinterest
Labels: console mods, DIY, pc engine, soldering