Sorry there's been a bit of a delay between posts on here. I've been meaning to make a post on the new Jamma Supergun I made last month but I've gotten caught up playing it haha, going to Revival and since then trying to get the nerve up to start trying to repair the Street Fighter 2 Champion Edition bootleg I got from there.

Basically I've had crap luck with bootleg boards so far and I now see why peeps in the forum I frequent steer clear of them really. The two I've had now have had weird problems where all the proper original games I have had no problems at all. Oh well.

I was really excited to get this game back from Revival and then during the next week spend an evening playing it to death with my mate Glynn. See if I could win a few matches against his 4/5 hit dragon punch combo's :-P

Well I get home and had about half an hour to check it before going out again. So I ran upstairs and excitedly hooked my Supergun up and fired the sucker up. Well, it runs but man is it dissappointing! The graphics are all glitched out!! Ryu's sprite is flickering around constantly on the screen and the KO sign keeps moving about. It run's but it looks poop!

I decided to make a video of it the next day and put it on Youtube and the forum I go on to see if anyone on there could point me in the right direction to diagnose the problem.

Here's the vid of the board in action.


Two comments I got on the video were to check the voltage on my internal power supply. I had the +5v set to run my CPS2 boards which is a little higher than normal, I think +5.2v. So I got my mini screwdriver out and started to slowly crank the +5v to see what happens.

Well when you get the voltage nearly up to +6v the sprite glitchiness starts to go, well Ryu's sprite goes anyway. That's good to know that it will get rid of the sprite glitch kind of but I really shouldn't have to crank the voltage up to that high. And it still hasn't fixed the problem really.

The next problem I noticed was on certain stages the screen seems to bounce about, like its losing sync. Its not rolling, just moving about up and down and slightly left and right. But if you go all the way over to the left on some of the 'bouncing' levels it stops moving and plays as it should. Very weird!!

I've started trying to play through the game and through the bouncing to see which stages are fine, some are, and which bounce. Its got me wondering if its one of the Mask Roms which holds the game information is slightly 'bad' or something. Maybe one of the Mask Roms holds 7 stages and another Rom holds the other 7? Or it could be bad Ram that the rom's pump the stage information into? Like one or two Ram chips hold 7 of the stages and one or two other roms hold the other 7? Its the next route to check really.

I have noticed that one of the Mask Rom sockets is wonkily soldered in so Im going to replace that to see if it helps at all.

Another issue the game had, which was a very minor one, was that player one had no heavy punch. Player 2 was fine. So I started looking around the edge connector and tracing back from the player one A button connector into the board. The trace seemed to come into a small bank of 3 LS245's not far from the edge, and one of them was socketed which makes me think its been repaired in the past. So I switched that socketed chip out for one of the LS245's I had but it didn't change anything. So I re-traced and then cut out and socketed the 3rd in the bank. Without the chip player two has no movement or punches. So I put a new chip in and he worked again. Well, there's only one chip left in that bank, number 2. So I snipped him out and player one had no movement or punches. Popped a new socket in there and new chip and BINGO! Player one has all his punches now! A small victory!! The first bit of game repair I've done, albeit a very minor one. It's a good sign though that I might be able to get to the bottom of the graphical issue.

I also made up a quick CPS1 kick harness from an old sega megadrive pad's connector and an old header connector from a digital tv box I salvaged for parts. Worked first time which I was rather surprised at haha and all kicks work on both players! :D 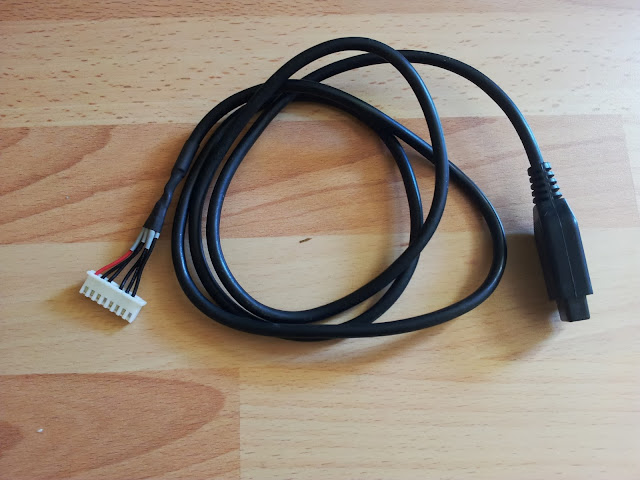 So the next steps for this repair is to start using my Logic Probe a little more and get to grips with using it and understanding how it works. The datasheets for TTL chips on these boards are COMPLICATED!!! haha. But Im sure I can learn how to read them.

Im going to keep 'shotgunning' the board and see how I go. Its all experience in messing around in this hobby anyway. And its interesting seeing what happens when you take a chip away and see what's changed. :-)

Right, this was just a quick update really as it's been a while because I've had my head down. I'll try to get a load of photos of my new Supergun and make a post on that as Im really really pleased and proud of how its turned out. It's a 100% nicer than my first Supergun.