As I mentioned in a post last week I think it was, or maybe the week before, I went to the Revival Winter Warmer retro event in wolverhampton on sunday.

I went on my own this year as I didn't want to drag my wife along and then worry the whole time that she was bored when Im geeking out and playing on everything in site. So off on my todd I went and after a few moments of getting lost on the way I turned up safe and sound and ready to get my geek on.

Well as you walk in you could just hear people. Simple as that, so much converstation and laughter mixed in with bleeps and bloops from arcade machines, pinballs and retro computers and consoles. It was so cool to see! The place was packed and apparently sunday was the quiet day!! 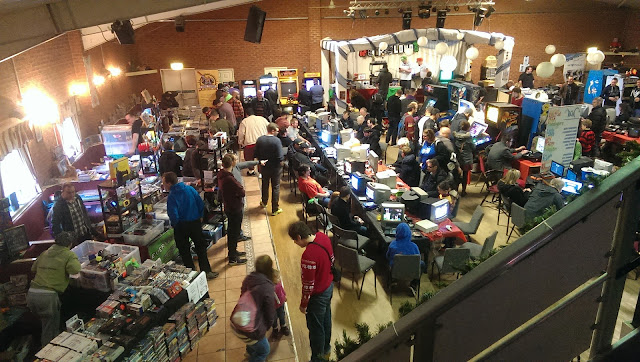 From the get go I scoped out some of the stalls which had a lot of backlit and biverted game boys and loads of games! Not just gameboy games but for every system, including imports. Man you could route through the games all day long! I bought myself a copy of Dr Mario for the gameboy from one stall specialising in gameboy's. I traded in my spare Super Mario World 2 : 6 golden coins and got it for £3. BARGAIN! And as I was putting The Dr in his new home in my gameboy case the stall owner spotted my BC Kid game and asked if I fancied selling it as he'd been hunting it for ages. Well I offered a trade which he agreed to and I did a nice swap for Megaman : Dr Wileys Revenge. Very happy about that! Woop! BC Kid was a cool game but I've got a Megaman itch that needs to be scratched and it was a fair trade. It was very cool that the stall owner was up for trades etc, it made the whole experience really friendly and like-minded. 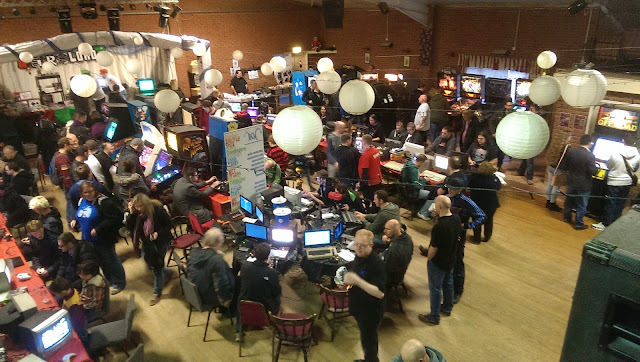 Man and the selection of machines was top notch, I finally managed to have a go on a Virtual Boy and I thought it was really really cool! It did make my eyes hurt after 5 minutes but the depth and 3D in it worked really well I thought. I don't think I'd like to own one though as I wouldn't get much use out of it because of the eye ache but the unit and the shooting game I played was really cool! 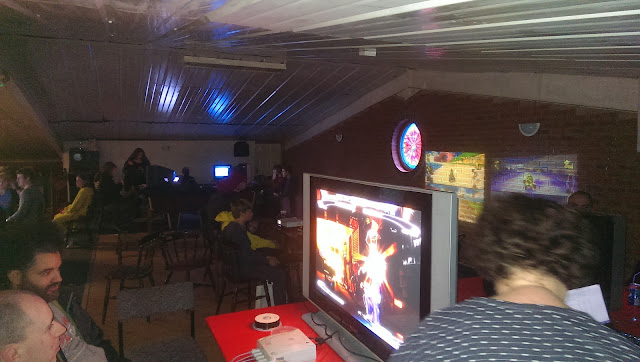 There were a good selection of arcade machines there too which I tried to have a go on each of them. I think I only missed out on a few as they were really busy, such as the two Outrun games they had. Outrun and Turbo Outrun.

I loved having a go on a Point Blank machine again, I used to put so much money in the one they had at the Super Bowl in Burton as a kid so that was a wicked hit of nostalgia.

I don't really want to just ramble and ramble but the event was great! Like minded people, randomly playing Street Fighter 3 against a guy I didn't know but made friends with was really cool. And to top it off we were playing on a great Sega Blast City candy cab! Top banana!

I highly recommend going to a Revival retro event if you've never been. They are going to be back in 2016 at the larger location, I think it will be the wolverhampton race course again. I went there 2 years ago with my mate and it was immense! I'm going to try to get to that event too! Certainly after such a good event this weekend. :D