....you need to change the battery while the game is on!..

haha, yeah that's why I've been putting off doing it. You need to keep the game on while you desolder the old battery and then solder in the new one. I mean, the process of changing the battery is super simple but doing it while the board is propped on its side so you can get easy access to the top and bottom makes it a lot more delicate. If you press too hard on anything the board will move, potentially slide and you can touch other parts of the board by accident with the soldering iron or your hand and short something. Or cause it to lose power, which while the battery is disconnected will just brick your game and it's phoenix time. Which is what I didn't want to happen.

So I set myself up as best as I could and did everything methodically and checked my work at each stage just because I wanted to be super careful and I love this game and really don't want to knacker it up. 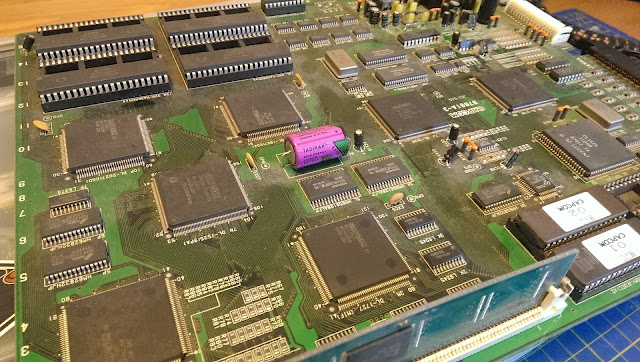 Here you can see the offending battery, which to be honest was still in good shape. No leaking or bloating or anything. But it's been in there since 2011 and I wanted to get a fresh one in to help prolong the life of this game in it's original form. 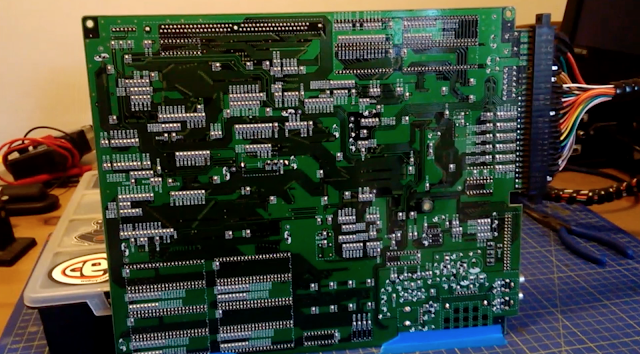 Sorry this image is a screenshot from the video I made documenting my progress with this swap (see bottom of this post for video). I forgot to take a photo of it propped up as I was psyching myself up to go for the desolder haha. So this is how I had the game propped up. I electrical taped both sides of the edge of the board that's touching my hobby mat so that the game couldn't slide out from under itself. That would be pretty disasterous! And you can hopefully see its leaning against my plastic main soldering box. It's pretty heavy and with it leaning towards it the game can't fall forward as I work. And you can see the Jamma edge on there too. 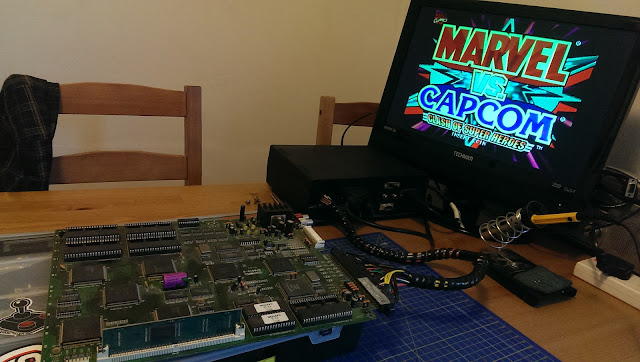 And SUCCESS!!! Here you can see the game working with it's fresh new battery in place! WOO!! The actual swap was a simple job in the end, I was just super careful with how I put the solder sucker on there etc to desolder the old battery. I did have a little bit of a heart attack when I was cleaning the last bit of solder of one of the pads that looked like it might be obscuring a bit of one of the holes and it might make pocking one of the legs through a little tricky. I didn't realise but the games music had stopped! I looked over to my TV and the screen was frozen with the small Capcom logo in the middle bottom bit of the screen and the rest of the screen had a Patent number, Patent number text written all across the screen. I thought for sure it's dead and I'd moved the board too much or something. I was gutted. Well I finished putting the new battery in and trimmed its legs. Then I turned it off because I'd have to turn it off at some point to put the game away. And when I turned it back on the flippin' thing worked!! Man I was so happy! haha

So I did it! The battery change didn't take very long at all in the end and now I'd done it it's not that scary anymore. I must admit that I couldn't find much at all about changing the batteries on these boards just comments about doing it while the game is on. The only real posts I did find ended up being from a Blog written by the guy who owned this game! I bought it off him via Arcade Otaku. I recognised the scratches on the metal casing. So this game seems to be the poster boy for the battery swap :-P

Below is the video I made of the battery change each step of the way. Except for the actual battery swap. I was too scared to do that on video in case I messed it up worrying about talking on camera or if the camera was in focus or had fallen over etc.

So there you go, I wanted to post up something about the swap I did as information is fairly scarce on swapping out the batteries on these boards. And hopefully it'll help if you have an All-in-one and want / need to change the battery on it but don't really know how to go about it.

Good luck and see you soon