It’s been a little while *again* for updates. I keep meaning to do little posts but time just keeps getting away from me. But this month I’m super excited about an event that’s happening at the end of it. Revival Summer Solstice!! I bought my ticket about 2 months ago now and it took me ages to decide which day to choose to go on. I knew that there were going to be talks at this event, much like they had at the original Revival event a few years ago but I wasn’t sure which day would have which speakers etc as they’ve been drip feeding information about the show every couple of weeks. Well I decided in the end, as its school summer holidays and me and my wife don’t have to work on the saturday morning running a band that I will take the opportunity and go on the Saturday. Well I found out last week that I lucked out!! 50/50 chance mind you. But the saturday is the day they are having all the talks from people who used too and still do work in the industry. And on the sunday is when Retro Asylum are recording for a podcast from the show. So, even though that would be cool I’m stoked I should be able to attend some of the talks from people such as Jim Bagley who must be a super interesting guy because he’s creating some of the coolest “I just want to do this because no-one else has” kinds of projects over the last few years. So as well as going on all the arcade machines I can get my hands on again I’m psyched to get to hear some people talk too!

So if your going to the event on Saturday and do read my stupid blog you might end up having a 2 player game with me on an arcade machine and not even know haha.

Well project wise I’ve just been plugging away on my Summer Project I issued to myself when I get chance. Each stage is taking me so long because Im completely learning new things and skills every time I get to work on it. So each step is very drawn out but so far *touch wood* its going okay. One of the things I had been doing was playing around with my Raspberry Pi 2 which I got for christmas. I have Retro Pie on there but I’ve been really wanting to set it so that vertical games are orientated the correct way, so I have to turn my monitor. I’m not a fan of the fit it to a landscape screen setting that seems to be on all MAME setups as standard. But I’ve been struggling a lot with it. I don’t ever use Linux so again I’m learning in bits each time I play with it. And you might thing “well, why bother messing around with rotating your screen?! You can still play the game. Well, if you see below where I was playing a bit of Gunbird, you get to see it so much better! Look how it fills the screen. Your not leaving half of the screen for just black space, that suckers getting full with shoot-y goodness! ahem. haha. 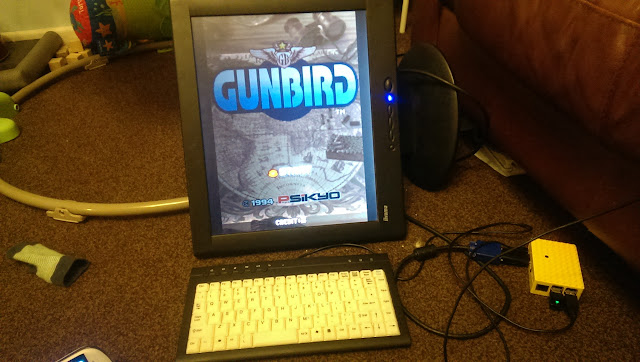 But I’ve got to figure out how to get my Pi-Mame / AdvMame or whichever to do game by game screen rotation / orientation. I’ve joined a retro pie group on Facebook though that seem to be super knowledgable so I should hopefully be able to get some help at some point. I need to get scan lines going on there too, that would be the icing on the cake! :-P

Anyway, I’ve not really been up to much other than playing in bands and helping do other things that aren’t really retro / geek related. I’ll get there though, chipping away.

Right, time to sign off and ticking off the days till its Revival !