As I think I mentioned in my last post, I was super pumped to get de-soldering and re-wiring the Neptune with the Gigibit Ethernet wiring.

During last week I had a bit of a cold and managed to trap a nerve in my back and bottom of my neck by sneezing. Sneezing! It always happens doing something stupid hey! haha. Well come friday night my neck felt like it was pretty much back to normal and all was super good. On track for the Saturday Soldering.

Come 4am Saturday morning and I wake up in excruciating pain!! Somehow I must have moved or rolled in my sleep and completely tweaked out my back/neck. Its the region pretty much in-between my shoulder blades. I couldn't hardly get out of bed, move my head at all or pretty much move without it sending shooting pains all over the place. Not the nicest thing to happen at all to say the least.

So not being able to move my head left, right, up or down pretty much put play to me hunching over a soldering iron working on the Neptune cus it would have completely killed me off.

So I ended up spending the weekend pretty much chilling out with my girlfriend watching films and Big Bang Theory. One really cool thing about being forced to just chill out was my girlfriend who doesn't like consoles and games asked me if I wanted to carry on our Co-Op mission on Castle Crashers. Hell Yeah!!! :-D We haven't played it for about a year I think.

We started at 8:30pm and didn't turn it off till 2am saturday night. It was great fun!

Roll on Sunday and I'm still walking around like Robo-cop, stiff as a board! No soldering for me but I managed to get a little bit of filling done on the case and then got the first couple of layers of primer on so I can start sanding and filling properly. 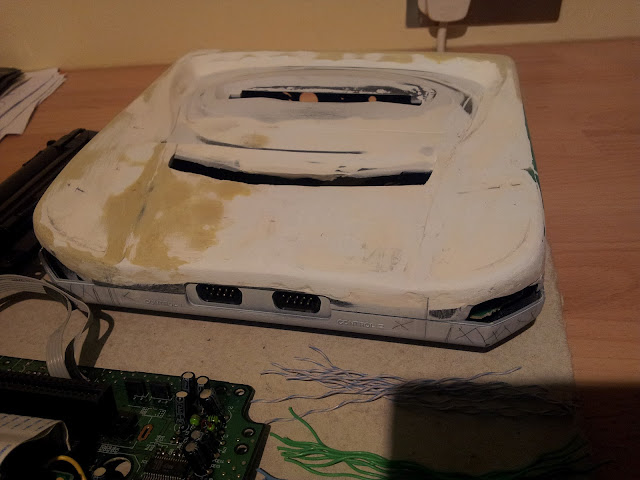 Last night my neck eased off quite a lot so I hit my Neptune case with a load of large grit sand paper to start smoothing the sucker out. And also got to de-soldering the crappy IDE wires from the 32x - Megadrive.

I learned something that soldering Noobies like me really should know about. Always, ALWAYS look at where your soldering iron is and never reach for it without looking!! That's an important lesson to learn ;-) otherwise you will do what I did and just reach and attempt to pick it up by the heating element right after the handle!! Hot soldering irons buuuurnn!!! doh! You will get a tingly index finger fo-sho-yo!

Anyway. I've got the 32x to Megadrive all de-soldered but have to repair the megadrive as i managed to pull a trace on it like a noob! If I can get this thing working its going to be a real Frankenstein!! haha.

The photo above and below show my Neptune case in a very rough form with the de-soldered 32X and the new ethernet wires cut to length. It's a bit hard to see the case shape in the photo cus its a mix of white primer and white and green Milliput. But I'm well pleased with how the shape is coming. :-) Doesn't look much like the original Megadrive 2 case anymore. 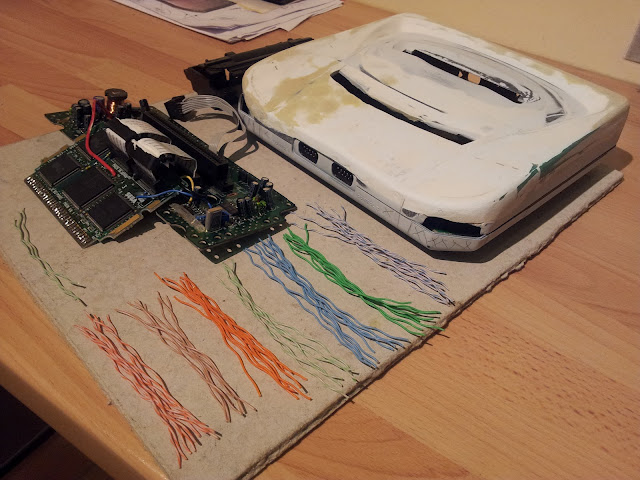 I'm sure when I post up more photos of the progress of my replica case people will wonder why I haven't tried to make a case from scratch. I would ideally make a scratch built case as from what I can see the Neptune is slightly wider than the Megadrive 2, well it looks it in some photos anyway. BUT I didn't want to have to try and line up all the pegs and holes for the mounting of the Megadrive PCB to the case. I know I would have a nightmare trying to get them all lined up.

Also I get to use all the cool embossed and stamped text that's on the Megadrive case such as "Controller 1" "Controller 2" and "Catridge Input" which will make it look more "legit" to me. Also the rear of the console will look better as the A/V and power holes are already there too. I wanted the Neptune to still be compatible with the Sega CD2 as well, and the prototype photos I've seen have a CD expansion port on the side, and If I scratch built the case I'm sure I wouldn't be able to get it all to line up properly.

I will be hopefully preparing all the ethernet wires next and fixing the damaged trace on the Megadrive.