But unfortunetly It doesn't work :-(

I completed the rest of the tutorial on Saturday. Soldering in all 64 wires from the 32x cartridge points to the de-soldered cartridge area of the Megadrive 2. Its a lot more fiddly than I was expecting it to be! Using the IDE cables made it easier to keep track of which wires went where etc but it still put you in awkward positions to solder. I'm very glad I didn't go the individual wires route, that's for sure!

With all the wires soldered to their new locations it looks pretty neat and tidy and it all fits into the Megadrive 2's lower case without the wires pulling away from their joints. That's a big improvement from the original wiring attempts haha.

When you plug the power and A/V cables in and switch the sucker on though, nothing. Its pumping out a signal of sorts. The screen flicks and goes black and there is a low buzz but that seems to be all. Actually that's not completely true, there is a funny barcode looking block on the bottom of the screen with an empty area next to it. Weird.

My earlier attempts at soldering the Megadrive 2 and 32x link wires in for initial testings pulled a trace away from the 32x which I've fixed with a bridging wire so it shouldn't be that I don't think. It's only on the linking area of the PCB so shouldn't be a critical point from my research on the internet.

I have the feeling that the 32x didn't really work when I got it as it came without cables and untested from ebay. I've done the usual 'repair' technique of removing and cleaning the white ribbon cables and re-seating them but, nadda!

So the next step has me back on the hunt for a 32x to get the Neptune to live! I'm not giving up on the project that's for sure! :-D

I'm going to post up on some forums my problems I'm having with the 32x in a hope that some guru's who've successfully completed Neptune's in the past will know how to fix it or wether the 32x is dead after all.

We will see, the Neptune will live!

Check below for some of my progress photos so far. Click the thumbnail images to see the fullsize versions. 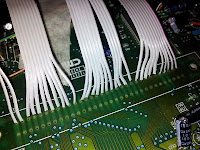 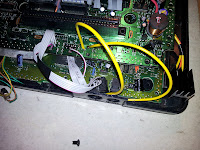 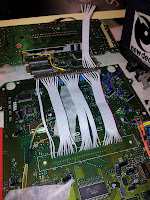 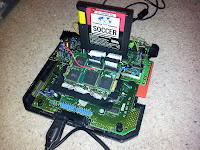 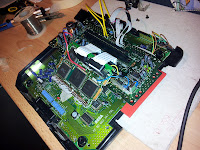