Its been about a week since I did any more work on my Sega Neptune mod. I'd become a little dishearted with my progress. I couldn't get a proper connection test done with the 32x plugged into the Megadrive 2 with the power and A/V's wired up. It seems that the wires I bought from Maplins are too stiff. Everytime I placed the Megadrive 32x combo into the lower part of the megadrive case wires kept coming away from the solder joints. Rather annoying to say the least!

So I decided to completely re-wire all the work I'd done so far. I've seen a completed Neptune project on photobucket and he'd used IDE Ribbon wire instead of the type of wire I'd bought and it looked really nice.

Today I got on the desoldering work and have gotten a lot of practice now with my Solder Sucker. I'm getting pretty good with it now which is great as I couldn't really get it to work before. After desoldering 2 A/V outs and a Power Input I decided to tackle the desoldering of the cartridge slot on the megadrive 2. All 64 points! The board looks very clean without the cart slot on it.

I then re-wired the A/V out on the 32x with IDE cable and its a lot neater now and easier to solder up than individual wires.

After that its tinning the cartridge slot on the 32x so It can be wired to the Megadrive 2. Its a bit of a no return step when you get solder onto the cartridge points so I was a little apprehensive with attempting it but it went okay. Oh and I also noticed that the prototype name for the 32x is printed on the board, Mars. Pretty nifty in a geeky way.

So all in all I'm pretty pleased with how my soldering skills have progressed. Hopefully it will all work once its completed. 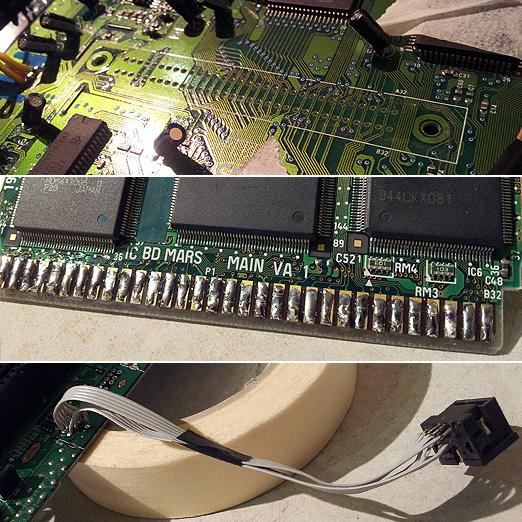