SLOWLY GETTING BACK INTO PROJECT STUFF

I'm back!!! :D Well, I'm not in full on geek project mode again but it's getting there. Our wedding and Honeymoon have now passed which has gone far too quickly!! But the day was amazing and went exactly how we wanted which is all you can ask for. Perfect! Then the day after our wedding we jetted off to Singapore for 4 days then hopped onto another plane and went to Bali for 6 days. The honeymoon was so awesome and such a change of pace from here at home. It was 4 days of non-stop sight-seeing and walking about and then 6 days of non-stop chilling out and relaxing and swimming. It was absolutely brilliant!

Then the next weekend we were off to Gloucester for a Lindy Hop weekend, 3 nights of social dances and 2 full days of workshops/lessons. We love this weekend which happens every year and it was the icing on the cake of our wedding few weeks. :D

Now we're home and getting back to normal I've started finding the time to get some more work done on my Neptune. Not so much the case but the wiring for the modular idea I've had where I won't potentially be ruining an expensive 32x to make a Neptune.

So I've been doodling what I need to do. 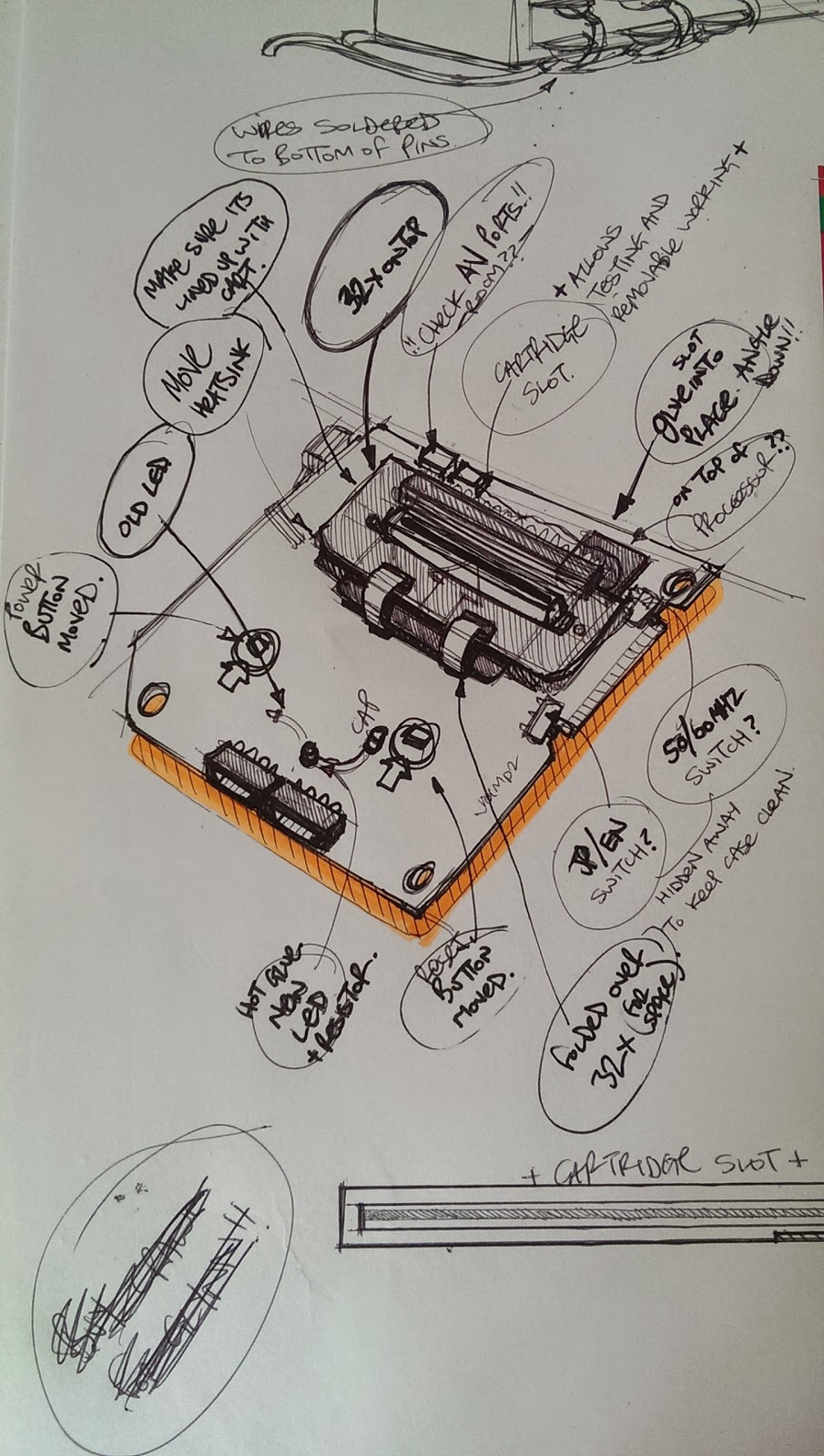 As you can see from the picture on the right I'm going to do the Fold Under way of mounting the 32x because of the new placement of the power and reset buttons. They are moved up the board closer to the cart slot, see the photo later on, so the normal stretched out 32x layout wont work as the cartridge connecter area goes over the buttons and they wont work.

The modular idea is to desolder the megadrive's cartridge slot and rather than binning it like you would normally I'm going to solder the short wires to this so that its a repostitioned cart slot. This will mean that I wont have to solder straight to the 32x. I want to not have to do too much modding to the 32x if I can help it and if I can I don't want to put solder all over the cart pins on the 32x. Its going to be a bit tighter in there because of the cart slot but thats the plan anyway.


And once I’ve gotten the cartridge slot moved, which I’m not looking forward to as its a lot of wires to solder and they are the lovely little wires that love to pull away from solder or to snap if you move them even remotely quickly, I’ll then have to get onto making some wires that will hook the 32x up internally. Normally with the Neptune mod you either desolder the A/V in and out ports on the back as well as the PSU port and solder wires from them to the required places on the Megadrive’s motherboard. Obviously with this modular route I don’t want to be taking things off the 32x or soldering to it if possible, I want this expensive peripheral to still be nice, and also problem solvable. I think I have 2 Megadrive 2 A/V plugs in my tool box at home so my plan is to create 2 wires with A/V plugs on the ends that will plug into the 32x. One will go into the A/V in port which will be soldered to the underside of the Megadrive 2’s A/V out area. The other will be soldered to the original Megadrive 2’s A/V port which will be mounted upside down as of The Longhorn Engineer’s original design. Then, in theory the wiring will work exactly the same as the normal way of doing the mod but in a plug and play way. The PSU connection will be done the same way the Mega-CD tail I made for my Jammadrive 2. I will need to sacrifice a Megadrive PSU to get the port but it should also work fine having a plug inside the case.

I’ve been writing this post over the span of 2 weeks when I’ve got snippets of time and I’ve actually done some of the modifications to the Neptune wiring already. So I thought I would show its progress so far. Bare in mind I don’t have a working 32x yet, I only have my original FUBAR’d one which I’m using for checking on spacings inside the case etc. 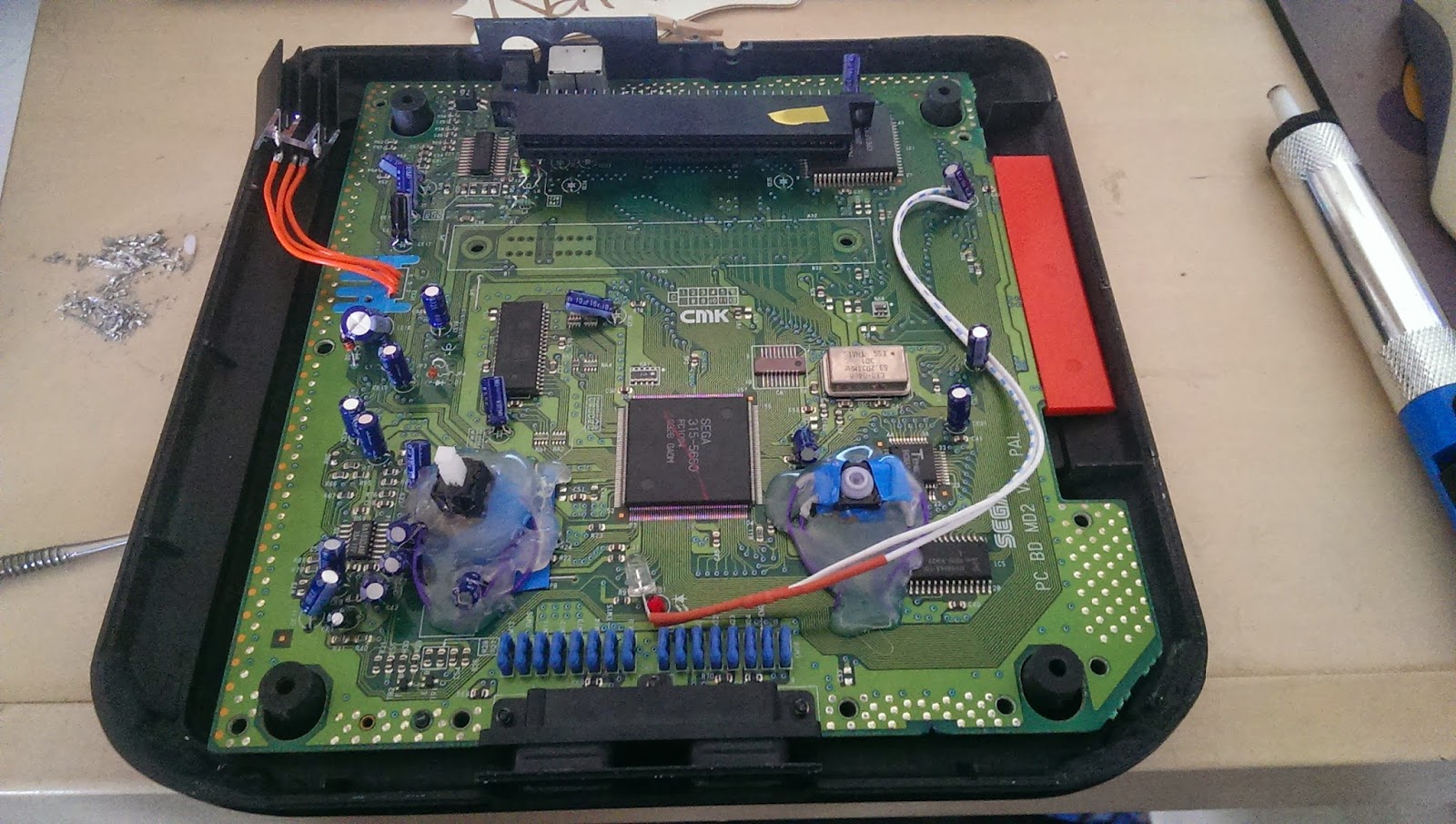 This weekend I started the long task of desoldering the cartridge port and wiring up all the extension wires to it. I’ve recently been getting into The Game Chasers web show on youtube and this kept me company through the slightly tedious task of stepping and repeating the wiring. Here are a few photos of the process of extending the cartridge slot so that it will sit in the position I’ve been thinking will work best. In these photos you can also see the power on / off and reset buttons that I’ve moved so that they will work with the new positioning of the buttons on the Neptune case. You can also see on the underside of the board where I’ve moved a load of capacitors to the make room for the extended cart slots wires to sit. ( Note - you can see the last cart solder point on the right has come away, this was a gutting moment I must admit, but thankfully I traced where it went off to and managed to patch in the wire when re-wiring the cart slot and it all works) 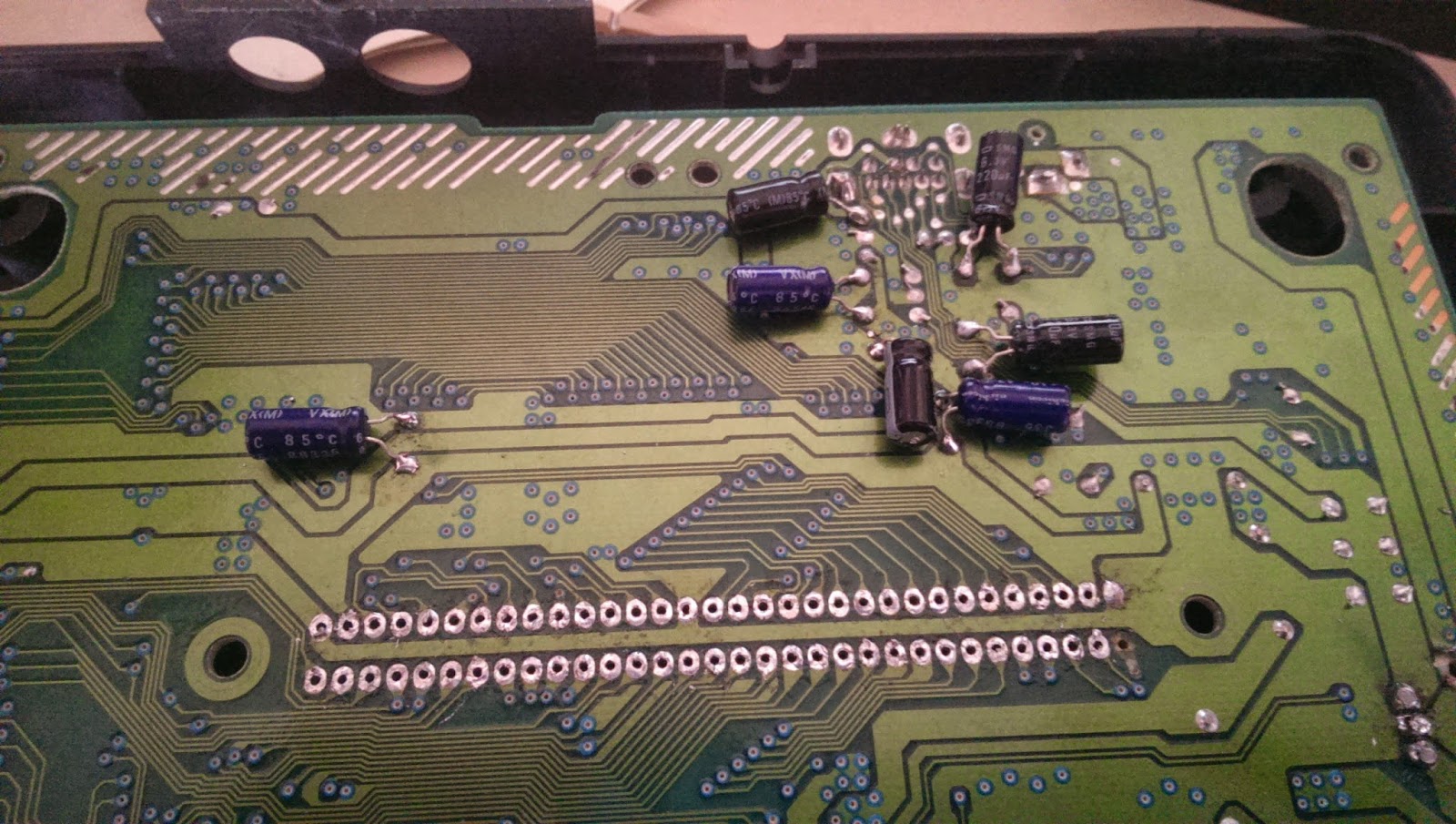 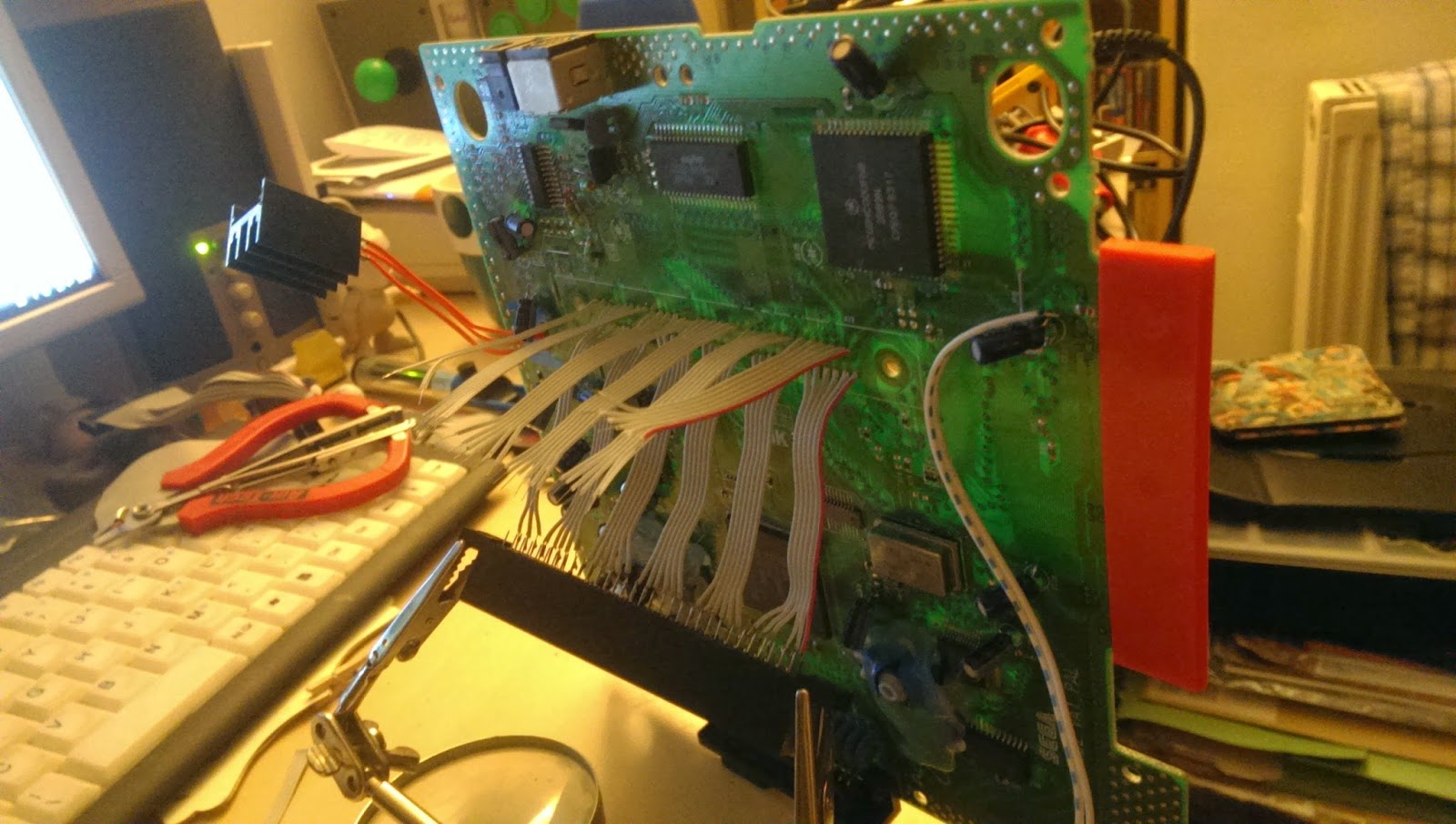 For doing wiring like this I highly recommend the helpful hand crocodile grip stands. They are a god send for holding parts in place while you solder them. It’s such a pain to do this sort of stuff without them. 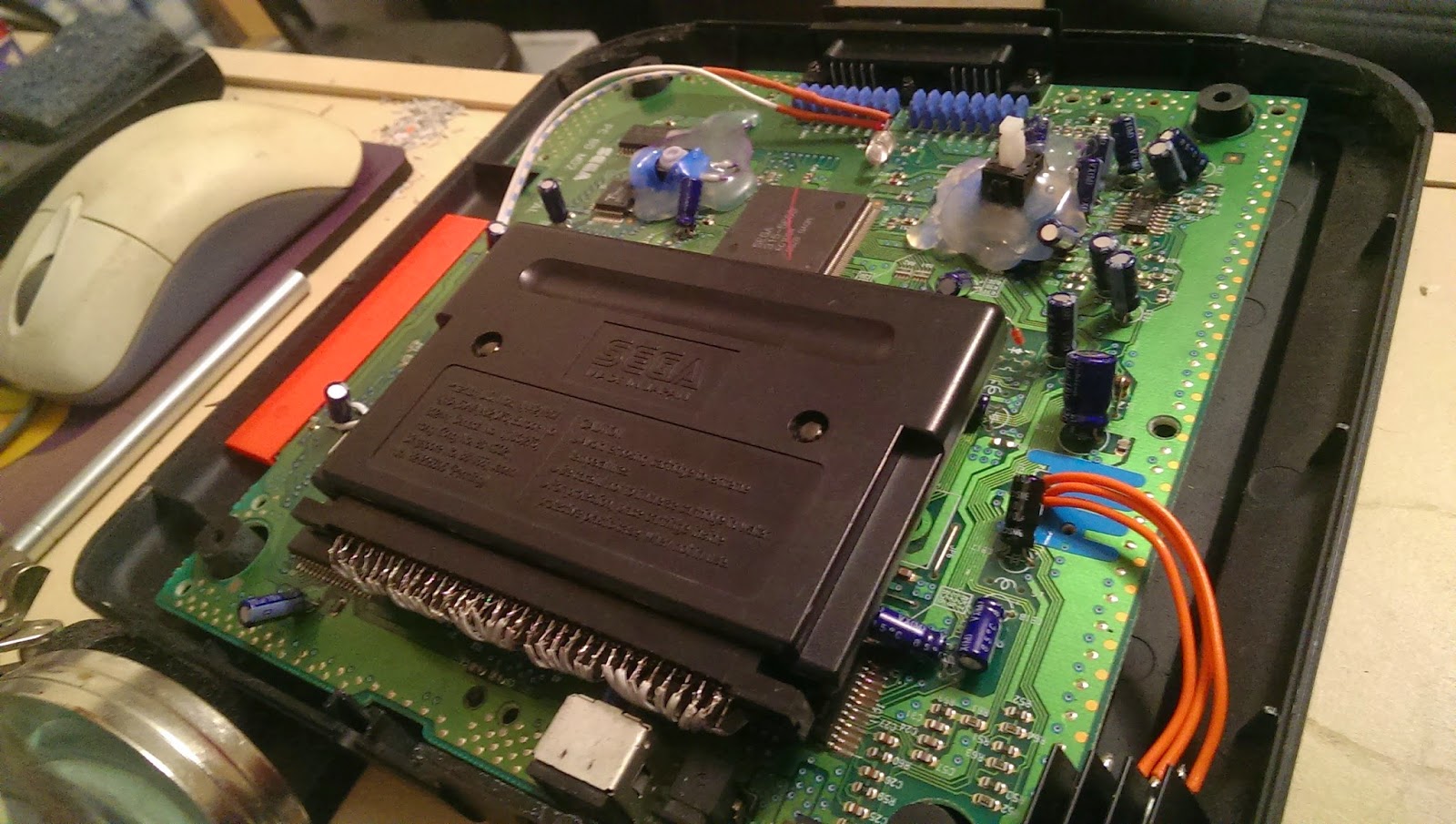 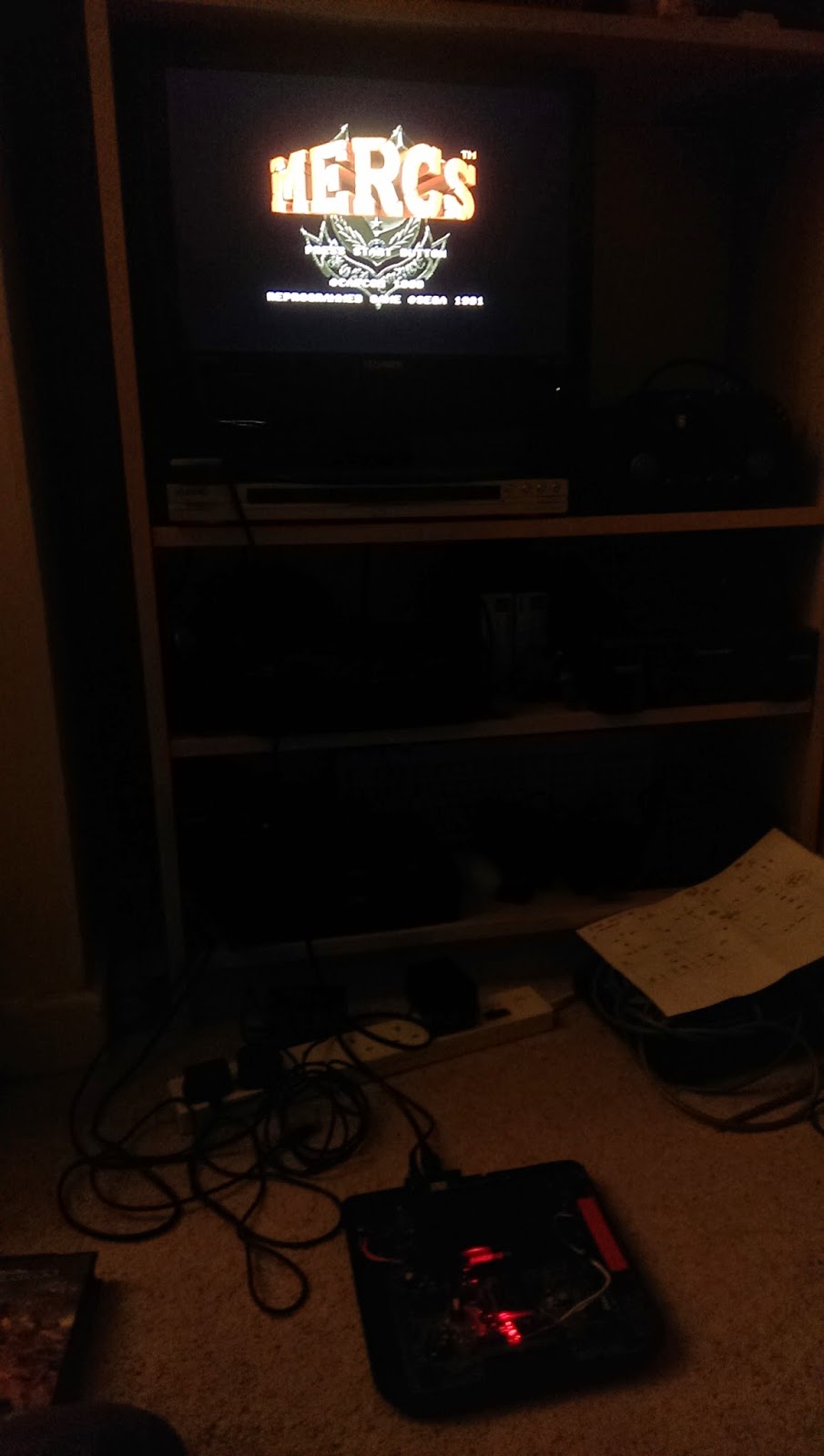 And here you can see the cartridge slot in place with a copy of Sonic 2 in there from when I successfully tested the slot out. Phew that was such a relief when I switched it on and it worked. Its a little buzzy in the audio department but its not too bad and it could possibly be from interference / cross talk from the unshielded wires. I tried a couple of games but I had it twice not load a game for me and when I inspected the wires one or two had come away from the cart slot. I desoldered these little tinkers and tried a pile of my megadrive games out. Games from different producers and I even got the furthest I’ve ever gotten on Shadow Dancer. So while it was still playing I delicately ran some hot glue over the top layer or connections on the cartridge slot to help give the wiring a little bit more grip and hopefully stop any breaks.

The next step was to get my 32x slotted into place and see how it lines up with the cartridge slot on the top of the case. A little disappointingly I couldn’t get the case to close. It seemed to be held apart from the lower part of the case by nearly 5mm. So off I trotted outside with my dremel and a grinding bit and tried to shave out some of the inner plastic a bit more to give me a smidge more room for the chock to sit as this is the bit that seems to be the tallest part on the outer edges of the 32x.
After some trimming and testing and trimming I got the case to close. :-D

Here you can see how the 32x sits in the folded under method connected via the now repositioned megadrive 2 cartridge slot. Its sitting really neatly in there I think and doesn’t look any different to the soldered in place versions other than the fact its still plug and play. 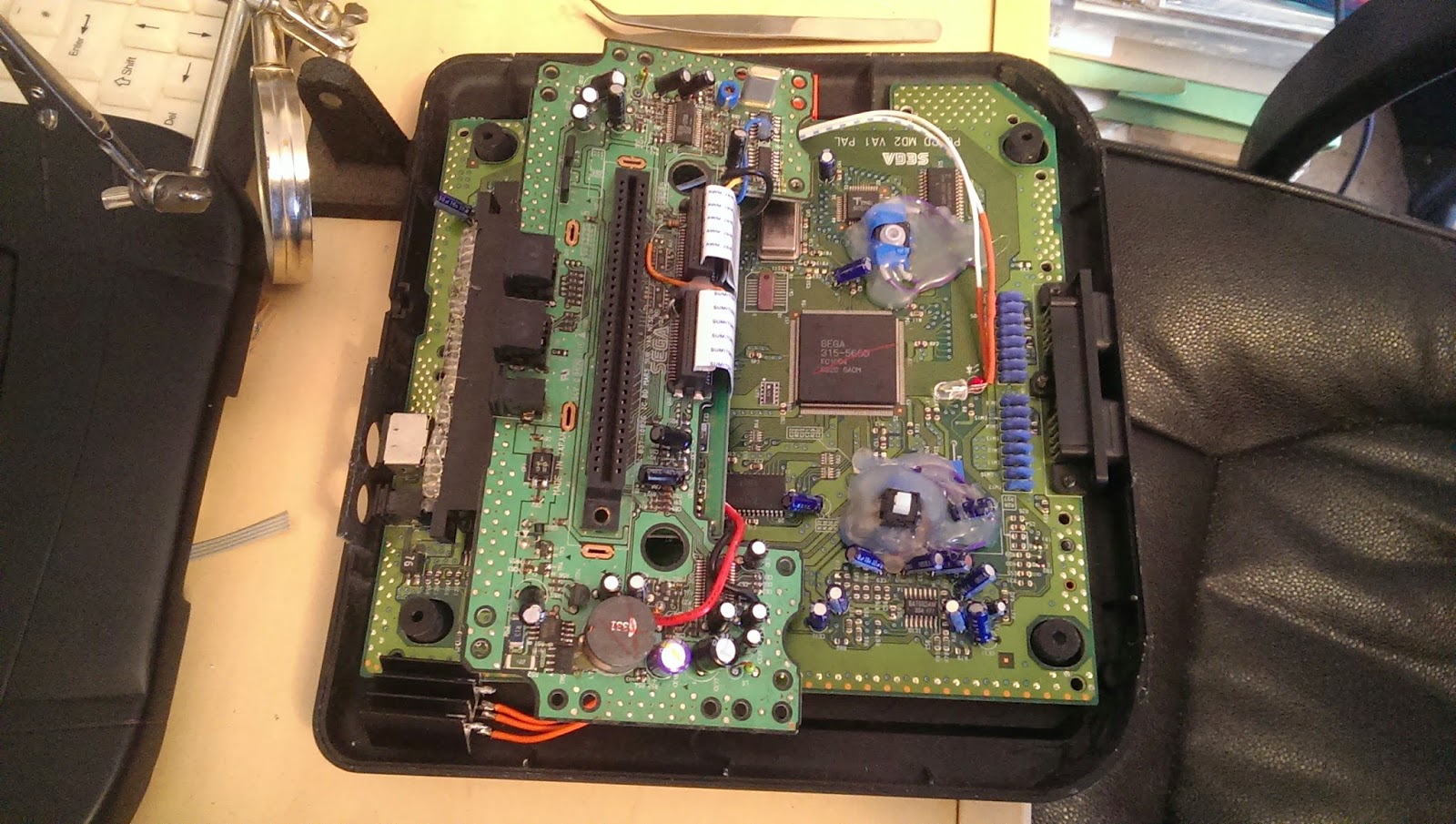 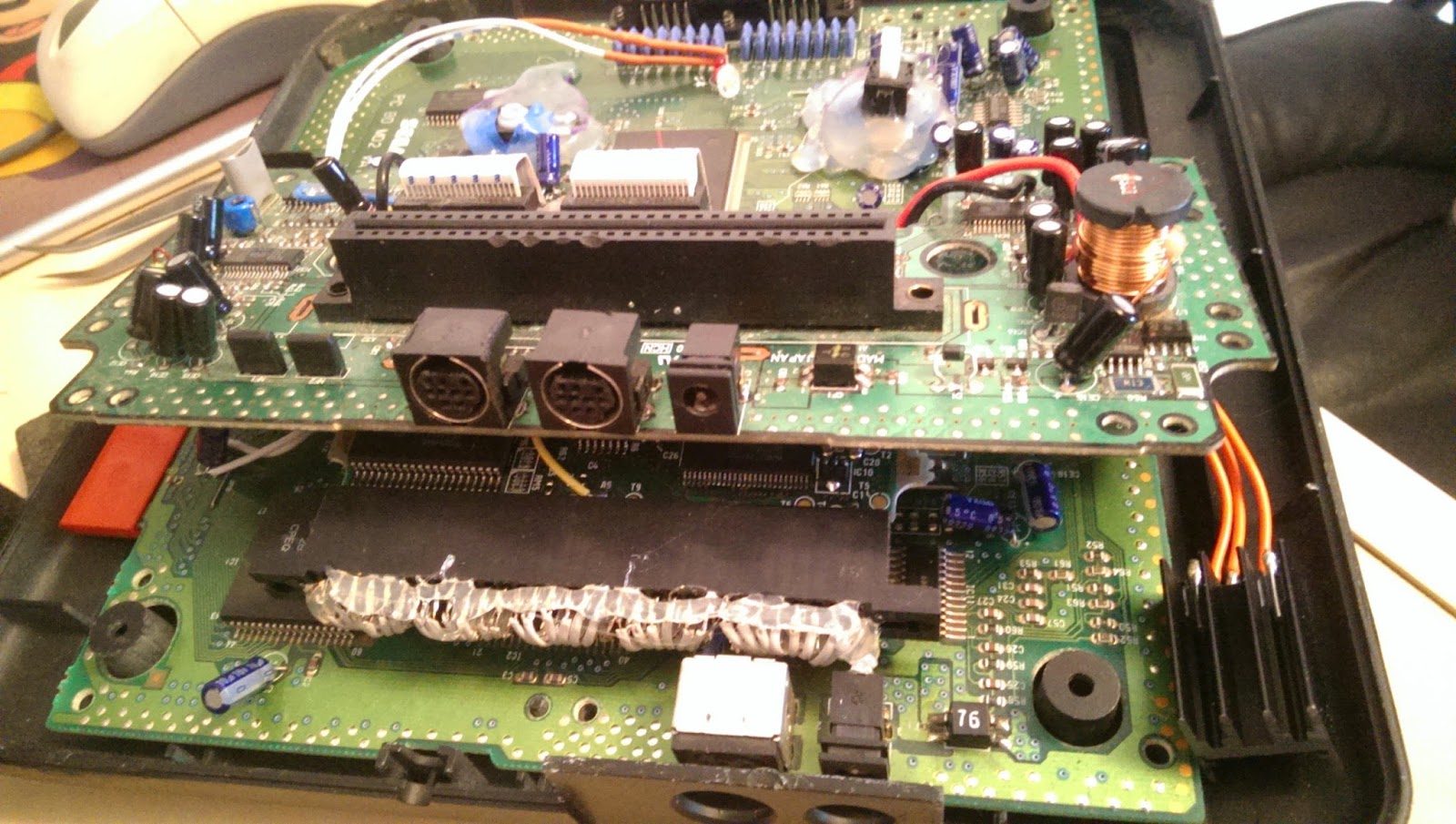 Now onto the last step of getting the 32x to stay put inside the case, other than the outer case gripping it like a vice haha. I needed to find some screws long enough to reach through the 32x, its lower board and the megadrive 2 motherboard and into the lower cases screw holes. This has been something I’ve been trying to find whenever I’ve been in a hardware store to buy different things like paint etc. But I’ve always come up with nothing as hardware screws are always too big, they won’t fit through the cartridge slot holes. It’s been a really pain in the butt.

But like an idiot I forgot that where I work, which is a radio control car manufacturer and distributor, I might actually be surrounded by screws that could work. And low and behold that seemed to be the case!!! The trick is to find screws that are the same dimensions ( M3 ), have a similar thread spacing and also long enough, which seems to be around 30mm. Asking some of the tech guys here I’ve found that these screws fit and seem to work a treat! : http://www.hpiracing.com/en/part/Z574  I originally tried a different screw which also fit but the head of the screw was quite deep and the cartridge wouldn’t sit in the slot low enough to be very stable.

Here you can see the new long screws holding everything into place. WOOP! 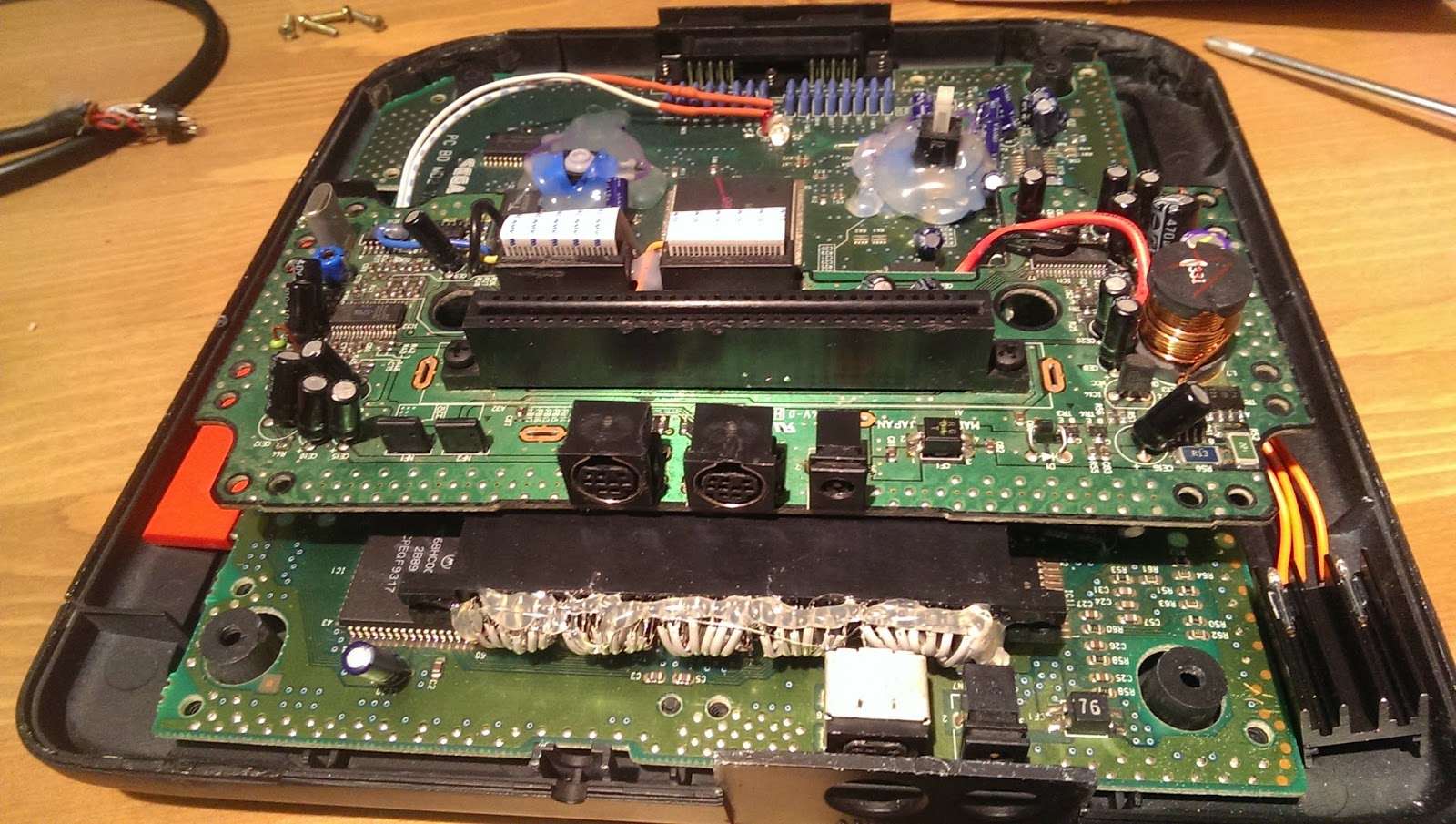 So the next steps, which I haven’t actually done yet. Make some small tin-foil shields to sit between the wires to try and limit any cross talk between the wires. Make 2 sets of A/V cables which will plug into the internally mounted 32x. And finally make a wire to hook up the 32x with power.

So over the next few weeks I’ll tinker away and try to make some A/V and power wires up and get them mounted into the Neptune case. It’s actually all starting to come together finally for this project.