Yep that title is correct! A megadrive 2 that runs in an arcade via JAMMA connection! :-D

I've been eluding to it in the last few posts and seen's I've made a breakthrough with my A/V problem this morning I thought I'd post up the 1st part of my build of this unit.

Its nothing new really building a Jamma compatible megadrive, I'm certainly not the first to do it by any means but I've found a few little things out while building it that weren't really documented when I'd been doing research on them before I started soldering. Also I'm trying to do this Jamma drive a little differently to the others I've seen on the internet. The main difference being that it will be very nearly totally stealthy!! Most jammadrives I've seen have the Jamma fingerboard sticking out of the side of the casing which doesn't look too bad, but to me it won't look just right on the shelf with all the other consoles. So I've decided to make it hidden via a second expansion slot on the megadrives casing. Also I will be over-clocking it and doing the 50/60mhz and language mod's as well as having it power the Sega CD 2 all from the Supergun's power supply. So there won't be a big ol mess of cables everywhere.

Well thats the plan so lets start the progress photos and a bit of rambling. :-)

The first thing I did was scour the internet and read as many forum posts, watch youtube videos and read web-pages about creating the Jamma drive. Trying to get as much research in as possible so that it will run as smoothly as possible. There isn't that much info on doing the mod to a megadrive2 as there is for the megadrive 1, but it shouldn't be too hard to do. . . Also I re-printed the schematics I used for making my Supergun so I had the correct Jamma connections I used.

The next thing was ordering the Jamma fingerboard from ebay. I initially wanted to get the jamma-boards.com blue fingerboard a lot of the american's use but it was a bit hard to find so I opted for a very generic looking plain fingerboard from the UK. Nice and cheap and as long as you check against a schematic you should be fine.

While the fingerboard was on order I decided to start modifying my case so that I will get the stealthy look by hacking it up and trying to add in a new expansion port. As I have some spare megadrive2's around and I had a spare case from a megadrive2 I'd scoured for parts I decided that would be sacrificed for the cause.

I got my dremel out and amputated the right-hand sega-cd expansion port from it. Then I turned to the Jammadrive's case and dremelled out the space for the expansion port to go. 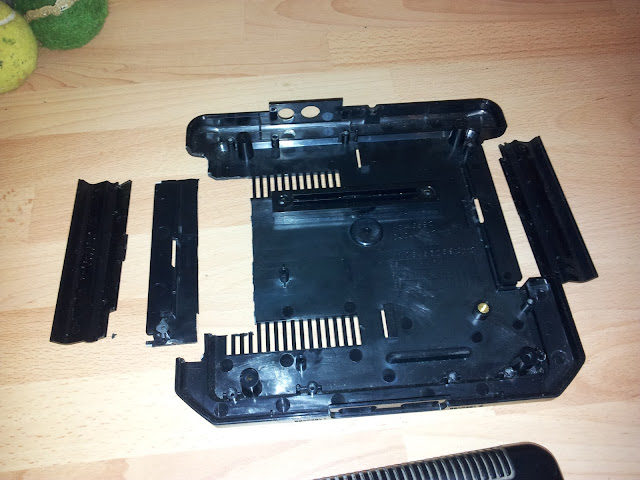 Here you can see the normal expansion port on the right and the new one that will be fitted on the left. I've had to cut the slot a fair bit wider for the Jamma connecter to fit inside the casing so it will reach the fingerboard. I will have to milliput some extra sides onto the port cover to make it all fit nicely together.

With a bit of electrical tape holding it together I tested out that the Jamma connector would fit into the case. With that double checked I set about milliputting and hot glueing the new port into the case. 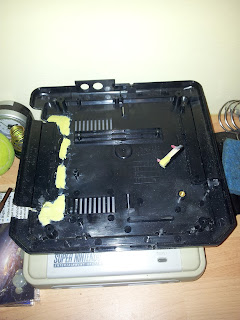 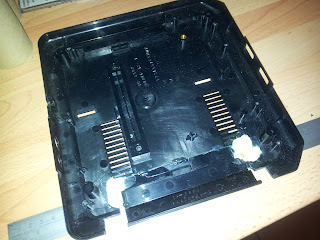 Here you can see the port now milliputted with some hot glue 'tacking' sitting in the jammadrive2 case. Its nice and rigid and should handle the pressure you have to exert on the case to open the darn thing. Next is to extend the cover to make it meet the edges of the case so it looks all OG. ( sitting in the case in the left image is a Neptune button being re-milliputted, yep it's still going on haha)

While I'd been working on the casing the fingerboard turned up from ebay so I set about lining it up with the new expansion port and hot gluing and milliputting it into place so that it should stand up to the connecter being put on it. You don't want it pulling away from the motherboard when your trying to connect up the Supergun to it!! haha. 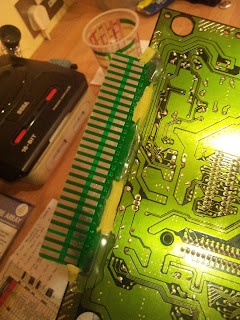 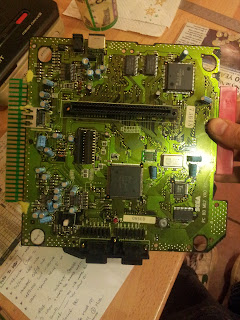 Here you can see I tried to place it inward enough so that the motherboard will take some of the load of the connector but not interfer with areas I will need to solder too. Once the milliput cured it really was stuck on there like rock! Brilliant! 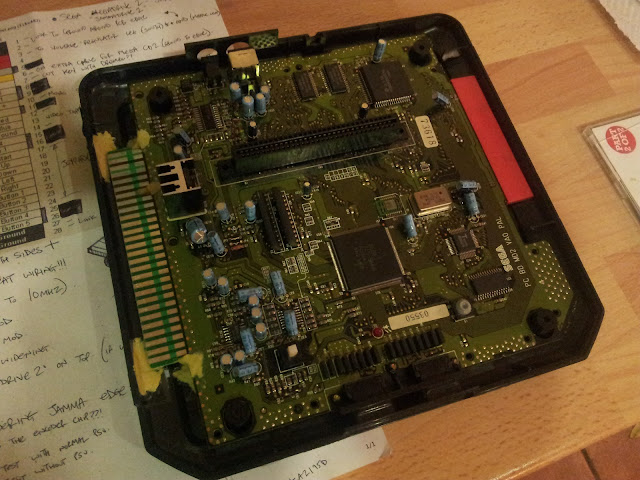 And here's how the Jammadrive sits in its case. Pretty nicely I think!! :-D The fingerboard fits nicely in the gap down the left-hand side and seems to balance the megadrive out a bit now. Also I've extended the sides of the port cover so there are no gaps down the side now. There is some finishing up to do to the case but as I'm an eager beaver I will jump onto the soldering to make sure it is starting to work.

Next part : " The woe's of using multiple guides and information from the interwebs to do simple wiring. " haha