Well now that the Jamma fingerboard is securely attached to the Megadrive 2's PCB and it fits into the case with its new expansion port we'll move onto the wiring. Through the whole process I will keep dibbing away at finishing up the expansion port as I'm using milliput and it takes over night to cure really. So I add little bits here and there and allow them to cure without the chance of me poking them...cus I'll be asleep :-P

To start with I found a few guides on how to make Sega Megadrives into Jamma-drives and all had a similar starting process:
1) Tap the RGB, sync and ground from either the RGB encoder chip or the additional solder pads on the A/V connector under the PCB.
2) Tap the audio from the solder pad under the A/V connector.
3) Plug the Megadrive into the arcade machine / or Supergun's jamma harness with the normal Megadrive PSU and check that video and audio are working okay.

This allows you to problem solve any issues as you haven't made that many connections so far.

Seem's easy enough right. A few wires and your away. Well, thats kind of right.

I decided to solder directly to the RGB encoder chip as some people said that this may provide a stronger RGB signal. I googled the chip in my V01 megadrive 2 and found the pin-out and started trimming and tinning wires and soldering the sucker up.

Well what do you know?! I get picture!! But, the image seems to move, kind of clicks from one point to another and back again. Like its switching between either PAL / NTSC or aspect ratio. Also the biggest problem, there is horizontal bluring through the colours. Really distracting and causing weird colour clashes. Bugger! 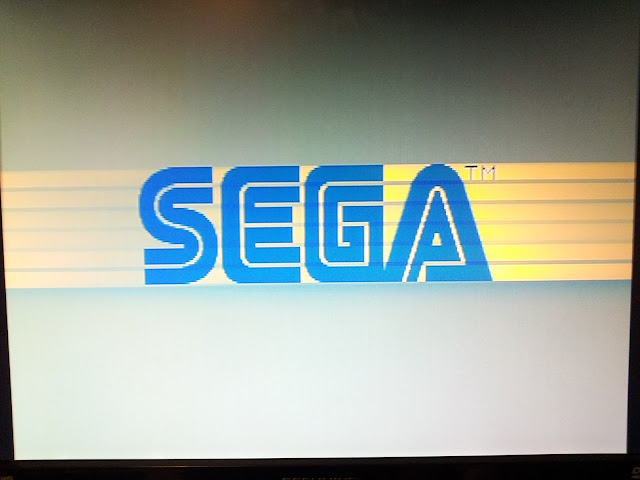 The wiring is so simple where could the problem be?! I assumed that my soldering wasn't neat enough and i'd either bridged two of the suface mount points of the chip so I checked them out and they seemed fine. Hmmm. I unsoldered the wires and then looked up the A/V pinout for the port and wired to the solder pads underneath it. Maybe you can't wire to the chip?

I go upstairs and test and darn it! The same problem! This is frustrating! 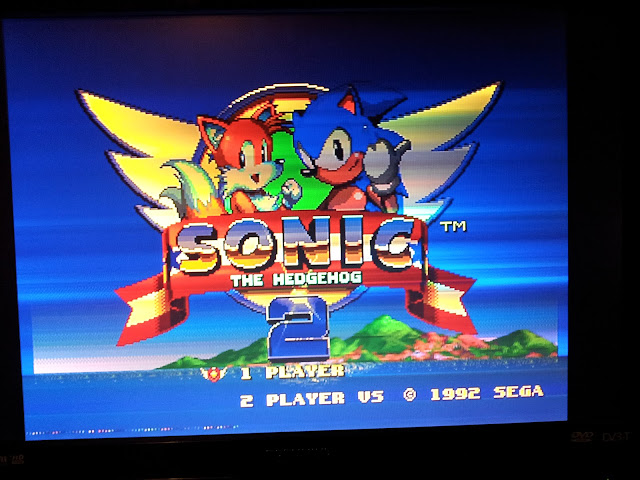 I got a few more pinouts and did some google searches and couldn't find anything on the problem. Then it occured to me that its essentially the same as doing an RGB cable so maybe I need to add the 75ohm resistors and the 220uf capacitors? 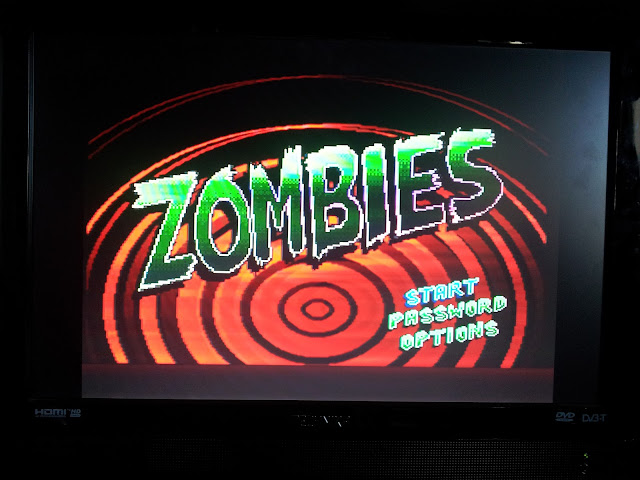 I made up a little Vero board with the resistors and capacitors and wired it up to check. Same problem only this time its a little darker now as the resistors are lowering some of the signal strength. Stupid horizontal RGB blur!! Its a little harder to see in the Zombies photo but that mottling on the circles is caused by the blur and shouldn't be there.

Thinking that maybe the RGB encoder chip might be at fault I decided to make up an RGB Cable for the Megadrive 2. I'd been planning on doing one anyway and had the parts so I got soldering. Using the great guide from mmmonkey.co.uk.

Another test but with the Megadrive 2 hooked up as normal (no jamma) and the new RGB cable and BING, picture is perfect. Nice and sharp with bright colours. Awesome for the cable as that will be used on my other Megadrive 2 and Neptune but bugger because it shows that something is still up with the Jamma wiring.

I found the composite video solder pad on the A/V port area of the Megadrive 2 and moved my sync wire over to there. A quick test and WOOP! The video is perfect!! No horizontal blurring and everything looking like its using the RGB scart cable! 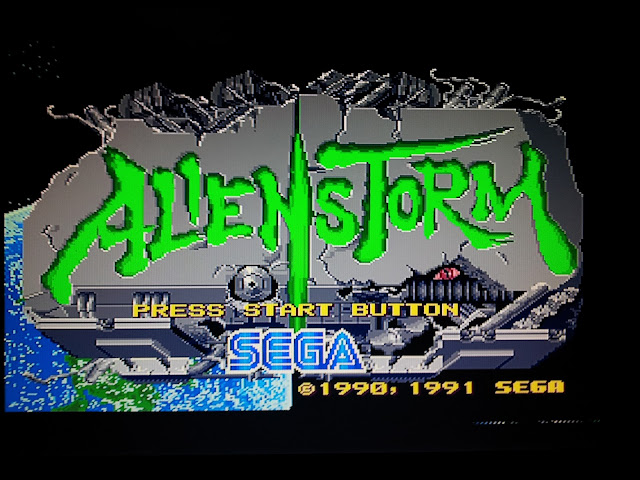 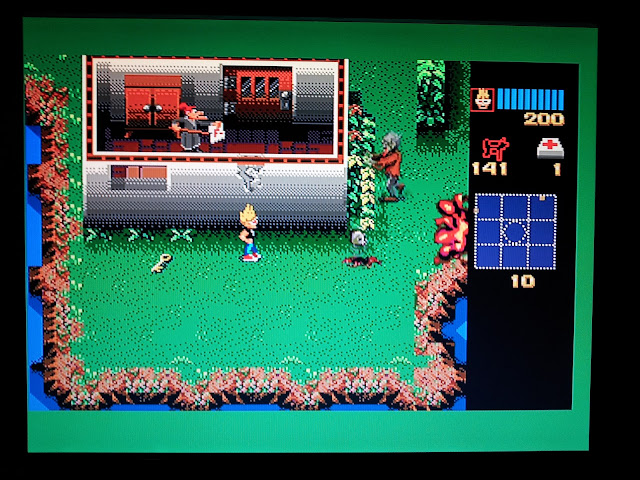 I know, it seems like such a simple and stupid problem to have with the A/V but when everyone says follow the Encoder pin-out and hook up the RGB Sync and Video ground as is rather than using Composite Video out for sync then your going to run into problems. This took me a week and a half of headscratching and fruitless searching to figure out haha. Yes Im that tentative with hooking wires up incase I blow something. 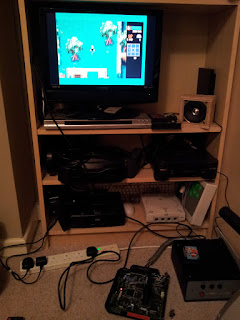 Now that the Video is sorted I hooked up the Mono Audio out from the A/V port area to the Jamma finger board and hooked the Audio ground up to the Jamma fingerboards ground. Thankfully this worked straight away and is super loud through my arcade speaker, so loud i might have to put a volume switch on haha.

Here you can see my testing setup with Zombies (ate my neighbours) running on the Jamma-drive 2 with the audio hooked up. Thank goodness that stage one is figured out!

The next step is to hook up two switches, one for the 50/60mhz PAL/NTSC mod and the other for the English / Japanese language mod. I followed the guide from mmmonkey.co.uk again as I've used this mod on my other Megadrive 2 and it worked a treat!

My aim for doing this project was to try and keep my wiring as neat as I could. This is a problem though when your trouble shooting and having to hack up wires for testing. Its still fairly neat and easy to follow though.

Here you can see the points I soldered the wires too for the language and PAL/NTSC mods. 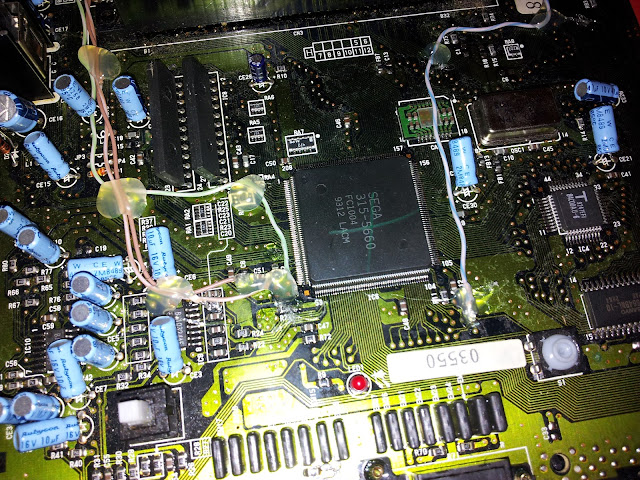 Pretty neat wire routing for me I think :-) and with this mod the hot glue is definetly needed as the points your soldering too are very small and you don't get much solder on there and its very easy to pull and break traces if the wires get snagged or pulled.

And here is my wiring up for the A/V parts of this project. I used some ribbon cable from an old DVD player to try and keep them more neat but the problem solving caused me to seperate the wires out doh. Still, its not too un-tidy I don't think.

Here is the view of the top of the Jamma fingerboard with the Red, Blue, Video ground and Mono Audio wired up. Actually looking again it looks pretty neat still. Once I've completed it the wires will be hot glued into place on the PCB and hopefully routed away from the voltage regulators heatsink as I think that might start to melt the wire casings if used for a long time. 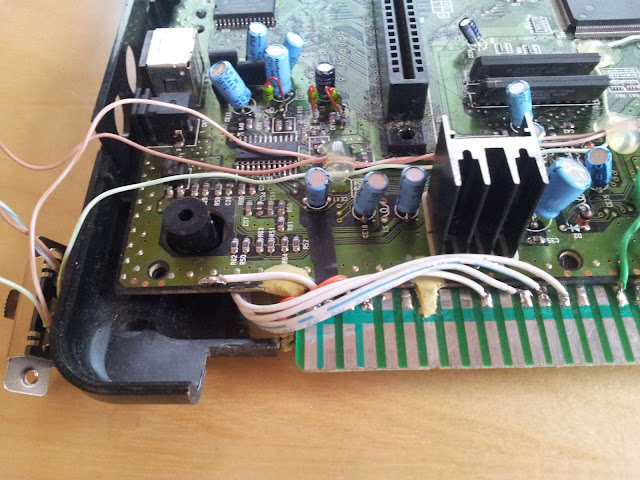 And here you can see the underside of the Jamma-drive 2 with the wiring going to the solder points of the A/V port. Still not too messy and once I'm properly happy they will be hot glued into place to make sure they don't come pulled or anything. :-) 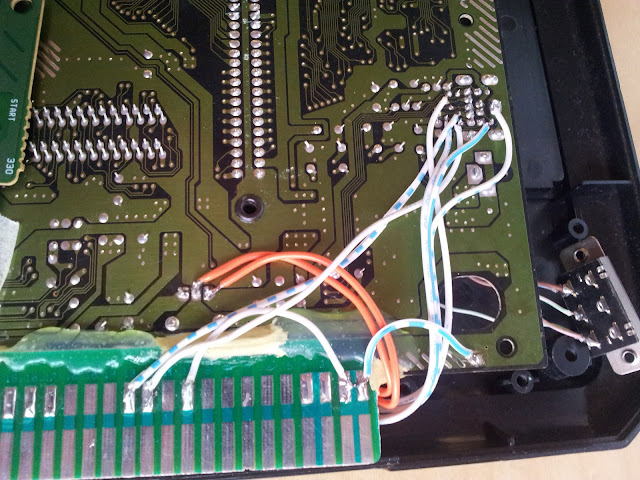 The orange wires are the power lines to the underside of the voltage regulator which are supplying the Megadrive 2 with +5v from the Supergun's arcade power supply so I no longer need to hook it up using the Sega power supply. The Jamma-drive 2 is now A/V and PSU cable free! :-D

Next up is hooking up the first joypad so that I can use my arcade sticks via the Supergun rather than a pad out of the front of the Megadrive.

Hi thia ia great work. Do you have an actual wiring guide you can send or post. I'm trying to do the same to my Megadrive 2 PAL console.

Thanks for the comment Unknown. I'll have a look over my photos on the blog and I should be able to figure out a wiring guide for you. I'll post it up when i get something finished :)

Hi thanks for the reply. Have you got any further with a guide yet,
I've followed your photos as best I can but I can't for the life of me get the controls to work :(

Hi unknown, ah so it's the control your struggling with? I haven't had the chance to start the wiring guide but I will try to start it today. It's been a hectic week leading up to end of term but I should have time now.

So, if it's the controls your struggling with, are you using Sega pads? Or a third party pad? I found the third party pads easier to figure out because Sega changed their circuit board layouts a lot and some pads have hidden grounds for certain buttons and I couldn't figure those ones out.

Hi Unknown, Can you email me with any photos of your Jamma drive you've been building? Its basically all going to come down to the revision of pad's that your using to wether I can help I think. Some of the pads actually have numbers on their PCB's which relate to the pins on the joypad port. These are the ones that are the easiest to get working and figure out. You can email me through my "Contact Me" information on the right hand column of my blog :-)

I've actually managed to suss it out using a combination of your guide and various others for the Megadrive 1.
The problem I was having was locating the correct ground point from the controller to the jamma finger board, as well as the fact a secondary ground was needed from each side of the finger board to the Megadrive mother board. Took me almost three weeks to find it, but it's done and I'm happy playing ToeJam and Earl on my Arcade machine!
I must say, performing this mod is much easier on the Megadrive 2 console.

Thanks for the update! That's awesome to hear! Those ground points are real pains in the ass to find sometimes. Its so good when you get it actually working isn't it! :P I love it!

thanks for the emails. Have fun with your JammaDrive :D