Last week inbetween working on things for my arcade machine (fixing the blackout paper and making extension wires etc) I started work on something I've been wanting to make for ages! A Scan Line Generator for my dreamcast! :D

As always I headed over to mmmonkey's awesome modding website www.mmmonkey.co.uk and started reading up on how you make them and what sort of bits and bobs I would need to get. Well, as it turned out I'd had some fore-thought and bought some of the required IC's and some matrix board last year when I was thinking of giving it ago. So All I would need to get would be the male and female vga ports and a little project box to house it all in.

With this in mind I started out on monday night with my soldering iron and started following mmmonkey's photos and write up. I found it a little confusing at points to follow along and know what was going on but after some cups of tea (and one hot chocolate with all the trimmings) I had a finished off matrix board. Awesome!!

I couldn't try it out though because the next step was to make a VGA extension cable (female - male) so that I could hook the R,G,B, V sync, H sync and Ground up to one end of the cable.

Fast forward a couple of days and I headed over to Maplin in Tamworth and picked up the sockets and project box so I could carry on with my little project. Fast forward to thursday and I get soldering again and the cable is made up and the SLG is soldered up to one end of the cable. 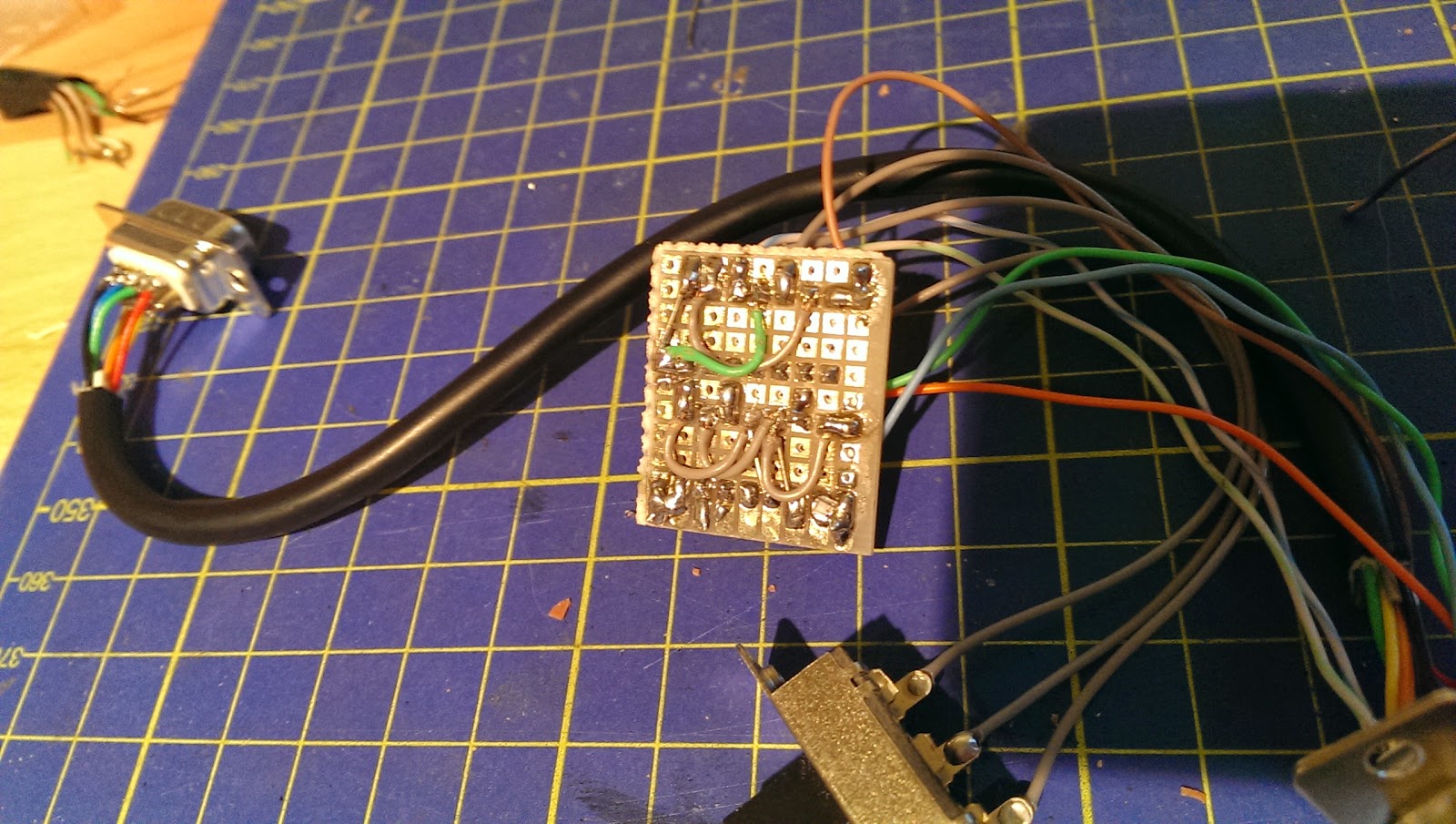 Cue excited running upstairs to plug it into my Dreamcast and check out the kick-ass scanlines!!!.......no scan lines! :-( There was a picture but five wiggly bands of what looked like interference. Darn it!

I looked over the matrix board again and noticed that one of my ground links wasn't hooked up so I bridged that and replaced a resister leg bridge with a small bit of wire. Cue new test and the same result!

I got the images of the SGL progress from mmmonkey's website on the Tablet and got a fresh cuppa to ponder where I'd gone wrong.

I couldn't spot any differences until I went to the start of the article and looked at his original sketch. Could I have the chips in the wrong way round?! Could it be that simple?! I popped out the 74 and the 125 IC's giving myself a mental High Five that I'd had the forward thinking to solder in sockets rather than soldering straight to the chips themselves. If I hadn't it would have been pretty much starting from scratch if I'd have to desolder both the chips to flip them. 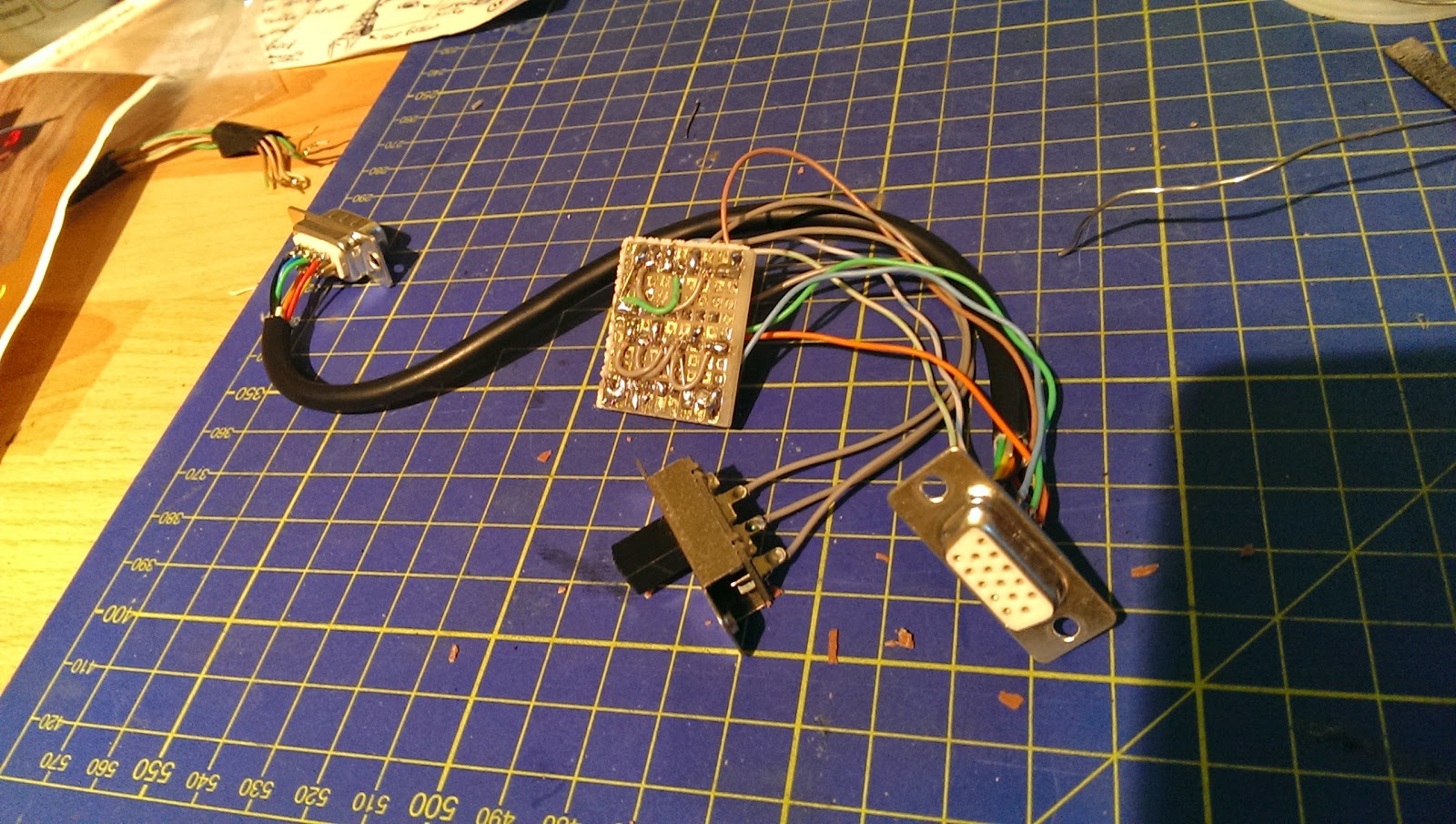 A quick check on the main TV downstairs and whats this?...could it be? SCANLINES!! WOOO! It took a little bit of head scratching but it's worked in the end! 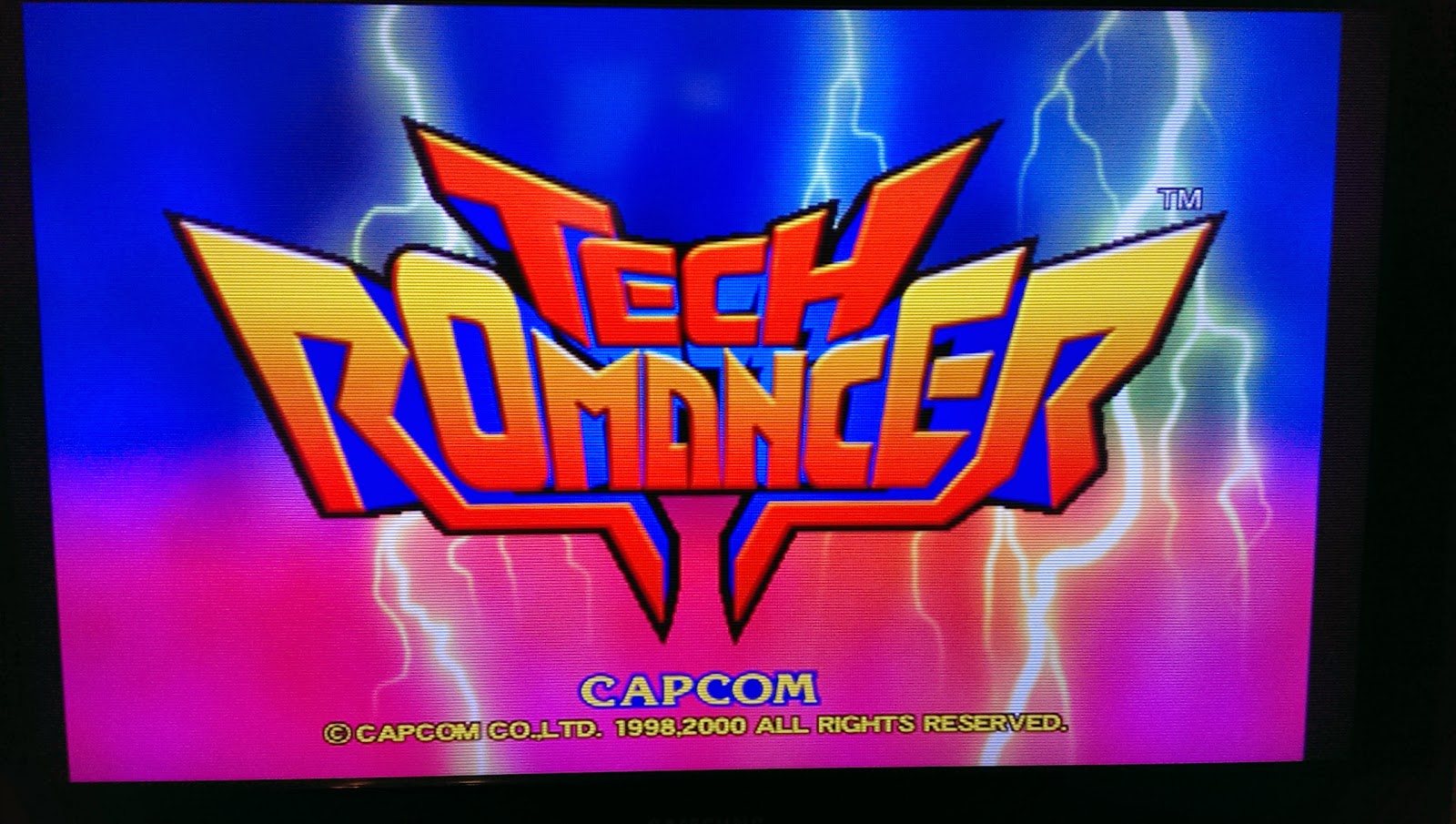 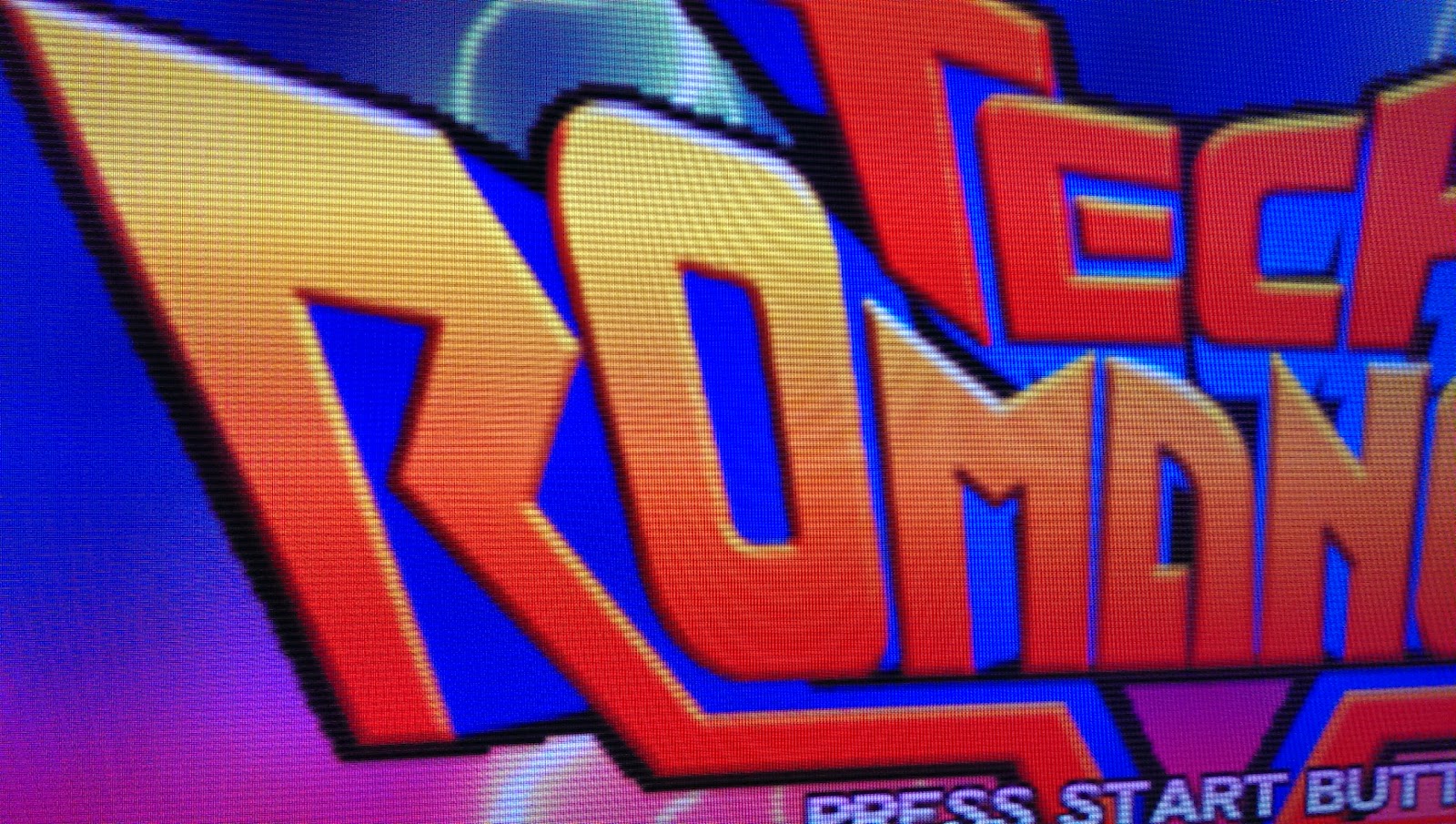 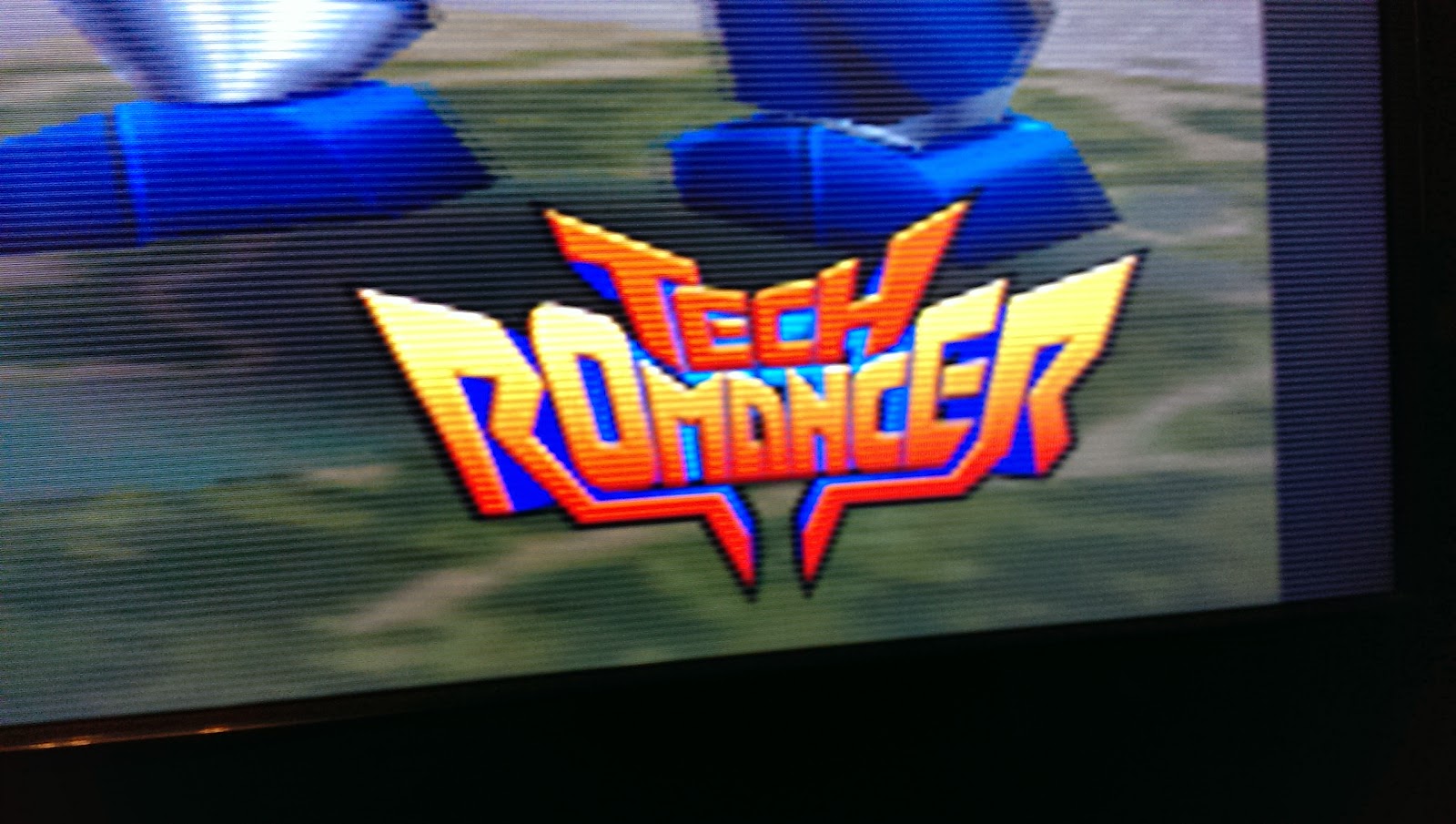 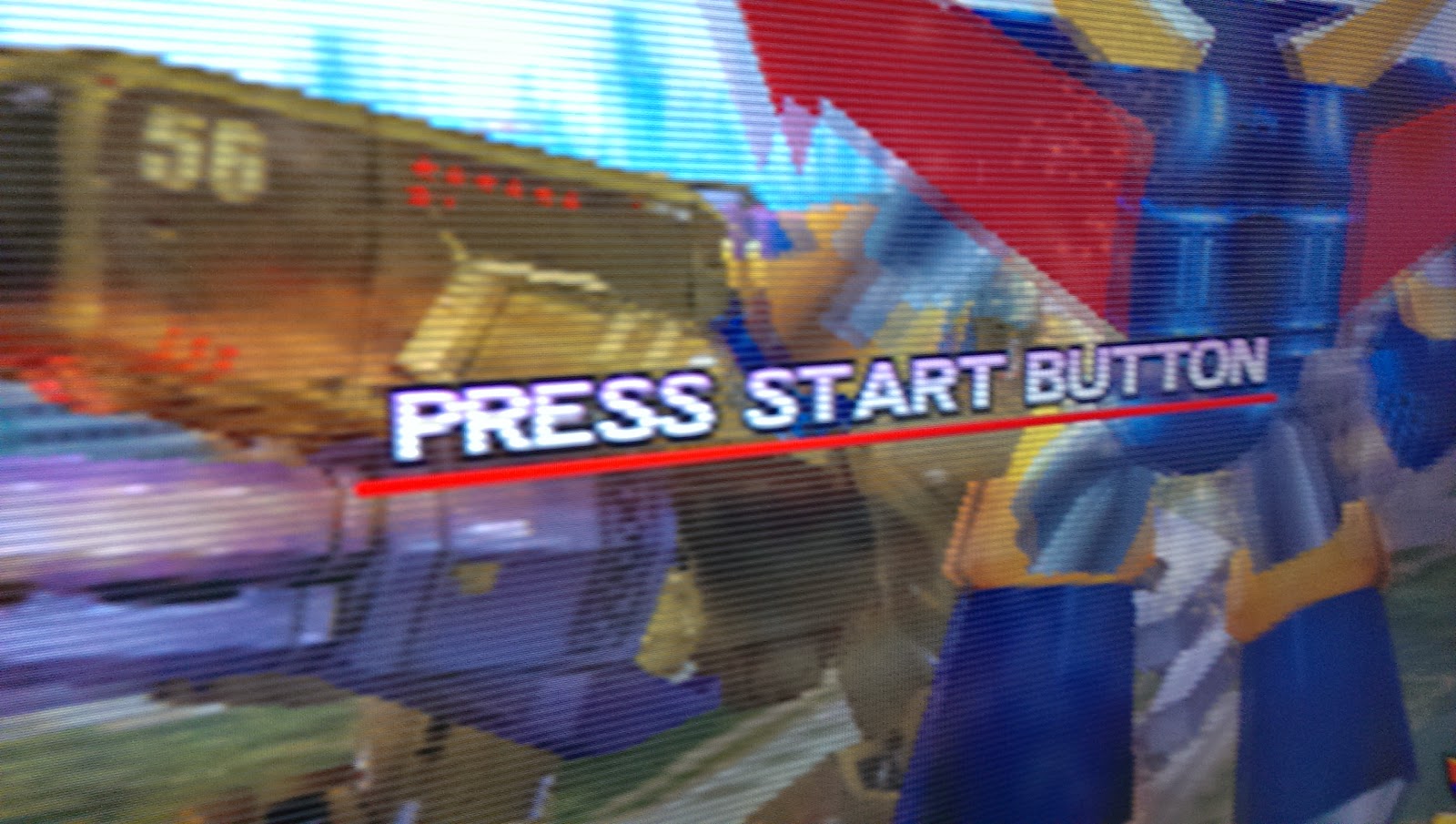 Check those suckers out! That's some retro viewing right there on a modern LCD TV :-D

With the scan lines all working nicely I headed back to the project bench and started finishing off the casing.

And here is the finished result in the project box. I got the VGA cable sitting nicely in between the 2 socketed IC's which will help keep it all snug in its box, even though the hot glue will probably do anyway :-P 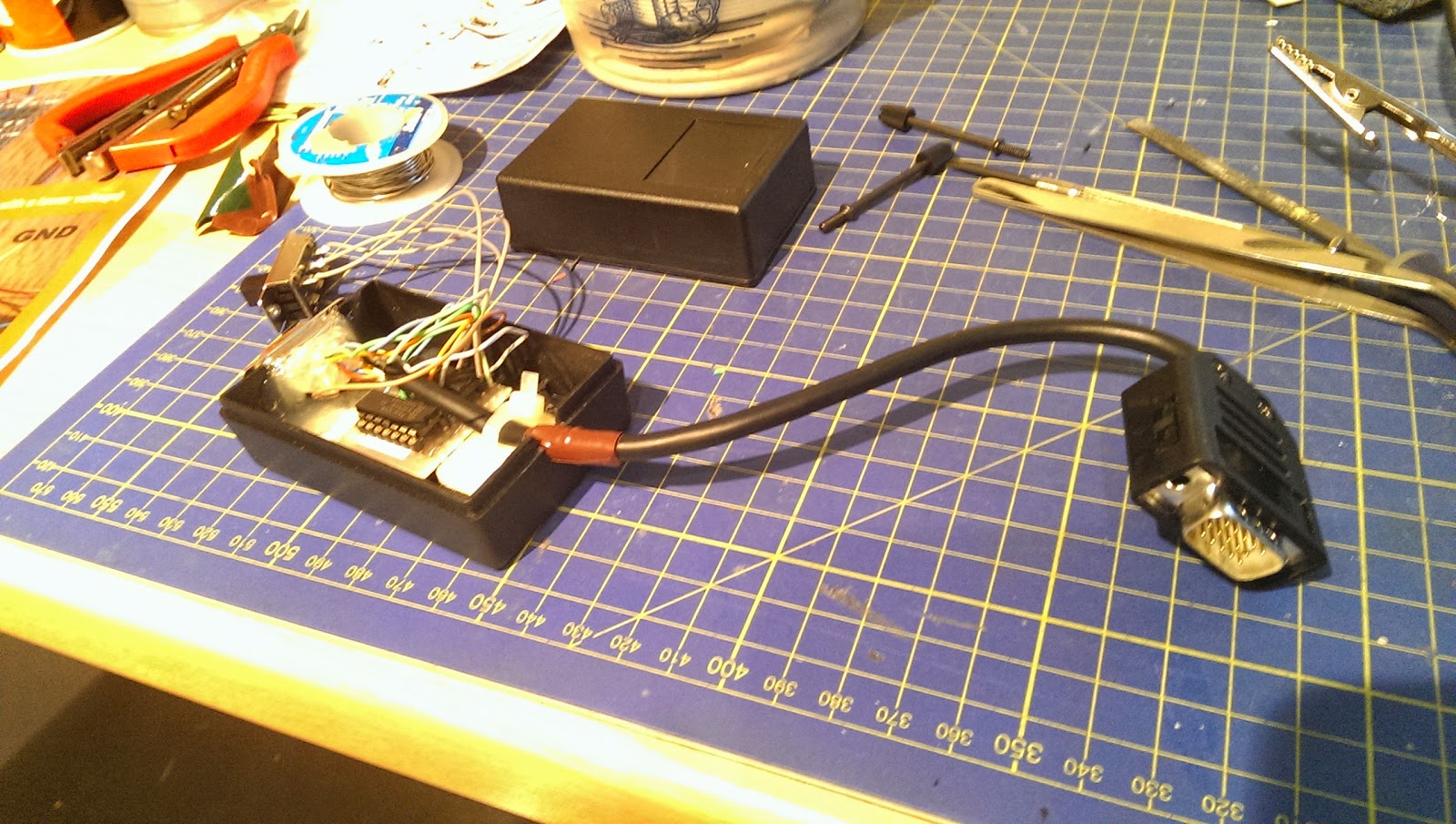 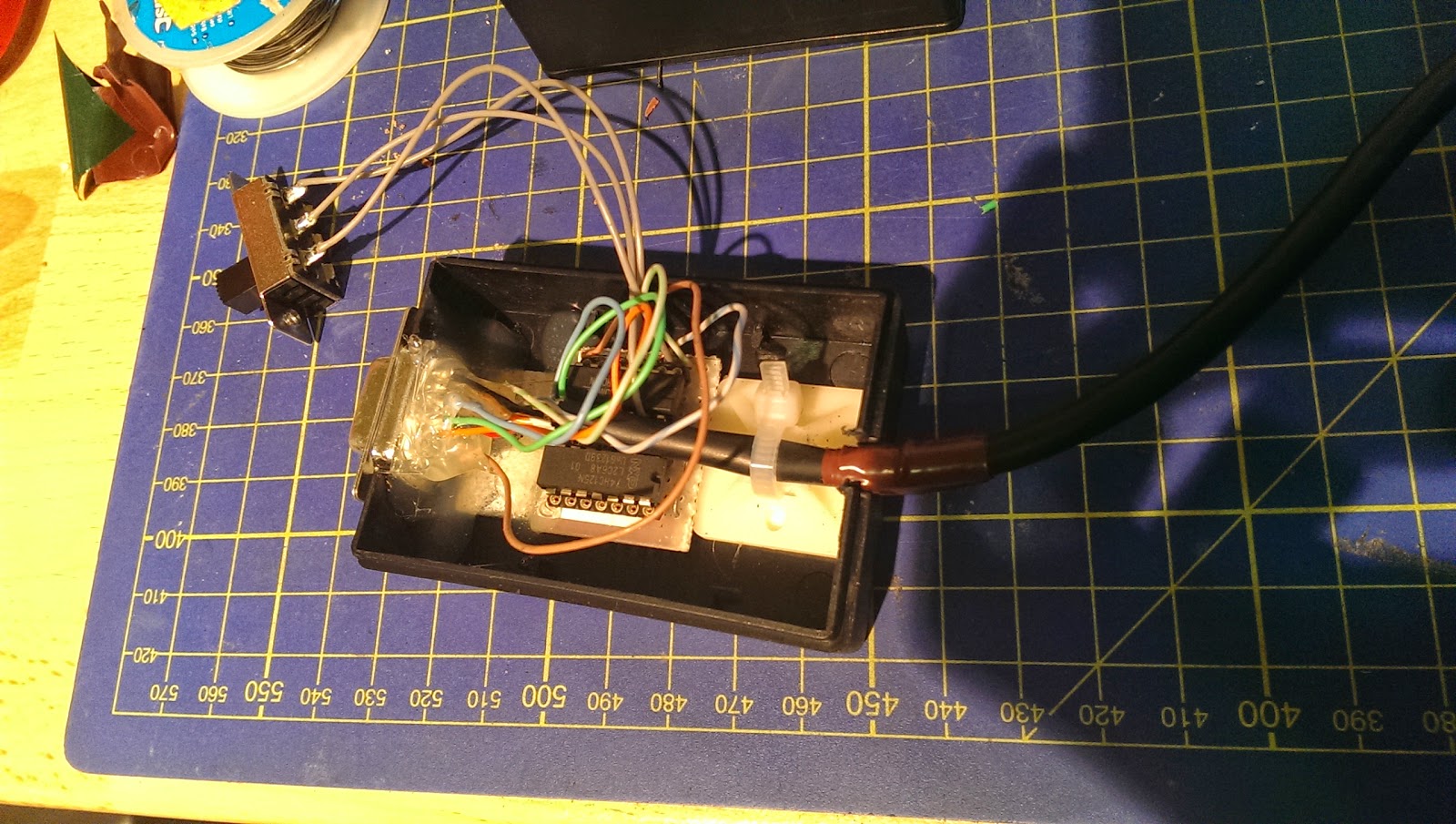 So I tried it on my smaller flat panel tv in my games room and nice scan lines show up.

It seems that my PC monitor isn't compatible with my SGL. Doh! Im not sure why. Could be that I've left a few of the pin's floating rather than grounding them out but I've hot glued it all in place now. Oh well, it was only a mid-week project and it works properly on my TV's :-D So when I fancy some Dreamcast on the big TV I can have nice old-school scan lines running on there.

I have enough IC's etc to make another SGL if I fancy it at some point and I'll ground out the floating pins and add in another switch to alter the width of the scan lines. I went with the basic version to start with to see if it would work or not.

Im really pleased with the result in the end, even though it doesn't work on my PC monitor. Its a shame but not the end of the world. :-) 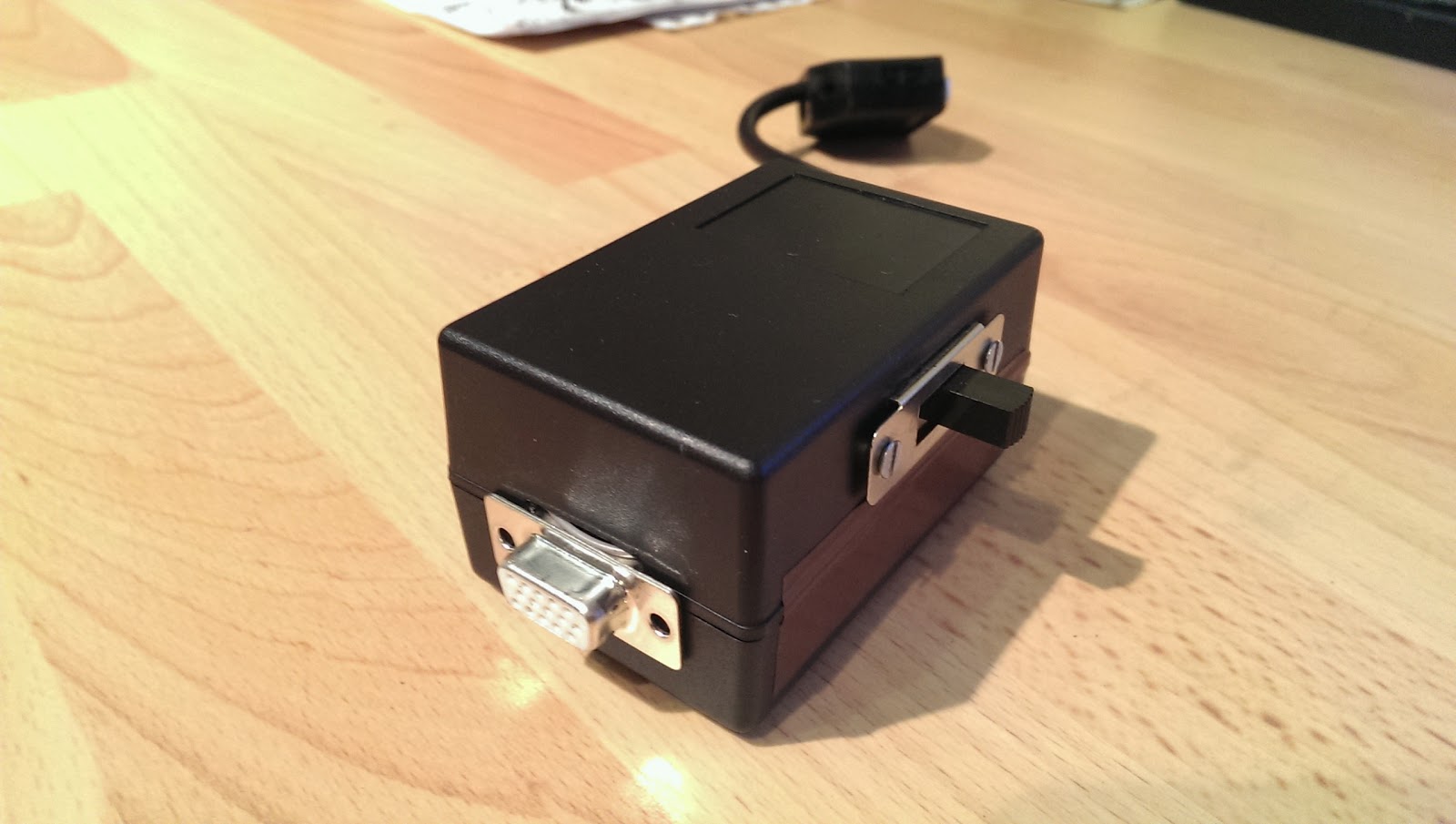 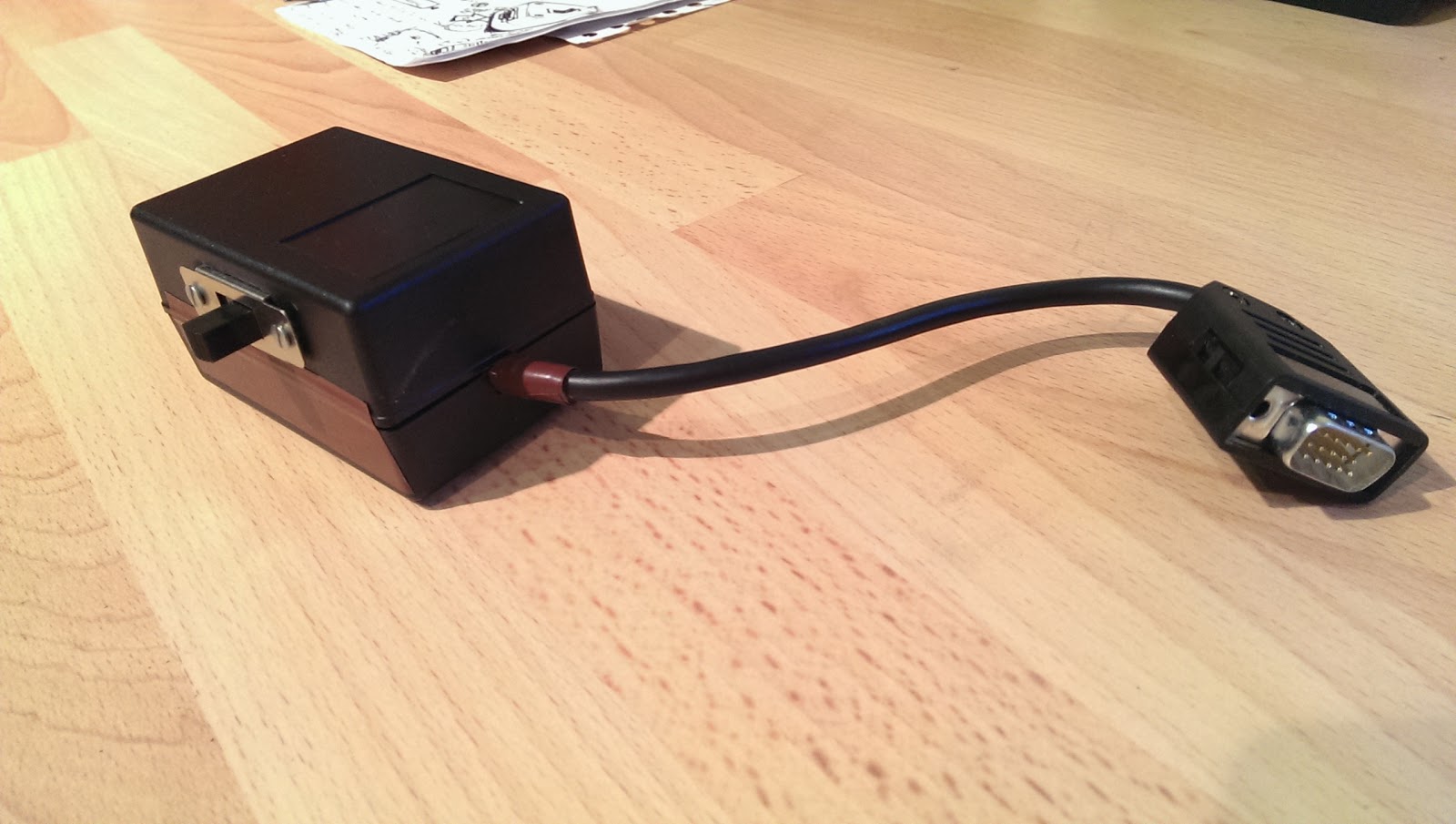 Looks pretty neat all finished. If you want some retro scan lines on your VGA modded dreamcast then I recommend checking out mmmonkey's guide. Its a nice cheap and pretty quick project to get some retro goodness on your TV.

Just a quick last minute photo. It turned out not too dissimilar to my drawing I made during the week :-) I was trying to figure out how the video signal would run and which way it would face inbetween the monitor / TV and Dreamcast. 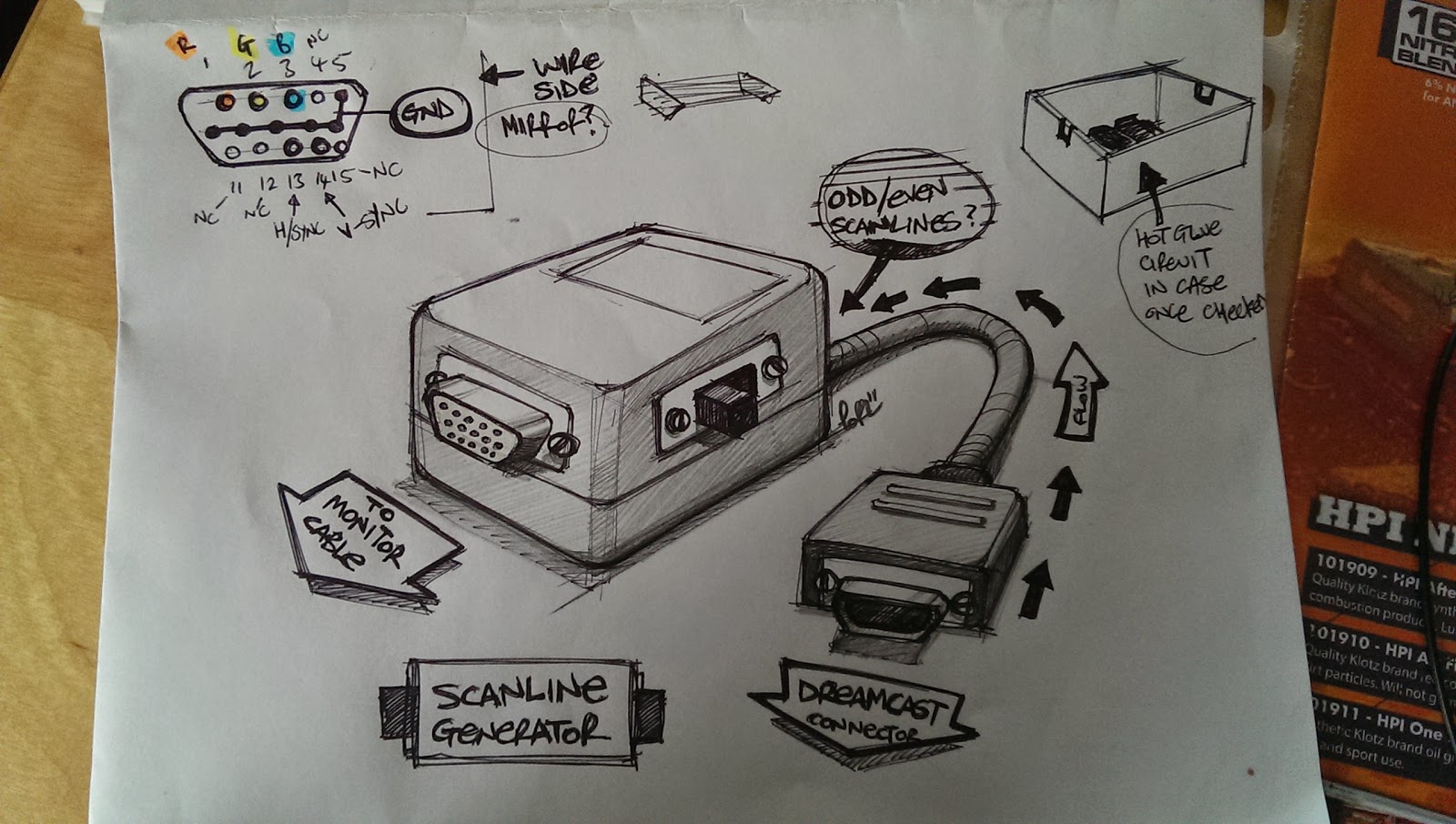 Catch you all later for the next project update.