I've made some more progress on "the Machine" this friday afternoon and it's starting to get there now :-D

The aim for the control panel was to get 6 buttons for each player so that I can play my Street Fighter games on there no problem. So I set about drawing out the positions for the new buttons on the control panel so that I could figure out if they would all fit. What I've found is Player One's part of the panel had more than enough room around the existing 3 buttons to get the others to fit. But Player Two's area is really cramped. It's like they ran out of room as they worked along from left to right. So between the 3rd button and the cigarette area is rather cramped. So this part of the panel is going to have to be a bit of a compromise.

Last weekend I'd tried to make a start on the control panel and thought that I would be able to drill out the hole like a little pepper pot with the largest metal drill that I had and then cut out the linking bits of metal with my Dremel. Well let me tell you, that isn't the way to go about drilling the holes out of a metal control panel. To get the one hole done it took me an hour and a half and I went through 2 grinding wheels on my Dremel. This way would take me forever and I would be buying new grinding tools every other button hole.

So I left it there last weekend and during the week I picked up a Holesaw along with the corresponding drill bit from Wickes and set about the control panel again. What a change using the proper tools makes! The holesaw made short work of the control panel and I breezed through this time. 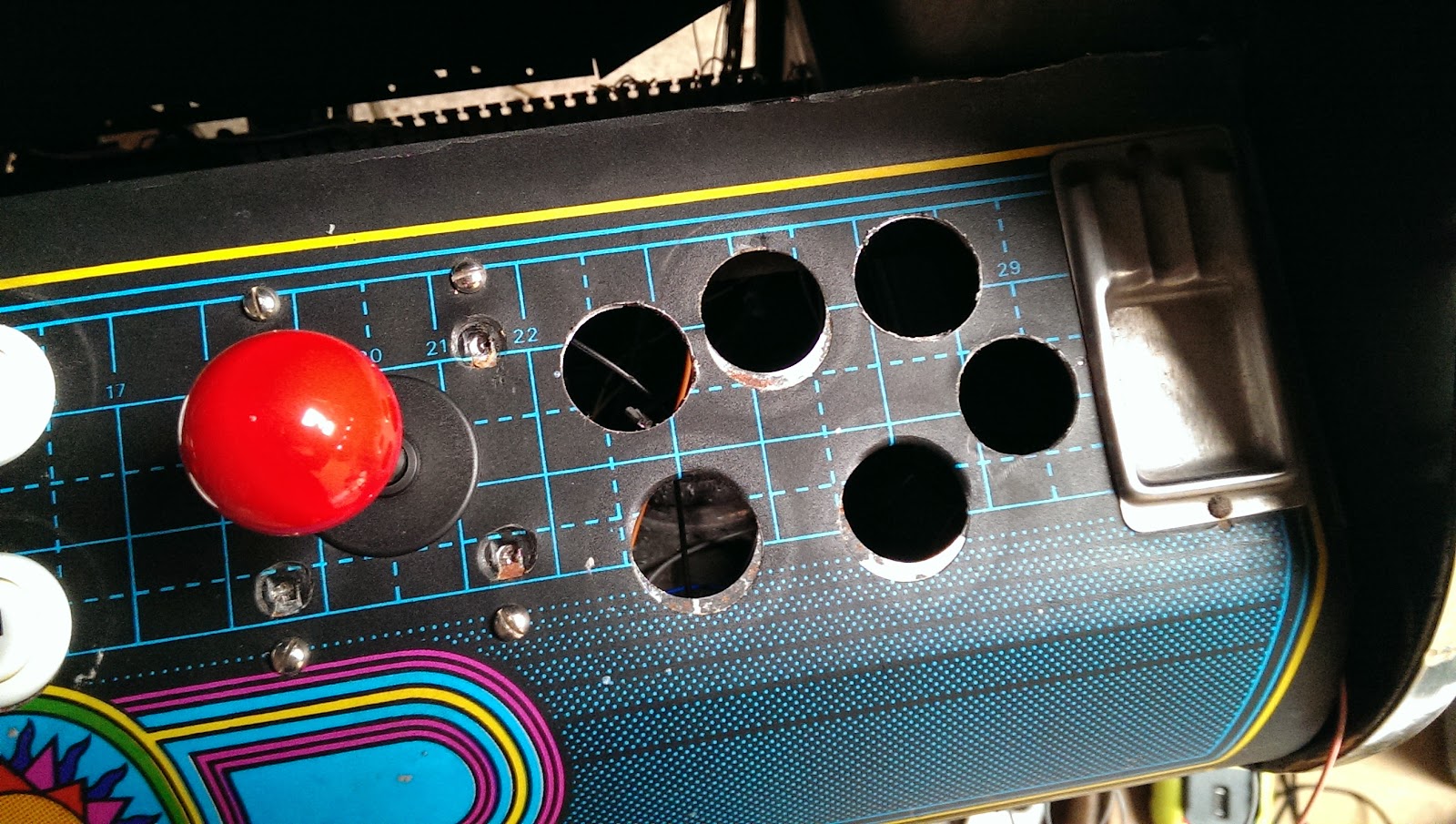 Here is the second player's control area. You can see that button 6 has had to be squashed up to get it to fit. And I've had to fit the extra buttons a little closer to the original holes because of available space. It doesn't feel too tight to use. 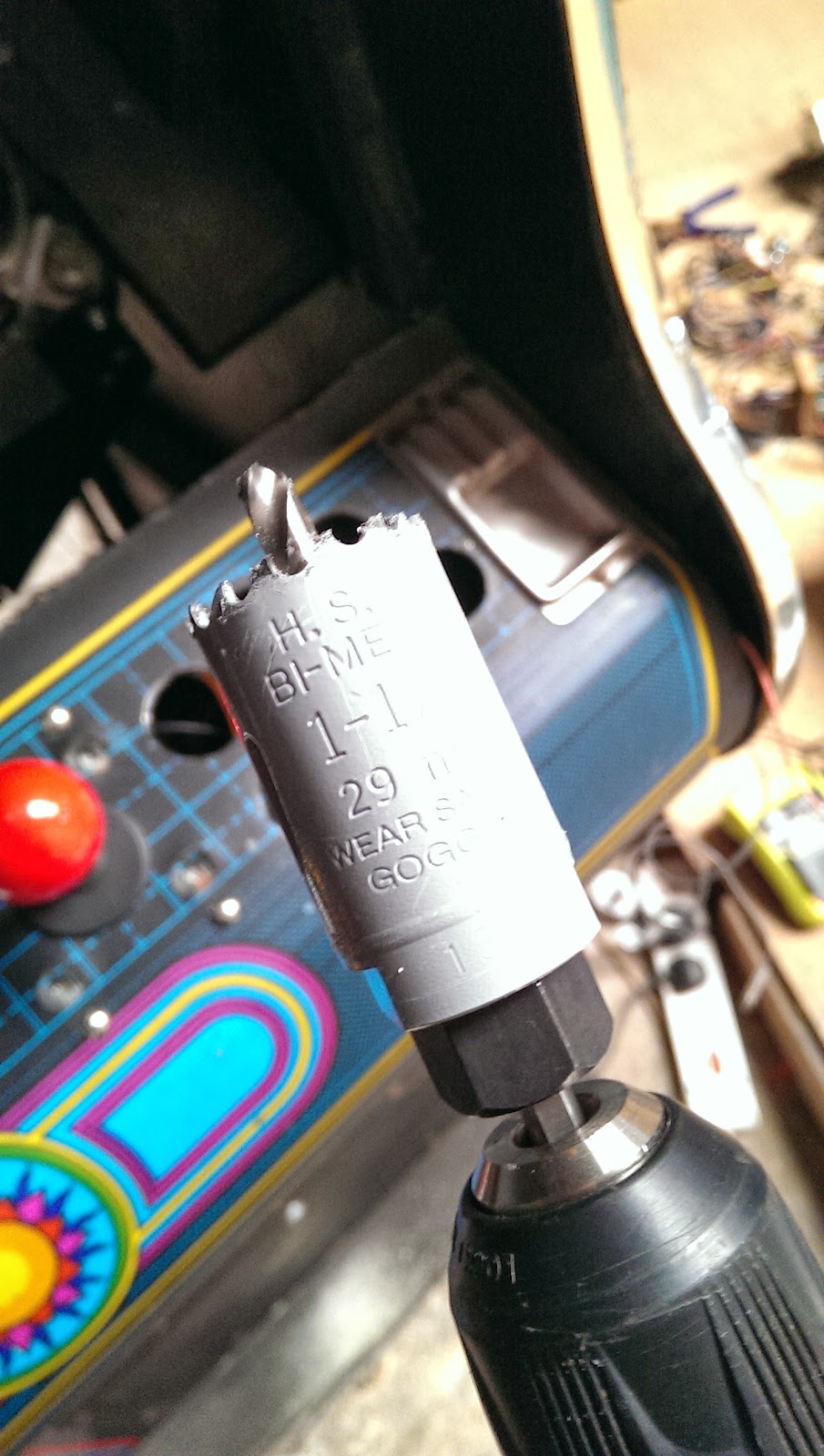 Here you can see the holesaw I used. Its a 29mm holesaw and the buttons fit perfectly into the space you drilled. I thought it might make holes that are a little too big but they are spot on.

One thing to remember though is take out the existing buttons when you start to do your drilling. I didn't do this and buggered up one of my buttons. :-( The holesaw generates lots and lots of really little metal flakes and they can go down the litte gaps around the buttons and jam them up a treat! Because the plastic is quite soft the metal seems to dig in really well and it doesn't feel like it will come un-stuck.

So I'm going to have to order another one to replace the stuck one.

Below you can see the backside of the control panel all wired up. It looks a little bit of a mess but it's as neat as I can get. I can't pull the harness wiring through any further because its pulling the jamma edge up too high for my smaller game PCB's to sit on the bottom of the machine. 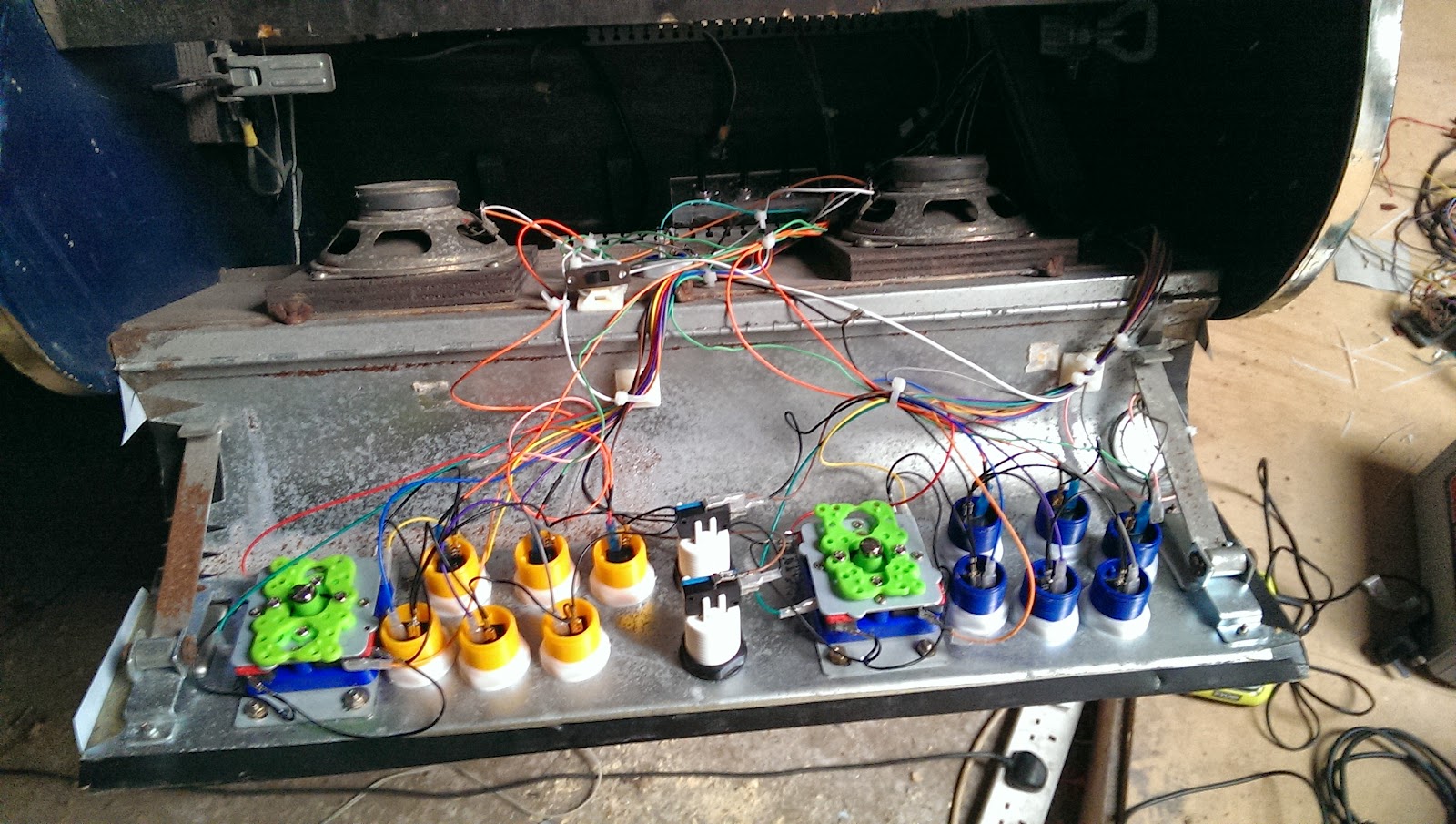 You can see that Player One's buttons are laid out more traditionally than Player Two. The spacing is still not exactly how you would normally have it if you were to make the control panel from scratch. But its nice enough I think.

Once I'd gotten all the buttons wired in and tested I started working on a little idea I'd had during the week. One thing I found out from making my first arcade stick for my Super Gun was that if you make an arcade stick that is just 6 buttons you won't be able to play Neo Geo MVS games that require 4 buttons. This sounds a little daft but when you make a 6 button stick for CPS2 Street Fighter games your top row consist of A, B and C from the Jamma harness. And the bottom row are Light Kick, Medium Kick and Heavy Kick which come straight from the CPS2 kick harness. Neo Geo MVS uses button D from the Jamma Harness. So when I made my second arcade stick I made it have 7 buttons so that it had D on there as well.

The problem with the arcade machine is that the control panel has very limited space but I still wanted to be able to play Neo Geo MVS games on it. So I decided to see if I could wire up a switch so that I could convert button 6 to either by Heavy Kick or Neo Geo Button D.

Here you can see the Conversion Switch held in place via Cable ties mounted on my new bases. 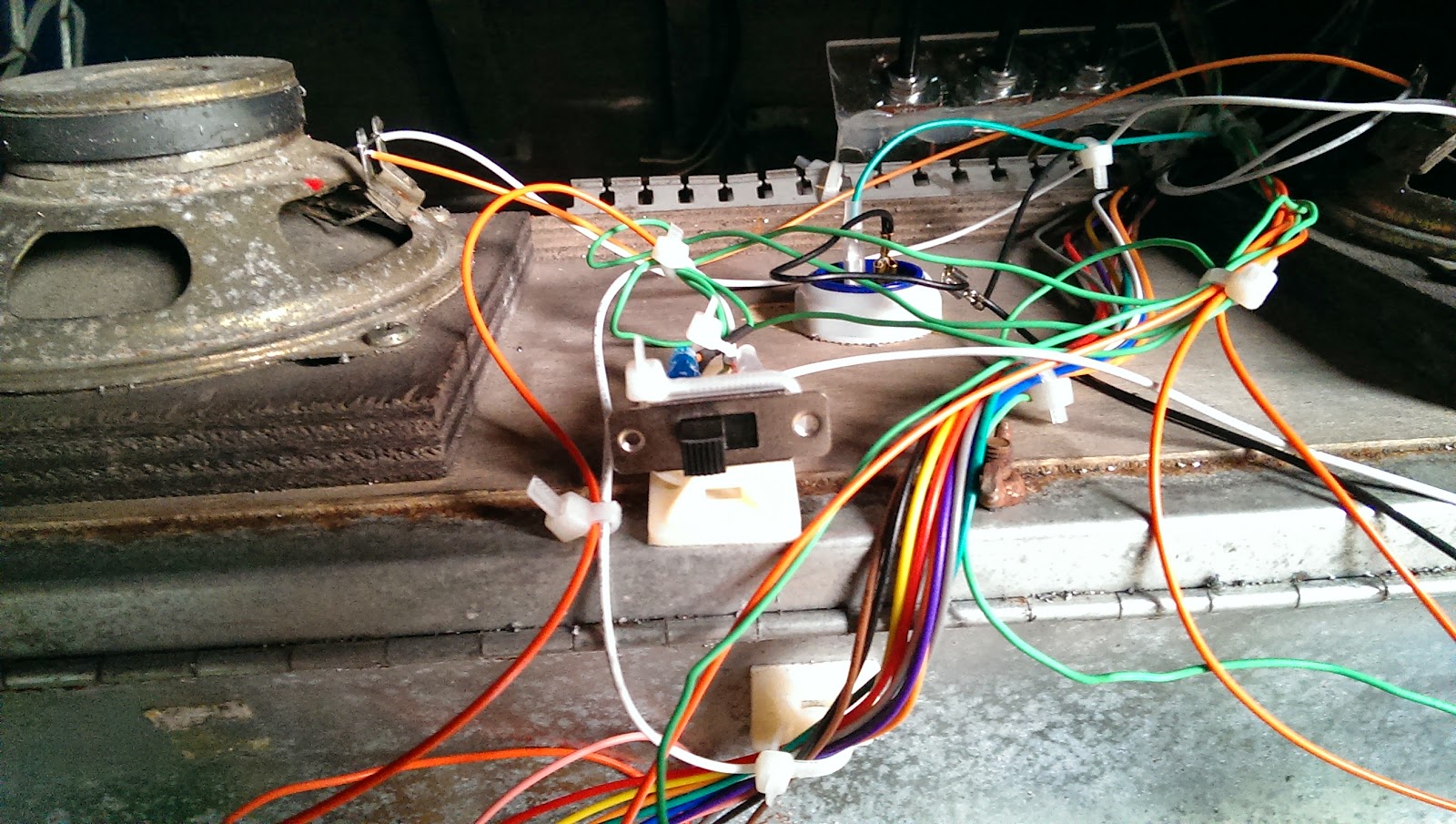 The center of the Double Pole Double Throw switch leads to button 6. The left hand tab comes straight from the kick harness and the right hand tab comes from button D on the jamma harness. So if you flick the switch over to the left your hooked up for CPS2 games, and if you flick it to the right you have button D for Neo Geo games. :-D Im really pleased that such a simple switch works a treat! Probably very simple to most people that mess about with electronics or wiring stuff up but being new to this I was quite proud that it worked. woop! 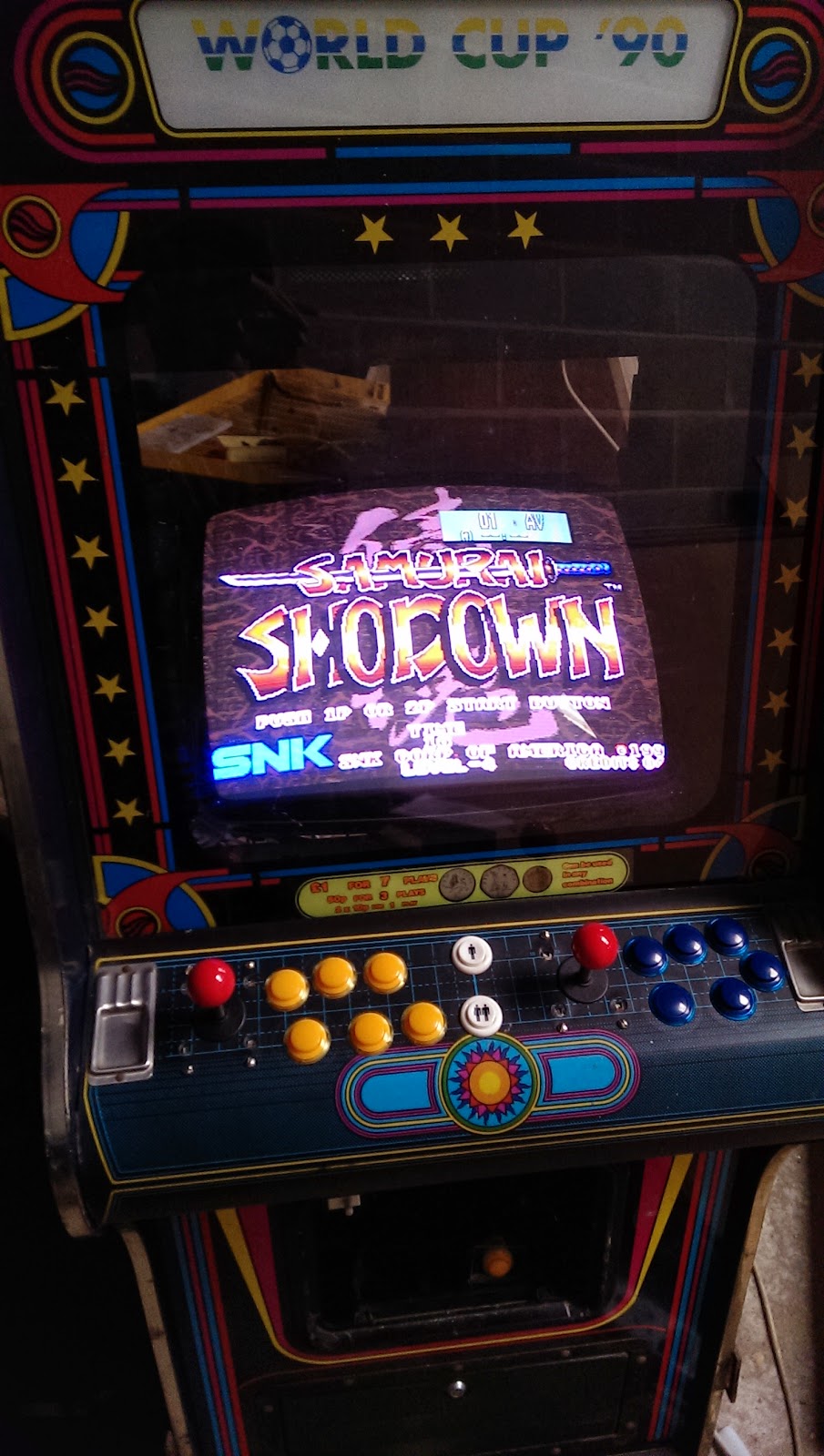 Here you can see the finished control panel all working with the glass window in place. I've got Samurai Shodown running in the machine using my Neo Geo MVS 1F board. 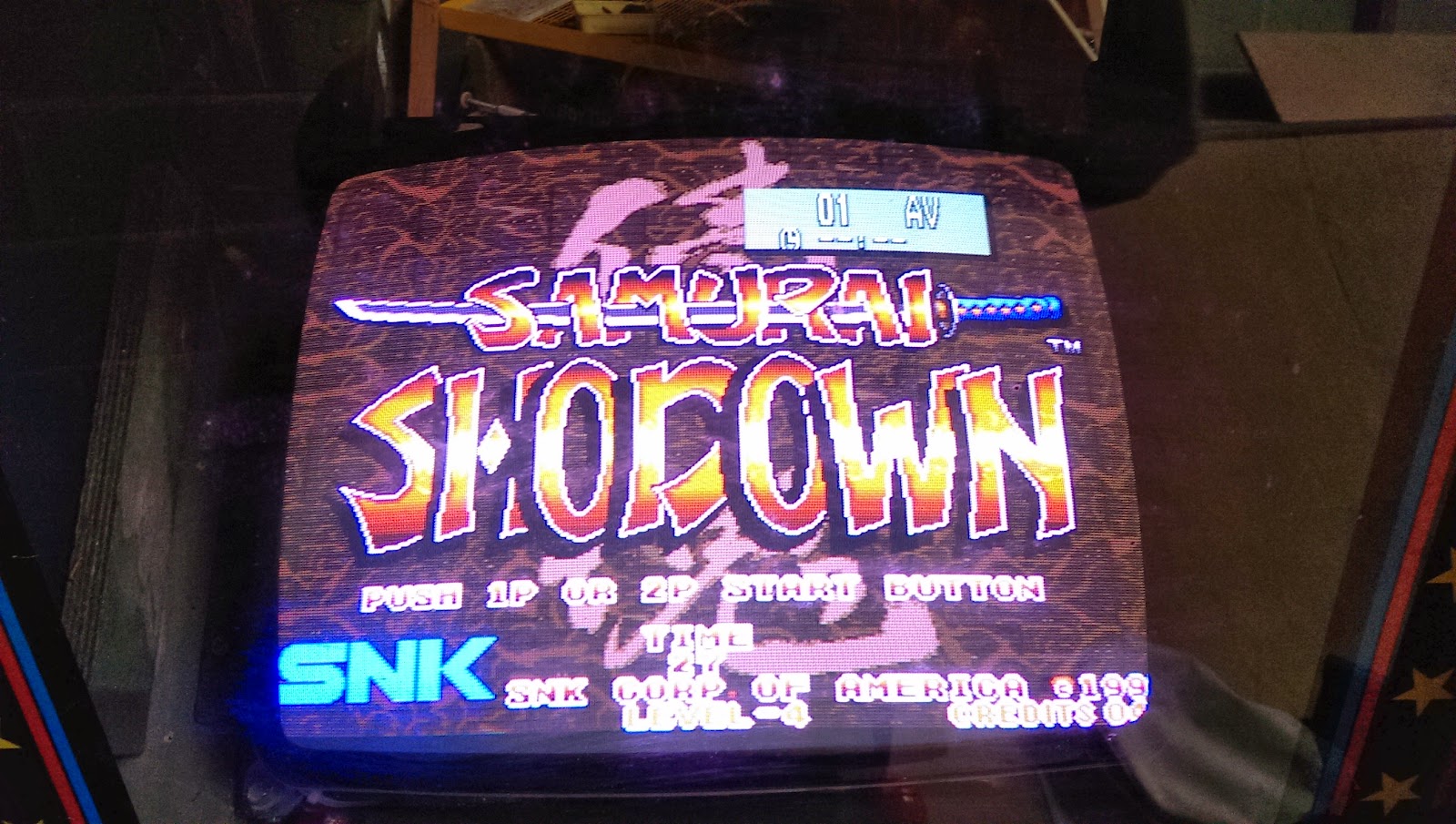 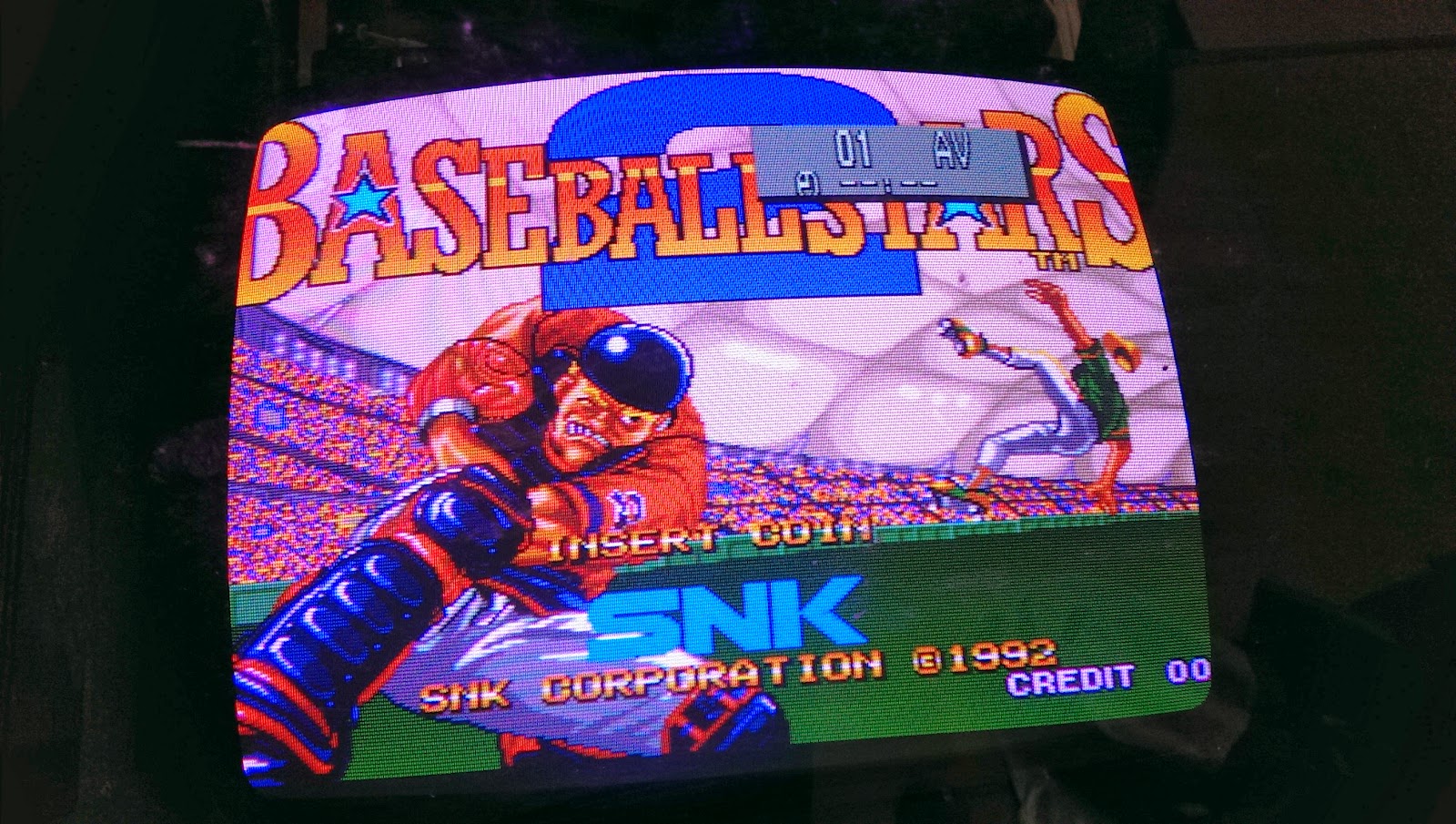 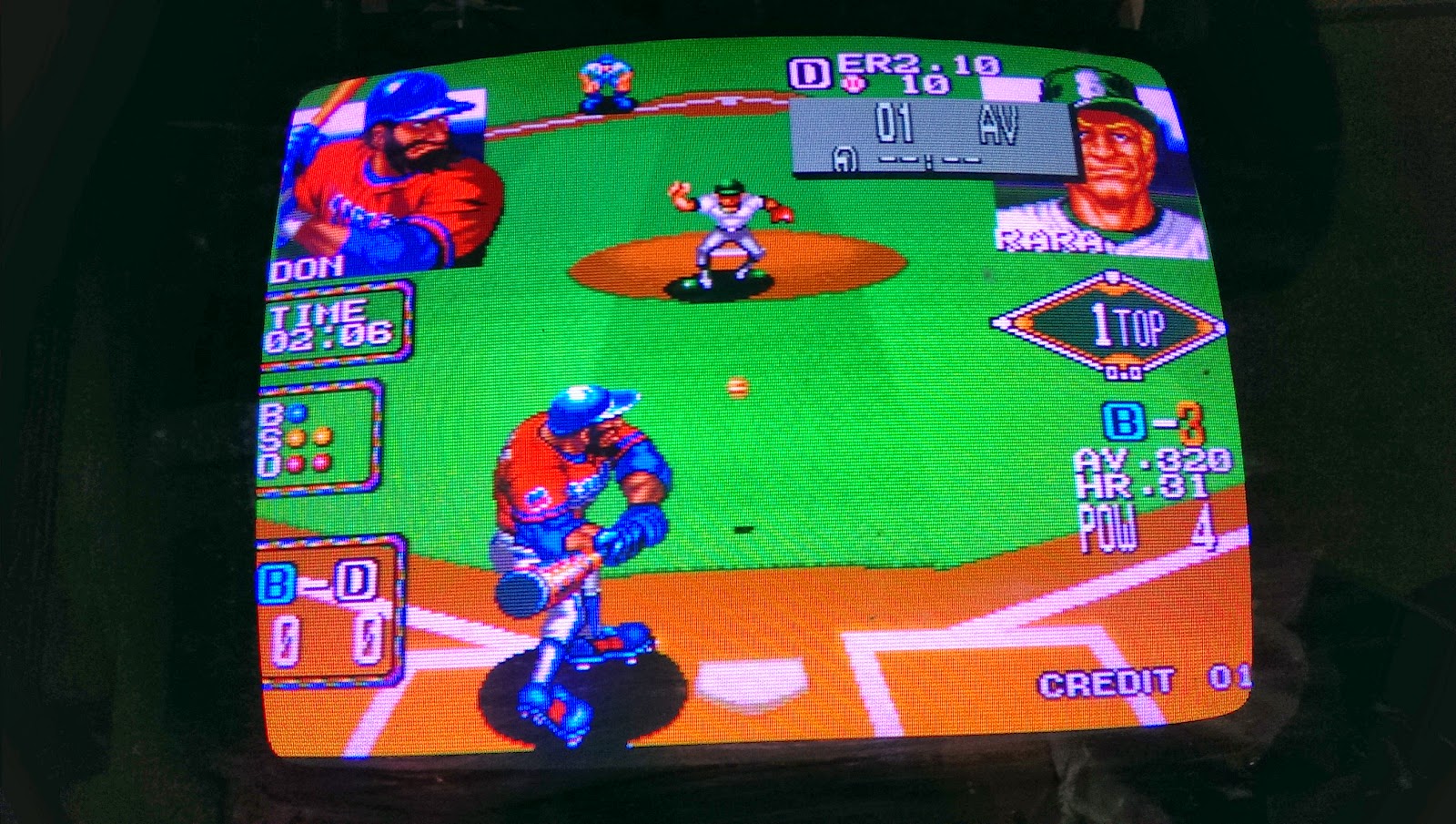 For some reason when the Neo Geo is running in the machine the TV is keeping the channel panel up in the top right corner of the screen. Im a little unsure why its doing this as it doesn't do it on normal Jamma games. I'm pretty confident that when I get hold of the remote for the TV I can get that to turn off though so it's not obscuring so much of the screen. 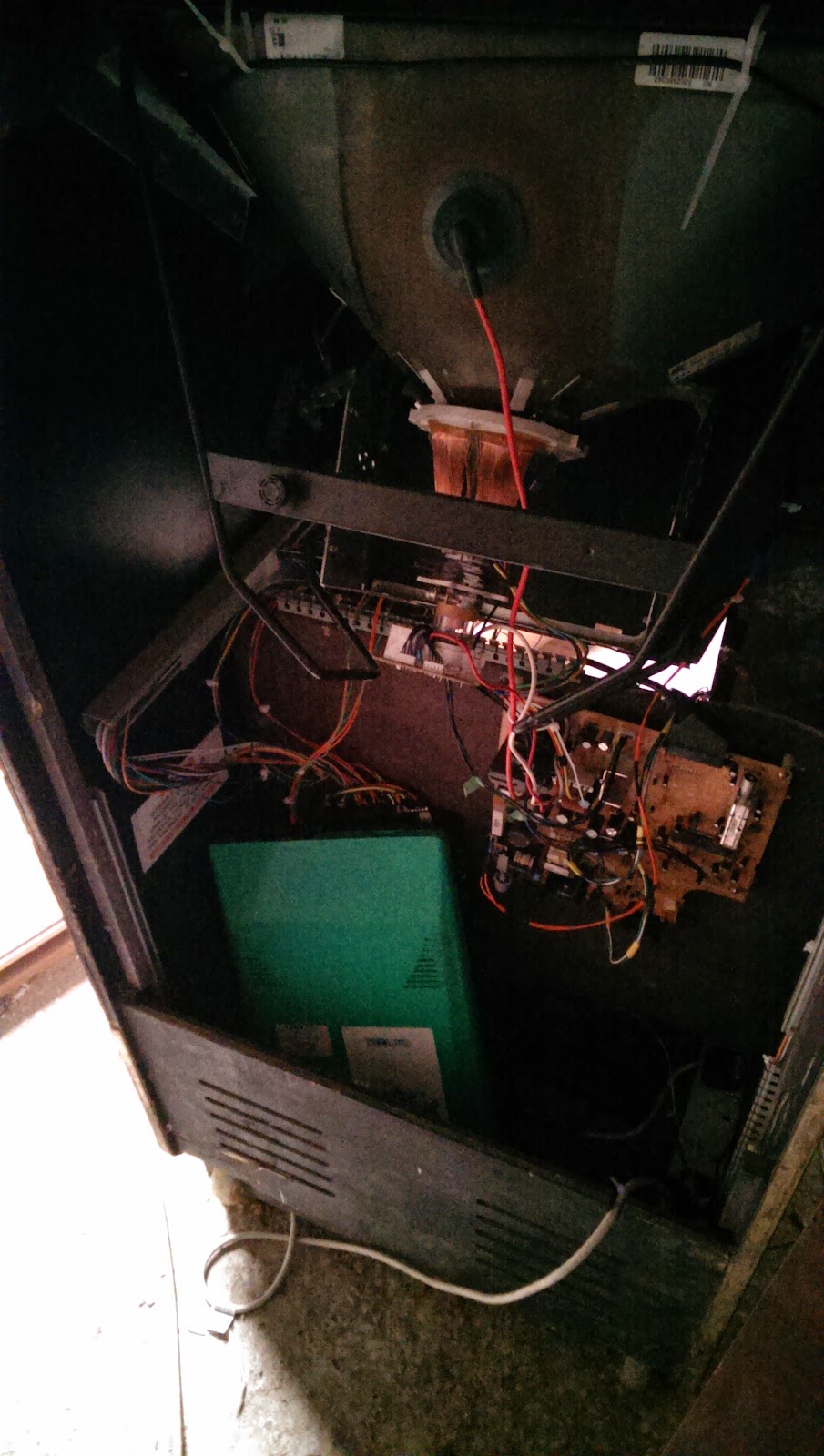 
So what's next for the machine? Im going to be cleaning up the glass window and trying to get the marquee light working. Tidy up the coin door a little bit and remount it to the front of the coin door area. Sort out the back panel of the machine. Repaint it or something as birds have been pooping on it a bit. Ugh!

Catch you on the next update :-)