My main aim for the weekends work was to try and figure out the marquee light and try to get that hooked up and working. I must admit though I hadn't got a clue how the thing hooked up to the power supply as it was just 2 wires and they weren't standard colourings to the wires. Hmm, surely one has to be ground and one live? There's a sticker on what looks like the ignitor? power block for the light that says 240v so I thought 'brilliant! I'll hook it up to a mains plug and see what happens'. Well, what happened was the bulb got really bright then a burning spot appeared at a part of the bulb and it switched off. Doh!! Burnt it out and my confidence with getting that thing working dropped through the floor.

I could try to get another bulb to fit but I might struggle and then it could just burn out like this one did because its not wired correctly, so I decided to head down to my local B&Q diy store and pick up some tree ties for Roz and her mom and picked up a small strip light while I was at it. While I was there I checked over all the lights and checked that the one I got was mains powered so I could just hook it up and I'd be away.

I had a good long piece of mains cabling and scrounged a plug and hooked up the light to check that it fired up and worked okay. And, bingo! It worked! Next step is to get it mounted to the marquee board and check again. Here you can see it mounted to the board before I routed the wiring down the back trunking of the machine and down to the power strip thats sitting in the base. 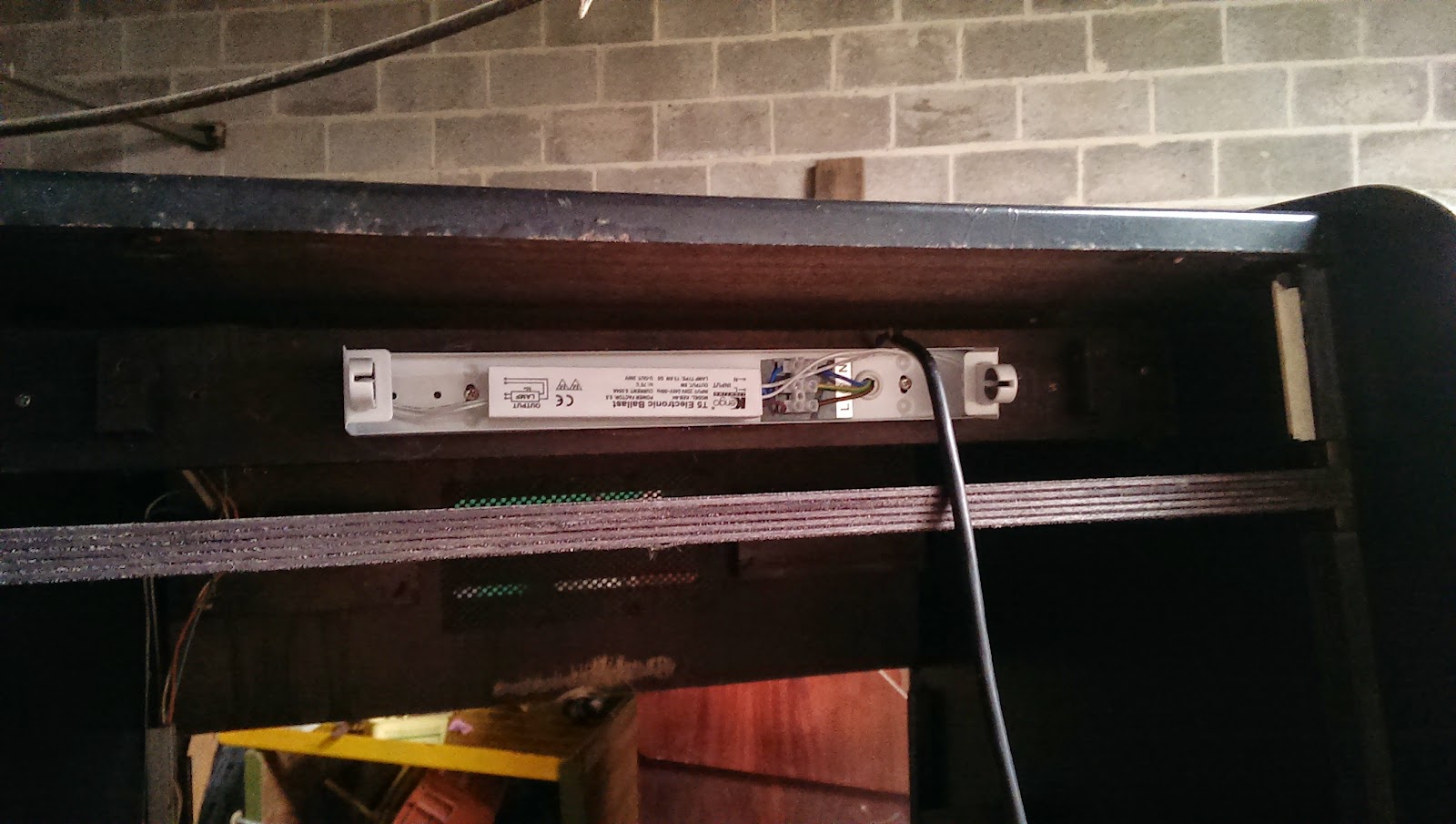 After I got it all cable tied to place and hidden in the trunking I go it switched on in its new home. :D 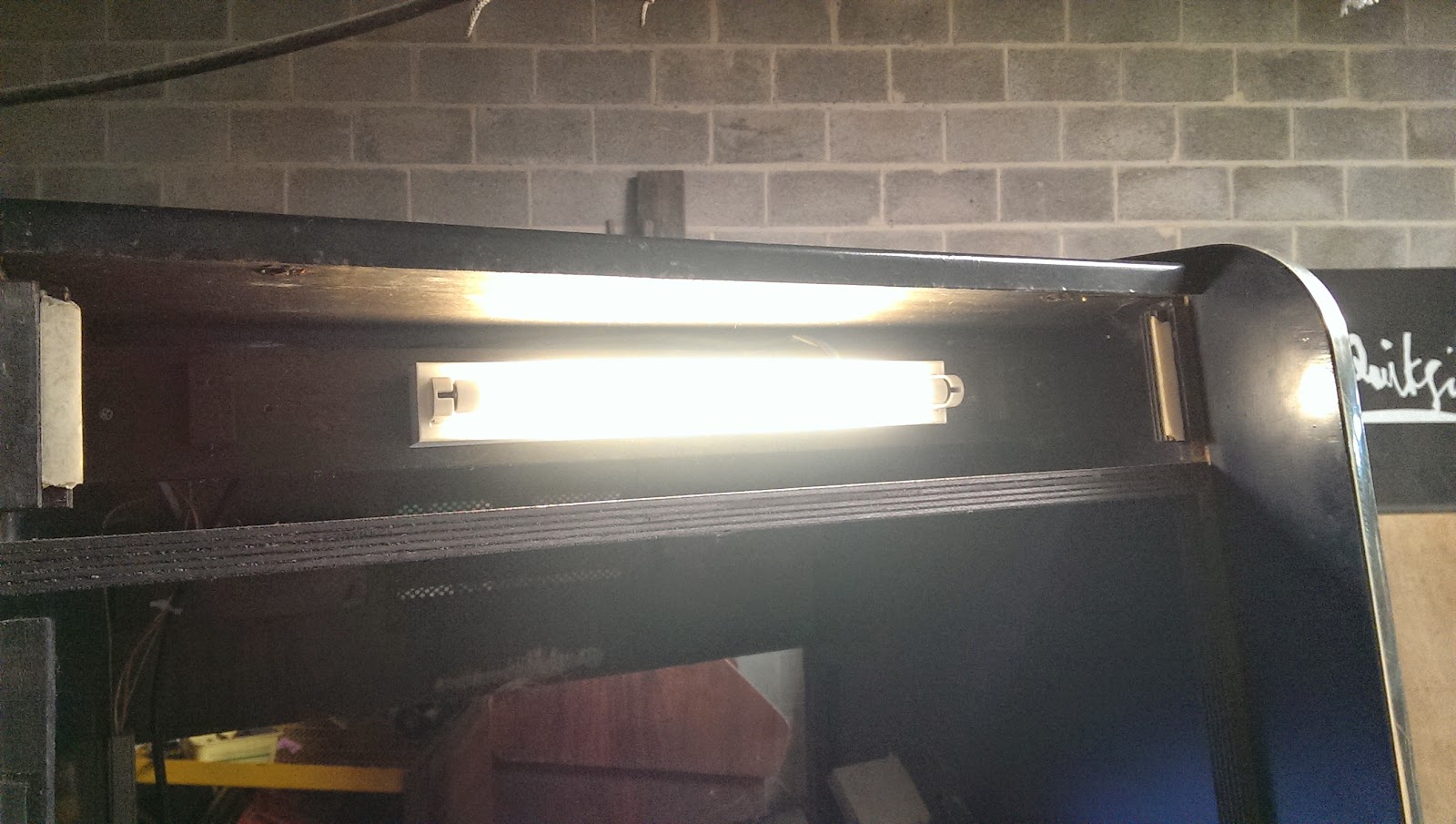 Check that glow! haha. Another tick on my list of things to do there. Marquee light, done!

Here's how the machine looks at the minute with the glass and marquee sign all back in place. 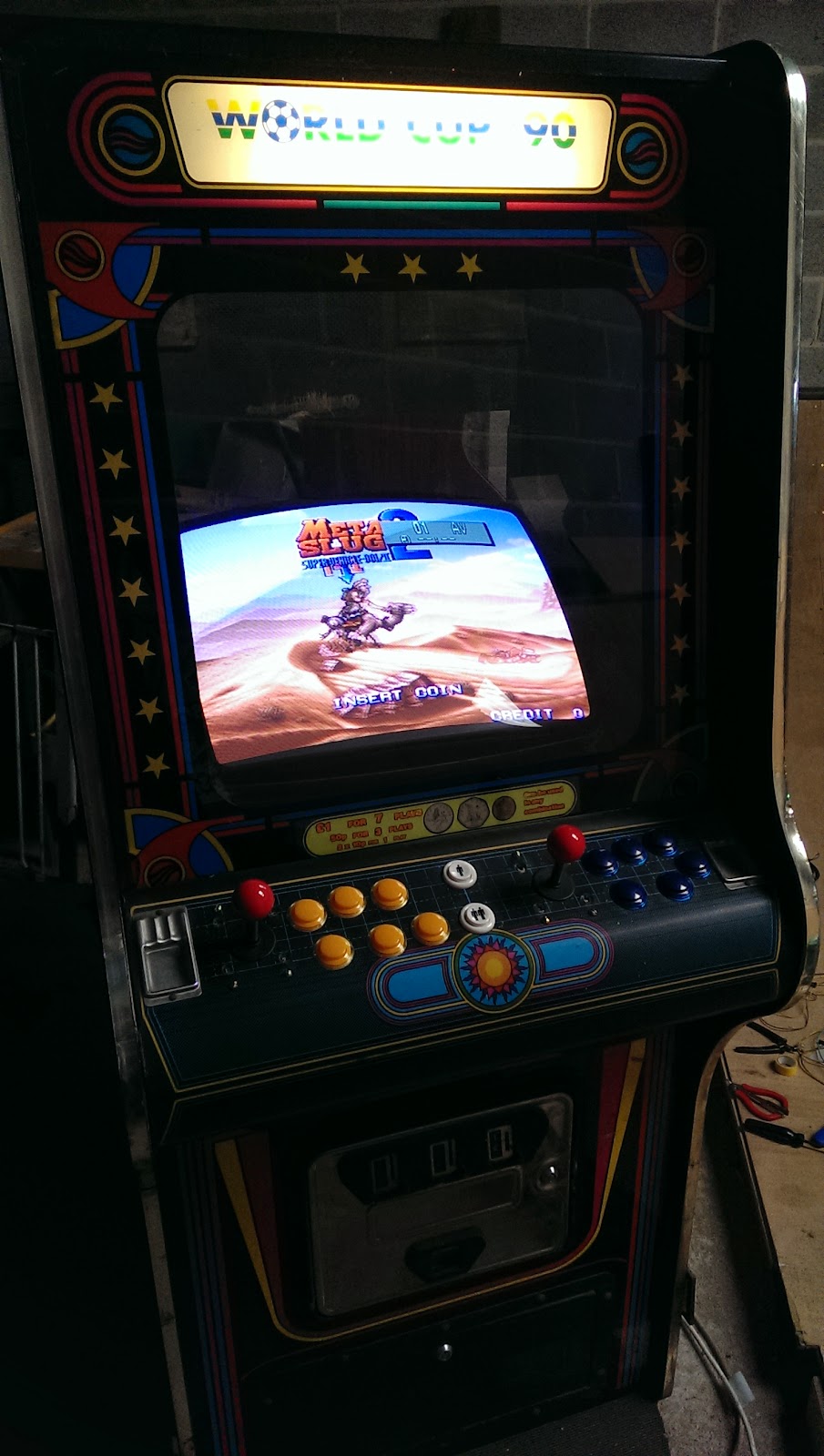 Looking pretty snazzy I think. I don't know what it is but when the light turned on it just clicked to me. This is finally an arcade machine, it just feels more right.

During the week I'd received some new Neo Geo MVS games so I thought I'd bring one of the cartridges with me to 'test' out in the cabinet. Metal Slug 2! :D

Its crazy how different the game looks compared to my little LCD TV I've got at home. Standing up close to the CRT monitor with the scan lines etc makes it feel a lot more proper.

I got a nice little stash of games and I'm really itching to complete them all but the one thing I'm making sure I don't do is credit my way through them. I.e. just pressing the credit button continuously to force my way through the games. One thing I've been doing with Metal Slug 2 is giving myself 3 credits and 3 credits only. Trying to recreate only having so much change in my pocket like when I was a kid. Man, is Metal Slug 2 a hard game though!! I can only get to the end of level 3 so far with my 3 credits. Its crazy tough even on level 4 difficulty settings. I'll get there though. 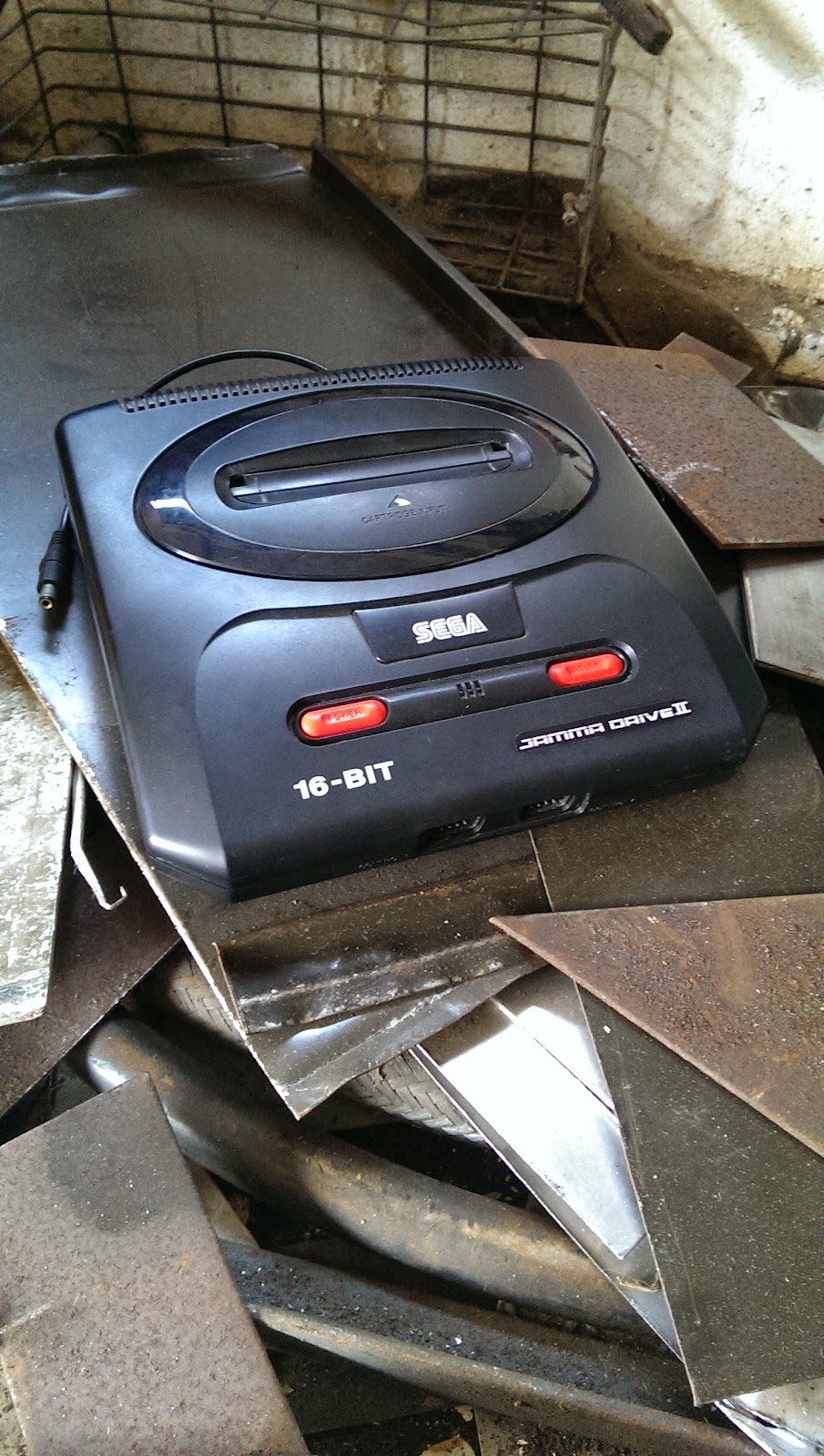 So that was Saturday's work and I thought I would be all done for the weekend but we headed back on the Sunday so Roz could help her mom out with some more tree's so I had an idea of what I could leave in the machine semi-perminantly as I don't want to be leaving my 'real' arcade boards in the machine when it's not at my house yet.

So I used the time in the morning at home to source out an old Megadrive / Mega CD base plate from my wardrobe to see if I could modify it into a PCB stand for my Sega Jammadrive 2 :-)

I found the base plate out but quickly found out that its not going to fit the Jammadrive 2 unless I take the rubber feet off the bottom of the casing (not gonna happen as I want it to look stock :P ) or modify the plate. So I got my metal saw out and started hacking away at the base. I got a little way but needed some proper equipment so I took it to the farm and used the saws there.

Here you can see the Jammadrive 2 next to where I was working so I could keep offering up the plate to it to see how it was fitting.

Right, a little disclaimer...I'm not going to show the finished off plate because its VERY embarrassing and looks like a torture device from Vlad the Impaler (and it actually did impale me at one point and cut my hand doh!) but it does fit nicely and work very well. I drilled out some holes and mounted PCB feet that I had spare so that I could then screw that into the internal wooden wall of the arcade machine. 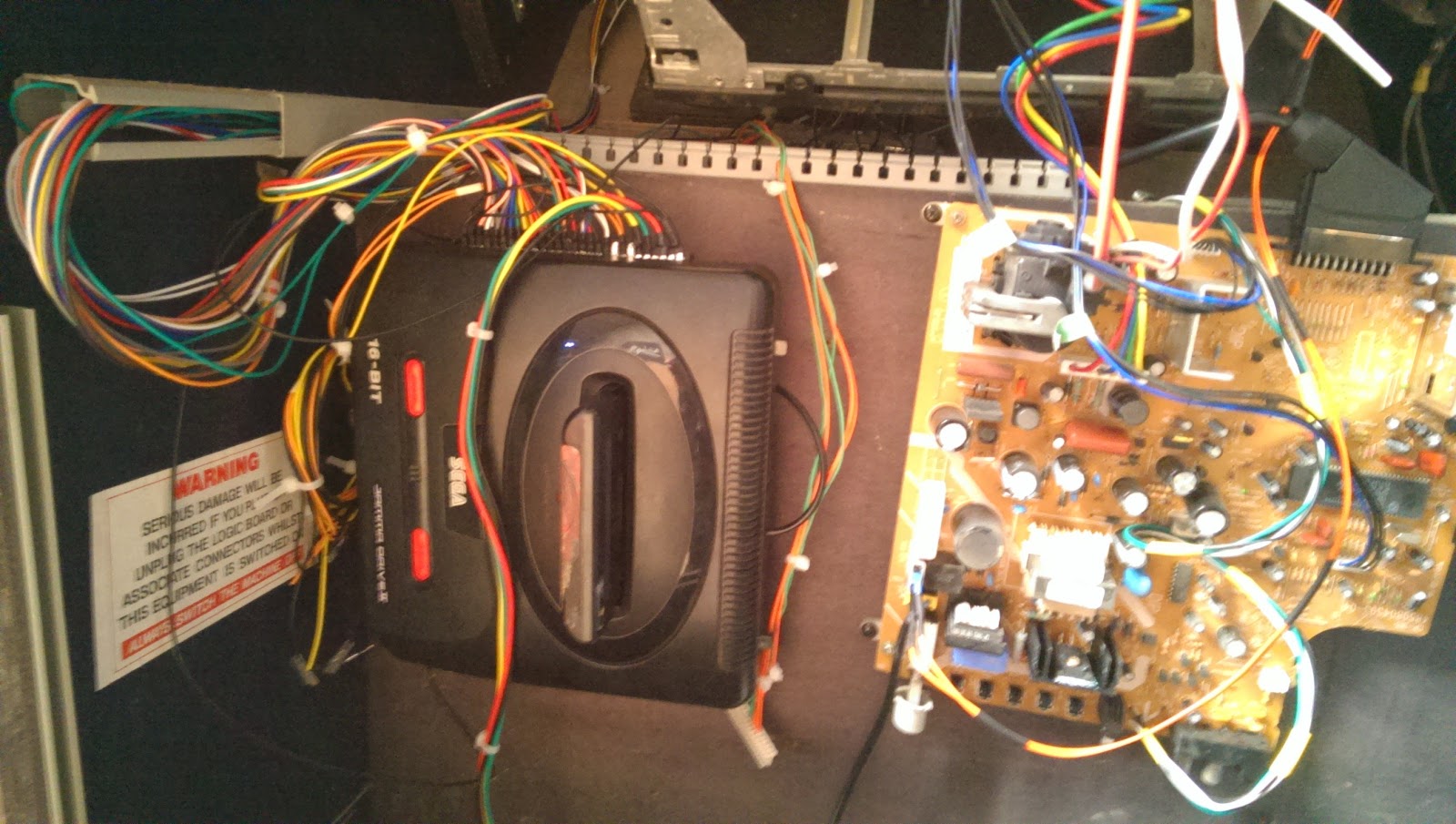 And here is the Jammadrive 2 sitting in place on the wooden wall. The way I positioned it is so the weight of the console pushes downwards onto the mounts of the base plate so it will keep in place and it also has the Jamma edge at a nice easy to access position. I've also mounted it quite high on the board so that I can still fit other arcade games in there past it so I don't have to take it out all the time to put other game boards in.

Im really pleased with how it sits in the cabinet I must admit and really happy that the baseplate worked after all my hacking of it (and my hand). 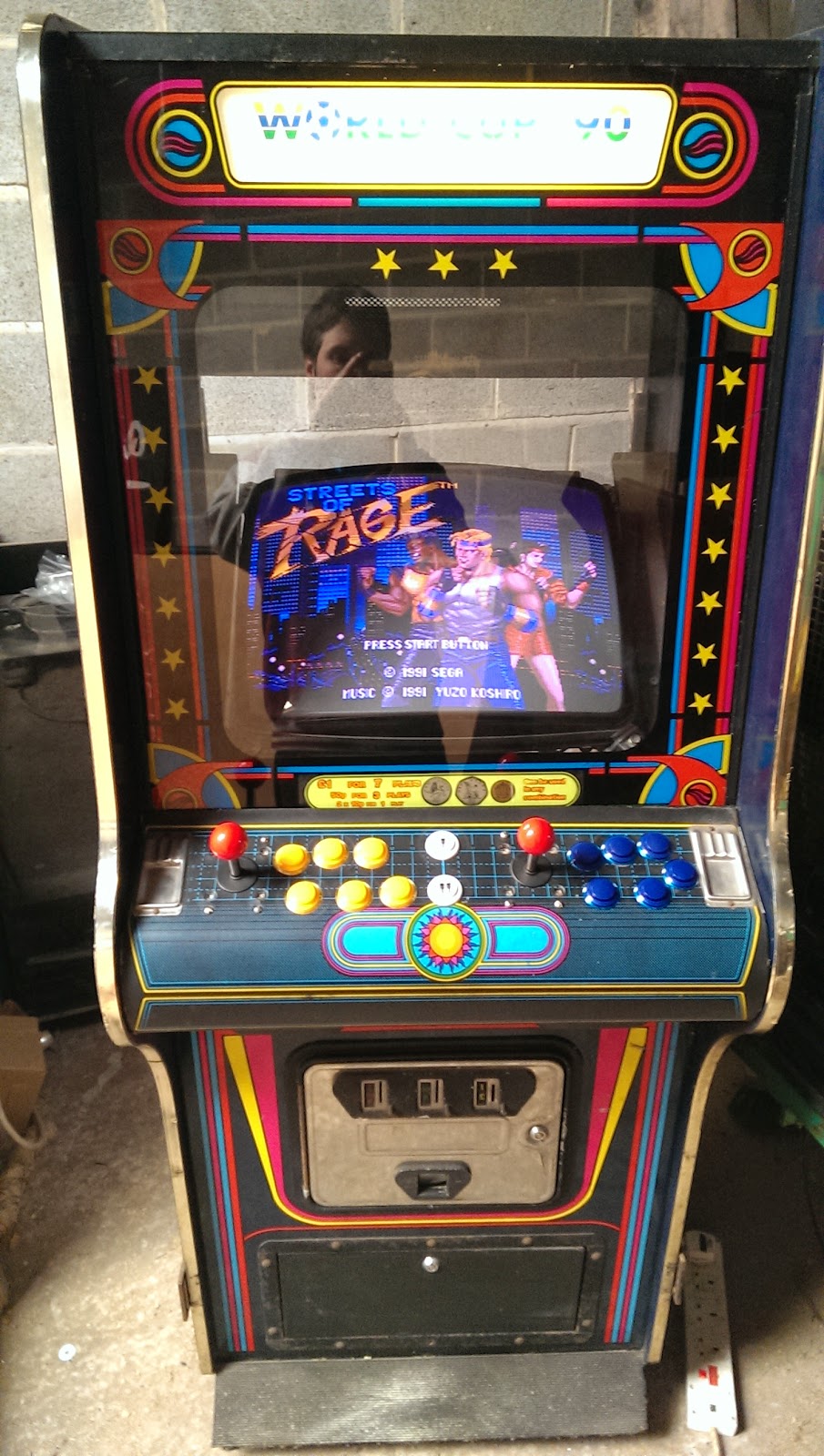 And here you can see the machine running Streets of Rage from the Sega Mega Games 6 cartridge. A neat little fact about this cart is that it has the full version of Streets of Rage on it so much that if you flick it over to Japanese language you get the game Bare Knuckle instead of Streets of Rage :D A good cart to test your language switch mods on ;-)

I thought I could leave this cart in the machine and there are a few games to have a blast on when there aren't any arcade boards plugged in.

Also its inspired me to dig some of my megadrive arcade converstions out of my shelves such as golden axe and I know its not technically an arcade game but its pretty close to the original, Splatterhouse 2.

Oh, I also painted up the old coin door that I mentioned in one or two of the video progress reports. Well it turns out after I painted it up that it didn't fit and wasn't the correct door!! Double dang it!

But I scratted around and found the proper one which is chrome and only needed a quick brush down to look half decent again. I mounted it into place and quickly tie-wrapped my Test Button to it but I'm going to extend the wiring on that so that its neater when you open the door.

And that's the progress so far. I'll leave you until the next post.